Mesenteric Lymphangioma with Small Intestinal Volvulus in an Adult

Copyright: © 2017 Chae H, et al. This is an open-access article distributed under the terms of the Creative Commons Attribution License, which permits unrestricted use, distribution, and reproduction in any medium, provided the original author and source are credited.

Lymphangioma occur commonly in the neck and axillae of pediatric patients, caused by an obstruction of the lymphatic flow because of congenital lymphatic malformation. However, mesenteric lmphangioma of the small intestine is a rare tumor that is seldom associated with small bowel volvulus, particularly in adult patients. Although rare, mesenteric lymphangioma can cause volvulus and intestinal obstruction by a torsion of mesentery. We report an unusual case of mesenteric lymphangioma with small bowel volvulus who was suffered from intermittent abdominal pain, treated with surgical resection.

Lymphangioma is a benign condition characterized by proliferation of the lymphatic space, resulting from blockage of regional lymph ducts. It is believed that lymphangioma is caused by a congenital malformation and obstruction of lymphatic system rather than a true neoplasm derived from lymphatic tissue [1]. It is usually found in the head and neck during childhood, with varying symptoms according to the location of development.

A 37-year-old woman was admitted to emergency services with abdominal pain. She had recently experienced epigastralgia and abdominal fullness for the several months. She was suffered from intermittent low abdominal squeezing pain for the past 2 weeks. The duration of pain was several minutes, and subsided spontaneously. At the day of visiting emergency room, she had felt severe abdominal pain for 2 hours, which was not subsided. She had no underlying medical disease, specific medication, trauma, or history of abdominal surgery. A physical examination revealed a mass in the left upper quadrant of the abdomen with tenderness, but no rebound tenderness. Laboratory data including tumor markers were within normal limits. A plain film of the abdomen showed several loops of the small intestine without dilatation or air-fluid level. Abdominal ultrasonography revealed a large, multilocular, cystic mass with an obscure margin. An abdominopelvic computed tomography (CT) scan was taken. CT scan showed a 9 × 7 cm, well-capsulated cystic mass located in the left upper side of abdominal cavity with whirling of the small bowel mesentery and dilatation of the proximal small bowel loops, which suggested volvulus of the small intestine (Figure 1). There were no signs of small intestinal ischemia, and the finding showed partial rather than complete obstruction. 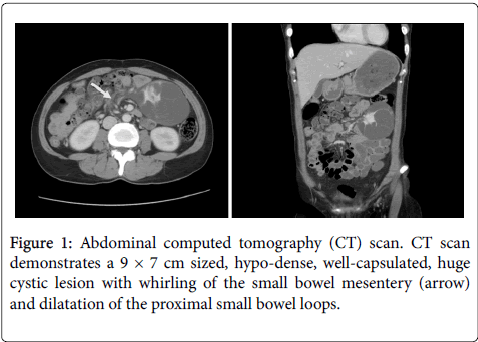 Although there was don evidence of small intestinal ischemia, we decided to perform emergent surgery because of intestinal obstruction due to mass lesion, and possibility of malignant disease. A median incision was made in the upper abdominal region under general anesthesia. At laparotomy, small bowel and its mesentery were twisted around the stalk of the mass and resolved spontaneously during the operation. A soft cystic mass was located in the mesentery of the jejunum, about 30 cm distal to Treitz’s ligament (Figure 2). The tumor was not adhered to the intestinal wall or adjacent organs. No ascites was seen in the peritoneal cavity. The tumor was resected completely by carefully dissecting the mesenteric vessels but without resecting the intestine. Figure 2: Operative findings show a yellowish cystic tumor with soft consistency arising from the mesentery of the jejunum. Small bowel and its mesentery are twisted around the stalk of the mass (arrow) and resolved spontaneously during the operation.

The specimen consisted of a 9 × 7 × 6 cm cystic tumor in the mesentery of the small intestine. The mass had a clearly distinguishable outer membrane, a smooth, polished surface, and signs of swelling due to the liquid it contained. The sectioned specimen contained serous liquid and a large swollen cyst. Small multi-septated cystic masses of various sizes were also situated along some of the thicker portions of the cystic wall (Figure 3). Figure 3: Gross finding of mesenteric lymphangioma of the small intestine. (A) The surgical specimen consists of a 9 × 7 × 6 cm sized cystic tumor with a clearly distinguishable outer membrane and a smooth, polished surface. (B) The cut surface reveals thin-walled multi-cystic spaces with some thickening of the cystic wall.

Pathological findings showed that the mass was comprised of a number of multi-septated cystic masses of varying sizes that were wrapped with flat lymphatic endothelial cells. Some lymphatic infiltration was found in the mass.

Immunohistochemical stain showed that the cells at the cystic wall reacted strongly to CD31, CD34, Factor VIII-R Ag, and D2-40 (Figure 4). Diagnosis of mesenteric lymphangioma of the small intestine was made according to the pathologic finding including immunohistochemistry. There was no postoperative problem without any complication. She recovered well and started to have soft meal at 3days after surgery. She was discharged uneventfully on postoperative day 9. She was doing well at the 3-month follow-up examination. Lymphangioma is a mass-forming lesion characterized by numerous thin-walled lymphatic spaces. The most common sites are the head, neck, and axillary regions. Other locations, such as the abdominal or mediastinal cavity, are rare, accounting for approximately 5% of lymphangiomas. Among these, lymphangioma of the small-bowel mesentery has been described in <1% of lymphangiomas [1].

The pathogenesis of lymphangioma remains unclear. Aberrant sequestration of certain lymphatic vessels during development has been suggested as a cause. Two hypotheses have been proposed for the etiopathogenesis of mesenteric lymphangioma. First, it is probably a congenital malformation that causes sequestration of lymphatic tissue during embryological development. This hypothesis explains why lymphangiomas occur primarily in children. Second, it has been suggested that abdominal trauma, lymphatic obstruction, inflammation, surgery, or radiation therapy can lead to secondary formation of a lymphangioma in adults. A mesenteric lymphangioma generally forms as a unilocular cystic mass without internal septa [5] and chronic intermittent volvulus may lead to venous and lymphatic congestion of the mesentery. Then, lymphatic drainage is compromised and intestinal obstruction may arise from a unilocular cystic lymphangioma.

Due to the nonspecific and varying presentation, preoperatively diagnosing a mesenteric lymphangioma can be challenging. Abdominal sonography shows a well-confined uni or multiloculated liquid-filled tumor with thin septations. The cystic content is usually sonolucent, but may be echogenic when intracystic bleeding or calcifications are present. An abdominal CT scan allows evaluation of the water density of the tumor, its relationship with neighboring organs, and definitions the mass effect on the intestines [8].

Although generally considered benign, Mesenteric lymphangiomas somtimes have poor prognosis because of rupture, leakage, or infiltration to adjacent organ, when their sizes are increasing continuously. Complete resection is the first-choice treatment for suspicion of a mesenteric lymphangioma. Some researchers have proposed intracystic injections of sclerosing agents for non-resectable lesions, when radical resection might be technically impossible [8]. Rarely, mesenteric lymphangioma can cause fatal complications, such as volvulus or involvement of the main branch of the mesenteric arteries requiring emergency surgery, particularly in adults [6]. In the present case, small bowel and its mesentery are twisted around the stalk of the mass, but resolved spontaneously during the operation. The tumor had not adhered to the wall of the intestine or adjacent organs. No ascites was seen in the peritoneal cavity and inflammatory changes were detected in the intestines or mesentery. The tumor was resected completely without resecting the intestine. No complications, such as leakage of lymphatic liquid, were seen after the procedure.