Copyright: © 2013 Ehsani N, et al. This is an open-access article distributed under the terms of the Creative Commons Attribution License, which permits unrestricted use, distribution, and reproduction in any medium, provided the original author and source are credited.

The effects of microwave hybrid heating on the densification and decomposition behaviour of four commercially available pre-calcined HAp powders (Plasma Biotal P81, P88, P120 and P149) and a bead milled HAp powder (BM16) were studied. The results were compared with conventionally sintered samples. Samples microwave heated to 1100°C for 10 min at 10,000°C.h-1 were 15 to 40% denser than the samples conventionally heated at same temperature for 60 min at 300°C.h-1. Microwave heating reduced densification temperatures and soak times by as much as ~150°C-200°C and ~57 min, respectively. Overall, the microwave sintering cycle was 20-30 times faster.

Hydroxyapatite [HAp] clearly has a great potential for biomedical applications because of its similarity in chemical composition and crystallographic structure to human hard tissue [1,2]. However, relatively poor strength and fracture toughness have restricted its extensive applications. A great deal of work has been done on the research and development of HAp ceramics as biomaterials [3-7]. One possible solution for improving the mechanical properties is microwave sintering of HAp [8-11].

Microwave sintering of HAp has been studied by Fang et al. [12-14] and Agrawal et al. [15]. They successfully made a number of transparent, white and porous HAp ceramics. Commercial microwave furnaces (500 and 1000 W) with cylindrical ZrO2 or rod-like SiC susceptors were used. Fully dense (100%) and transparent hydroxyapatite was produced by microwave sintering at 1100°C-1175°C [15], whereas conventionally produced samples from the same powder did not show complete transparency.

Microwaves form the part of the electromagnetic spectrum between radio waves and infrared light, occupying the frequency range 0.3 to 300 GHz, with the corresponding wave length range of 1 mm to 1 m [16]. Allocated frequencies for industrial, scientific and medical use are shown in Figure 1. Among these frequencies, only 9.15 MHz and 2.45 GHz are commonly used in industrial equipment [17]. Microwave heating results from the interaction between the microwaves and the material that is being heated, resulting in energy dissipation by various mechanisms [18,19]. 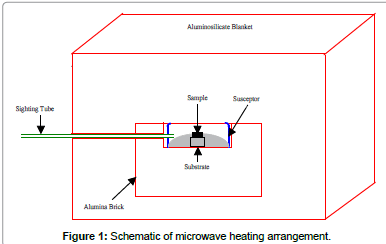 Microwave hybrid heating is a unique combination of conventional and microwave heating techniques, developed specifically for materials with low loss factor and low thermal conductivity [20,21]. Significant microwave heating problems can be solved by this novel technique [22-25]. In the MHH technique, a strongly microwave absorbent material is used as a susceptor to raise the temperature of a weakly microwave absorbent sample above the critical temperature (Tcrit). Once this temperature is reached, the sample can directly absorb microwave radiation. Therefore, at low temperatures the susceptor absorbs microwave energy and transmits heat into the sample by conventional heat transfer mechanisms, primarily radiation [20,26]. This technique facilitates the attainment of very high heating rates in a 2.45 GHz multimode microwave cavity [26]. Good temperature homogeneity can be achieved in large samples during MHH. MHH ceramics have shown greater microstructural uniformity and superior mechanical properties compared with conventional sintering using similar heating cycles.

The most common susceptor materials are SiC and ZrO2. YxNi1-xO compositions have recently been studied as a new susceptor material for high temperatures and oxidising conditions by Komarenko et al. [27]. Only pure NiO was found suitable as a microwave susceptor.

A cylindrical clay-bonded silicon carbide susceptor (Ø= 60 mm, h=20 mm) was positioned around the sample. The susceptor was placed inside an alumina brick (120 × 20 × 80 mm), which was surrounded by a layer (240 × 240 × 200 mm) of fibrous aluminosilicate insulation (Kaowool, Morganite Industrial Products, Sydney, Australia). This arrangement is shown schematically in Figure 1. For each experimental run, one sample was placed at the centre of the susceptor. The temperature was measured with an infrared pyrometer, which was calibrated during the cool-down cycle using a Pt - Pt13Rh thermocouple. A standard heating rate of ˜10,000°C.h-1 and soak time of 10 min were used. The mode stirrer was used at all times to produce a more uniform microwave field distribution across the cavity.

Conventional heating: An electric furnace (300 × 200 × 120 mm) with SiC elements (Gallenkamp, London, UK) was used for the conventional heating of the control samples. A standard heating rate of 300°C.h-1 (the furnace maximum) and soak time of 60 min were used in all cases. No serious overshooting was observed by such a high heating rate. Two sets of experimental trials were carried out.

Comparative densification and decomposition behaviour: Pellets from each of the HAp powders were sintered at a range of temperatures from 900°C to 1400°C in 100°C steps by microwave and conventional heating. After sintering, the apparent density and %HAp yield of the pellets were measured according to the methods described by Ruys et al. [29].

The densities attained after sintering at 1100°C using microwave and conventional sintering are shown in Figure 7. These data show that microwave heating significantly improved densification for each of the powders trialled. Overall, the improvement in densification by microwave heating at 1100°C was of the order of ˜11-30%. Although the soaking time for the microwave and conventionally processed samples are different, the comparison is valid below the composition temperature, where no decomposition occurs. At higher temperature, however, using identical soaking times would be more reliable. 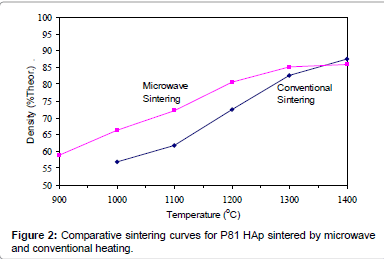 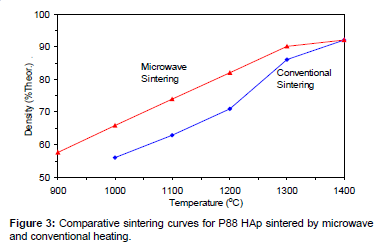 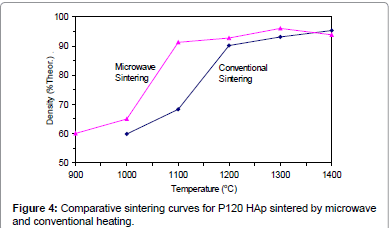 Therefore the main difference between microwave and conventional heating in this trial was the fact that densification occurred at lower temperatures for the former. This is advantageous in the case of HAp since lower sintering temperatures reduce the risk of decomposition. Therefore, it appears that microwave sintering offers a solution to the problem of trying to achieve maximal densification of HAp without the decomposition.

High diffusion rate: It has been suggested that the lower sintering temperatures and the higher sintering rates during microwave heating are caused by enhanced diffusion rates induced by the electric field [42-45]. The diffusion rate enhancement by microwaves has been reported for several materials [44-48]. It has also been found that the diffusion rates were dependent, at least in part, on the input power level. Janney and Kimery [41] found that the activation energy for diffusion of 18O in sapphire was 410 kJ/mol for microwave heating and 710 kJ/mol for conventional heating. The presence of a microwave effect in the single crystal suggests that there would be a significant direct interaction between the crystals in polycrystalline ceramics and microwaves, and so microwave coupling cannot be attributed solely to grain boundary effects.

Preferential grain boundary coupling: Grain boundary coupling could have an important effect on the microwave sintering of ceramics. It has been suggested that the enhanced densification of ceramics by microwave sintering could be caused by accelerated diffusion rates within the grain boundaries [49]. This would be caused by preferential interaction of the microwaves with the interfaces, leading to higher temperatures in these regions. Several different mechanisms have been proposed for this temperature heterogeneity. 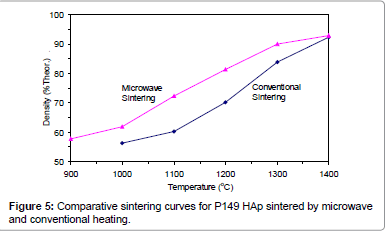 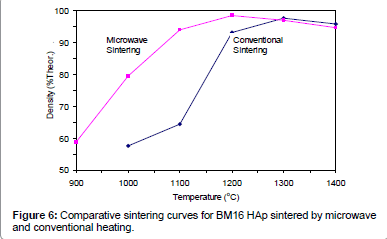 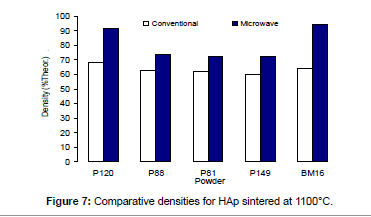 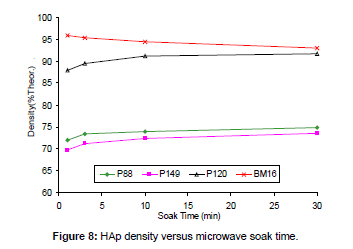 This theory has been confirmed by Tiegs et al. [56-59], who have shown that preferential coupling of microwaves with the grain boundaries in microwave heated Si3N4-based ceramics leads to improved densification. Ferber et al. [60] established that the improved creep resistance of microwave-heated (Si3N4-6Y2O3-2Al2O3) was due to the preferential coupling of microwave radiation with the intergranular phases. It has been suggested that relatively small temperature gradients across the grains can induce a driving force to encourage densification [54].

Effect of microwave soak time: A number of combinations of powder type and soak time were trialled at a soak temperature of 1100°C. The results are shown in Figure 8. These data indicate that, for three pure HAp powders (P88, P120 and P149), increasing soak times led to a slight improvement in densification level, although little improvement occurred for soak times above 3 to 10 min. Therefore, a 3 min soak time at 1100°C was all that was required for effective densification. This suggests that increasing the soak time at temperatures below Tonset will increase the density only marginally.

This was confirmed by the decomposition data, which show that the %HAp yield decreased with respect to soak time from 82.5% (1 min soak) to 78.9% (3 min), 76.3% (10 min) and 72.1% (30 min). Therefore, it can be assumed that increasing soak times will increase the density only at temperatures below Tonset. Excessive soak times at temperatures above Tonset will in fact be detrimental and decrease density through decomposition effects.

3. Enhanced densification and lower sintering temperatures compared to conventional heating are assumed to be due to a) enhanced diffusion rates induced by the electric field and b) preferential grain boundary coupling with microwave radiation.

4. Owing to the preferential grain boundary coupling mechanism, densification enhancement by microwave heating (compared with conventional heating) was more pronounced when the powder was finer. It was ˜30% for the fine powder (BM16) and ˜11% for the coarse powder (p88).

5. The %HAp yields of the samples sintered by microwave and conventional heating were slightly lower for microwave sintering than for conventional sintering. However, the effect of microwave heating on densification was much more significant than that on decomposition.

7. Overall, the microwave sintering cycle was 20-30 times faster than for conventional sintering.