Copyright: © 2014 Dan D, et al. This is an open-access article distributed under the terms of the Creative Commons Attribution License, which permits unrestricted use, distribution, and reproduction in any medium, provided the original author and source are credited.

Presentation of Case: A 66 year old, hypertensive, diabetic patient with previous gynaecological surgery presents with symptoms of intestinal obstruction for 2 days. Clinical & radiological features are consistent with the diagnosis of SBO. Conservative treatment was started but the patient failed to show any signs of resolution. Laparoscopic adhesiolysis was successfully performed on thin adhesions between the liver and the anterior abdominal wall (possible Fitz-Hugh Curtis syndrome), which trapped the small bowel. The patient was discharged on day 4 of admission.

Discussion: ASBO is a very common and actual disease and its management deserves great attention. Although surgeons are hesitant to perform laparoscopy in patients with distended small bowel due to adhesive obstruction, laparoscopic surgery performed by experienced surgeons offers the opportunity of shorter hospital stay, quick recovery and less morbidity, including wound sepsis and incisional hernia when compared with laparotomy.

Conclusion: Minimally invasive surgery (MIS) in ASBO is not standard of care, however, selected patients may benefit from the advantages of this approach. Once the necessary expertises are available, an attempt to treat these patients with MIS may be safe, and as such, should be entertained.

The management of ASBO has been affected by a radical change in the spectrum of conservative measures, predictive models to indicate the need for surgical intervention [1,2] and now MIS. MIS in the management of acute small bowel obstruction has been shown to be a feasible and advantageous option [3], however, its acceptance is still in an infantile stage and widespread application is still not observed. Many authors place emphasis on whether a procedure can be completed laparoscopically, and failure is based on the need to convert to an open operation [4]. We advocate a change in perspective and view laparoscopy as an initial step in the optimal management of ASBO.

There is no investigation that clearly identity’s patients with ASBO who may benefit from minimally invasive surgery. Patients with single adhesion bands can only be spared unnecessary laparotomy by identifying them with an initial laparoscopic approach. The benefits of MIS include shorter operative times, less adhesion formation, fewer wound complications, such as infection and incisional hernia formation, quicker recovery, shorter hospital stay, and less pain [5]. Many authors have stated that laparoscopic adhesiolysis is feasible and convenient if performed by skilled surgeons on selected patients [3,5-8]. Emergency laparoscopy is also being practiced on a regular basis by experienced surgeons, allowing more patients to reap the benefits of minimally invasive surgery [9]. Therefore, these patients should be directed to experienced laparoscopic surgeons for optimal management.

This is the case of a 66 year old diabetic, hypertensive woman who presented with colicky abdominal pain, bilious vomiting and constipation for 48 hours. Previous surgical history includes total abdominal hysterectomy and bilateral salpingo-oophorectomy 20 years ago and a cesarean section at the age of 27 years by way of a Pfannensteil incision. She suffered one episode of ASBO 10 years ago, which was managed conservatively. She has been relatively well except for repeated bouts of renal colic secondary to kidney stones. On examination, she was mildly dehydrated with normal vital signs and her abdomen was distended, soft and mildly tender in the upper abdomen. Complete blood count was normal and her abdominal X-rays showed dilated small intestines with air-fluid levels, which were located mainly on the left upper quadrant. The diagnosis of ASBO was made and initial conservative management consisted of nasogastric tube (NGT) decompression and intravenous fluid resuscitation, while the patient was kept nil orally.

After 24 hours she did not pass any flatus and her abdomen was still distended but without any signs of peritonitis. CT scan of the abdomen was done, which revealed dilated proximal bowel loops with distended loops over the liver (Figures 1 and 2). She was given 50 milliliters of water-soluble contrast via the NGT and abdominal X-rays were repeated at 4 and 12 hours afterwards. On both occasions no contrast was noted in the large intestine and it appeared to be held up in the small bowel. At this point the decision was made to abandon conservative management and embark on operative management using a minimally invasive approach. 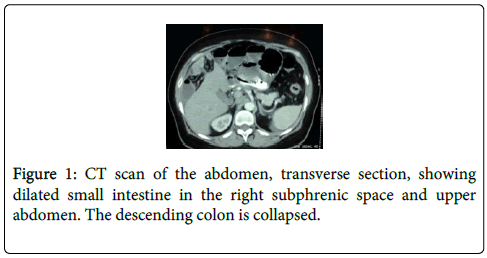 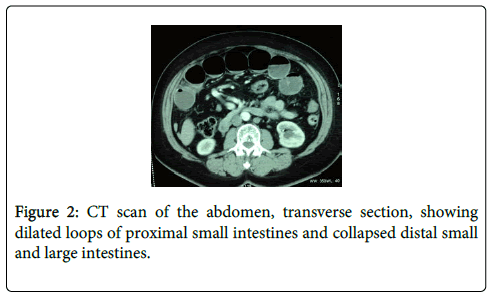 Access to the peritoneal cavity was safely obtained using optiview technique with a transparent 12 mm port, at an alternate site (right mesogastric region). The pneumoperitoneum was created and set at 12 mmHg. Inserting the laparoscope revealed collapsed distal small bowel and dilated proximal small bowel (Figure 3). On inspection of the peritoneal cavity dilated small intestine was found trapped behind a thin network of perihepatic adhesions, similar to those seen in Fitz-Hugh Curtis syndrome (Figure 4). The distal small intestine was collapsed and there were no pelvic adhesions. Two 5 mm ports were inserted under direct vision on the left side of the abdomen and the adhesiolysis was performed using sharp dissection with an endoshears. The entire small bowel was then inspected and no other abnormality was found. The patient had an uneventful recovery and she was discharged by the 2nd post-operative day, making her entire hospital stay approximately 4 days. 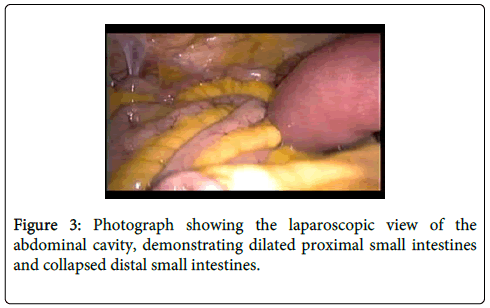 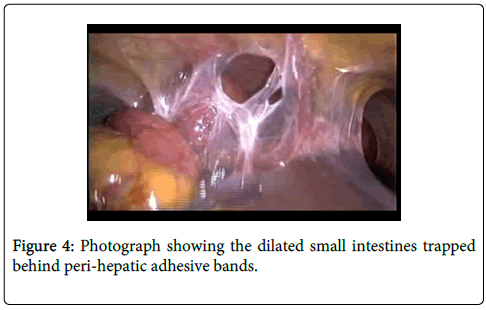 ASBO is a very common and actual disease and its management deserves great attention within the current literature and authors should attempt to approach this entity laparoscopically [9]. Studies show that while the feasibility of diagnostic laparoscopy is high (60-100%), that of therapeutic laparoscopy is low (40-88%) [3]. However, laparoscopy has been shown to decrease the incidence, extent, and severity of intra-abdominal adhesions when compared with open surgery, thus potentially decreasing the recurrence rate for adhesive small bowel obstruction [10,11]. There seems to be an advantage above laparotomy in terms of adhesion formation to the abdominal wall and to the operative site [12]. Laparoscopic adhesiolysis for small bowel obstruction has a number of potential advantages: (1) less postoperative pain, (2) quicker return of intestinal function, (3) shorter hospital stay, (4) reduced recovery time, allowing an earlier return to full activity, (5) fewer wound complications, and (6) decreased postoperative adhesion formation [5].

Initial conservative management of ASBO has been well established. According to the Bologna guidelines [13], in the absence of signs of strangulation and history of persistent vomiting or combined CT scan signs (free fluid, mesenteric edema, small bowel faeces sign, devascularized bowel), patients with partial ASBO can be managed with non-operative management (NOM) and tube decompression (either with long or NGT) safely and this should be attempted. These patients are good candidates for Water Soluble Contrast Medium (WSCM) with both diagnostic and therapeutic purposes. The use of WSCM for ASBO is safe and reduces need for surgery, time to resolution and hospital stay. There is excellent data showing that the use of Gastrografin in ASBO has been able to achieve these goals [14]. Branco et al. as well found that the appearance of WSCM in the colon within 4-24 hours after administration, accurately predicts resolution of ASBO with a sensitivity of 96 percent and specificity of 98 percent [15]. Although NOM can be prolonged up to 72 hours in the absence of signs of strangulation or peritonitis, the optimal length of a non-operative trial for patients with acute ASBO remains controversial [13]. We opted for surgical intervention earlier because our patient did not show any signs towards resolution with the NOM.

Open surgery is the preferred method for surgical treatment of strangulating ASBO as well as after failed conservative management. In selected patients and with appropriate skills, laparoscopic approach can be attempted using open access technique, preferably in cases of first episode of ASBO and/or anticipated single band adhesion (i.e. ASBO after appendectomy or hysterectomy) [13]. Peritoneal access and trocar injury to the distended bowel are major concerns regarding the feasibility of laparoscopic adhesiolysis. Therefore, the initial trocar should be placed away (alternative site technique) from the scars in an attempt to avoid adhesions [16].

Although alternative site entry can be performed with either an open (Hasson) or blind-access (Veress needle) technique, the open approach is more prudent in cases of laparoscopy for ASBO. Sato et al. [17] reported using the Veress needle in 16 patients without a single complication. The importance of confirming the position of the needle with the saline drop test and monitoring the pressure during insertion of the Veress needle was emphasized. In contrast, Levard et al. [18] reported a 3.7% incidence of intestinal perforation using a blind-access technique in cases of bowel obstruction. The open technique allows the identification of adherent bowel and dissection of the bowel away from the abdominal wall. Some surgeons routinely perform a preoperative ultrasonographic mapping of visceroparietal adhesions, in order to avoid lesions resulting from Veress' needle insertion. The open technique does not completely eliminate the risk of bowel injury, however, it does allow the surgeon to promptly identify and repair any injury that may occur [5,17]. Finally, there have been no reports of vascular injuries with the open technique, as have been described with the blind access technique. The disadvantage of the open technique is the increase in operative time, particularly in obese patients [13].

Another technique that has gained favor is the use of optical access trocars. In experienced hands, optical access trocars are safe and facilitate rapid entry into the peritoneal cavity. String et al. [19] reported their use in 650 patients, with a mean entry time of 77 seconds and a complication rate of 0.3%. With this technique a 0-degree laparoscope is inserted through the transparent cannula as the trocar is advanced through the abdominal wall, thereby visualizing each tissue layer of the abdominal wall. The advantage of this technique is that it allows you to identify the bowel wall before inserting the trocar into the bowel. Furthermore, if an injury does occur, it is recognized at that time and managed appropriately. This is the technique used in the case presented.

The laparoscopic approach is ideal in patients with ASBO who do not have extensive prior abdominal surgeries. The cause can be confirmed, and frequently unexpected pathology can be addressed using advanced laparoscopic skills [20]. Our patient exhibited obstructive symptoms from right upper quadrant adhesions most likely due to Fitz-Hugh-Curtis syndrome. Although the definitive cause of her ASBO remains undetermined, this entity has been reported a few times in the literature as a cause of ASBO and it is considered to be rare [20-22]. Based on the radiological findings, Chilaiditi syndrome was also entertained as a differential diagnosis, however, this finding is typically incidental and occurs in males [23]. Unfortunately, many of these patients have no documented history of pelvic inflammatory disease, and the diagnosis is made at exploration by finding adhesions between her diaphragm and liver. In any case, the successful laparoscopic management of this patient lends credence to the laparoscopic management of ASBO.

Although surgeons are hesitant to perform laparoscopy in patients with distended small bowel due to adhesive obstruction, laparoscopic surgery can be safely performed and offers the opportunity of shorter hospital stay, quick recovery and less morbidity, including wound sepsis, incisional hernia and the formation of less adhesions when compared with laparotomy.

Written informed consent was obtained from the patient for publication of this case report and accompanying images. A copy of the written consent is available for review by the Editor-in-chief of this journal on request.