Copyright: © 2015 Liu T et al. This is an open-access article distributed under the terms of the Creative Commons Attribution License, which permits unrestricted use, distribution, and reproduction in any medium, provided the original author and source are credited.

Objective: To investigate both fine and gross motor proficiency in preschool children enrolled in Head Start in comparison to their age-matched typically developing peers. Methods: Thirty-seven children from a local Head Start program and 37 typically developing children participated in this study. Movement Assessment Battery for Children-2 (MABC-2) was used to assess children's fine and gross motor performance in manual dexterity, aiming and catching, balance, and the child's overall motor performance. A one-way MANOVA was used to analyze the group differences on MABC-2 percentile scores for each subtest and the overall performance with the alpha level set at p <. 05. Results: The results revealed that the Head Start children performed significantly poorly than their age-matched typically developing children on balance, F (1,72)= 26.032, p<.01, and the total percentile score, F(1,72)=10.455, p<. 01. Conclusions and implication: It is suggested that future educators should design interventions with broader subset of skills to maximize motor proficiency for the economically disadvantaged preschool children to prevent long-term negative consequences associated with motor delays.

Motor proficiency is essential in early childhood for overall motor development and considered as the basis and building blocks of more complex movements skills [1,2]. Critical ages for children to develop motor proficiency occur between ages two and seven with the ideal age being three or four [3]. Children who are more proficient in motor skills are more likely to actively participate in physical activities and in more advanced sports skills [4,5]. In addition, young children who are physically active are more likely to maintain health-related fitness throughout adolescence and adulthood [6]. With age, sports and game play becomes more complex and fundamental movements are required in order to participate. Children without motor proficiency may have a harder time keeping up with their peers and might make them less likely to participate. Children do not "grow out" of motor difficulties naturally; they have to develop the motor proficiency. Otherwise, children's physical activity, fitness, and motor skill might decline as they enter adolescence [7]. The absence of both fine and gross motor proficiency may negatively impact children's relationships with peers as well as their participation in future physical activity. For example, Thompson et al. [8] found that skill development, social interaction, and health were at risk in children with movement difficulties.

The Individuals with Disabilities Act part A and B [9] suggests that motor skill data can be used to determine the presence of developmental delay for preschool children. In the past decade, there has been a plethora of research demonstrating that young children who are economically disadvantaged show significant delays in gross motor skills such as locomotor and object-control skills. For example, Goodway et al. [10] examined gross motor proficiency using the Test of Gross Motor Development-2 (TGMD-2) [11] with 469 disadvantaged Hispanic and African American preschoolers in the Midwest and Southwest. The results showed that the majority of preschoolers scored between the 10th and 17th percentile for locomotor skills and the 16 percentile for object-control skills. In addition, Pope et al. [12] assessed object-control skills in 111 Hispanic children enrolled in a Head Start program using TGMD-2 and found 83% of the preschool-aged children scored in the poor performance category, which was below 25th percentile. Similar findings of the motor proficiency delays in object and locomotor skills have been noted in intervention studies with preschool children prior to the intervention [13-15].

Although gross motor skills are important, so is the development of fine motor skills. Fine motor skills are essential in writing because they help form letters and numbers accurately and "can only be produced by proper timing and force control of coordinated arm, hand, and finger movement" [16]. Pienaar et al. [17] reported a strong relationship between math, reading, writing performance and motor proficiency in boys and girls in disadvantaged children in South Africa. Children with lower motor proficiency had poor performance in these academic areas. Hand strength and visual-motor development can directly affect writing and is found to be more challenging in children from low socioeconomic (SES) backgrounds [18]. Lust and Donica [19] implemented a pre and post motor intervention with a Handwriting Without Tears-Get Set for School Program to assess the relationship between handwriting and fundamental motor performance in low SES children enrolled in Head Start. They found significant improvements in handwriting readiness skills for children in low SES after the intervention. This finding suggests that a handwriting curriculum, in conjunction with fine motor training can significantly improve Head Start children's academic performance and school readiness [19].

Nationally, efforts to influence policy, practices, and guidelines of physical activity programs have been established. However, few comprehensive studies on the developmental delays in fine and gross motor skills with the Head Start children have been noted. Therefore, the purpose of this study was to investigate both fine and gross motor skill performance in preschool children enrolled in Head Start and their typically developing age-matched peers. It was hypothesized that the children enrolled in Head Start would perform poorly and show motor delays when compared to their age-matched typically developing children on MABC-2.

Thirty-seven preschool children from Head Start (80% Hispanic) and 37 age-matched typical developing children participated in the study. Head start is a federal program that primarily serves children and their families from a disadvantaged socioeconomic status (i.e., low SES) in early childhood development [5,26]. Low SES is defined by the U.S. Census Bureau [27] as a family that falls below the poverty line and the family's income is less than the average family's threshold and attending day care setting not qualifying for subsidy. Typical families are defined as being above the poverty line. Parental consent was obtained prior to each child's motor assessment. Participants’ demographic information is presented in Table 1. The University internal review board approved this study.

Verbal descriptions along with accurate demonstrations for each MABC-2 task were given to the participants prior to their skill performances. Instructions were given in Spanish or English for each child to make sure directions were understood. A practice trial was then provided and feedback was given if the child made mistakes during the practice trial. Additional demonstration and practice were provided when the child did not understand what needed to be done. The primary investigator and a research assistant administered the test at a local school gym according to the MABC-2 Manual and then evaluated each child's performance for each task. Each child's performance was videotaped and reviewed by the investigator and her assistant for an accurate assessment if the score was not initially agreed upon. A high inter-rater reliability of 99% was obtained between the primary investigator and her research assistant in the MABC-2 tasks.

Descriptive statistical analysis was used to describe children's fine and gross motor performance. MABC-2 percentile rank from each area (i.e., manual dexterity, aiming and catching, balance), and total percentile score (overall performance) was calculated for both Head Start and the typically developing children groups. A one-way MANOVA was used to analyze the group differences on MABC-2 percentile scores for each subtest and the overall performance. The alpha levels were set at p<. 05.

The MANOVA analysis on percentile scores (i.e., manual dexterity, ball skills, static and dynamic balance, and total percentile score) revealed a significant difference between the Head Start children and their age-matched typically developing children on the balancing subtest, F (1, 72)=26.032, p<.01. A significant between group difference was also found for the total percentile rank, F (1,72)=10.455, p<.01. These findings indicated that Head Start children performed significantly lower on one (balance) of the three main subtests (manual dexterity, aiming and catching, and balance) and they were outperformed by their age-matched typical peers on those fine and gross motor skills. 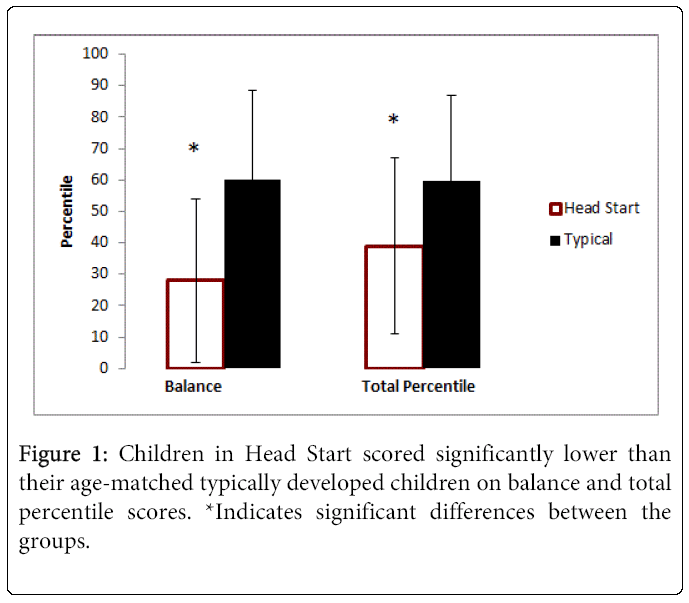 The purpose of this study was to investigate motor proficiency of children enrolled in Head Start program in comparison to their agematched typically developing peers. The findings supported our hypothesis that the children in the Head Start program performed significantly worse than their age-matched typically developing peers on balance and overall percentile rank. There is no known research that examines motor skill performance between Head Start and typically developed age-matched peers on MABC-2, which makes our findings unique. Motor proficiency of fine and gross motor skills is important because fine motor skills have been shown to affect children's kindergarten academic performance while gross motor skills are shown to help with skill development, physical activity, and healthy life style [8,16,28]. In addition, competence in motor proficiency increases the likelihood that children will become active and maintain health-related fitness in adolescence and into [4-6].

There are important implications for the findings in this study. First, it is important to have a complete understanding of both fine and gross motor delays in children enrolled in Head Start. More research is needed on these children to provide comprehensive developmental profiles in comparison with their peers. Previous research has been limited to report gross motor delays in economically disadvantaged preschool children [10,13,15]. Our findings show that Head Start children scored significantly below their age-matched peers in the areas of balance, gross and fine motor skills. A second implication is that gross motor delays are often attributed to lack of instruction, experience, feedback and opportunity [15,29,30]. It is suggested that an impoverished environment could also lead to low motor proficiency in Head Start children. An impoverished environment for fine motor development could be a lack of materials at home such as scissors, pencils, and paper. The third implication is that more comprehensive interventions focusing on both fine and a gross motor skill development are needed for Head Start prekindergarten programs. Interventions targeting gross motor performance in children who are economically disadvantaged have resulted in significant improvements in motor proficiency following the interventions [13,15,31]. Other researchers have found improvements in gross motor skills can help facilitate social interaction and also increase participation in learning advanced motor skills [5,32,33]. The results of this study recommend preschool educators to include fine motor skills in the interventions to maximize motor proficiency in Head Start program. In addition, the benefits of fine motor skill intervention are not limited to improvements in motor proficiency. They have been shown to affect math and reading performance [28]. Educators and practitioners can add a handwriting curriculum in conjunction with fine motor training in the intervention program to improve Head Start children's academic performance and school readiness [19]. Future studies may include an academic component as well as a fine and gross motor skill component between Head Start and typically developing children to determine the level of academic and motor performance differences between the two groups.

In summary, preschool children enrolled in Head Start program were delayed in the motor proficiency when compared to their typically developing children. This delay could negatively impact their academic performance, physical activity, and health-related fitness later in life. It is suggested that future educators should design interventions with broader subset of skills to maximize motor proficiency for the economically disadvantaged preschool children.