Copyright: © 2017 Badam TK, et al. This is an open-access article distributed under the terms of the Creative Commons Attribution License, which permits unrestricted use, distribution, and reproduction in any medium, provided the original author and source are credited.

Sarcomas are neoplasms (less than 1% of all types of cancer) that arise from the muscles, endothelium and cartilage. The incidence of malignant sarcomas is as low as 1.5 per 100,000 population, which is approximately 8000 new cases per year in the United States of America [1].

Chondrosarcomas are tumors that develop mostly between the fourth and sixth decades of life and account for approximately 20–25% of bone sarcomas.

Chondrosarcoma of the bone is 3rd most common primary malignant tumour of bone, preferentially affecting scapula and pelvis, but may also affect the diaphyseal parts of the long bones like proximal femur, proximal humerus and distal femur [2,3].

Chondrosarcomas of small bones of hand and foot are rare [4,5]. Among the chondrosarcomas affecting the foot, calcaneum is most commonly affected [6,7]. Of which most of them are conventional type of chondrosarcoma [6].

We are reporting an unusual case of myxoid chondrosarcoma of bone occurring at an unusual site (Calcaneum) with an unusual presentation.

A 79 year old male patient presented with complaints of swelling in the postero-medial aspect of the left ankle for 2 years. It was insidious in onset and gradually progressing in size. In the last 2 months, it was associated with pain.

No history of fever or trauma or loss of weight/appetite. On examination, well-defined globular swelling was present on the posteromedial aspect of the left ankle of 8 × 5 cm in size with no signs of inflammation (Figure 1). 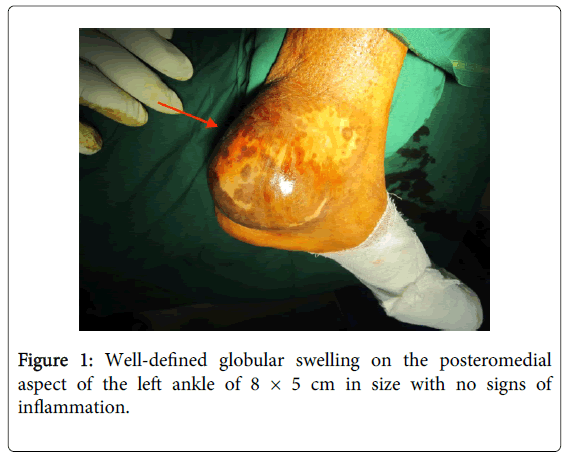 Figure 1: Well-defined globular swelling on the posteromedial aspect of the left ankle of 8 × 5 cm in size with no signs of inflammation.

Swelling was non-tender, firm in consistency and adherent to underlying structures, but skin was free. X-ray was taken which showed well-defined osteolytic lesion without marginal sclerosis in the postero-superior aspect of the calcaneum, without any calcification (Figure 2). 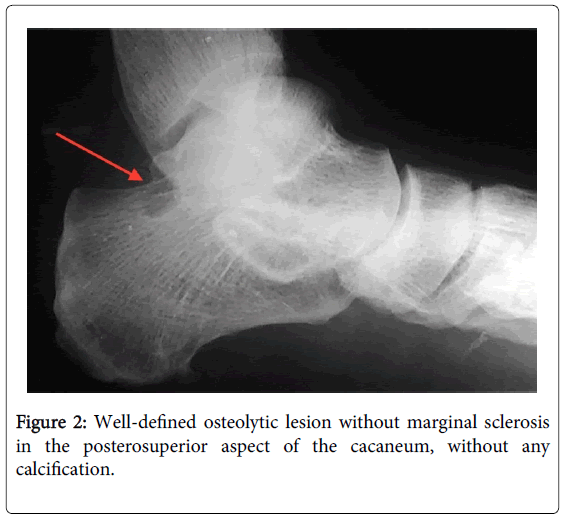 Figure 2: Well-defined osteolytic lesion without marginal sclerosis in the posterosuperior aspect of the cacaneum, without any calcification. 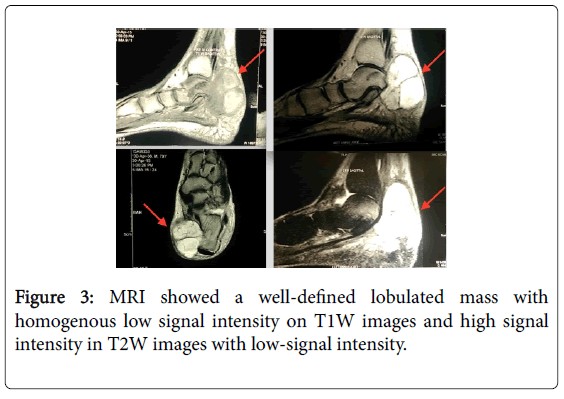 The contrast enhanced T1W images showed no enhancement of the mass (Figure 4). 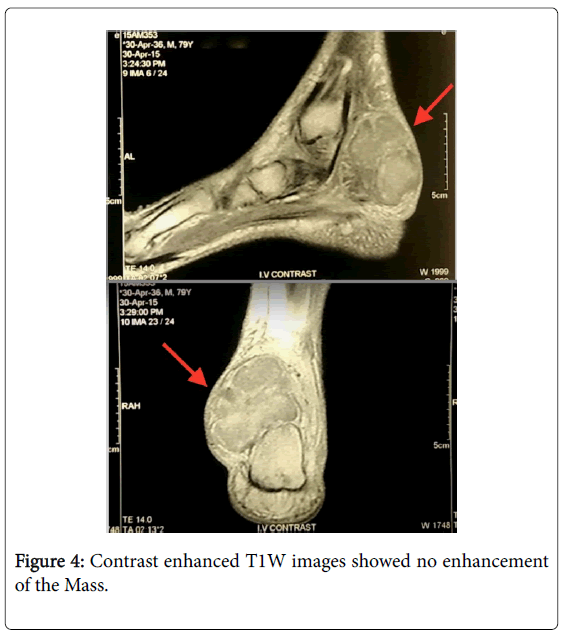 For the histopathological diagnosis, excision biopsy was done. Intraoperatively, the mass was gelatinous and myxomatous arising from the medial aspect of postero-superior part of the calcaneum (Figure 5). 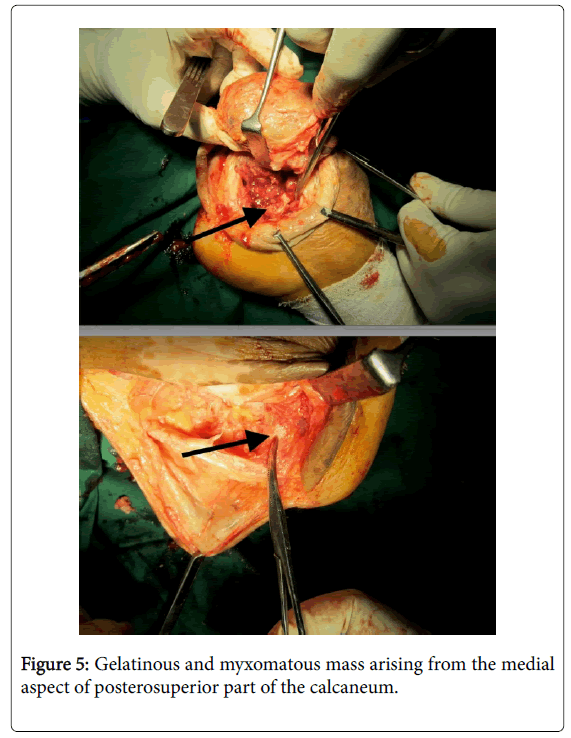 Figure 5: Gelatinous and myxomatous mass arising from the medial aspect of posterosuperior part of the calcaneum.

On gross examination, external surface was lobulated, cut surface was solid gelatinous and congested with tumour, 0.1 cm away from the peripheral margins (Figure 6). 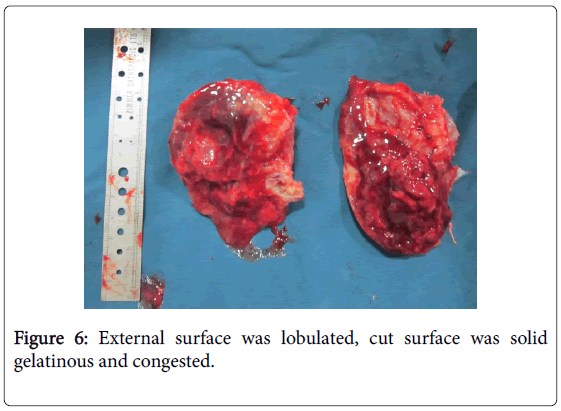 On microscopic examination, lobular architecture with cellular atypia and abundant myxoid matrix, lobular cartilage with focal mineralization, spindle cells with moderate eosinophilic cytoplasm, oval hyperchromatic nuclei and fine chromatin. Tumour showed minimal pleomorphism with 0-1 mitosis/10HPF and 50% necrosis (Figure 7). It was reported as Grade II Myxoid Chondrosarcoma arising from Calcaneum. CT Scan of chest was done and distant metastasis was ruled out. Immunohistochemistry was not done as the patient was not willing for further investigations. As it was Grade II, limb salvage might cause recurrence of the lesion, so trans-tibial amputation was done after counselling the patient. No radiotherapy or chemotherapy was given as the chondrosarcoma would be resistant for them. Patient is on 15 months of follow-up with no recurrence of lesion in proximal site. He is comfortable with his daily activities of living using PTB prosthesis. 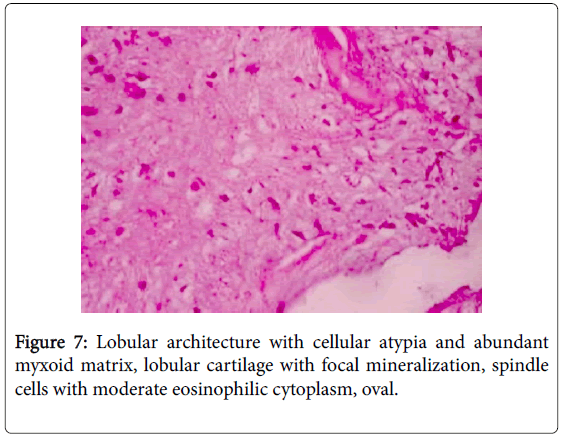 Chondrosarcomas are malignant bone tumours that characteristically produce neoplastic cartilagenous tissue. It is the 3rd most common primary malignant tumour of the bone, with a high incidence between the fourth and sixth decades of life [2,3]. The frequency of occurence of chondrosarcoma is pelvis and ribs-45%, ilium–20%, femur-15%, humerus-10% and others-10% [12]. Small bones of hand and feet are very rarely involved. Among the chondrosarcomas affecting the bones of the foot, those that affect the calcaneus are more common [6,7].

In Calcaneal chondrosarcoma, majority of them are conventional chondrosarcoma. Myxoid variant of Chondrosarcoma involving bone is an unusual neoplasm with very few cases reported. Myxoid chondrosarcoma usually seen in the proximal femur and around the hip, involvement of calcaneum is extremely rare, unusual site, with only four cases being reported in the English literature.

Calcaneal chondrosarcoma is a radiological diagnosis. Several methods can be used for detecting these neoplasms, like radiography, computed tomography (CT) and magnetic resonance imaging (MRI). Conventional radiograph will show osteolytic lesion with “rings or arc like” calcification of chondroid or cartilaginous matrix. Radiologically, if the tumour is more radio-transparent, there is a high likelihood that it will be of high-grade. Low-grade tumors cause reactive thickening of the cortex, while high-grade tumours are more aggressive and will destroy the cortex forming a soft tissue mass [13]. In our case, we had an unusual presentation, in which the radiograph showed well-defined osteolytic lesion in the postero-superior aspect of the calcaneum without calcification, as myxoid matrix was resistant to calcification leading to difficulty in diagnosing a cartilaginous tumour. Similar benign looking radiological appearance was seen by Kwon [10] and Joshi [11], whereas others described aggressive appearances [8,9].

CT is a good method for diagnosing chondrosarcomas due to highquality images and reduced levels of artifacts for identifying the pattern of bone destruction and the presence of matrix mineralization. MRI is used for the extent of intraosseous and soft tissue involvement. Large unmineralized soft tissue mass associated with radiological features indicative of a chondrosarcoma should raise the suspicion for dedifferentiation [14], as in our case.

Myxoid chondrosarcoma of bone is a rare neoplasm with a distinct morphology. Morphologically, the tumors are nodular with welldefined lobules. Tumor cells vary in size and shape (usually round to spindle) and are separated by myxoid stroma. Nuclei are hyperchromatic with inconspicuous nucleoli, surrounded by clear, eosinophilic cytoplasm. Neoplastic cells are arranged in chords, strands and pseudopapillary structures embedded in an abundant mucinous matrix. Cystic degeneration and hemorrhage without welldeveloped hyaline cartilage or with less than 5% differentiated cartilage cells are seen [8]. Similar, histopathological picture was seen in our patient.

Treatment of myxoid chondrosarcoma depends on the histpathological grading and clinical aggressiveness of the tumour. In low grade (Grade I) and less aggressive lesions with less chance of metastasis, wide resection of the tumour will conserve the bone adjacent to the tumour [15]. In high grade (Grade II and III) and aggressive lesions with high possibility of distant metastasis, proximal amputation is the better choice [16]. After wide resection of calcaneum for limb salvage, osteomyocutaneous flaps from the fibula can be used for better functional recovery [17]. In this patient, as the lesion was Grade II myxoid chondrosarcoma, amputation was done to prevent recurrence of the tumour. Currently, patient has been trained for using PTB prosthesis and is having good functional recovery.