Copyright: © 2011 Han SH, et al. This is an open-access article distributed under the terms of the Creative Commons Attribution License, which permits unrestricted use, distribution, and reproduction in any medium, provided the original author and source are credited.

Examination of hand strength is of great importance for identifying impairments, establishing goals, and determining the effectiveness of interventions for patients with hand or upper extremity injuries or disabilities. It is also important for any sport in which the hands are used for catching, throwing or lifting. Hand strength depends on a patient’s age, sex, and hand dominance.

As hand strength varies depending on the measuring method and a patient’s position, reliable and valid evaluation of hand strength is necessary. It appears to be that grip and pinch strength measurements provide an objective index of the function of the hand. Jamar dynamometer and pinch gauge have been found to give the most accurate and acceptable measures of grip and pinch strength respectively. This measuring tools should be performed by having the patient’s in seated position with the shoulder adducted, not rotated to either side, and the elbow flexed to 90 degrees with the forearm and wrist in neutral position, as recommended by the American Society of Hand Therapist.

This study was approved by the Institutional Review Board at our institution. The study included 515 volunteers older than 10 years, 235 male (45.6%) and 280 female (54.4%). Participants were normal individuals without any diseases or fractures. And we had provided informed consent. Anyone who had restriction of movement in the upper limbs, a history of inflammatory joint disease, for example osteoarthritis or rheumatoid arthritis on any joint of the wrist and hand, or any neurological disorder or injury involving upper extremities by self report were excluded.

Before measuring grip and pinch strength, all 515 individuals were asked to complete a standardized questionnaire regarding demographic information, occupation, current medical status, histories of disease or fracture that were related to hand or upper extremities. A physical examination was performed to see if there were any hand deformities or limitation of finger range of motion. And the findings were recorded on a data-collection sheet by orthopedic surgeons at our institution. Clinical information, grip and pinch strength data were collected and then analyzed retrospectively. This study was approved by the Institutional Review Board at our institution.

Grip strength was measured using the Jamar hand dynamometer (Hydraulic Hand Dynamometer, 5030J1, Sammons Preston, Bolingbrook, IL, USA). For all subjects, Jamar dynamometer is set at the level II. Three pinch strengths were measured using the Jamar pinch gauge (Pinch Gauge, PG 60, B&L Engineering, Tustin, CA, USA). First, the grip strength of the right and the left hand were measured, subsequently the tip pinch of the right and the left hand were measured. Then key pinch and tripod pinch were measured by the similar methods. We had 1 minute of break between each measure. After 5 minutes of break, grip strength and three types of pinch strength were measured again with the same manner, and the average strengths were obtained respectively. The tip pinch is thumb to index finger, the key pinch is thumb pad to lateral aspect of middle phalanx of index finger, and the tripod pinch is thumb pad to pads of index and middle fingers. The subject is in a seated position with the shoulder adducted, not rotated to either side, and the elbow flexed to 90 degrees with the forearm and wrist in neutral position (Figure 1 & Figure 2). The unit of whole values was kilogram (Kg). 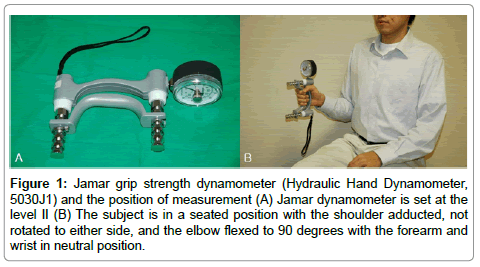 Figure 1: Jamar grip strength dynamometer (Hydraulic Hand Dynamometer, 5030J1) and the position of measurement (A) Jamar dynamometer is set at the level II (B) The subject is in a seated position with the shoulder adducted, not rotated to either side, and the elbow flexed to 90 degrees with the forearm and wrist in neutral position. R program, statistical software (Version 2.12.0, the comprehensive R archive network) was used to image two-dimensional plots, distribution graphs, and to analyze the difference between right hand and left hand strength via paired t-test. Pearson correlation analysis is used to find the most correlated pinch strength with the grip strength. P-values equal to or less than 0.05 were accepted as significant.

Both right and left grip strengths increased with aging and peaked in thirties. Then they declined gradually throughout life for both men and women. It was statistically significant that men’s grip strengths were stronger than women’s (mean 41.77kg in men and 25.20kg in women, p < .05) (Figure 3) Also there was strong positive linear correlation between the right grip strength and the left grip strength in both sexes. (r = .84) (Figure 4) 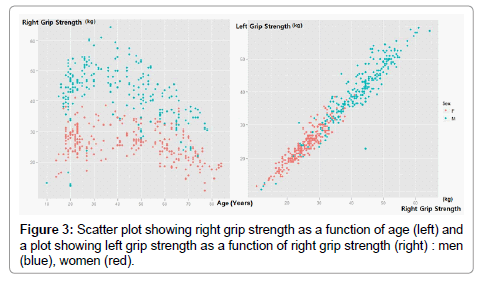 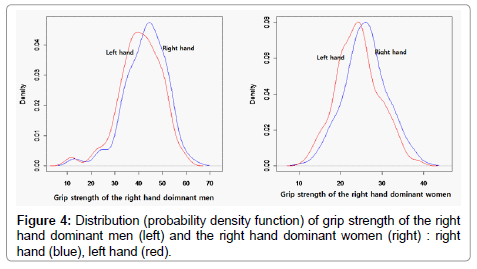 For three types of pinch strengths, key pinch was the strongest, followed by tripod pinch and tip pinch.

Key pinch: Data for both sexes demonstrate that key pinch increased with aging and peaked in thirties (mean 10.90kg in men and 7.25kg in women). Men’s key pinch declined gradually thereafter. However women’s key pinch stayed in a plateau of 6.89kg in forties and fifties, and then declined thereafter.

Tripod pinch: Tripod pinch increased with aging and peaked in thirties (mean 9.77kg in men and 6.68kg in women). Then they declined gradually thereafter.

Comparison between the right hand and the left hand 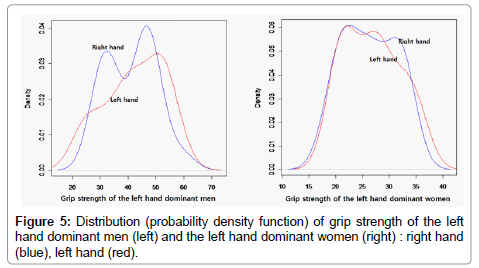 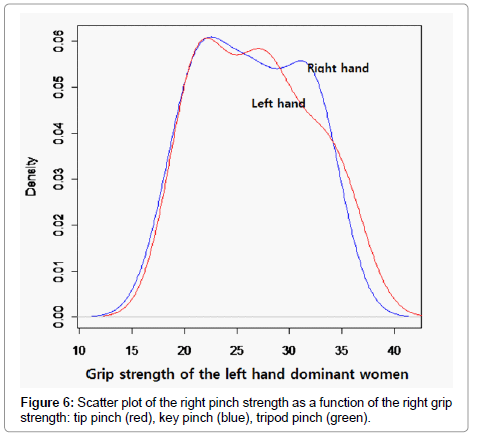 Grip and pinch strengths are important parameters when evaluating the power of the hand [7-9]. Normative data on grip and pinch strengths are valuable in determining the degree of hand or upper extremity injuries or disabilities either from musculoskeletal or the neurological system of the hand. They can be used in setting surgical or rehabilitation goals or comparing different treatment methods. It is also important for any sport in which the hands are used for catching, throwing or lifting.

There have been various methods for the evaluation of grip and pinch strengths. Jamar hand dynamometer and pinch gauge which were used in this study have been found to be the most widely used equipment. According to Bechtol et al. [1], Carla et al. [4], and Fess [5], grip strength depends on the set level of the handle. Pryce et al. [15] said that it also depends on the examinee’s posture. We set the dynamometer at level II which showing the highest scores in most of the examinees and chose the posture which was recommended by Fess [5]. Nordgren et al. [10] reported that repeated measuring of hand strength more than 2 times can cause fatigue and was not beneficial than a single measurement. Young et al. reported that there was a 12-23% of individual variation in measuring hand strength. So, we measured grip and pinch strengths twice with one minute of break between each measure and the average scores were used in this study.

Two individuals were reluctant to reveal that they were left handed. Fourteen subjects, although left hand dominant, said that they were taught and forced to use the right hand, and thus could not say which one was dominant. We think the old Korean culture correlating the right side with goodness and the left side with evil can influence some of the left hand dominant individuals having them use non-dominant hands in younger age.

The limitation of this study is that we tried to describe grip and pinch strengths with examinee’s age, sex, hand dominance. However they can be influenced by many factors such as hand size, the forearm circumference, height, weight, occupation, level of physical activities. Multivariate analysis for the explanation of grip and pinch strengths with these factors will be challenging.

The hand strength of normal Koreans have increased compared with the data from some reports in 10 years ago, and they are close to the average strengths of Caucasians. The hand strength of normal Koreans had a characteristic distribution depending on the hand dominance and sex with age. Knowledge of the normative data on hand grip strength will be very helpful for the evaluation and treatment of hand or upper extremities injuries.