Solar influence on electric equipment has been studied for a long time. The scientific evidence has been verified successfully in the Northern India Power Grid failure after an abrupt rise in Proton flux (P-flux) in the Sun Earth Environment. Induced geomagnetic current was instrumental in accelerating the rise in electric supply in the Northern Indian Power Grid leading to Grid failure and temporary blackout in the area.

On 30th July 2012 at 2:35 AM the northern Power Grid of India failed to supply electricity to the whole National Capital Region including Delhi, Capital of India. It has been recorded that there were sudden change in the frequency of electric supply from 48.5 hertz to 50.46 hertz at 2:35 AM. Sudden rise in the electric supply may have triggered by the geomagnetically induced current due to changes in proton flux and fluctuation in geomagnetic field.

Extraterrestrial influences on the planetary environment are being studied to infer the sudden changes on different planets including the Earth. Correlation of Coronal Mass Ejection from the Sun with the power grid failure was observed for a long time; however the scientific mechanism is being explained first time in Indian context.

Failure of Northern Grid of India has developed unprecedented blackout in eight states of north India. It affected 370 million people of India and huge economic setback. Political explanation is like the power grid collapsed because some states apparently drew more power than they were authorized to do to meet the rising demand during the summer [1]. Similar phenomena occurred in other parts of the world including grid failure in Quebec region of Canada on 13th March 1989, North eastern America on 14th August 2003, South Brazil on 11th March 1999, Whole Italy on 28th September 2003 and London 28th August 2003. The common factor of most of the regional grid failure is due to changes in the Sun-Earth weather. Solar storms can influence ionosphere which perturbs the magnetic field of the earth [2].

The mechanism can be explained as the magnetic fields movement about in the vicinity of grid a rise in current can be possible due to geomagnetically induced current in a large scale during geomagnetic storm [3-6]. Solar protons has shown rise before the grid failure in northern India (Figure 1). Protons are charged particles and therefore influenced by magnetic fields. Energetic protons can disrupt electrical grids. This was happened on 23rd July 2012 at 09:00 AM when the proton flux from the Sun started rising. It was rising continuously till 26th July 11.00 AM. The slow rise and slow depletion in proton flux impact took more than 3 day to influence the ionosphere which perturbed the magnetic field temporarily (Figure 2). As the charged protons arrive at the earth they cause sudden fluctuation in the magnetic field of the earth. Geomagnetically induced current was generated which was the main cause of the pseudo rise in the electric supply from 48.5 hertz to 50.46 hertz on 30th July 2012 in the northern India power grid. 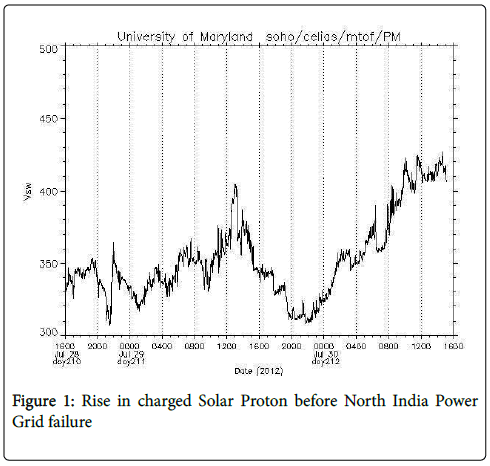 It is essential to monitor the Sun-Earth environment and its influence on the changes of different electrical gadgets needed to be monitored across the world.