Copyright: © 2014 Beyene H, et al. This is an open-access article distributed under the terms of the Creative Commons Attribution License, which permits unrestricted use, distribution, and reproduction in any medium, provided the original author and source are credited.

Background: Accidental occupational injuries to health care workers continue to have a significant problem in healthcare systems owing to the associated risk of acquiring infections such as hepatitis B, hepatitis C and human immunodeficiency viruses. Objective: The study examined the prevalence and health risk factors associated with needle stick injury in Hawassa City, Southern Ethiopia. Method: A cross-sectional survey was conducted in Hawassa City from October to January 2010. Result: Exposure to unsafe body fluids was common among healthcare workers in Hawassa City. The needle stick injury rate in the study area was 35.8%. Number of clinical procedures performed per day (p value=0.04) and the type of heath institution (p value=0.011) were significantly associated with the daily body fluids exposure. Lack of adequate personal protective equipment and negligence in personal safety were common among study participants. Conclusion: High prevalence of infections among patients in hospitals associated with high rates of occupational exposure to blood may markedly put healthcare workers at risk of infections. Therefore, infection control programs through adherence to standard precautions are critically required.

Accidental occupational injuries to health care workers (HCWs) continue to have a significant problem in healthcare system owing to the associated health risk of acquiring infections such as hepatitis B (HBV), hepatitis C (HCV) and human immunodeficiency (HIV) viruses [1-4]. The worldwide incidence of percutaneous injury with a sharp object among the HCWs is estimated to be 3 million every year where a chance of four injuries per healthcare worker could occur annually [5,6]. Exposure to unsafe blood as a consequence of the injury may have a risk of infections to human immunodeficiency virus (HIV), hepatitis B (HBV), hepatitis C (HCV) [7-10]. An exposure to such unsafe blood contacts in work places can add up to a considerable percent of infections occurring among HCWs. For example, according to the World Health Organization estimation, the global burden of disease from occupational exposure accounted 40% and 2.5% for hepatitis and HIV infections, respectively [11]. Whereas the prevalence of some infections in HCWs depends on the disease prevalence in the general population, few reports showed a relatively higher sero-positivity for HBV among the healthcare workers in the health facilities [12].

Studies reported the high prevalence of needle stick injury among health professionals in Ethiopia [13,14]. Such occupational injury leading to workers dissatisfaction and psychological trauma may reduce workers motivation and in turn may affect the quality of health care [13,15]. In our previous work we demonstrated the chance of occupational risk of contracting HIV from patient to healthcare workers in Hawassa City [16]. Owing to the considerable number of injuries in the study area [14] and the chance of cultural and ethnic influences; identification of health risk factors related to occupation is important for designing and employing effective risk preventive programs. In this study, we examined the prevalence and health risk factors associated with needle stick injury in Hawassa City.

We conducted a cross-sectional study involving healthcare workers in one referral hospital and three health centers located in Hawassa town.

The study referred the healthcare workers in Hawassa. According to Hawassa City Administration Health Department report (2008), the city contained 52 healthcare institutions; five hospitals, two health centers, three higher clinics, 23 intermediate and small clinics, five eye and dental clinics and 14 diagnostic medical laboratories. In this study, only public owned Health Institutions, Hawassa University Referral Hospital and three Health Centers which are found in Hawassa City were considered. These heath institutions were purposefully selected to avoid bias reports from Private Health Institutions. Since the Survey assess the safety conditions health institutions, participants from private health institutions will deliberately tell false responses fearing the following measures to come from concerning government controlling agencies. The source population of the study was all health care workers in public healthcare institutions and who were involved in patient diagnosis, treatment and care. Study subjects were health care workers such as nurses, physicians, laboratory technicians and others working in Hawassa referral hospitals and the selected three health centers. Selection of the health institutions were purposive considering the high number of workers. The survey was carried out from October 2009 to January, 2010. Structured questionnaire aimed at assessing the factors associated with occurrence of different contacts and injuries for various kinds of exposures, potential safety and health hazards associated with the clinical/medical procedures and the workers’ perception of risk were prepared. To evaluate its understandability and applicability the questionnaire was pretested in two private Hospitals (Kibru and Asher Hospitals). The total number of HCWs (Health Care Workers) in the study Health Institutions were 221 and all HCWs were considered for the survey. However, 162 were volunter to respond to the self-administered questionnaire. An important limitation of this study was the small number of volunteers participated in the study.

Data analysis and cleaning was performed using Statistical Package for Social Sciences (SPSS). Chi-square statistics was use to examine the presence of association between the factors and occurrence of blood, fluid contacts and injuries. Odds ratio with 95% confidence interval was used as indicators of the strength of associations.

A total of 162 HCWs were participated in the study. Among the total participants, 61.1% of them were females and the remaining 39.9% were males. Age of the respondents was ranged from 20-50. Out of the total respondents, 58% of them were nurses and the remaining were physicians (22.1%), laboratory technicians (7.4%), clinical health officers (5.6%), midwives (3.7%), and others HCWs (3.1%). The high number of nurses in this study represents the professional distribution in the healthcare system due to increasing number of these professionals in Ethiopia [17]. Moreover, in most healthcare practice, nurses are groups with high-risk of needle stick injury, regardless of the variations between practice areas.

The average service year of the participants was 6.54 ± 6.83. Sixty three healthcare workers (38.9%) responded that they were working in various clinical departments during their service time, and the remaining were working in obstetrics/gynecology (29.6%), surgery (9.9%), internal medicine (9.3%), pediatrics (8.0%) and laboratory technicians (4.3%).

The total median service year was 4 with minimum and maximum values of 0.8 and 36 years respectively. The average number of clinical procedures that HCWs performed per day was 19.84 (±2.5). Tremendously high (84.6%) level of life time exposure to unsafe body fluids was reported by the healthcare workers in the study region compared to reports in Eastern Ethiopia (28.8%) [6].

Although comparison of this figure should be with caution due to the varying work experience between the groups of healthcare workers and the working condition, the possible contributions for the high level of exposure could be attributable to the short working experience of the healthcare workers in this study (6 years) combined with working loads such as handling of routine IV insertion and blood draws, lack of cooperation by patient, frequent recapping of needles. Alemayehu21 also reported that working for long hour found to be significantly associated with occurrence of NSI. Other studies in the country reported different conclusion regarding the role of experience. Short term experience had no effect on exposure status have been reported by Reda [6].

Considerable number of the health personnel (15.8%) had blood contact for more than 3 times and 21.05% had at least twice. Participants were also asked if they were aware of the HIV serostatus of patients they had the blood contact. From the total respondents, 57.9% of them had no information on the patient history.

From the interview, the mode of exposures to blood contact were needle stick injury (35.8%), contact of eyes (17%), and cuts from sharp objects (11.7%) (Figure 1). The needlestick injury rate reported in this study was comparable to reports from similar studies in North West Ethiopia [18] East Ethiopia [6] Gondar, North Ethiopia [13] and 2007 report in Awassa [14]. The prevalence of such incident was also comparable to other developing countries [19,20]. Factors such as lack of adequate PPE, negligence of using the protective equipment could contribute possibly to the unsafe medical practice. 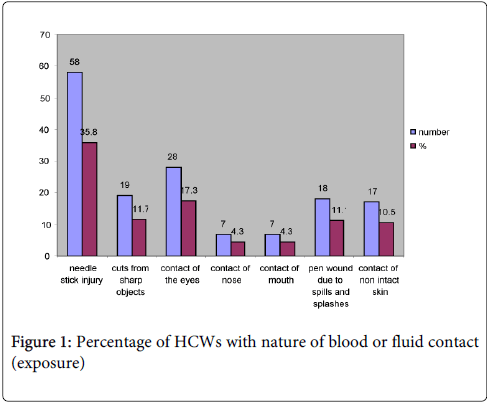 Figure 1: Percentage of HCWs with nature of blood or fluid contact (exposure)

Among the respondents who were asked to rate the safety of their working set up, 60.5% of them responded safe while 11.7% of the respondents didn’t have the awareness on the level of safety. About 13.6% reported that they didn’t use protective device during the blood contact due to lack of adequate protective devises and negligence. In this study, lack of awareness, less adequate resources in every practice areas, workers negligence, and limited leadership corresponded with the prevalence of such high blood contact among healthcare workers. The remarkable psychological influence (46.3%) associated with the occupational injury could also affect the quality of healthcare.

Participants were also asked about their perception of using PPE, and 54.9% of the HCWs reported that the equipment they were using were not safe. Healthcare workers who were negligent of using PPE and unaware of the associated risk of exposure to blood contact could suggest the possible effect of lack of strict occupational training and practice. This could possibly contribute for the high level of healthcare workers exposure to unsafe body fluids, particularly, where quite high number of health personnel had conditional use of PPE during their medical practice than as necessity of safe practice.

There had been significant chi square association between exposure to body fluids and service year (P value=0.006), number of procedures performed per day (P value=0.04), type of heath institution (p value=0.011) and practice of PPE use (P value=0.006) (Table 2).

Moreover, healthcare workers in Hawassa Referral Hospital had two-folds of higher risk of unsafe body fluids exposure than in health centers. The workers with less than 5 years’ work experience had three-folds of risk compared to those with more experience (Table 3). The high risk to hospital healthcare workers could also be due to the frequency of extensive procedures for high-risk service where workers could be unfamiliar to workloads due to short experience.

High level of exposure to unsafe body fluids was reported by the healthcare workers whereas the needlestick injury rate was comparable to reports from similar studies. The rate of injury and associated health risk to healthcare workers could be higher in hospitals. High prevalence of infections among patients in hospitals associated with high rates of occupational exposure to blood may markedly put healthcare workers at risk of infections. Training on prevention of occupational blood exposure to HCWs need to be in place by the Regional Health Bureau and zonal heath departments with subsequent implementation of Universal Precautions measures and infection prevention guidelines to safeguard the health of their employees. Post Exposure Prophylaxis and regular reporting of unsafe exposures should be made available to the HCWs.