Optimization of EMS Mutagenesis on Petunia for TILLING

The development of a chemically-mutagenized population of Petunia hybrida could enable the identification of novel alleles for crop improvement. Conditions were determined for mutagenizing petunia with ethyl methanesulfonate (EMS), while minimizing deleterious effects on viability and fertility. A mutagenized population of the doubled haploid P. hybrida line ‘Mitchell Diploid’ was developed as a resource for TILLING. Three mutagenesis parameters were investigated in this study: the imbibition of seeds prior to EMS treatment, the EMS concentration, and EMS exposure time. Based on these results, the mutagenesis of 2000 petunia seeds for TILLING was conducted with a 12 hour imbibition followed by exposure to 0.1% EMS for 12 hours.

Mutagenesis has been used to introduce genetic variation in ornamental plants for several decades [1,2]. More than 560 ornamental varieties from 41 plant species have been officially released from mutation breeding programs [3]. Generally, plants with novel traits were identified phenotypically from large, mutagenized populations. More recently, DNA screening techniques such as TILLING [4] have been developed that allow mutagenized populations to be analyzed genetically, before trait expression. The combination of mutagenesis and DNA screening has enabled the identification of novel alleles in model plants [5] and horticultural species [6].

Petunia hybrida Vilm is an interspecific hybrid that is both a topselling ornamental [7] and a genetic model [8] Mutagenesis of this herbaceous ornamental can be a useful tool for crop improvement and basic research. A potential application of mutagenesis is in the development of petunias with resistance to pathogens that can infect plants during commercial propagation, including powdery mildew [9] and potyviruses [10,11]. Resistance to powdery mildew and potyviruses can be conferred by mutations in specific genes, which have been targets for TILLING in other crop species [12,13]. The TILLING of petunia for mutant alleles in light signaling and anthocyanin metabolism genes was recently reported [14]. There are published protocols for the mutagenesis of petunia with ethyl methanesulphonate (EMS), but they vary in terms of concentration (0.1% to 0.5%), exposure time (10 to 24 hours), and seed pre-treatment [15-17]. In this paper, we describe the optimization of mutation parameters, the development of an EMSmutagenized population that could facilitate TILLING.

Mutagenesis experiments were conducted with seeds of the doubled haploid cultivar Petunia hybrida ‘Mitchell Diploid’. Three parameters were examined factorially: pre-treatment imbibition (2 treatments), EMS concentration (4 levels), and EMS exposure time (3 intervals). For each of the 24 treatments, there were 3 replicates of 24 seeds. Prior to exposure to EMS (Fluka, USA), seeds were either not treated or were imbibed in 500 μl of sterile deionized water for 12 h in the dark with mild shaking (45 rpm) at room temperature. EMS concentrations (0, 0.1, 0.2 and 0.3% v/v) were tested by adding an appropriate volume of freshly-prepared 0.5% EMS to the imbibed seeds. The seeds were then incubated in the dark at room temperature for 6 h, 12 h or 24 h with mild shaking (45 rpm). After EMS treatment, the seeds were rinsed 10 times with 1 ml of sterile deionized water and sown in 72 well trays containing soil (Fafard 3B potting mix). Individual seedling were transplanted to pots (4×4×6 inch) and maintained in 16 hour daylight greenhouse (latitude 33.95N and longitude -83.378W).

For the EMS treatments, a two-factor/one block experimental design was used with imbibition time as a block. Plants were evaluated 10 days after sowing for seed germination and 30 days after sowing for flower number. Analysis of variance (ANOVA) of the obtained data and regression analysis were conducted using Sigma Plot software.

Evaluation of the genotoxic effect

Genome damage was indirectly evaluated by the effect of the mutagen treatments on developmental and physiological parameters in time course analyses from 1 to 30 days after sowing (DAS) and at 15 and 30 DAS for the following characteristics: seed germination (%), height (mm), flower number and anther quality. Data were individually scored and statistically analyzed by ANOVA and regression analyses.

Procedures for EMS mutagenesis of P. hybrida were optimized to balance high mutation frequency with plant viability and fertility. Three mutagenesis parameters were investigated: the imbibition of seeds prior to EMS treatment, the EMS concentration, and EMS exposure time. The results of combinations of these factors on germination frequency and flower number are shown in Figures 1 and 2, respectively, with summary statistics in Tables 1 and 2. The effect of seed imbibition prior to mutagenesis was significant for both germination and flower number. EMS concentration and exposure time had significant effects on flower number, but not on germination. After a 12 h exposure to EMS, the average number of fruit per plant decreased from 2.7 capsules in controls to 0.6, 0.2, and 0 capsules in treatments with 0.1%, 0.2%, and 0.3% EMS, respectively. Based on these results, the mutagenesis of 2000 petunia seeds was conducted with a 12 hour imbibition followed by exposure to 0.1% EMS for 12 hours. After flowering, the M1 plants were self-fertilized manually to produce the M2 generation. More than 1000 M2 plants were generated from M1 seeds. 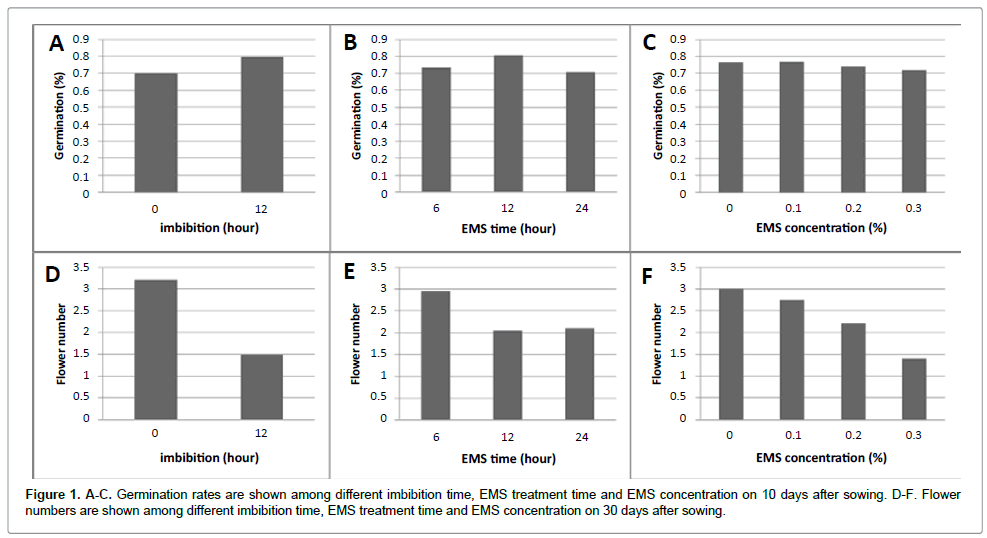 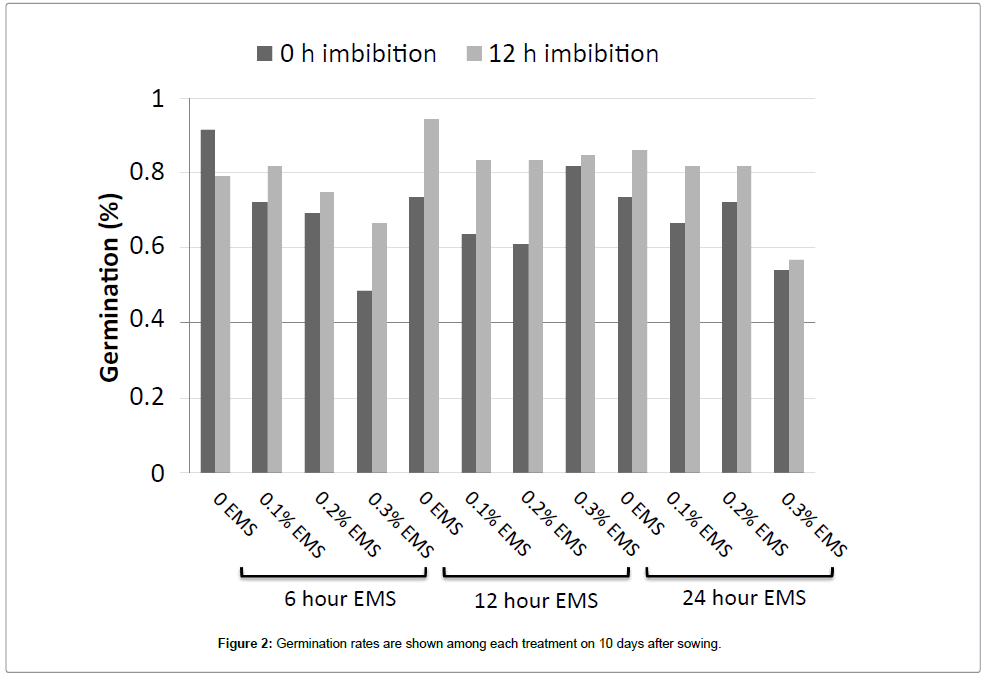 Figure 2: Germination rates are shown among each treatment on 10 days after sowing.

The petunia seed germination and flower number were significantly affected by the mutagen dosage, treatment time and imbibition time of EMS. Fifteen days after germination, plant height was investigated. The plant heights are negatively affected by increased mutagen dosage of EMS (Figure 3). The plant height of 12 hour EMS treatment among different dosages presented linear correlation coefficients, 99.8% for 12 hour EMS treatment at 99% of probability. Thirty days after germination, anther qualities on each plant were investigated. The anther quality has been classified as four ranks. The quality decrease when the mutagen dosage increase and the longer exposure time (Figure 4). 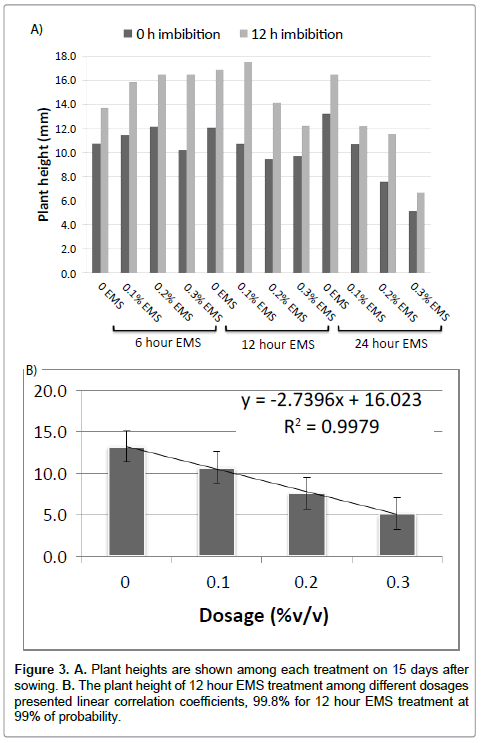 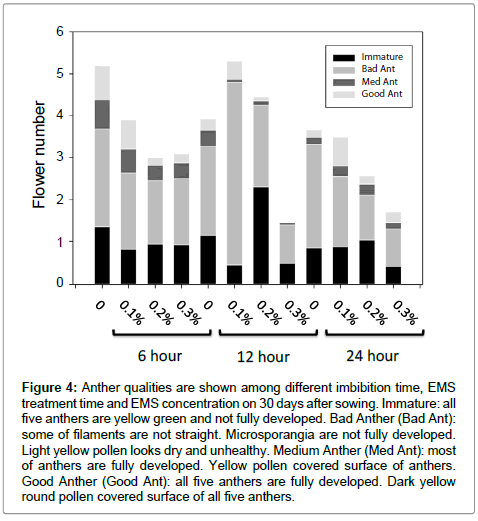 The conditions for EMS mutagenesis of Petunia hybrida ‘Mitchell Diploid’ were optimized in preparation for the development of a mutagenized population. Protocols for petunia mutagenesis have been published previously [15-17], but there is little consensus in procedures. This may be related to differences in genotypes. The optimized parameters described in the present work most closely resemble those of Berenschot et al. [15], who used a 14-hour seed imbibition followed by 24 hours of exposure to 0.1% EMS. In their study, EMS concentration had only minor effects on viability after 15 days, but seed capsule production was reduced by 25% with 0.25% EMS [15]. In our hands, treatment of seeds with 0.2% EMS reduced the number of capsules by 79.8%. The application of our EMS mutagenesis protocol to 2000 petunia seeds and manual fertilization of the resulting plants produced an M2 population suitable for TILLING [18].

In order to increase the likelihood of inducing distinct types of genetic variation in P. hybrida, a protocol was developed for mutating petunia with EMS while minimizing deleterious effects on viability and fertility. A mutagenized population was produced that is suitable for screening by genetic techniques such as TILLING [19-21].

We would like to thank Dr. David Clark (University of Florida) for providing Petunia hybrida ‘Mitchell Diploid’ seeds used in this research.

Copyright: © 2014 Jiang P, et al. This is an open-access article distributed under the terms of the Creative Commons Attribution License, which permits unrestricted use, distribution, and reproduction in any medium, provided the original author and source are credited.