Osteoid Osteoma of the Talus: Rare entity, Rare Presentation and a Novel Method of Management: A Case Report

Copyright: © 2016 Srampickal GM, et al. This is an open-access article distributed under the terms of the Creative Commons Attribution License, which permits unrestricted use, distribution, and reproduction in any medium, provided the original author and source are credited.

Osteoid osteoma is a rare entity in the tarsal bones especially in children. High degree of suspicion is needed for early diagnosis and delay in diagnosis can cause significant disability. Radiofrequency ablation (RFA) is safe, minimally invasive method especially to treat juxta-articular and inaccessible lesions. Atypical Osteoid osteoma can present with clinical features similar to that monoarticular juvenile idiopathic arthritis. This case highlights the unique features of a rare entity and a successful method of treating Osteoid Osteoma of the Talus with radiofrequency ablation after procuring tissue for biopsy by a novel method.

Osteoid osteoma is a relatively common benign bone tumour and accounts for about 11% of benign bone tumor. 70% of the affected individuals are below the age of 20 and is rare under the age of 5 and above 40 years [1]. Compared to upper extremity incidence of osteoid osteoma is more in lower extremity. Diaphysis of femur and tibia accounts for around 50% of osteoid osteoma. There incidence in cancellous bone and intraarticular location are rare. Talus is the common site for osteoid osteoma of foot [2]. Patients usually present with dull aching pain more in night and got relieved dramatically on taking non-steroidal anti-inflammatory agents, which may be due to high level of prostaglandin in the nidus [3,4]. Juxta-articular osteoid osteomas can present with features similar to that of inflammatory synovitis, and in such cases radiological features can be atypical. Due to atypical presentation, diagnosis is often delayed and a high degree of suspicion is needed for early diagnosis [5]. Plain radiographs, CT, MRI and bone scan are the investigations of choice and CT is the gold standard investigation for diagnosing this lesion [6]. Surgical excision of the tumour is the treatment of choice, particularly when there is a doubt in the histology of the lesion. Radio frequency ablation is a novel minimally invasive procedure with promising results [7-9].

A 12 year-old Indian girl who is an amateur basketball player presented with pain over her right ankle for 18 months with associated swelling. Pain was of insidious onset and dull aching type and continuous. Pain got temporarily relieved with NSAID. She was initially evaluated in another hospital were initial radiological evaluation was inconclusive and she was started on DMARDS as the clinical presentation mimicked that monoarticular juvenile idiopathic arthritis. Since the pain was persistent she underwent arthroscopic synovial biopsy of the right ankle at the same centre which was inconclusive and had intra articular steroid injection. When she presented to us she had diffuse swelling over the ankle with sharp tenderness on the dorsolateral aspect of foot over the talus. Her active ankle range of movements was from 10° dorsiflexion to 20° plantar flexion which was pain full terminally. No positive signs of ankle instability. She was not playing basketball for the past one year due to pain. Initial blood investigations revealed an Hb of 11.8 g/dl, a total WBC count of 6200/cu mm, a CRP of <3.28 and an ESR of 13 mm/h. The rheumatoid factor and anti-nuclear antibody were negative. Plain radiographs of the ankle and foot were normal. Magnetic resonance images revealed the nidus and associated sclerosis adjacent bone marrow (Figure 1). Pain at rest and during activities was scored from 0 (no pain) to 10 (maximal pain) using visual analogue scale (VAS). Her pre operative pain score at rest was 4 and at activity was 6. An informed consent was obtained from patient and her father to perform a radiofrequency ablation. Procedure was done under general anaesthesia. With 3 mm CT sections the nidus was localized and osseous access was established with a 6 mm cannulated drill. After localization, core biopsy was taken from the cannulated drill bit. Radio frequency ablation probe (Starburst SDE, RITA Medical Solutions, Mountain View, CA, USA) was advanced through the drilled channel and tip of the probe was placed in the nidus. Monopolar Radio frequency ablation was performed for a period of 5 minutes at 90°C and at 60 W (Figure 2). 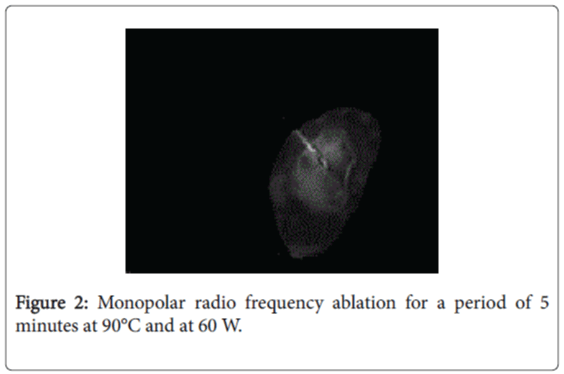 Figure 2: Monopolar radio frequency ablation for a period of 5 minutes at 90°C and at 60 W.

Histopathological examination showed abundant osteoid in a fibrovascular stroma. The trabeculae were reamed by prominent osteoblasts with no mitotic activity. The diagnosis of osteoid osteoma was confirmed. Preoperative visual analogue score (VAS) for pain was 4 at rest and 6 on activity. At first post operative day VAS at rest improved to 0 and VAS at activity improved to 2. At 6 months post operative follow up she continued to have no pain at rest and VAS on activity improved from 2 at 1st post operative day to 0 on six month follow up. At the one-year follow-up, the patient was asymptomatic and had no recurrence.

Talus is a rare location for osteoid osteoma and a high degree of suspicion is needed for diagnosis. A diagnosis of osteoid osteoma should be considered in case of chronic ankle pain that got subsided on taking NSAIDS and when the imaging is not specific. Snow et al. in there series of 5 patients with osteoid osteoma took an average of 2.5 years for diagnosis [10]. The lesions may eventually become asymptomatic after a mean of 3 years of non-operative treatment [11]. Radiofrequency ablation under CT guidance is a novel treatment option, but the disadvantage of RFA is biopsy tissues cannot be obtained. Atypical osteoid osteomas have different clinical and radiological findings and they are rarely seen in feet. For talar osteoid osteoma the non-specific features includes synovitis and stiffness. Diagnosing osteoid osteomas in the small bones of the hands and foot is difficult. Early diagnosis enables early treatment and avoids unnecessary suffering and late complications. RFA is an alternative to surgical excision in the periarticular region with fewer complications and less hospital stay compared with surgical exposure and use of a large cannulated drill bit can ensure the biopsy specimen.

A Disclosure / Conflict of Interest Statement

• None of the authors of this paper has a financial or personal relationship with other people or organizations that could inappropriately influence or bias the content of the paper.

• It is to specifically state that “No Competing interests are at stake and there is No Conflict of Interest” with other people or organizations that could inappropriately influence or bias the content of the paper.