Outbreak of Astrovirus in Adults with Acute Gastroenteritis in Korea

Copyright: © 2015 Hwang BM, et al. This is an open-access article distributed under the terms of the Creative Commons Attribution License, which permits unrestricted use, distribution, and reproduction in any medium, provided the original author and source are credited.

Astrovirus is generally known for inducing mild diarrhea in infants. However, an outbreak of astrovirus infection occurred in adults on February 14, 2014, in Korea. Astrovirus type 1a is the predominant strain worldwide but was not detected in this study. By contrast, type 5 was detected in all specimens, although type 5 is relatively uncommon in Korea.

Astrovirus is a small, round, non-enveloped, single-stranded (+) RNA virus with a diameter of 27-32 nm, and its genome consists of approximately 6,800 nucleotides and contains three overlapping open reading frames (ORFs) [1]. Astrovirus genotypes are classified into eight distinct groups based on the capsid protein precursor, and genotype 1 has been reported to be the predominant type worldwide [1]. Astrovirus induces a mild watery diarrhea that lasts for 2–3 days and may be associated with vomiting, fever, anorexia and abdominal pain in young children in developing countries [2]. Most astrovirus infections have been detected in conditions of low temperature and high humidity, similar to rotavirus infections [2].

Norovirus and group A rotavirus are known as the main causative agents of gastroenteritis and are responsible for a large proportion of the morbidity and mortality associated with diarrheal illnesses [3]. For this reason, diagnostic tests have been primarily focused on norovirus and group A rotavirus when outbreaks occur. However, co-infection cases, where both group A rotavirus and astrovirus are present, were reported in newborn infants with diarrhea in 2002 [4]. Additionally, astroviruses have been identified as one of the most frequent causes of infantile gastroenteritis, second in incidence only to rotavirus [3].

Astrovirus shows a low incidence (below 1%), according to EnterNet-Korea, which is a Korean acute diarrheal surveillance laboratory. Several outbreaks associated with astrovirus infection have been reported in military recruits in France, primary and junior high school teachers in Japan, and in South African and Australian elderly [5-8].

In this study, we report that astrovirus can be a causative agent of gastroenteritis outbreaks in adults and characterize molecular epidemics of astrovirus associated with this outbreak.

This outbreak occurred in riot police camp in Chungcheongbuk-do, with symptoms of diarrhea (100%), abdominal pain (100%), headache (80%), nausea (70%), and fever (30%) (Table 1). The disease onset in the first patients was on February 14; the number of cases peaked on February 15 and began to decrease on February 16 (Figure 1). Clinical symptoms occurred in 10% (10/98). An epidemiological investigation was performed with a case-control study design. Cases were defined as 10 patients who showed at least two symptoms (diarrhea, fever, vomiting, or abdominal pain) within 24 hours beginning on February 14. The controls were 17 team members who shared food and space but did not exhibit clinical symptoms. Upon confirmation, the epidemiologic survey team visited two locations to conduct the investigation. The first location was a riot police camp, which was in a shared community space. The second location was outdoor restaurant, which was messed with several foods on February 13 before disease onset. Specimens were collected from two locations, such as stool samples from the cases, controls and asymptomatic food handlers at the outdoor restaurant; ingested food; and water from several ground water sites at a riot police camp. 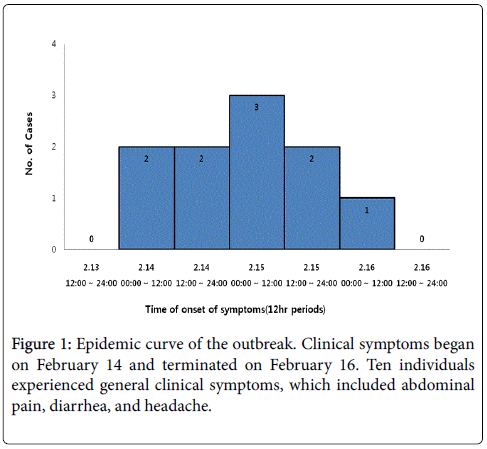 Figure 2: Phylogenetic analysis of astrovirus detected in the outbreak, based on 449bp of the capsid region (ORF2) sequences. The phylogenetic tree was generated using the neighbor-joining method with distance calculation by Kimura-2-parameter correction implemented in the MEGA6 software. The numbers in the branches indicate the bootstrap of 1000 replicated values. HAstV: Human astrovirus. Reference strains of HAstV were registered in GenBank under the accession number indicated in the text. Outbreak samples are marked with a triangle.

This outbreak occurred among the riot police, which consisted of healthy young individuals. Consequently, this case is important epidemic consideration. In the current study, we sought to address why an outbreak occurred in this adult group.

The first reason an outbreak occurred is that several infection routes existed. Enteric virus is readily transmitted via the fecal-oral route, although outbreaks have often been prolonged due to the ability of viruses to survive on environmental surfaces, on foods, and in water. This outbreak indicated that co-infection occurred via several routes, such as contaminated water in the riot police camp and foods and cookware from an infected asymptomatic food handler at the outdoor restaurant. However, contaminated water was suspected as the main cause of the outbreak. Riot police were dispatched to and returned from other regions before the week of the outbreak. They did not use the drinking and cooking water provided from the water storage tank during this period; thus, the astrovirus might have become concentrated and infected the riot police. Indeed, astrovirus was detected in the water purifier and water supply system until the second samples collected after the outbreak but not from the third water samples (data not shown).

The second reason is likely due to the astrovirus genotype. Astrovirus type 1a is the predominant strain worldwide but was not detected in the case and control groups in this study. By contrast, type 5 was detected in all specimens, although type 5 is relatively uncommon in Korea [11] and was reported only one outbreak case in the world [12].

Acquired immunity is influenced by infection. The highly prevalent genotype 1a may have already immunized many people and therefore is not critically infectious [11]. However, astrovirus type 5 is a rare strain in Korea, and few individuals possess total immunity [11]. In addition, physical fatigue in riot police that have been dispatched and returned may decrease the tolerance against astrovirus infection and lead to the onset of symptoms. Similar case had reported as a outbreak in students at military school (18-20 years old) with serotype 3 astrovirus [5].

The third reason is the applied detection method. Duplex conventional RT-PCR is used as a standard method for laboratory surveillance of diarrhea and detecting viruses causing outbreaks in Korea. This is highly effective at detecting astrovirus and sapovirus simultaneously but shows limited sensitivity and specificity. Therefore, monoplex conventional RT-PCR was applied in this study to detect and amplify target genes for sequencing.

Monoplex conventional RT-PCR followed the detection rate of realtime PCR, although being more laborious than duplex conventional RT-PCR. Causative pathogens were not revealed in 40% of the outbreaks. Norovirus and the group A rotavirus, but not other viruses, were focused on as candidate pathogens when the outbreak occurred. If the efficiency of the detection methods is improved by using alternative techniques such as real-time PCR, the prevalence of astrovirus may be increased.

Astrovirus generally induces mild diarrhea in infants [13] but, in this case, induced gastroenteritis in adults. The described results suggest that there are several infection routes for the astrovirus infection. In particular, contaminated drinking water may be an important infection route; however, an asymptomatic food handler is also considered a potent transmission source. Different genotypes are also known to affect the infection route and this may be able to provide new chance of infection. Therefore, the periodic surveillance of genotypes and immunity studies may be necessary to further investigate the astrovirus infection.

This study was supported by national laboratory surveillance system (4851-304-210), from Ministry of Health and Welfare, Korea National Institute of Health.