Copyright: © 2013 Watson GC, et al. This is an open-access article distributed under the terms of the Creative Commons Attribution License, which permits unrestricted use, distribution, and reproduction in any medium, provided the original author and source are credited.

Objective: Potential moderating effects between parental control and close friend support on youth conduct problems have not been investigated. Goals of this study were to investigate for a possible curvilinear relationship between parental behavioral control and child conduct issues, as well as the potential that parental control will moderate the relationship between friend support and those behaviors.

Results: Through hierarchical regression, the current study shows a curvilinear main effect for parent control on conduct problems. Additionally, close friend support is a protective agent only for those youth in families with high and medium levels of parental control, and a risk factor for children from families with low parental control.

people under the age of 18 commit 16.2% of reported violent crime and 26.1% of reported property crime (United States Department of Justice) [1]. Hence, there is a need to understand precursors to delinquency to inform early intervention/prevention. Delinquency can be conceptualized as engaging in conduct problems, consistent with the diagnostic criteria of conduct disorder (CD), according to the International Classification of Diseases (ICD-10; Word Health Organization) [2]. The current study investigates the interactive effect of two previously studied protective factors against conduct problems: parental control and close friend support. Specifically, this study elaborates upon previous research by testing the existence of an optimal amount of parental control, defined as parental rule-setting [3,4], and its potential moderating influence on the protective benefits, commonly attributed to close friend support.

The diagnostic criteria for all three subtypes of CD (Confined to the Family Context, Unsocialized, and Socialized) outlined in the ICD-10 [2], call for marked antisocial behavior such as: cruelty to others or animals, destruction of property, fire setting, stealing, repeated lying, running away from home and severe disobedience. The three subtypes are differentiated by the relationships in a child’s life. CD Confined to the Family Context is characterized by conduct problems and disturbed relations at home only. Unsocialized CD is characterized by solitary conduct problems that occur in any environment other than solely at home, and are paired with poor quality friendships. Conversely, Socialized CD is characterized by conduct problems in the presence of meaningful friendships, often with peers who also engage in delinquent acts. Hence, CD exists in a variety of family and peer contexts that may influence the development of conduct problems. This differentiation among types of CD provides interesting clues into factors that may be associated with conduct problems.

Monitoring is any effort made by parents to track their child’s behavior. Hoeve et al. [3] meta-analysis found monitoring to have the most significant protective effect against conduct problems of any form of behavioral control. However, as suggested by Rollins and Thomas [5], high levels of monitoring can also increase the risk that youth have drug-using friends [8]. In this case, the authors hypothesize the girls’ antisocial associations to be a rebellion against what they may have perceived as “overly restrictive” parenting [8]. Next, discipline consists of the consequences that parents impose for problem behavior. While Hoeve et al. [3] found discipline to be a significant protective factor against conduct problems in general, it is also the most likely to lead to conduct problems when at high levels [9]. Additionally, Aunola and Nurmi [6] found the effects of discipline to be moderated by psychological control, with excessive discipline being a significant risk factor only in families with high reports of psychological control [6]. Finally, research conceptualizing behavioral control as rule-setting has also found a significant protective effect, overall [3]. However, similar to the other forms of behavioral control, it has also been shown to be a risk factor when at high levels [10]. The present study uses this form of behavioral control to assess outcomes at different levels of parental control to test the possibility of an optimum level, as theorized by Rollins and Thomas [5]. Furthermore, this study also assesses how this form of parental control affects the relationship between close friend support and conduct problems.

Flyers were sent home with students in public schools in a small Midwestern metropolitan area. Those interested returned the flyers with their contact information, and appointments were set up at the child’s school or a local university. One parent for each child completed questionnaires about demographics, family environment and child’s behavioral and emotional functioning. Children completed questionnaires about perceived social support. After parents gave informed consent, children went to another room. A research assistant read all items to children younger than 12. If children 12 or older were able to read the assent form aloud with little trouble, they answered questionnaires independently. parents were given five dollars compensation.

parental control was measured with the Family Environment Scale (FES; Moos and Moos, [4]), a scale including ten, 9-item subscales, one measuring parental control. The control subscale has adequate internal consistency (Cronbach’s α=.67) and good test-retest reliability at a 2-month (r=.77) and 4-month follow-up (r=.78; Moos and Moos, [4]). Furthermore, differences between parent and child reports of parental control have been found to be non-significant (parent’s M=4.97, SD=1.89; Child’s M=4.87. SD=2.10), validating the use of parental report [4].

Close friend support was measured using the Social Support Scale for Children (SSSC; Harter [20]). The SSSC has 24-items, including a 6-item close friend subscale that assesses the extent to which children believe that they have a close friend who listens, cares, and understands them. This scale has shown good to good internal consistency (Cronbach’s α=.73 (children); .80 (adolescents)).

Table 1: Descriptive statistics for and correlation among study variables. 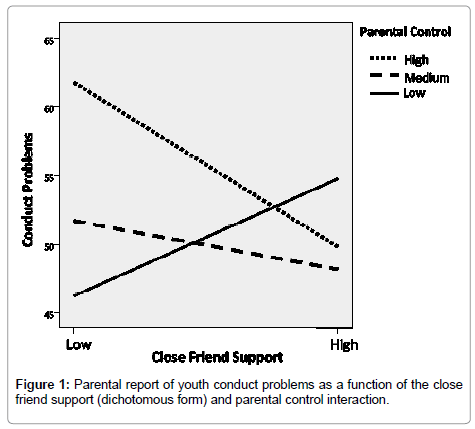 The results suggest that youth highly engaged with peers are at particular risk in low-control families, a fact that parents and professionals should be aware of. Youth who fit this profile but have not yet developed clinically significant levels of conduct disturbance, would be ideal candidates for prevention efforts. Such efforts should look to increase parental control to moderate levels, as peer support can be a positive influence when parental control is not lacking.

The current study shows that close friend support can yield detrimental effects on youth outcomes. Future studies can build upon this finding by probing further into familial contexts that breed risky friendships, as well as by identifying other moderating influences on close friend support. Additionally, future research should investigate factors influencing the curvilinear relationship between parental control and conduct problems. One possibility is to further explore the moderating influence of psychological control on behavioral control [6]. Research also can be expanded to include evaluations of intervention programs that seek to help parents engage in moderate levels of control.

Future research also should seek to address some limitations of the current study. All of the data on family environment and conduct problems was parental report and on friend support was child report, introducing the possibility of reporter bias. Future research should include multiple reporters, and/or observation for all variables. Additionally, the generalizability of the current study is limited by the population from which the sample was drawn. Future research should include multiple sites with diverse populations.

Future research should use a longitudinal design as this study is cross-sectional, so causal inferences cannot be made. That is, the directional relationship between parental control/close friend support and conduct problems cannot be inferred from this study. Theoretically, both factors have been found to cause and result from conduct problems.

Other limitations in this study include the fact that the sample represents a broad range of ages and development influences the variables under investigation. However, there were not enough participants to examine the data separately by age. Future research with larger samples would allow such analyses.