Pathological Fracture as a Complication of Cystic Degeneration of Parathyroid Adenoma

Parathyroid cystic adenomas are often misdiagnosed as thyroid cysts. We report a case of haemorrhagic cystic parathyroid adenoma, which presented a diagnostic challenge that led to life-threatening complications. A 46-yearold man who was mis-diagnosed as having a thyroid follicular cyst 4 months ago, presented with pathological fracture right neck femur. Laboratory investigations revealed increased serum calcium, parathyroid hormone, and impaired renal function. Ultrasound examination of the neck showed complex cystic lesion related to the left thyroid lobe. He had medical treatment of hypercalcaemia followed by surgical excision of a 5.5 cm cystic neck mass. He stayed in hospital for 6 months during which the calcium and parathormone returned to normal, his fracture healed, and the bone texture had improved.

Primary hyperparathyroidism (PHPT) is usually diagnosed as an incidental finding of raised serum calcium or due to symptoms secondary to hypercalcemia [1]. The occurrence of bone lesions such as pathologic fractures in PHPT is now rare since methods to measure serum calcium became available routinely [2]. Cystic degeneration of parathyroid adenoma is seen in 1-2% of patients with primary hyperparathyroidism [3,4]. The clinical manifestations of functional cystic parathyroid adenoma are usually similar to those of nondegenerated adenomas and include a biochemical profile consistent with that of primary hyperparathyroidism and a broad array of symptoms, including fatigue, depression, nephrolithiasis, osteoporosis, and abdominal pain. As have their solid counterparts, cystic adenomas have been reported to occur in hypercalcaemic crisis as the result of acute necrosis or haemorrhage of a parathyroid adenoma [5]. The clinical presentation of parathyroid cyst frequently resembles thyroid nodules leading the clinician to mistakenly believe that thyroid disease is involved [6]. Although imaging is a useful part of the preoperative assessment of such lesions, there are no specific radiological methods for differentiating parathyroid cysts from other cystic neck lesions. Ultrasonography may reveal a non-specific cystic structure. Computerised tomography (CT) and MRI may demonstrate the cystic component of these lesions and help to visualise the relationship with adjacent tissues which are particularly useful in the presence of substernal extension or compressive symptoms, they may also be employed when a diagnosis cannot be reached using ultrasound guided FNA, if malignancy is suspected, or for preoperative planning [7]. 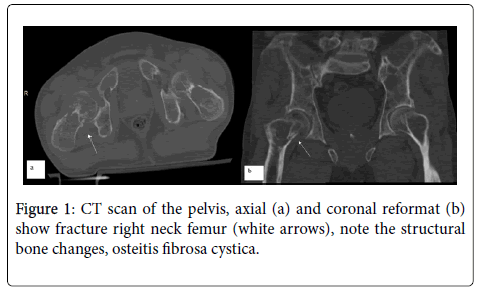 During the hospital stay, he had x-rays for skull, hands, chest, both knees and proximal tibia showed the osseous manifestations of PHPT, he also had 18F-NaF whole-body PET/CT which revealed metabolic super-scan. After about one month of medical support, surgical removal of the cystic neck lesion was done by ENT surgeon, a 5.5 cm cystic mass contain dark coloured fluid was removed. Histopathology showed parathyroid adenoma with cystic degeneration and no evidence of malignant cells. The clinical and biochemical profile of our patient normalized few days after surgery. The patient stayed in hospital for 6 months, during which the bone texture has improved (Figure 5) and the fracture healed but with residual degree of impaired renal function. Since parathyroid cysts are rare clinical entity in routine practice [11], our case was diagnosed as having thyroid cyst. Thyroid function test was done but neither parathyroid hormone assay nor the level of PTH in the cystic fluid was measured.

Ultrasound findings of our case showed that the cyst was inseparable from the thyroid which was atypical for a parathyroid cyst. In a study conducted by Nathan et al [12], it describes the sonographic appearance of 15 cases of cystic parathyroid adenoma: 14 of them appeared to originate from extra thyroid origin and one cyst deformed the posterior border of the overlying thyroid. On colour Doppler the solid nodule and the thick septations were highly vascular, typical of the appearance of the cystic adenoma documented in previous literature [13]. Sonography is crucial in these cases as a primary tool for diagnosis of any neck swelling. The sonographer may have to determine whether a cystic neck lesion is a parathyroid adenoma, cystic thyroid nodule, or other rare cystic neck lesion. The misdiagnosis of cystic parathyroid adenoma as a thyroid nodule or other cystic neck lesion can lead to more-invasive surgery (e.g., four gland parathyroid exploration versus minimally invasive parathyroidectomy) or delay in treatment if the parathyroid adenoma is dismissed as a thyroid cyst [12].

PHPT revealed by pathological fracture, as in our case, is very uncommon [13,14], he had fractured the right neck femur. CT scan (Figure 1) showed all the signs of PHPT, reduced bone density, osteitis fibrosa cystica, sub-ligamentous and subcortical erosions. Follow up XCitation rays after surgical removal of the lesion showed healing of the fracture and improvement in the bone texture (Figure 5).

MRI and CT on the neck were done as a preoperative plan. The localization of the mass, its accurate size and the haemorrhagic nature of the cyst, as well the relationship with surrounding structures are shown on MRI with high soft tissue resolution (Figure 3), CT was done to exclude any superior mediastinal lesion (Figure 4). We refrained from giving any contrast due to renal impairment. CT and MRI are particularly useful for preoperative planning to visualise the relationship with adjacent tissues or the presence of substernal extension [7]. In Conclusion, parathyroid cysts are uncommon, they have atypical sonographic appearance. Awareness of this entity with clinical and biochemical correlation and further ultrasound-guided aspiration of cyst fluid with PTH assay can lead to an accurate diagnosis of parathyroid disease sparing the patient from irreversible complications.

Copyright: © 2020 Hanan Abdulaziz Amr, this is an open-access article distributed under the terms of the Creative Commons Attribution License, which permits unrestricted use, distribution, and reproduction in any medium, provided the original author and source are credited.