Pathology of Fatal Multi-Organ Impairment in a Rottweiler Dog

The aim of this study is to define the main etiological factor(s) which have contributed to the death of a 7 years old Rottweiler male dog. The dog was thought to suffer from cardiac problems and died shortly after admission. External examination revealed pale mucous membranes and subcutaneous edema in the neck and abdominal regions. On evisceration, the liver was enlarged and both kidneys were slightly shrunk with grayish discoloration of their cortices. The wall of the urinary bladder was thickened while the prostate gland enlarged. There was left ventricular hypertrophy and right ventricular dilatation. The left atrioventricular valves showed characteristic features of endocardiosis while the right one had an adhering thrombus on its ventricular surface. Histopathology revealed diffuse chronic proliferative glomerulonephritis, hepatic central congestion, bronchopneumonia, myxomatous degeneration of left atrioventricular valve while the right valve had milder myxomatous changes and an adhering thrombus. The prostate was hyperplasic while the urinary bladder wall hypertrophic. We concluded that the dog has died due to multiple organic malfunctions.

Chronic renal disease and endocardiosis are among the pathological conditions which frequently appear in advancing age in dogs. Chronic renal diseases are frequently recognized renal pathologic process in mature and aging dogs which can be manifested clinically as chronic renal failure and uremia [1]. Chronic renal disease was commonly attributed to chronic interstitial nephritis [2,3] but later, a survey among 76 dogs with chronic renal disease has shown a domination of glomerular disease over non-glomerular disease with no evidence for breed or sex predisposition. Glomerulonephritis may arise spontaneously as an age related change or subsequent to other rather chronic conditions [4]. Endocardiosis on the other hand is a common cardiovascular lesion in dogs and is frequently encountered as an incidental finding at necropsy. The prevalence of the disease increases with age and is of prime importance in small animal breeds. The left atrioventricular valve is chiefly affected and is associated with mitral insufficiency contributing to left side heart failure [1,5,6]. This scientific paper demonstrates and discusses a case of male Rottweiler-mix dog who suffered fatal impairment in the kidneys, heart and lungs along with prostate hyperplasia.

A seven years old Rottweiler-Mix male dog weighing about 45 kg has died shortly after being admitted to the clinic of the Faculty of Veterinary Medicine, University of Tripoli as an emergency case. It was completely off food for the last 10 days and has shown severe weakness and staggering gait. The preliminary diagnosis was that of heart failure and normal saline and antibiotics were given as an instantaneous treatment. Clinical signs included a general health deterioration associated with a drastic loss in body weight over the previous six months. Lethargy, dyspnea, coughing, polyuria, polydipsia and hind leg lameness were observed.

External examination of the carcass has shown anemic mucous membranes and extensive edematous swelling in the face, neck and abdominal regions. On evisceration, the subcutaneous fat was edematous and shown signs of serous atrophy. There was little hydroperitoneum while the liver was enlarged, congested and had roughened surface. The spleen was also enlarged and congested and displayed hyperplasic nodules. The small intestine had segmental shallow peticheations on the serosa while both kidneys were slightly smaller than average and covered by a thick smoky capsule which stripped smoothly. On cut surface, both cortices had finely granular grayish discoloration. The cardiac fat was atrophied and the heart showed right ventricular dilatation and left ventricular hypertrophy (Figure 1). Both atrioventricular valves were distorted. The left one carried changes characteristic of endocardiosis, that is, fleshy white, nodular and contracted with thickening of the chordae tendineae. The right one had similar but less prominent changes with thinner chordae tendineae and an adherent large red thrombus along its ventricular surface. The lungs showed alternate areas of emphysema and atelectasis but the lowermost region in both lungs demonstrated overt hepatization with few sub-pleural abscesses. The prostate gland was enlarged and lobulated while the urinary bladder was contracted with thickened muscular wall (Figure 2). 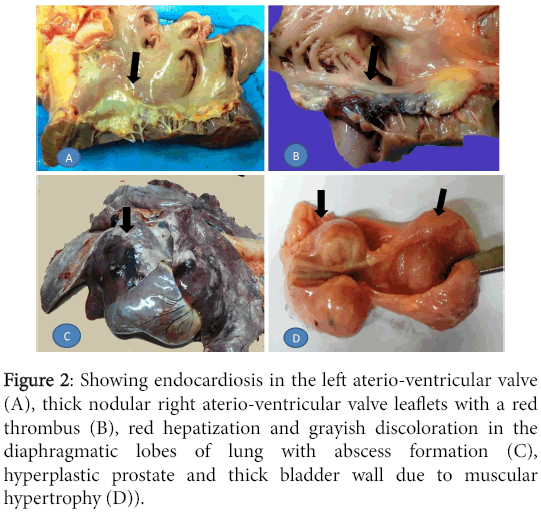 Significant lesions existed in many organs. The kidneys have shown changes characteristic of chronic diffuse proliferative glomerulonephritis. Most glomeruli were voluminous and contained dense hypercellular capillary tuft characteristic of proliferative glomerulonephritis. The urinary space was either distended with eosinophilic proteinaceous substance or was variably obliterated by adhesions between the tuft and Bowman's capsule. The later however, was frequently thickened due to peri-glomerular fibrosis. Completely fibrosed and/or hyalinized glomeruli were abundant (Figures 3 and 4). The convoluted tubular epithelium showed degeneration and necrosis while the collecting tubules were distended with hyaline cast and were lined by atrophied renal epithelium (Figure 5). The interstitium showed mild cicatrization and was infiltrated with multifocal mononuclear cell infiltration. The liver and spleen showed changes characteristic of chronic venous congestion. The central hepatic veins and closer sinusoids were extensively engorged with blood while the centrilobular hepatocytes were vacuolated. Sections from both lungs demonstrated bronchopneumonia, emphysema and thickening in alveolar walls. Multiple areas of infarction and suppuration were also noticed in addition to thrombosed blood vessels (Figure 6). The myocardium had multifocal mononuclear cell aggregations with predominance in plasma cells (Figure 7), while some myocardiocytes and Purkinje cell fibers revealed hyalinization of variable intensity. The left atrioventricular valve displayed myxomatous changes characteristic of endocardiosis (Figure 8) while the right one had milder changes in addition to an adhering fibrinous thrombus (Figure 9). The vegetation had no bacterial colonies and the valve was infiltrated with mononuclear cells. The prostate and bladder showed characteristic changes of glandular hyperplasia and muscular hypertrophy respectively (Figure 10). The gross and microscopic findings have suggested that the pulmonary, cardiac and renal impairment have all taken part in the death of this dog. However, it is difficult to elucidate interdependence between these organs. This is largely because laboratory investigation of blood, urine and other body fluids did not exist. Unfortunately, the dog in this study had no chance for proper investigation and medication. It received symptomatic treatment over a long time which did not prevent general body deterioration. Finally, it was admitted in a semi-conscious state and died soon after. Case history was deficient as well as subsequent lab investigations therefore; discussion will depend solely on the pathological findings.

Hypertrophy and dilatation noticed in the left and right cardiac ventricles are usual outcome of atrioventricular valvular insufficiency due to endocardiosis and vegetative valvular thrombosis respectively. Left ventricular hypertrophy can also result from hypertension following release of renin from chronically damage kidney [7]. Endocardiosis is especially common in older dogs but it is more evident in small and medium size breeds to which Rottweiler does not belong [6]. In some occasions however, we have seen endocardiosis in heavy breed dogs (personal observation). This condition is idiopathic or has no precise etiological factor(s). It is known to affect the left side heart more frequently and it is a degenerative process which does not contribute to thrombus formation [6]. The right atrioventricular valve in our dog had less pronounced gross and microscopic changes of endocardiosis but was associated with a large fibrinous thrombus on its ventricular surface. The absence of bacterial colonies and accompanying inflammatory cells suggest a non- infective thrombotic endocarditis. Such condition in dogs is reported to occur secondary to uremic endocarditis or vasculitis, congenital cardiac defect or cardiomyopathy and is primarily a left heart side issue [5].

The extensive pathological changes in the kidneys confirms proteinuria but does not confirm uremia since it appears later in the course of the disease and requires blood tests for confirmation. Anyhow, the scarce clinical symptoms which we gathered including the drastic decrease in body weight, lethargy, polydipsia, polyuria, dyspnea, coughing and anemia in addition to what we have concluded from the pathological changes including proteinuria and hypo-albuminemia may suggest the existence of uremia. Those criteria were adopted for uremia in many literatures [1,7]. The extensive leak of plasma albumin in the form of hyaline cast in the glomerular urinary spaces and renal tubules provide a strong evidence for proteinuria which contribute for hypoproteinemia. This may explain, in part, the generalized edema which was clearly pronounced in the face, neck, abdomen and peritoneal cavity. Edema could also be secondary to cardiac incompetence and changes in hydrostatic pressure. It was found that hypoproteinemia is not sufficient to explain fluid extravasation and instead, they suggested that either renal tubular retention of Sodium with resultant increase in hydrostatic pressure or a systemic increase in vascular permeability may be the primary responsible defects [8]. Available literatures have documented 3 main kinds of glomerulonephritis according to their etiology. These comprised immune-mediated, spontaneous or familial glomerulonephritis of which the former is most common. In the current case, identification of any type was not possible however; familial type of the disease could be taken into consideration since Rottweilers breed to which this dog belongs is one of eleven breeds known to develop familial glomerulonephritis [9-11]. This assumption is further supported by recognizing peri-glomerular fibrosis followed by proliferative glomerular changes and interstitial mononuclear leukocyte accumulation but have found no immunological basis for the lesion [9]. These pathological changes correspond well with those reported in the kidneys of our dog. It was stated that these breeds of dogs have genetic defect in collagen structure and function (types III or IV) and that although not an immune complex disease; they are characterized by proteinuria and other associated clinical abnormalities of immune-mediated glomerulonephritis [11].

The role of chronic interstitial nephritis is controversial and while some suggest an essential role in causing glomerulonephritis [12], others considered the two conditions are independent [13]. The existence of plasma cells aggregates in remarkable numbers between cardiac muscle fibers and in other organs including the intestine, urinary bladder and the tongue may represent a systemic reactive response against many retained waste product associated with chronic renal malfunction. The multiple lesions in both lungs comprising bronchopneumonia, abscessation, infarction and moderate alveolar edema have certainly interfered with normal respiratory function and added for the general health deterioration. We concluded that this dog has suffered a fatal multi-organ dysfunction.

Copyright: © 2015, Kubba MAG, et al., This is an open-access article distributed under the terms of the Creative Commons Attribution License, which permits unrestricted use, distribution, and reproduction in any medium, provided the original author and source are credited.