Copyright: © 2015 Nfonsam VN, et al. This is an open-access article distributed under the terms of the Creative Commons Attribution License, which permits unrestricted use, distribution, and reproduction in any medium, provided the original author and source are credited.

Background: Despite the decreasing incidence of colorectal cancer (CRC) over the past three decades disparities remain in its incidence, stage at presentation, and efficiency of staging and treatment between different communities, particularly when comparing urban and rural areas. The aim of the study was to assess disparities that exist in CRC outcomes among urban, international border counties, and non-border counties in Arizona. Methods: A retrospective analysis of CRC data from the Arizona Cancer Registry was performed. Data obtained included age, sex, ethnicity, tumor grade, and tumor stage. The data was then categorized into three sections: international border counties, urban counties, and rural counties. The outcome measure was stage of CRC at diagnosis. Results: There were a total of 39, 958 reported incident cases of colorectal cancer from 1995-2010. Of the total incident cases, 53.1% were male and the average age at diagnosis was 69.5. 86.6% were white non-Hispanic, 8.37% Hispanic, 2.4% African American, 1.7% Native American and 1% Asian. There was a significant decrease in the incidence of CRC in all counties, 24.08% in border, 22.5% in urban, and 12.3% in rural. Rural counties showed a higher number of observed cases than expected cases of stage 4 CRC and more unknown diagnosis of grade, stage and lymph node assessment as determined by the adjusted residual. Conclusion: Patients in rural counties are more likely to present with a higher stage of CRC and are less likely to have their cancer adequately staged. This is likely due to lack of better access to healthcare, lack of awareness and poor education and also inadequate specialists.

Colorectal cancer (CRC) is the third most frequently diagnosed cancer and the second leading cause of cancer related deaths in the United States [1,2]. The American Cancer Society estimates that each year, nearly 102,480 new cases of colon cancer cases are diagnosed, while about 50,830 patients die from this disease every year [3,4].

Association between socioeconomic status (SES) and cancer survival is well established and this phenomenon has been described in several different countries using many different measures of SES, including income, education, occupation, health insurance status, and composite indices derived from several individual indicators [5-9]. Despite the efforts, discrimination based on socioeconomic status and location continues to play an important role in colorectal cancer outcomes. According to a recent review, one half of patients in rural areas are not up to date on colorectal cancer screening [10,11]. Moreover, marked disparities persist, with lower rates of colorectal cancer screening among racial and ethnic minorities, individuals with lower household income, lower levels of education, the uninsured, and individuals who were not born in the United States [12-15].

The burden of colorectal cancer in Arizona has not been well defined in the literature, as Arizona does not participate in the SEER database. Geographic location of Arizona State is unique as it has not only rural and urban counties, but also international border counties with Mexico. Addressing health disparities associated with rural residence is an important public health priority in the USA, both generally and for cancer outcomes specifically. Therefore, the aim of this study was to assess a disparity that exists in the incidence of CRC between international border and non-border counties in Arizona.

All hospitals, clinics, and physicians in Arizona report cancer cases, clinical characteristics, and selected demographic information for cases to the Arizona Cancer Registry. We obtained the following data points from the registry: age at diagnosis, gender, race, location of tumor, and stage of disease. The data was then categorized into three sections: international border counties, urban counties, and rural counties with the aims to assess CRC incidence, stage and grade of presentation as well as the crude mortality rates from the CRC.

The urban counties (Maricopa and Pima) include at least one community with a population of 500,000 or greater. Although these counties are classified as urban they also encompass large geographical areas that are rural. The state’s rural areas have been subdivided into two categories: Rural-Urban (RU), those counties that have a community with a population of 50,000 or greater, while the rest of the county is rural, and Rural-Rural (RR), those counties in which all communities have a population of less than 50,000. The international border counties are defined as counties with international borders with Mexico. For the purpose of simplicity, we defined Maricopa as an urban county, and Pima County (an urban county) was included as an international border county. Furthermore, Cochise, Santa Cruz, and Yuma were included in international border counties. While the remaining counties Apache, Coconino, Gila, Graham, Greenlee, La Paz, Mohave, Navajo, Pinal, and Yavapai were included as rural counties. RR and RU counties were grouped as a single entity- Rural. Table 1 highlights the characteristics of the Arizona state counties.

We defined stages of the Colon cancer as following: Stage I: cancer has formed in the mucosa of the colon wall and has spread to the submucosa; Stage II: localized, invades through submucosa; stage III: lymph node involvement, and stage IV: distant spread with metastasis.

Statistical analysis was performed using SAS 9.4. Using logistic regression modeling, differences in tumor characteristics were assessed among different locations in Arizona. Standardized residuals were computed to assess the deviation of observed from expected CRC incidence and staging between different counties. Adjusted residual values (difference between observed and expected values) for the staging of CRC in Arizona were calculated. Values >2.0 were significant for higher observed than expected values. Values <-2 are significant for lower observed than expected values. Values less than 2 indicate less observed cases than would otherwise be expected given an equal and random distribution of incidence and staging, whereas a value greater than 2 suggests a greater number of observed cases than expected. A p-value ≤0.05 was considered statistically significant.

Figure 1 highlights the percentage of CRC incidence in rural, urban, and international counties. 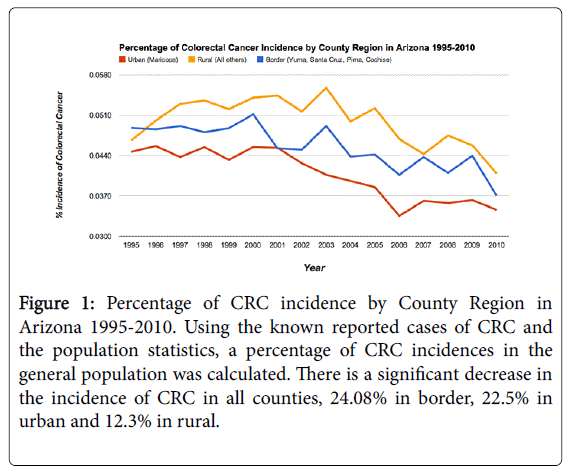 Stages and Grade of Colorectal Tumors

During the study period, the most common stage of diagnosis was stage I (38.4%) followed by stage III (23.6%). On presentation, stage IV was present in 18.6% of the cases. Sub-analysis of stage IV revealed that 72.3% of these patients were located in rural areas, while 21.6% in urban areas. 6.1% of these patients were located in international border counties. Importantly, there were significantly higher than expected stage IV cancers in non-border rural areas. In terms of tumor grade, patients in rural counties were more likely to present with high grade tumor. A trend towards presentation with an “un-staged” disease in patients living in the rural counties (adjusted residual value=1.9) and in counties with international border (adjusted residual value=1.9) was observed. Figures 2 and 3 highlight the grades and stages of CRC in different counties. 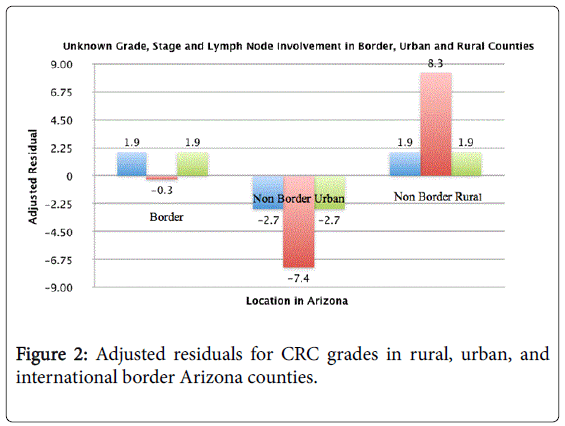 Figures 4-6 highlight the trends in mortality rates in rural, urban and border counties over 10 years. 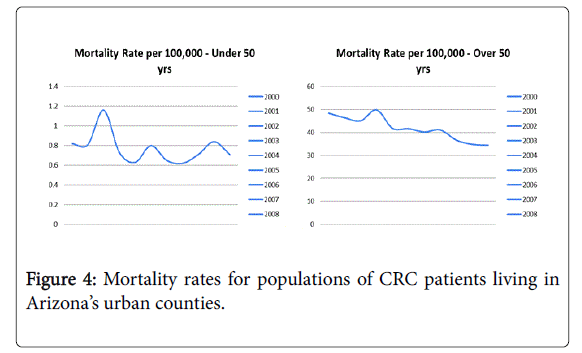 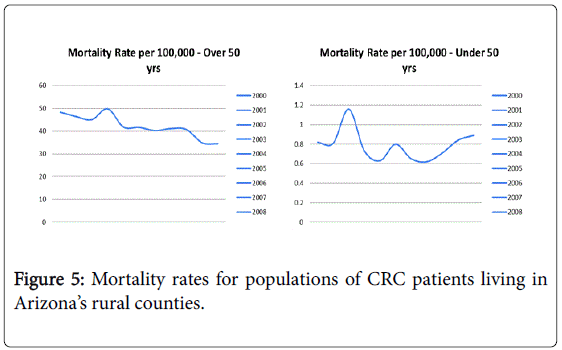 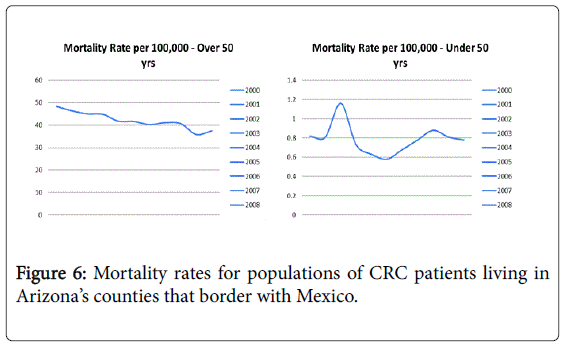 Figure 6: Mortality rates for populations of CRC patients living in Arizona’s counties that border with Mexico.

Our study highlights the differences in CRC presentation and outcomes based on urban rural discrepancies. We found that patients in rural counties are more likely to present with a higher stage of CRC and less likely to have their cancer adequately staged prior to treatment.

Additionally, we observed an increase in CRC related mortality in populations of younger patients. CRC staging is essential in determining the choice of treatment and in assessing prognosis. In our study, we found that rural inhabitants were more likely to have advanced disease at diagnosis, and less likely to have their cancer staged adequately as compared to urban inhabitants. This finding potentially explains the overall higher mortality observed in rural communities, as advanced stage diagnosis is associated with poor outcomes of treatment and higher incidence of mortality. Studies from other countries show that cancer is often diagnosed later, conferring a poorer prognosis in rural areas compared with urban areas. In France, rural patients with colorectal cancer were less likely to be referred to specialized centers or receive adjuvant treatments [16]. For several common cancers in Scotland, including colorectal cancer, distance from a cancer center was associated with less chance of diagnosis before death [17]. In a recent study analyzing the difference in CRC outcomes in rural population in UK, authors found examples of delays of up to 2 years from diagnosis to treatment of CRC in rural areas. They also showed that these patients presented with a higher stage of cancer and often had perceived their symptoms to be trivial or had been accepting of a benign diagnosis over a long period of time [18]. Furthermore, rural patients also tend to have lower expectations when evaluating their care, and be less demanding of referrals to specialist centers. Similarly, we also believe that lack of patient knowledge level about colorectal cancer screening, and the impact of early treatment on outcome is an important hurdle in CRC outcomes in this patient population. Delay in presentation, limited awareness, and difficulty navigating complex healthcare systems are all likely contributors to the higher rates of mortality seen in these communities.

There are several aspects of the rural environments/lifestyle among our study participants that may help explain the findings of our study. Rural residents in Arizona may face greater chemical, biological, or psychosocial risk factors that contribute to greater CRC risk. For example, they may be exposed to chemical and environmental pollutants via their geographic residential proximity to farms or by working on farms. Alternatively, rural populations may have fewer adaptive resources available to them. Future studies are needed to assess residence and geographic spatial patterns in more detail and include measurement of factors such as population density, aggregate and individual-level sociodemographic factors, and specific environmental exposures such as pesticides and other chemicals as well as pharmacologic agents such as hormone replacement therapy, aspirin, and nonsteroidal anti-inflammatory agents that could differ by place of residence

Rural communities have been shown to have limited access to medical services, fewer cancer prevention activities, and fewer physician visits per year than their urban counterparts [19-22]. Only about 10% of the physicians in United States practice in rural areas despite the fact that one fourth of the US population lives in these areas. More specifically, 8.7% of the active specialist surgeons in the US work in rural areas [20,23]. Previous studies have reported that rural residents enter the health care system later and with later stages of disease than urban residents [20]. These reasons may be contributing the differences observed in our study.

Observations presented in this manuscript should be interpreted in the context of its limitations. We performed a retrospective analysis of a large cancer database. This study could not establish the mechanisms underlying the observed sociodemographic disparities and outcomes. In addition, we did not study the relationship based on racial differences, as several studies have highlighted that racial differences are a significant factor in the incidence of CRC. Furthermore we were unable to compare clinical outcomes among patients across the three regions (urban, rural, and internal bordering counties).

Patients in rural counties are more likely to present with a higher stage of CRC and less likely to have their cancer adequately staged. These observations are likely multifactorial, and include limited access to primary healthcare and specialists, lack of awareness, and education concerning disease presentation. Larger policy efforts to provide coverage for education, screening, diagnosis, and treatment in rural areas are critical for implementing adequate colorectal cancer screening for this at risk population. 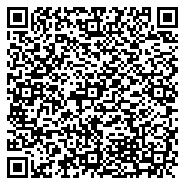