Introduction: Peripartum cardiomyopathy is a rare cause of dilated cardiomyopathy occurring in late pregnancy or in the months following delivery. The aim of this work was to analyze the epidemiological, clinical and evolutionary aspects of peripartum cardiomyopathies at Ziguinchor Peace Hospital.
Patients and methods: We conducted a prospective descriptive study at the Peace Hospital Medicine Department between March 2015 and May 2017. It involved women with heart failure between the 8th month of pregnancy and the first 5 months postpartum.
Results: Sixteen patients were registered. The average age was 26.75 years old. The majority of our patients were at a low socioeconomic level (75%) and multiparous (75%). The onset of the disease was observed in the first trimester postpartum, in the majority of cases (61.5%). The consultation time was late with an average delay of 54.81 days and symptoms were dominated by exercise dyspnea. Electrocardiographic abnormalities were dominated by sinus tachycardia (50%). In the cardiac Doppler echo, the average diastolic diameter of the left ventricle was 59.7 mm and the average left ventricular systolic function was 34%. Therapeutic management relied mainly on diuretics (100%) and angiotensin-converting enzyme inhibitors (100%). The average duration of hospitalization was 6.31 days.
Conclusion: Peripartum cardiomyopathy is a serious, often underdiagnosed, complication during pregnancy. Its unpredictable evolution justifies early and optimal management.

Peripartum cardiomyopathy (PPCM) is a rare entity defined as systolic heart failure occurring in the last month of pregnancy or the first five months postpartum, in the absence of known etiology or preexisting cardiac disease [1,2]. Its incidence is variable and seems more important in black African women [3]. PPCM appears to be common in Africa, but epidemiological data are lacking, particularly in Senegal in its southern region.

We report the results of this study whose objective was to go over the epidemiological, clinical, paraclinical and evolutionary aspects of the PPCM in Ziguinchor, southern region of Senegal.

This was a prospective descriptive study that took place over a period of 26 months (March 26th, 2015 to May 16th, 2017) at the Cardiology Unit of Ziguinchor Peace Hospital. All women, regardless of age and race, who had clinical signs of heart failure (HF) in the last month of pregnancy or in the first 5 months postpartum, were included in the study. The other criteria were : no identifiable cause and the cardiac Doppler echo signaled impaired left ventricular systolic function left ventricular ejection fraction (LVFE) <45% and left ventricular internal diastolic diameter (LVIDD) ≥ 53 mm or >32 mm/ m2. The study excluded all women who had an onset of HF before the eighth month of pregnancy or after the first six months postpartum, and women with known heart disease or any other cause of HF. We had prepared a survey card for the collection of demographic data, prenatal check-books data, cardiovascular risk factors, the mode of onset or decompensation of the HF, the mode and course of delivery, the data of the physical and paraclinical examinations. Systematic chest radiography, electrocardiogram, cardiac echo-doppler, blood count, blood glucose, serum creatinine, serum uric acid, proteinuria, blood ionogram and HIV serology were routinely requested. The data was analyzed using SPSS software in version 22.

We had a total of 16 PPCM cases during the study period. The average age of our patients was 26.75 years (range 18-46 years). Patients over the age of 30 accounted for 37.5% of cases. PPCMs accounted for 6.6% of all cardiomyopathies and 5.1% of heart failure causes. Our patients were all black, with no occupation (81.3%) and at low socioeconomic level (75%) in majority. Multiparas were the most represented (56.2%) with an average of 2.56 deliveries (range 1 to 6). In addition, twinning was only found in one patient and delivery was normal for the majority of our patients (93.8%). A pregnancy hypertension was found in 4 of our patients (25%).

The symptoms appeared postpartum in all our patients and in a period of 1 to 3 months postpartum in majority (62.5%) (Figure 1). The consultation time was late in the majority of cases with an average delay of 54.81 days (range from 11 to 120 days). The symptoms were dominated by exercise dyspnea (Table 1). In half of the cases, it was a left cardiac decompensation (50%). The physical signs were dominated by tachycardia (62.5%) and crackling rattles (62.5%) (Table 2). 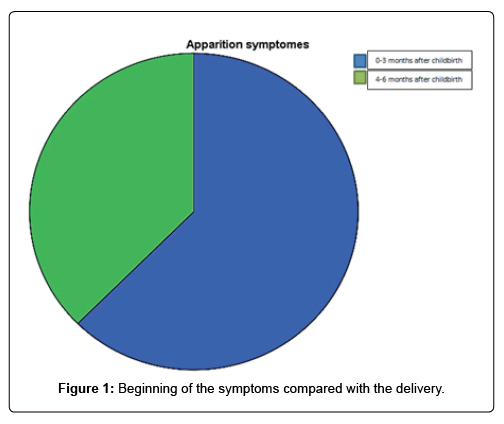 Figure 1: Beginning of the symptoms compared with the delivery.

The average duration of hospitalization was 6.31 days (range 2 to 16 days). The evolution was favorable in the majority of the cases (87.5%) with regression of the clinical signs of cardiac insufficiency on leaving hospital, and we had to note 2 deaths during the hospitalization.

In our series, the average age of our patients was 26.75 years, lower than that reported by most authors [4] who found an average age greater than 30 years. However more than a third of our patients were over 30 years old. The other risk factors for PPCM found in our series were black race, multiparous, and adverse socioeconomic conditions, in agreement with several studies [5-8]. However, risk factors such as twin pregnancies and pregnancy-induced hypertension can not be formally included in our study. The classical risk factors associated with the risk of PPCM occurrence are maternal age (>30 years), multiparity, twin pregnancies, African descent, obesity, high blood pressure and prolonged tocolysis (>4 weeks) [9].

In our series, symptoms appeared within 1 to 3 months after delivery with an average consultation time of 54.81 days, which is found in several studies [10]. Minimal decompensation following delivery may be more difficult to recognize as signs such as asthenia, lower extremities edema or dyspnea are typical clinical symptoms or signs at the end of pregnancy or during the early postpartum period. That may explain the delay in consultation. The subacute onset of these signs or their abnormally rapid progression must nonetheless always raise the diagnosis of PPCM and lead to echocardiography. The clinical manifestations of patients suffering from PPCM do not have any particularities, specially in case of acute decompensation. In our study, we found classic clinical signs of cardiac decompensation dominated by New York Heart Association (NYHA) Stage IV dyspnea as found in other studies, probably due to late consultation.

The most common electrocardiographic signs found in our study were sinus tachycardia, left ventricular hypertrophy, and left branch blocks in a lesser proportion. These signs are reported by several authors. The electrocardiogram (ECG) is systematic in case of any cardiovascular symptomatology; however, it does not show any specific signs during the PPCM. At most, it can show QRS complex enlargement and left bundle branch block in about 30% of cases. It can also show a negation of the T waves from V4 to V6.

Cardiac ultrasound showed LV dilatation and impaired LVEF in all our patients with average LVIDD of 59.7 mm and average LVEF of 34%. Transthoracic echocardiography is the key examination, it allows to assert the diagnosis and monitor the evolution of the PPCM. It showed a ventricular dilatation, a decrease in the ejection fraction of less than 45%, a possible right ventricular involvement. It will look for complications such as intra-cavitary thrombosis and associated pericardial effusion. Finally, it will eliminate pre-existing cardiac diseases (hypertrophic, rheumatic valve, ischemic). The treatment was mainly based on diuretics and angiotensin-converting enzyme (ACE) inhibitors. The use of beta - blockers was still low, probably because of the limited availability of appropriate dosages in pharmacies in Ziguinchor, and the cost of beta - blockers in mostly low socioeconomical situation patients. The decompensation drug treatment has no specificities, it combines diuretics, ACE inhibitors and betablockers. Depending on the severity of the initial ventricular dysfunction, anticoagulation may be initiated, as arterial thromboembolic complications have been reported and some teams recommend the establishment of systematic effective anticoagulation if the systolic function is less than 35%. Bromocryptine treatment appears to be a good prospect in reducing mortality and improving recovery of cardiac function. In our study, no patient received this treatment.

The average hospital stay in our serie was 6.31 days shorter than those found in other authors, probably due to the patients clinical profile, with more cases of global heart failure than in our series. We had 2 in-hospital deaths in our serie, but the other patients had progressed favorably with regression of signs of heart failure at the time of discharge.

The first studies reported mortality of up to 50% of patients, with half of deaths occurring during the first 3 months postpartum.The better knowledge of this situation and the systematic treatment by ACE and betablockers seem to have transformed the prognosis. The overall prognosis of the PPCM is therefore better than that of other forms of dilated cardiomyopathy. The factors considered to be of poor prognosis are the magnitude of initial left ventricular dysfunction (LVEF <30%) and left ventricular dilatation (>27 mm2) [11].

If we consider these data, we will say that all our patients had a poor prognosis. However, the prediction at the individual level remains delicate and it is conventional to observe recoveries ad integrum even in patients with severe initial systolic dysfunction. Progression in the event of a new pregnancy is unpredictable with a major risk of worsening cardiomyopathy and a higher risk of preterm birth. Contraception is therefore essential in these young women in the wake of a first episode of PPCM [12-16].

PPCM is a rare cause of heart failure whose etiology is uncertain. Our study showed that its diagnosis is late with a delayed consultation time. The diagnosis is of elimination and one must know how to think about it in front of any picture of heart failure occurring in a peripartum context for a young woman. Its evolution is unpredictable and there is currently no specific treatment for a complete recovery of myocardial function. Long-term follow-up is essential and the potential risk of a new pregnancy should be discussed with the patient.

The authors do not declare any conflict of interest.

Copyright: © 2018 Simon M, et al. This is an open-access article distributed under the terms of the Creative Commons Attribution License, which permits unrestricted use, distribution, and reproduction in any medium, provided the original author and source are credited.