Copyright: © 2013 Melendez MM, et al. This is an open-access article distributed under the terms of the Creative Commons Attribution License, which permits unrestricted use, distribution, and reproduction in any medium, provided the original author and source are credited.

Common peroneal nerve compression are caused by prolonged immobility, habitual leg-crossing, and pressure against hard surfaces [1,2]. Athletes may develop peroneal nerve damage as a result of the firmness of their leg musculature causing chronic compression. Sportsrelated injuries to the peroneal nerve rarely have been reported to result from minor muscle trauma and overuse [3]. We describe three cases in which branches of the peroneal nerve were compressed from figure skating related activities.

A 14-year-old female figure skater presented with right foot drop which she developed over several months. She initially noticed weakness in her toes. This progressed over three months until she was unable to extend her toes, limiting her skating ability. Physical exam revealed diminution in sensation over the first dorsal web space and the dorsolateral foot. She had weakness of ankle dorsiflexion and toe extension. Distal tingling on percussion over the right common peroneal nerve at the fibular head (positive Tinel sign) was elicited. Compression of the common peroneal nerve was suspected clinically and confirmed by electrodiagnostic testing. Consequently, the anterior tibialis muscle as well as the extensor hallucis longus was most likely affected. An MRI demonstrated mild swelling of the common peroneal nerve proximal to the fibular head. At surgical exploration, she was found to have a flattened common peroneal nerve at the level of the fibular head (Figures 1 and 2). 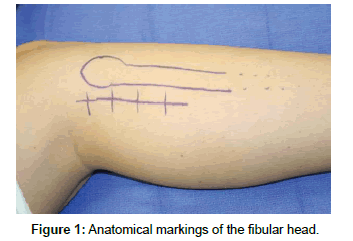 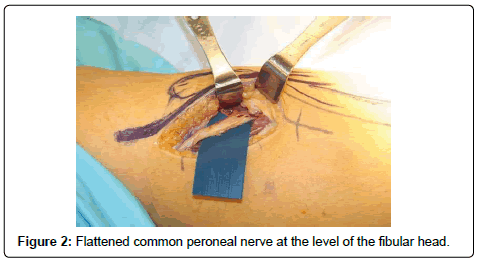 Figure 2: Flattened common peroneal nerve at the level of the fibular head.

At examination, three months later the patient was able to ambulate without dragging her foot. On examination there was mild atrophy of the anterior compartment musculature of the right lower extremity. The patient was able to extend her toes with improved strength. Sensation in the distribution of the superficial and deep peroneal nerves was now equal to the contralateral side.

By six months after surgery, she had returned to figure skating at her previous level of function.

An 18-year-old female figure skater, who had been ice skating since age 5 was seen because of pain over the dorsum of her right foot. At that time she was competing at the national level and practicing at an Olympic training center. The patient had been treated for a stress fracture of the right foot. In addition, she attempted to relieve some discomfort over the dorsum of her right foot by changing skates and lacing techniques. However, she continued with pain over the dorsum of her foot, with radiation into the dorsal web space between the first and second toes. This prevented her from doing her figure skating jumping routines. Physical examination demonstrated a positive tinel sign at the junction of the first and second metatarsals with the cuneiform. The patient was diagnosed by the senior author with chronic compression of the deep peroneal nerve which required neurolysis. At examination, post-op she had marked relief of the pain of her right foot. She subsequently became a professional figure skater, touring internationally. Two years later, following an inversion sprain of the left ankle, she developed pain from the knee to the top of her foot. Despite conservative management of the ankle sprain itself, she was unable to continue with her figure skating tour schedule due to this pain. The right foot, operated on previously, was no longer causing discomfort. When examined, she had a positive Tinel sign over the common and superficial peroneal nerve in left lower extremity. In addition, there was weakness in the extensor hallucis longus. Neurosensory testing with the Pressure-Specified Sensory Device (Sensory Management Services, LLD, Baltimore, Maryland) demonstrated abnormality over the dorsal foot and dorsal lateral aspect of the left foot with two-point discrimination and elevated cutaneous pressure threshold for the left deep peroneal nerve ( 9.9 mm at 68.7 gm/mm2, normal being 5 mm at 8 gm/mm2 ) [4] (Figure 3).The patient later underwent a neurolysis of the common peroneal nerve at the knee, and of the superficial peroneal nerve due to entrapment of these nerves (Figures 4-6). She was able to return to the tour after intense physical therapy and continues as a professional figure skater now one year later (Figure 7). 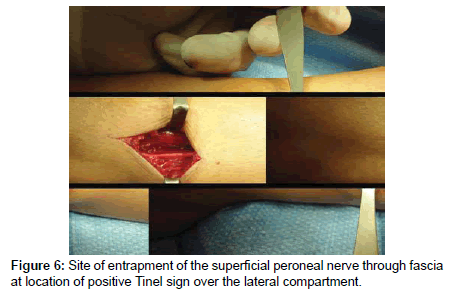 Figure 6: Site of entrapment of the superficial peroneal nerve through fascia at location of positive Tinel sign over the lateral compartment. A 14-year-old female, who had been ice skating since she was age 5, was seen because of pain over the dorsum of her left foot as well as pain in the web space between the 2nd and 3rd toes. These symptoms had been present for approximately 3 years. Stress fractures had been diagnosed in the 2nd and 3rd toes. The left foot was used to land her jumps. Her dorsal foot pain went from the mid-dorsum into the 1st and 2nd web space. Physical examination demonstrated a positive Tinel sign over the deep peroneal nerve at the junction of the 1st and 2nd metatarsals with the cuneiform. She also had a positive Mulder’s sign (popping sound and pain as swollen nerves move against the intermetatarsal ligament) on palpation of the common plantar digital nerve proximal to the 2nd and 3rd metatarsal heads. Neurosensory testing with the Pressure- Specified Sensory Device (Sensory Management Services, LLD, Baltimore, Maryland) documented abnormal two-point discrimination and elevated cutaneous pressure threshold for the left deep peoneal nerve (8 mm at 71 gm/mm2, normal being 5 mm at 8 gm/mm2) [4]. A diagnosis of entrapment of the deep peroneal nerve over the dorsum of the foot, and compression of the common plantar digital nerve of the 2/3rd web space was made. The patient had neurolysis of each of these nerves. The interdigital nerve was not excised: the ligament between the two metatarsal heads was divided.

She subsequently returned to competitive figure skating placing in the regional competition, and remains one year later without symptoms in this foot.

Compression neuropathies of the lower extremity are recognized to be as disabling as in the upper extremity [2,5]. Peripheral entrapment neuropathies occur in high frequency and present clinically with a wide range of variations [6-8]. They need to be recognized early enough to initiate correct therapy and to obviate irreversible neurological sequelae [2,6-8].

External compression of the peroneal nerve at the fibular head can occurred secondary to a number of cases in which the peroneal nerve is compressed against the fibula by the tendonous edge of the peroneus longus muscle. The causes of most entrapment neuropathies in the lower extremity may be divided into two major categories: (a) mechanical causes, which occur at fibrous or fibro-osseous tunnels, and (b) dynamic causes related to nerve injury [6,7,9-12]. The common peroneal nerve is particularly prone to entrapment because it is fixed in position around the fibular head [13].

Superficial peroneal nerve may become entrapped as the nerve pierces the deep fascia of the lower leg. This is commonly seen in dancers, in whom the nerve may become stretched during inversion or plantar flexion injuries. Common causes predisposing to superficial peroneal nerve injury at this location are thickening of the fascia and tenting of the nerve due to a fascial defect with or without secondary muscle herniation.

The most common site for deep peroneal nerve compression, along the dorsum of the foot, occurs in the region of the first and second tarsometatarsal joints as the medial branch of the DPN traverses a narrow fibro-osseous tunnel between the extensor hallucis brevis tendon and the deep fascia. Entrapment occurs as the tendon crosses over the nerve.

Figure skaters due to the muscular development of their lower extremities, repetitive motion and frequent ankle and knee injuries appear to have a higher risk for stretch/traction and compression neuropathy of the peroneal nerve. We postulate that the method by which this occurs in figure skaters is due to mechanical injury and entrapment of the peroneal nerve due to fascial tightening. The MRI findings for Case #1 support this hypothesis by demonstrating swelling of the common peroneal nerve proximal to the fibular head.

A review of the literature did not reveal any reports of similar sportrelated injuries in skaters. Electrodiagnostic testing and imaging studies may be used in conjunction with validation of clinical assessment to determine the level of damage to the peroneal nerve. However, these studies may not be necessary when the symptoms and physical findings support the clinical diagnosis.

Surgical intervention requires neurolysis along the axis of the peroneal nerve depending upon the site of entrapment, which may be at more than one location. If there are two areas of compression a double crush phenomenon is established. The anatomic variability of the peroneal nerve must be taken into consideration so that an effective release can be done [12-16]. Dellon’s results after release for entrapment of the deep peroneal nerve’s sensory branch over the dorsum of the foot in eighteen patients followed a mean of 25.9 months after surgery were excellent in sixty percent of these patients, good in twenty percent, and not improved in twenty percent [7].

Although figure skating is an uncommon cause of compression neuropathies of the lower extremity awareness of its diagnosis and treatment can provide promising outcomes, returning athletes to skating again. Peroneal nerve injuries may be more common than is currently appreciated in skaters.