Copyright: © 2016 Raquel CT, et al. This is an open-access article distributed under the terms of the Creative Commons Attribution License, which permits unrestricted use, distribution, and reproduction in any medium, provided the original author and source are credited.

Objective: Main objective of this study is to review the effectiveness and safety of rehabilitation interventions following CTS release compared with another intervention.

Methods: Potentially relevant literature was identified through computerized and manual searches from January 1996 until March 2016. Inclusion and exclusion criteria of the studies were well established and results were analyzed using a rating system with levels of evidence for each extracted outcome.

Result: Twelve articles with a total of 576 patients met all eligibility criteria and were included in the review.

Conclusion: There is insufficient evidence to support a suitable type of treatment after release of the median nerve because the limited and very low-quality evidence is available for rehabilitation treatments following carpal tunnel release (CTR).

Carpal tunnel syndrome (CTS) is the most common compressive neuropathy affecting the upper extremity. Defined as median nerve compression at the level of the wrist, CTS causes numbness and tingling in the hand and fingers and evidence-based guidelines for its treatment are lacking [1,2]. Symptoms include paresthesia involving the median nerve distribution along with a deep aching pain in the hand and wrist, and nocturnal pins which often causes the patient to wake at night [3,4].

The treatment of CTS is different based upon the severity of syndrome and it often is categorized as either conservative or surgical.

In the early stages of CTS, conservative treatment is recommended to improve quality of life. Some authors advocate the use of comprehensive multi-component therapy programmes to promote early return to function and work consists of rest, splinting, patient education, exercise prescription, mobilization techniques, B vitamins, job changes and ergonomic modification or anti inflammatory medication [3,5-7].

Surgical treatment is generally recommended for those with severe CTS [6,8,9]. The basic principle of carpel tunnel surgery is to increase the volume of the carpal tunnel temporarily by dividing transverse carpal ligament to release the pressure on the median nerve [4]. Complications following CT release are describe in the literature and the persistence of symptoms is the most common complication after CT release (CTR) [10-12].

The decision to provide rehabilitation following CTR should be based not only on the clinician's expertise, the patient's preferences and the context of the rehabilitation environment but also on the evidence. The goal of postoperative rehabilitation is to speed up and enhance symptom resolution and functional recovery following surgery [12].

Some studies suggest different postsurgical treatment intervention in order to allow patients to return to their normal activities with a minimal absence of nuisance pathology after CTR. Scar treatment, strategies for action against edema, passive, assisted and active mobilization, strengthening and development of functional exercises as well as gradual improvement activities are some of the recommendations described in the literature.

Although the evidence base for rehabilitation following CTR has grown, evidence and guidelines for the use of any of these interventions after CTR are limited.

Main objective of this study is to review the effectiveness and safety of rehabilitation interventions following CTR compared with another intervention in order to provide a complete, exhaustive summary of current literature relevant to treatment after CTR.

The following electronic databases were searched through January 1996 until March 2016 (20 last years): PubMed, EMBASE, Cochrane Central Register of Controlled Trials, CINAHL, Physiotherapy and Evidence Database (PEDro). The literature search was performed by selecting clinical trials and systematic reviews based on the post - surgical procedure used in patients with carpal tunnel. The titles and abstracts of identified articles were checked against pre-determined criteria for eligibility and relevance to form an inclusion set.

Selection of the studies

Were included all studies with participants over 18, diagnosis of CTS (as defined by the authors of each study) who have been operated, endoscopically or via any open technique who have received postoperative rehabilitation treatments as: manual physical therapy, exercise, desensitization, orthosis, scar management, edema management, electrotherapy, passive physical modalities and ergonomic modification that used as outcome measurement the Boston Carpal Tunnel Questionnaire (BCTQ), Disabilities of the arm, shoulder and hand questionnaire (DASH), pain referred by the patient, return to work or occupation and grip and pinch force.

Results were analyzed using a rating system with levels of evidence for each extracted outcome [13]. These levels are:

• No evidence from trials.

Figure 1 reports the search strategy, number of studies retrieved and the number of studies excluded. Using as keyword carpal tunnel syndrome 1599 studies was identified. In a first analysis we identify 35 duplicated articles. 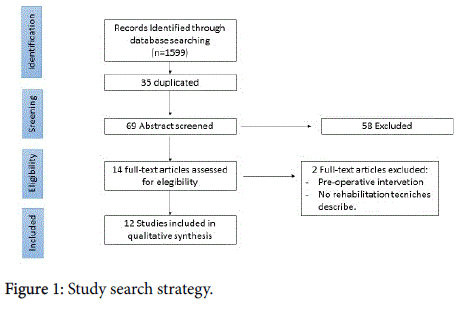 After reading tittle and abstracts 127 studies were eliminated because they did not meet the inclusion criteria. Eleven-teen full text articles were assessed for eligibility. Two of them did not meet the inclusion criteria because did not address post - surgical recovery techniques. Twelve articles with a total of 576 patients met all eligibility criteria and were included in the review. The quality of eligible studies is report in Table 1.

The purpose of this review was to determine the effectiveness of various rehabilitation treatments to optimize outcomes following CTR compared with no treatment, placebo, or another non-surgical intervention. We included 12 articles investigating a total of 576 participants.

Regarding type of immobilization, some investigations compared two different types of immobilization after CTR [14,15]. Although measures of variability were limited in both studies, Bury et al. in a no blind study, found no beneficial effect from postoperative splinting after open carpal tunnel release when compared to a bulky dressing alone. Instead, Bhatia et al. performed a prospective randomized single blind trial with 102 patients in order to see if plaster slab could reduce postoperative pain using it at the first 48h after surgery. No statistically significant differences between the two groups in postoperative pain scores or analgesic.

Others studies, compared the effect of immobilization of the wrist following CTR with early mobilization. Cook et al. ( n=50), compared exercises versus splint at the first 2 weeks after surgery finding that splinted group had significant delays in return to ADL and in recovery of grip and key pinch strength. In splinting group, they also found increased pain and scar tenderness in the first month after surgery compared with early mobilization group [16]. Other studies that compared the effects of early mobilization after CTR concluded that there were no differences between groups [17]. But the lack of an appropriate randomization and the longtime of immobilization (four weeks) should make us take into consideration the results with caution. Martins et al. [18] conducted a prospective study in order to see the effects of wrist immobilization after open carpal tunnel release with 52 participants. They found no significant difference between the two groups for discrimination test, function or pain intensity. No measurements as grip or pinch force were taken in spite of the fact that some studies support a grip strength decreased by 19–25% when the wrist is splinted [19]. Other research conducted by Cebesoy et al. [20], disagree with the studies mentioned above and concluded that there are no benefits in the post-surgery immobilization and that used of splint is more expensive than a bulky dressing. In addition, report that 80% of participants in the splinted group experienced discomfort compared to none in the mobilization group, which was a statistically significant difference. However, non-specific data on the design of the splint or materials used are provided.

Regarding the use of ice therapy, we identified one randomized trial that compared effects of controlled cold therapy (CCT) versus ice therapy commenced immediately post-surgery and continued for three days. Hochberg et al. [21], evaluate and compare the effects of CCT and conventional ice therapy on pain, edema, and narcotic use. The results show that CCT is more effective than conventional ice therapy in providing efficient pain blockage and reduction of edema in postoperative management of carpal tunnel surgery. However either participants or researcher were blinded during the experiment, which could influence the results of the study.

Low-level laser therapy after CTR were also investigated by Alves et al. [23] whit a quasi-randomized trial. Outcomes measurement used in this study were: palmar pain, pillar pain, paresthesia, nighttime pain, pain or discomfort at the site of the scar and tinnels test, as well as time taken to return to activities of daily living or to work. In spite that authors of the study concluded that the patients submitted to low-level laser therapy after surgical release of the flexor retinaculum in the wrist benefited from the treatment and obtained better functional results than those from the control group, no statistically significant differences in CTS symptoms with low-level laser therapy versus placebo and no differences between groups in the return to work outcome at three months post-surgery were found.

Others studies as Gordon et al. [24] and Li et al. [25] try to demonstrate the effectiveness of electrical stimulation versus control or versus decimeter wave therapy versus no treatment control group. Although both authors conclude that there are benefits in the use of electro stimulation in the post-surgery of carpal tunnel treatment, measuring instruments not provide suitable to be able to validate the results [26,27].

Despite the diminution of symptoms after carpal tunnel surgery, there is limited and very low-quality evidence available for rehabilitation treatments following CTR. The various techniques described and lack of studies that can test the effect of a single technique without influence from the other, makes it difficult to interpret the studies.

According our results, immobilization with a rigid brace for 2 weeks can cause pain and loss of strength as well as a delayed return to work.

Regarding the use of ice therapy, controlled cold therapy is more effective than conventional ice therapy in providing efficient pain blockage and reduction of edema in postoperative management of carpal tunnel surgery.

Other techniques that could help in recovery after CTR could be: ultrasound and laser therapy combine with exercise or electrical stimulation.

We have no found RCTs who evaluated the efficacy of different treatments used in rehabilitation such as mobilization techniques, strengthening, ultrasound, nerve gliding, massage…), so we can’t draw conclusions about the overall efficacy of rehabilitation interventions after CTR. Studies with large samples and the power to detect statistically significant differences between groups are needed to determine the effects of interventions.

Conflicts of Interest and Funding

No actual or potential conflict of interest exists and no external financial support was sought or received for the conduction of this review.