2University of Medicine and Pharmacy of Craiova, Craiova, Romania

Copyright: © 2016 Iordaconiu L, et al. This is an open-access article distributed under the terms of the Creative Commons Attribution License, which permits unrestricted use, distribution, and reproduction in any medium, provided the original author and source are credited.

We have obtained polymeric membranes based on silicone rubber, stearic acid, silicone oil at various concentrations of catalyst. The obtained polymeric membranes are used as dielectric materials for fabricating plane capacitors. By using the plane capacitor method, we measure capacitance C and dissipation factor D of the plane capacitors in an electric field of medium frequency. From the obtained data we calculate the dispersion and absorption characteristics of the membranes. We show that these characteristics are sensibly influenced by dimensions of the crystallites which in turn, depend on the concentration of catalyst used at polymerization of silicone rubber.

Membranes are materials used frequently in fabrication of devices for liquid phase transfer [1-7] with small energy consumption from one side to another. Inspired mainly from biology, membranes are fabricated from metals and ceramics [1-4], and in last years an important source of fabrication has become composite polymeric membranes [5-7]. The selective transfer of phases through membranes is realized by various methods: pressure and concentration gradient, electric field etc. Based on these methods, the main applications are in water desalination and filtering, blood detoxification etc.

Recently, porous membranes have been fabricated by polymerization of Silicone Rubber (SR) at various concentrations of catalyst (CA) [8,9]. It was shown that dielectric properties, as well as pore’s diameters, density and distribution are sensibly influenced by the volume concentration of the catalyst.

In this paper, we underline the mechanisms leading to dielectric properties of interest for various technical and medical applications of polymeric membranes based on SR, stearic acid (SA), silicone oil (SO) and various concentrations of C.

The materials used for fabricating the membranes is SR (RTV 3325 type) with CA, from Bluestar-Silicone [10] and SO and SA from Merck [11]. For well-chosen quantities of SR, SO and SA, a viscous and liquid mixture is prepared following the method described in Reference [8,9]. From this mixture we take four samples of equal volumes. Then, each mixture is again mixed and homogenized with a different quantity of CA. Finally four samples of liquid solutions are obtained, as following:

Capacitors Ki (i=1, 2, 3, 4) are connected, in turn, to the RLC – meter type NM 8118. One measures the capacitance C and the dissipation factor D in an electric field with frequencies between 10 kHz and 200 kHz. The obtained values are plotted in Figure 1. A general feature is that the data C=C (f) can be approximated by a second degree polynomial. A second important feature is that the capacitance increases with increasing the electric field frequency and is sensibly influenced by the volume fraction of the catalyst. Variation of the dissipation factor of the capacitors Ki (i=1, 2, 3, 4) is characterized by three distinct regions (Figure 1). The length of each region depends on the volume fraction of the catalyst and by the frequency of the electric field.

The relative dielectric permittivity of the dielectric between the plates of the capacitors is calculated according to:

Using the dependence Ci=Ci(ω=2πf) from Figure 1, into Equation (1’) we obtain the permittivity Ei=Ei (ω), as shown in Figure 2. The main feature is that the relative dielectric permittivity of the membranes increases with the frequency and is sensibly influenced by the volume fraction of the catalyst. Introducing into Equation (2) the dependence Ci=Ci(ω=2πf) from Figure 1, and respectively the dependence Ei ’ = Ei ’ (ω), from Figure 2, we obtain the variation of the dielectric loss factor Ei ’’ =Ei ’’ (ω), as shown in Figure 3. The results show that the dielectric loss factor of the membranes is characterized, as in the case of the dissipation factor D, by three distinct ranges whose length depends on ω and on the volume fraction É¸. 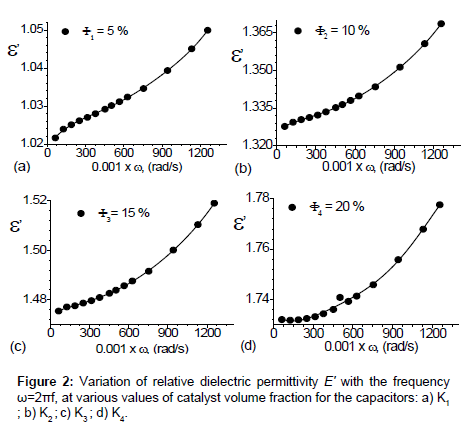 Figure 2: Variation of relative dielectric permittivity E' with the frequency ω=2πf, at various values of catalyst volume fraction for the capacitors: a) K1 ; b) K2 ; c) K3, and d) K4. 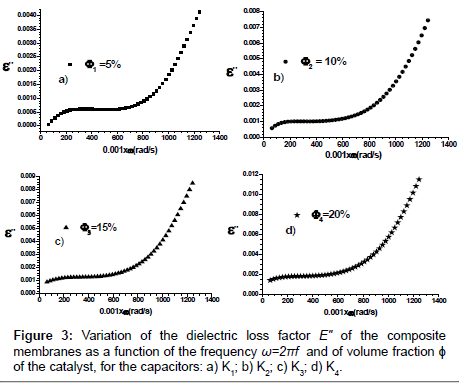 Figure 3: Variation of the dielectric loss factor E" of the composite membranes as a function of the frequency ω=2πf and of volume fractionÉ¸ of the catalyst, for the capacitors: a) K1 ; b) K2 ; c) K3, and d) K4.

In the framework of the Debye theory for dielectrics with a single relaxation time, the quantities Ei’ and Ei ’’ are the real part (dispersion characteristic), and respectively the imaginary part (absorption characteristic) of the complex relative dielectric permittivity [12,13].

, Ti is the relaxation time of dielectric polarization, and i=1, 2, 3, 4. From the second part of Equation 3, we obtain the equalities 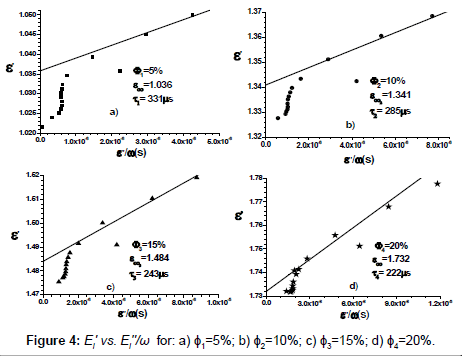 Then, under the influence of electric field, the crystallites begin to rotate inside the matrix. In a first approximation, we consider also that the viscosity Æž of the elastic matrix is not influenced by the volume fractions É¸i of the catalyst. Thus, the energy used for the friction is given by

Then, the relaxation time Ti in the absence of Mosotti field is given by [12]

Where kB is Boltzmann’s constant and T is the temperature. Finally, introducing Equation (7) into Equation (8), we can write the radius of the crystallites, such as:

Using the values of relaxation times from Figure 4, we obtain the following values for the radii:

An important factor which can explain qualitatively the obtained radii of crystallites formed inside this type of membranes is their geometrical microstructure. In this sense, small-angle neutron scattering (SANS) investigations have shown [13] that at concentrations higher than 5% the membranes are characterized by a hierarchical organization of crystallites in which ramified mesoscale mass fractals [14] crystallites with fractal dimension D=2.68 are composed of either mass or surfacelike, nano fractal crystallites of various fractal dimensions, whose values depend on the catalyst concentration. In the same work it has been shown that the transition from mass to surface fractal occurs between 10% and 20% volume concentration of the catalyst and at this point the small crystallites change their organization, from branched structures to compact structures with rough surfaces. In general, for hierarchically organized membranes [15,16], SANS can reveal a transition from one type of organization to another one (e.g., massto- mass, mass-to-surface or any combination of them), and depending on the type of the transition, various characteristics can be revealed. If the SANS scattering intensity shows a succession of two power-law regimes in which the absolute value of the first power-law regime is higher than that of the subsequent second power-law regime, and the crossover position (point in reciprocal space where the transition occurs) depends on the contrast variation, then we deal with a multiphase material [16]. Thus, applying a generalized Stuhrmann contrast variation [17] we can answer whether one phase ‘absorbs’ another one, or they are both immersed in the surrounding matrix. However, if the absolute value of the first power-law regime is lower than that of the subsequent second power-law regime, this is a signature of a two-phase fat fractal [18-20] and additional information can be obtained from corresponding SANS data, such as the scaling factor at each iteration or the number of particles composing the fractal [21,22].

Other physical or chemical properties of the obtained membranes, such as the absorption and dispersion characteristics, pore distribution and their average diameter [8], as well as gelation time [9] can be sensibly influenced by the volume concentration of the catalyst.

We have shown that the electrical capacitance C and dissipation factor D of the obtained capacitors based on silicone rubber, silicone oil, stearic acid and catalyst; change their values in the presence of an electric field of medium frequency, and the corresponding profile is sensibly influenced by the volume fraction É¸ of the catalyst. In addition, the relative dielectric permittivity E’ and dielectric loss factor E’’ depend also on the volume concentration É¸, for electric field frequencies in the range from 10 to 100 KHz.

Dielectric measurements show that the relaxation time of dielectric polarization for each membrane decreases with increasing the concentration É¸, while the crystallite size decreases with increasing É¸. We have developed a mathematical model in the framework of Debye theory which explains this behavior. The obtained results are in good agreement with the behavior of the radius of gyration of nanocrystalites, as revealed by small-angle neutron scattering measurements [13].

These properties can be used for various medical and technical applications, such as in phase separation using electrical methods, or for fabrication of devices in which dispersion and absorption of an electric field have to be predetermined.

Financial support from JINR-IFIN-HH projects awarded by the Romanian Plenipotentiary Representative at JINR is acknowledged.