Port Surgery for Colorectal Cancer Patients, Involving the Use of A Single- Incision Laparoscopic Surgery Port at the Planned Stoma Site

Copyright: © 2014 Hara M, et al. This is an open-access article distributed under the terms of the Creative Commons Attribution License, which permits unrestricted use, distribution, and reproduction in any medium, provided the original author and source are credited.

A single-incision laparoscopic surgery (SILS) port may be used to reduce the number of surgical incisions. Here, we describe our technique, equivalent in technical difficulty to conventional laparoscopy, of using a SILS port at a planned diverting-stoma site in colorectal cancer patients. This technique is indicated for patients for whom the intent is to perform tumor resection with diverting ileostomy. Because ileostomy is usually created on the right, this technique is most useful for left-sided lesions. However, an additional port in the umbilicus enables dissection of the right colon. The SILS port is placed by the open method, with additional trocars added once pneumoperitoneum is established. One trocar port is eventually used for a drain. We use this technique not only for intersphincteric resection, wherein distal rectal stump stapling is not necessary, but also in total coloproctectomy and ultralow anterior resection, which require deep pelvis stapling or right-sided colonic dissection.

Laparoscopic surgery has played a significant role over the past 2 decade, allowing patients to undergo surgery with minimal scarring. However, some scars still develop, and reduced port surgery has been introduced as a method of performing operations with fewer incisions and less scarring; this method has even been discussed in colorectal cancer surgery circles [1-3]. However, reducing the number of ports poses some dilemmas. Although reducing the number of ports might benefit the patient, most ports are necessary for surgeons to perform surgery easily. On the other hand, the frequent collision between the scope and the surgeon’s hands makes single-incision laparoscopic surgery (SILS) difficult.

To overcome this problem, we focused on placing trocars at the locations of unavoidable incisions such as drain holes and diverting-stoma sites. We have previously reported the use of a SILS port at the site of the diverting ileostomy in an intersphincteric resection (ISR) procedure [4]. ISR does not require a stapler for the distal rectal transaction line nor does it require dissection of the right colon. It is difficult to handle a stapler in the deep pelvis, even in conventional laparoscopic surgery. It is challenging to operate on the right colon from a SILS port on the right side of the abdomen without colliding with other instruments. To avoid collision, it is often necessary to place additional trocars. The placement of the SILS port on the right side will prevent these collisions as the trocar sites of the instrument can be shifted according to the surgical phases.

To extend the indications of the reduced port technique, we standardized the method of port insertion. We used a SILS port at the planned stoma site in total coloproctectomy and ultralow anterior resection with diverting ileostomy. We present these cases for review.

Preoperative stoma-site marking was performed. After administering general anesthesia, a 2 cm diameter skin resection was performed at the predetermined stoma site (Figure 1A and B). Once the underlying adipose tissue was resected, a cruciate incision was made in the rectus muscle fascia. The site was covered with a wound protector, and a SILS port (Covidien, Mansfield, MA, USA) was placed. Once pneumoperitoneum was established, another SILS port was placed transumbilically, enabling the surgeon to use 2 instruments with enough distance between them to improve access and reduce instrument crossing. The surgeon could also operate from either side of the patient. In total coloproctectomy, the procedure that we usually follow is to dissect the colon and rectum in a retrograde approach. In this case, the surgeon stood on the right side of the patient to start the dissection of the inferior mesenteric artery (IMA). For this maneuver, instruments were passed through the 5 mm trocars of the stoma-site SILS port, and the camera and the assistant’s forceps were passed through the umbilical SILS port. After ligating the IMA, the rectum was dissected using 3 forceps; one was inserted through each SILS port for the surgeon and one was inserted through the transumbilical port for the assistant. At this point in the procedure, the camera was moved to the stoma-site port. After the rectum was adequately dissected, the descending colon was dissected using a retrograde approach to the level of the distal transverse colon. The surgeon then moved to stand between the patient’s legs. The camera was inserted through the transumbilical port, similar to the procedure in conventional laparoscopy; the transumbilical port was the surgeon’s right-hand port and the stoma-site port was the left-hand port. With the assistant surgeon using a grasper from the stoma-site port, the surgeon performed ileocecal artery ligation and then ligated the root of the middle colonic artery. After dissecting the right colon, the rectal mucosa on the dentate line was dissected toward the already dissected mesorectum. The specimen was retrieved through the stoma-site port, and transaction was performed extracorporeally at the terminal ileum. A J-pouch was created extracorporeally by using a linear stapler (Figure 1C). This ileopouch was returned to the pelvis and a hand-sewn ileal pouch-anal anastomosis was created using the perineal maneuver. After inserting a drain through the umbilical port, this wound was closed. Finally, a diverting ileostomy was created at the other SILS-port site (Figure 1D).

No major complications occurred, and the patient was discharged after he learned to manage the stoma. Three months later, he underwent ileostomy repair without any complications (Figure 1E). No recurrence has been detected.

A patient who had undergone radiotherapy for prostate cancer consulted a gastroenterologist for hematochezia; colonoscopy revealed advanced lower rectal cancer. Computed tomography showed no evidence of distant metastases or lymph node involvement. Due to the previous pelvic radiation exposure, we decided to create a diverting ileostomy.

With the patient under general anesthesia in the lithotomy position, a SILS port was placed in the right abdomen at the preoperatively marked site (Figure 2). After developing pneumoperitoneum, a 10 mm and a 5 mm trocar were inserted through the umbilicus and the left upper abdomen, respectively. The mesentery surrounding the IMA was dissected to the level of the left colic artery and the superior rectal artery was clipped below the left colic bifurcation. During this part of the procedure, the surgeon used the SILS port and umbilical ports (Figure 3A). The left colon was then mobilized; in this patient’s case, the splenic flexure was not mobilized because of a redundant, long sigmoid colon. For colonic mobilization, the surgeon used both 5 mm trocars of the SILS port, the camera was placed through the umbilical 10 mm trocar, and the assistant surgeon used the 5 mm left abdominal trocar (Figure 3B). 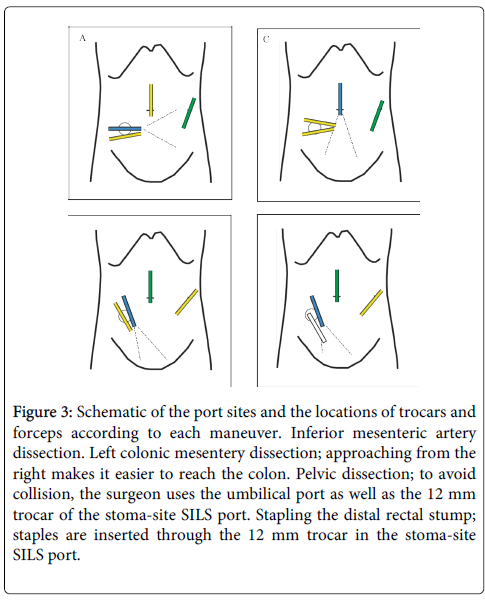 Figure 3: Schematic of the port sites and the locations of trocars and forceps according to each maneuver. Inferior mesenteric artery dissection. Left colonic mesentery dissection; approaching from the right makes it easier to reach the colon. Pelvic dissection; to avoid collision, the surgeon uses the umbilical port as well as the 12 mm trocar of the stoma-site SILS port. Stapling the distal rectal stump; staples are inserted through the 12 mm trocar in the stoma-site SILS port.

Dissection of the mesorectum was performed along the total mesorectal excision plane. The surgeon used a SILS-port 5 mm trocar and the left 10 mm trocar for his right and left hands, respectively (Figure 3C). The camera was inserted through the 10 mm SILS-port trocar. The assistant surgeon used the umbilical trocar to retract the rectum towards the cranial side. Although the irradiated tissues were edematous, the location of these trocars enabled us to dissect the rectum as easily as we could have with conventional laparoscopy. Finally, the distal rectum was transected at the level of the anococcygeal ligament by using the Echelon Flex Endopath stapler (Ethicon Endo-Surgery, Inc., Blue Ash, OH, USA), inserted through the 12 mm trocar of the right abdominal SILS port (Figure 3D). Although this transection was made deep in the pelvis, the trocar location made it easy to perform stapling without instrument collision. After performing anastomosis using a circular stapler, diverting ileostomy was created at the SILS site.

The patient was discharged after he had learned to manage the stoma. Three months later, he underwent ileostomy repair without any complications.

Reducing the number of surgical ports has become a frequent goal of surgeons since SILS was first developed [3,5-8]. Ideally,this reduction results in ports being placed through other necessary incisions such as drain holes, specimen-retrieval incisions, and diverting stoma sites [9]. Port reduction can, however, increase the technical difficulty of a given surgery [10,11]. SILS, the ultimate port-reducing surgery, introduces technical difficulties such as instrument collisions and awkward approach angles to target organs. In particular, in narrow and far spaces such as the deep pelvis, it is difficult to precisely maneuver during SILS. Precise maneuvering will be necessary to maintain the total mesorectal excision (TME) plane during rectal dissection or while dissecting the anal sphincter muscle during ISR. To avoid collisions, 2 distant ports are necessary; the surgery is then no longer a single-incision procedure. We could combine these concepts for patients who required a diverting ileostomy. The scope and the surgeon’s ports should be located on an isosceles triangle. It is not the formation of an isosceles triangle, but the concept of ensuring the formation of a triangle that enables us to locate these ports. This decreases instrumental collision compared to that during single port surgery. Furthermore, the scope port can be shifted between the trocar and the SILS port. According to surgical phase, we can change the position of scope port to avoid collisions with the scope.

We have already reported 1 case of use of the SILS port at the diverting ileostomy site in a patient who underwent ISR for very low rectal cancer [4]; this surgery is limited to the left colon and does not require the use of a linear stapler for transection. We concluded that this particular technique is limited to surgeries involving the left colon and rectum because a right-sided SILS port is not suitable for right colonic maneuvers. In the meantime, many studies demonstrated that right hemicolectomy may be performed using a SILS port in the midline, particularly if it is placed through the umbilicus. We used this information to expand the stoma-site SILS technique to total coloproctectomy and ultralow anterior resection, which require right colon dissection and deep pelvic linear stapler transection. With the use of 1 additional port, the surgeon can exchange port sites according to the maneuver being performed. Standardization of trocar sites according to these maneuvers will make it easier to operate, even in the right colon or the deep pelvis.

SILS has become a widespread procedure; however, it is still technically difficult. Using an umbilical port and placing the SILS port on an unavoidable incision will make surgery almost as easy as conventional laparoscopy. In addition, placing a SILS port on a planned stoma site will make it possible to avoid an unnecessary scar.

We present an option for reducing the number of surgical ports by using the diverting-stoma site as a SILS-port site. Additional ports make it possible for the surgeon to exchange port sites and instruments as necessary, avoiding instrument collision.