Copyright: © 2017 Dagdeviren H, et al. This is an open-access article distributed under the terms of the Creative Commons Attribution License, which permits unrestricted use, distribution and reproduction in any medium, provided the original author and source are credited.

Vaginal wall cysts occur rarely and can cause a variety of symptoms. A 35-year-old woman presented with history of mass bulging from vagina for a-year. Pelvic examination revealed a reducible non-tender mass protruding from the vagina and diagnosed as rectocele. Physical examination is important for the detection and characterization of vaginal cysts but may be inadequate for appropriate diagnosis.

A 35 year old multiparous woman was admitted to our gynaecology clinic with a complaint of reducible non-tender mass protruding from the vagina noted for about one year. The mass bulged from her vagina intermittently, especially during coughing, squatting or having bowel movements. Also she had discomfort during defecation. On her pelvic examination, a bulging mass protruded from posterior vaginal wall (Figure 1). The mass was soft and could be compressed manually easily. The mass appeared to be a rectocele and a colpography posterior operation was planned. Informed consent included permission for documentation of the case was taken from the patient before the operation. After dissection of the posterior vaginal wall there was a 5 cm diameter cyst lying deep of the posterior vaginal wall. 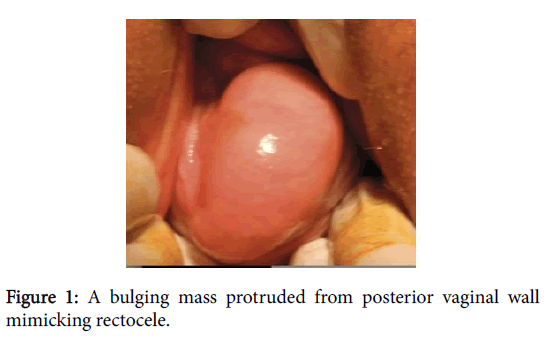 Cyst was dissected completely from the rectum and posterior vaginal wall. The final pathologic report was a cyst derived from müllerian epithelium arise from patches of vaginal adenosis and are lined by tuboendometrial- or mucinous-type epithelia and metaplastic squamous epithelium (Figure 2). Her follow-up and long-term recovery period was uneventful. Mullerian duct cysts are remnants of the embryological paramesonephric ducts [2]. Usually they are single and they have been reported to be located typically anterolateral vaginal wall [3,4]. Controversely in our case cyst was located at the posterior vaginal wall. Most of them are asymptomatic but, rarely an abscess can develop in a Mullerian cyst presenting with chronic pelvic pain and deep dyspareunia [5]. Also, adenocarcinoma arising from a vaginal Mullerian cyst had been reported previously [3].

Vaginal wall cysts are usually discovered incidentally on physical examination. In some patients cysts may cause as mild discomfort, feeling of vaginal pressure and fullness. Also, posterior cysts may cause constipation and painful defecation. Our case was presented with complaints of a mass protruding through the vagina for a year which was increasing in size but there were no associated urinary or bowel symptoms.

In most cases, the appropriate diagnosis can be made on history and examination. Prolapse of pelvic organs such as a cystocele or rectocele, can mimic a vaginal cyst, so they should be ruled out in differential diagnosis [5,6]. As in our case, the mass protruding from the vagina appeared to be a rectocele, first. Magnetic resonance imaging may be useful in differential diagnosis of vaginal masses and ruling out vaginal prolapse [4,7]. Techniques such as reducing the prolapse while the patient performs the Valsalva manoeuvre, changing her position may be useful to rule out prolapse [5].