Postural Stability after Hippotherapy in an Adolescent with Cerebral Palsy

1Centre for Education and Rehabilitation for Children and Adolescents with Special Needs, Kamnik, Slovenia

Copyright: © 2011 Zadnikar M, et al. This is an open-access article distributed under the terms of the Creative Commons Attribution License, which permits unrestricted use, distribution, and reproduction in any medium, provided the original author and source are credited.

Objectives:To investigate whether hippotherapy has short- and long-term effects on postural control in an adolescent with cerebral palsy (CP).

Design: Pre-and post-treatment follow-up with 5-week intervention. Quantitative stabilometry and a modified sensory organization test were performed to determine the subject’s response after hippotherapy (HT). The total path length and the lengths of the mediolateral and anteroposterior centre of pressure (COP) movements were calculated.

Settings: Measurement system from the Health Faculty research laboratory in centre for HT.

Conclusion: In our case study the modified sensory organization test on the force plate was sufficiently sensitive to detect fluctuation changes in the COP; therefore it is appropriate for continued use. Similarly, HT was found to have a positive effect on postural control.

The term “cerebral palsy” is used when the cerebral insult has occurred before birth, around the time of birth or up to the age of about 3 years, while the brain is still undergoing rapid development [1,2]. Disorders of movement and posture are caused by damage to the motor cortex. In addition to postural and motor abnormalities, which are always present, people with CP may exhibit learning disabilities, other cognitive and sensory impairments, hearing and visual loss, speech and language disorders, emotional problems, orthopaedic complications and epilepsy [3-6]. The consequences of chronic muscle imbalance and the resultant deformities can cause increasing disability with age [7,8]. One of the most significant problems in children with CP is defective postural control.

Posture involves orientation of the body in space so that muscles work efficiently against gravity. Postural control is dependent on proper functioning of righting, equilibrium and protective reactions, which are controlled by the central nervous system [9,10]. A certain degree of postural control is essential for controlled and coordinated movement of the extremities, head and trunk control, functional trunk mobility, maintaining symmetry, displaying the ability to weight shift and bear weight in all directions, and coordinated and voluntary limb movements [11-13]. Individuals with central nervous system damage may show signs of disrupted postural mechanisms [10,13] “Postural control is organized at two functional levels. The first level consists of a direction-specific adjustment when the equilibrium of the body is endangered, or the generation of direction-specific patterns of postural adjustment, while the second level fine-tunes the basic, direction-specific adjustment with input from the somatosensory, visual, and vestibular systems” [9]. Hippotherapy, in which equine movement is used for its therapeutic effect, is one of the approaches for improving postural control [15].

HT is defined as the therapeutic use of a horse as part of an integrated treatment strategy for children and adults with movement dysfunction [16-18]. The primary goal of HT is to improve the individual’s balance, posture, function, and mobility. The horse’s gait provides a precise, smooth, rhythmic, and repetitive threedimensional pattern of movement to the rider [19-23]. In general, the movement of the horse provides a variety of inputs to the rider, which may be used to facilitate improved contraction, weight shift, and postural equilibrium and balance responses, and improve strength, coordination, muscle tone, joint range of movements, weight bearing, gait, and sensory processing [19,24-26].

Stabilometry is one of the most commonly used methods for measuring the parameters of postural steadiness. It determines the movement of the body’s COP within the support base during upright stance [27].

The dual purpose of our study was to:

1. Verify the suitability and feasibility of the modified test of sensory organization

2. Establish the short and long-term effects of HT in a person with cerebral palsy on the stability of posture, which are inferred from parameters of movement of the centre of pressure.

The subject of the case study was an 18-year-old male with a diagnosis of cerebral palsy and epilepsy. The subject suffered from spastic diplegia, with greater impairment on the left side. The asymmetry of muscle tone and increased muscle tone on the left side of the body resulted in mild asymmetry of the ribcage, an asymmetrical position of the pelvis and adduction and internal rotation of the left lower limb with knee flexion and inversion of the left foot. Asymmetry of muscle tone causes asymmetry of the whole body and perception of the body in space, which is reflected in the change in control of body posture in the standing position, with the asymmetry being even more pronounced when walking. The degree of functional motor ability, expressed by the GMFM test (Gross motor function measure), was 79% before hippotherapy.

Intervention: The adult participated in a 30 – minute hippotherapy intervention 3 times a week for 5 weeks HT intervention. HT was individualized according to the adult’s needs and administered by one physiotherapist with support from riding instructors. During a 30-minute session the therapist encouraged a symmetrical body position, additional pelvic movement, especially to the left and right, and stimulated lateral trunk flexion and rotation between the pelvis and the shoulder girdle.

Measurements on the force platform, on which movement of the COP was measured, were performed before the commencement of HT, immediately after the first HT session and after the five-week period. Besides stabilometry, a modified sensory organization test [12], which comprised six measurements in quiet standing on the force platform, was performed before hippotherapy. Immediately following HT the same six measurements were repeated. The first two movements comprised standing on a firm base with the feet 17cm apart, with eyes open and closed. For the next two measurements the subject had his feet together with eyes open and closed. In the third two measurements the subject stood on a soft base with his feet 17 cm apart with eyes open and closed (Figure 1). The demand for postural control was increased by standing with feet together, thus decreasing the support base, and by closing his eyes. 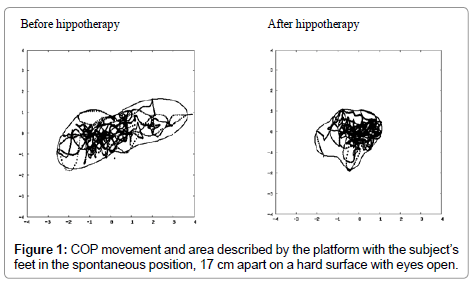 Figure 1: COP movement and area described by the platform with the subject’s feet in the spontaneous position, 17 cm apart on a hard surface with eyes open.

Data analysis: Stabilometry was used to assess the amount of postural sway. Data were collected at a 50 Hz sampling rate for 60 seconds using a portable force platform (Kistler 9286 AA, Wintherthur, Switzerland). The raw data were stored on the disk of a PC-type computer using Kistler’s BioWare programme. For the analysis they were later uploaded to a server running under the Linux (Fedora 12) operating system. Data analysis was performed using webbased software that had been specially developed for our stabilometric measurements [27].

Analysis of the stabilometric data was begun by smoothing the acquired COP positions in the mediolateral and anteroposterior directions using moving averages over 10 adjacent points. From the resulting data standard statistical parameters of standard deviation and the averages of the absolute values of COP displacements and velocities, total path length and the lengths of the mediolateral and anteroposterior COP movements and the frequency distributions of the positions and velocities were calculated. Finally, we determined the outline of the measured data and calculated its Fourier coefficients, area and other related parameters.

The 18-year-old adolescent, despite impaired movement due to CP, was able to stand on the force platform for 60 seconds with feet together or apart with eyes open and closed. On the soft base, before the first hippotherapy session, he stood with feet apart and eyes open for 60 seconds and in the same position with eyes closed for only 25 seconds, while after 5 weeks’ therapy he also stood for 60 seconds under the same conditions (Table 1).

Table 1: Results of the modified sensory organization test before HT and after 5 weeks’ HT; data on the paths, areaandIVI. Data are classified according to when hippotherapy was performed. The presented case study provided information on the suitability of the proposed measurement protocol for the assessment of the effects of hippotherapy on the stability of posture or improvement in balance in people with sensorimotor disturbances. We established that it is possible to carry out the proposed modified sensory organization test in its entirety before and after hippotherapy in a person with the spastic form of CP. The subject was able to maintain the position for the 60 seconds required to obtain the data under all measurement conditions, in the spontaneous feet position, with feet together, with eyes open and closed and on a soft base. Sixty seconds represents the period for obtaining data that provides greater reliability and reproducibility of obtained stabilometric data [28]. We found that the parameters of COP movement after hippotherapy decreased when the subject had his eyes open, as did parameters for the total path length of the COP and individual components, that is anteroposterior and mediolateral components of the path length and the area described by the COP. They increased if the subject closed his eyes, and further increased if he stood on a soft base. The increase in postural sway is characteristic of the fluctuation in sensory input and conflicting information, resulting in a significant increase in the stabilogram area [27,28]. Since the path length of the COP and average speed are correlated, the results of our study can be compared with those of Kuczynski and Slonka [29], who reported a decrease in average speed and extent of sway in the anteroposterior and mediolateral direction and their standard deviations, which means decreased variability between attempts or a smaller number of larger excursions towards the edge of the force platform. Similarly, speed of movement decreased. There was no change in movement frequency in children with CP after 3 months’ therapy that consisted of riding on the Brunel active balance saddle twice weekly for 20 minutes. The difference between people with CP and a comparable group of healthy children was statistically significant in this study.

Knowledge of equine-assisted therapies, especially hippotherapy, and their efficacy is continually increasing and becoming more reliable and precise [30]. Most studies focus on researching the effects on the Gross Motor Function Measure (GMFM), muscle tone, temperospatial parameters of walking and energy use during walking. One of the rare studies to use stabilometry as a measurement tool is the above-mentioned study of Kuczynski et al. [29]. In addition, in metaanalyses with systematic reviews a detailed analysis of studies that influence the effect of HT on postural control and balance has been performed [31]. These results show that hippotherapy, which transmit stimuli across the pelvis and thus elicit the righting and equilibrium reactions are effective improving postural control in people with CP.

With this case study we verified the feasibility and suitability of the modified test of sensory organization and stabilometry and the short-term effects before and after hippotherapy in a person with CP. We established that the modified sensory organization test on the force platform is sufficiently sensitive to detect changes in oscillation of the COP on the force platform. A longitudinal study is planned to analyse the long-term effects of hippotherapy. This will enable us to answer the question as to how hippotherapy influences postural control in a larger sample of adolescents with CP. Analysis of obtained data showed that the protocol is suitable for obtaining answers to the hypothesis posed prior to the case study.

We thank Dianne Jones for language review and the physiotherapists at CIRIUS Kamnik for assistance with hippotherapy intervention. The second author was supported by the Slovenian Research Agency.Rehabilitation Research Center of Tehran University of Medical Sciences for providing the place and necessary equipments for data collection.