Copyright: © 2017 Walana W, et al. This is an open-access article distributed under the terms of the Creative Commons Attribution License, which permits unrestricted use, distribution and reproduction in any medium, provided the original author and source are credited.

Introduction: Spontaneous vaginal delivery is the commonest mode of delivery globally, particularly in remote areas of resource constrained countries where modern healthcare is limited. This study sought to establish among antennal and post natal attendees, women’s preferences regarding modes of delivery and the factors influencing their choices of delivery. Methods: This cross sectional hospital based study was conducted at the antenatal and post-natal care units of the obstetrics and gynaecology department of the Tamale Teaching Hospital. Data on respondents’ demographic characteristics, their preferred mode of birth delivery, and the reasons influencing their choice of delivery modes were collected via a structured closed and opened ended questionnaire. Results: A total of 499 women were interviewed. Majority (86.6%), of the respondents were within the ages of 18 to 34 years with modal age of 30 years and a mean age of 27.9 ± 5.6 years. In all, 85.0% (424) and 12.0% (60) preferred spontaneous vaginal delivery (SVD) and SVD with epidural anaesthesia respectively, while 3.0% (15) preferred delivery by elective caesarean section (CS). Majority (97.2%) of the respondents took self-decisions on their preferred mode of delivery. However, those who were influenced by healthcare workers were 1%, while 0.4% was influenced by their husbands and other family members respectively. Conclusion: In conclusion, the study revealed that the respondents most preferred choice of mode of delivery was SVD, followed by SVD with epidural anaesthesia, with caesarean section being the least preferred. The respondents’ have relatively low external influence regarding their preferred choice of delivery.

Among the birth delivery methods available, spontaneous vaginal delivery (SDV) is the most common. It is the process through which child birth naturally occur through the birth canal. Conditions that may prevent natural delivery or make it difficult include cephalopelvic disproportion, foetal distress, abnormal presentations and other medical conditions. Usually, the presence of such conditions requires the use of other procedures such as caesarean section, vacuum extraction and forceps delivery [1]. Generally, spontaneous vaginal delivery is the main form of delivery, but when it is not prudent, caesarean is carried out.

An estimated 18.5 million caesarean sections are carried out annually in the world, and in 3.6% the procedure is performed without any medical or surgical indications [6,7]. It has been established that serious complications or even deaths were more likely to occur following caesarean sections compared to spontaneous vaginal deliveries [8]. The World Health Organization (WHO) recommends caesarean delivery rates should not exceed 10-15% [9]. However, in the year 2008 alone, about 6.2 million avoidable caesarean deliveries were performed, and the corresponding economic cost associated with such operations is estimated at 2.3 billion American Dollars [6].

The use of caesarean delivery and SVD with epidural anaesthesia are limited in the African health facilities, probably due to resource constrains, cultural values, fear of suffering and wrong perceptions of womanhood. In Ghana, spontaneous vaginal delivery is common as in most developing countries, but there exist paucity of information on the perception of women on the various modes of delivery and factors influencing such perception. Thus this study establishes the birth delivery preferences and the associated factors influencing choices of modes of delivery among antenatal and postnatal attendees in the Tamale Teaching hospital.

This cross sectional hospital based study was conducted at the antenatal and post-natal care units of the obstetrics and gynaecology department of the Tamale Teaching Hospital (TTH). The TTH is located in the Eastern part of the Tamale Metropolis. The hospital was commissioned as a Regional Referral Hospital in 1974 and gained accreditation as a teaching hospital in 2007, with a client base of about two million people. The TTH serves as a referral centre for the Northern, Upper East and West Regions, the Northern parts of the Brong Ahafo Region and Neighbouring countries like Togo, Burkina Faso and La Cote D'ivoire. The hospital has a bed capacity of over one thousand and it serves as a clinical teaching institution for all health training institutions in the Northern Region. The obstetrics and gynaecology department is one of the several departments in the hospital, with the overall responsibility of providing antenatal, postnatal, gynaecological and family planning service. In addition, the department handles medical and nursing students in obstetrics and gynaecology. The study was conducted between April and May, 2015. The study population comprised of all expectant mothers and mothers attending antenatal and postnatal clinics respectively during the period of the study.

A total of 499 women were randomly sampled for the study. The antenatal and postnatal clinics together attend to an average of 2000 clients in a month. About 8 to 12 people were interviewed in a day for a period of two months. The days for data collection excluded weekends. Data was collected using carefully designed, pre-tested and validated closed and opened ended questionnaire. The questionnaire captured data on respondents’ demography, socioeconomic factors, birth delivery preference and factors influencing choice of birth delivery modes. The study protocol was explained to all participants in a language they understood, and those who accepted to be interviewed were included in the study.

The data was entered into MS Excel version 2010 for Windows. Data was cleaned for data entry errors and exported to Statistical Package for the Social Sciences (SPSS) version 16.0 for Windows for data analysis. Skewness test was performed to check for the distribution of the data. Further, the data was analysed using descriptive statistics of frequencies and cross tabulations to compare the statistical proportions.

The study was approved by the Research Department of the TTH. Permission was also sought from participants after explaining the purpose and relevance of the study to them. The consent of the respondents was sought prior to questionnaire administration, and only those who gave written consent were included in the study. The data was anonymously collected and kept confidential such that no portion of the data could be traced to any of the respondents.

Socio-demographic characteristics of the study participants 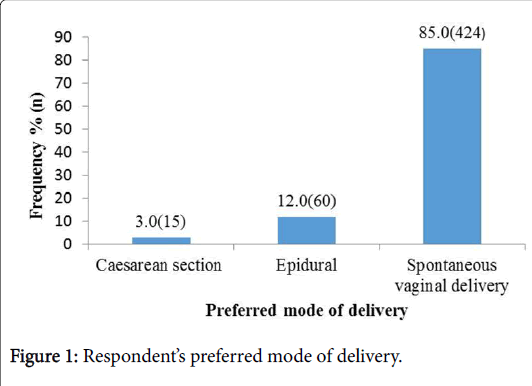 Respondents' reasons for their preferred choice of mode of delivery

Among the reason given by respondents who preferred caesarean section (CS) were; medical advice, less stress during labour and fear of labour pain (Table 2). All the participants who would prefer SVD with epidural anaesthesia said they will opt for it because the delivery process is painless, whereas those who would prefer SVD gave multiple reasons including; it is natural, safe, easy, simple and offers quick postdelivery recovery (Table 2).

This study revealed that 85.5% of the respondents had preference for SVD compared to the other modes of delivery, suggesting approximately 9 out of every ten mothers interviewed preferred SVD. This observation agrees with studies conducted in similar settings [10-12]. The proportion of preference for SVD was higher than that of a similar study conducted in the southern part of Ghana where 55.2% of mothers preferred SVD [13] and in Chile where 77.8% of women preferred SVD [14]. Among the reasons given for their inclination towards SVD in the current study include quick post-delivery recovery, natural and safe, easy and simple. In part, the current study commensurate with previous reports where SVD was viewed as normal, healthy and a natural sign indicating a successful passage from womanhood to motherhood [15-17].

Respondents’ aversion for CS was very high. Only three percent (3.0%) of the participants would prefer to be delivered by CS. In most Sub-Sahara Africa countries, the CS rate is relatively low, ranging from 1 to 2 percent [20,21]. Comparatively, the CS ate are higher in many European and American countries [22]. Previous reports have shown that even in countries where CS delivery is above the WHO recommended range of 10 to 15 percent, the preference for CS remains relatively low [23,24]. According to studies in Pakistan and Iran, women with higher income status are more likely to accept CS than women with lower income [25,26]. However, in the current study, both the women with formal education as well as those without formal educations had relatively strong dislike for CS.

The current study established that 13.3% (8/60) of mothers who previously had CS delivery preferred SVD, a finding which agrees with that of Torloni et al., who reported that only 14.7% out of 36% of their participants who had CS delivery preferred same mode of delivery [27]. Respondents who preferred delivery by CS thought it frees them from both the pain and stress associated with labour. This is consistent with a study by Sercekus and Okumus, who stated labour pain as the most common source of childbirth related fear [28]. Therefore, more mothers who opted CS delivery because of fear for labour pain are likely to accept SVD with epidural anaesthesia provided the service is available and accessible.

Past modes of delivery had some influence on the respondents preferred mode. In this study, 84.6% (209/247) of the respondents who had SVD in their previous delivery preferred SVD in their next delivery, 0.4% (1/247) would prefer CS and 15% (37/247) would like SVD with epidural anaesthesia, while only 13.3% (8/60) delivered previously by CS will prefer same. In a related study conducted by Yilmaz et al., in Turkey, 90% of women given their previous birth through SVD preferred same mode in their next delivery, whereas 36% of those given their last birth by CS liked same [29]. In contrast, Pang et al., reported in their study that 23.8% of 259 women with SVD were found to prefer CS after their first delivery, while 5 out of 25 women with elective CS changed their mind to prefer SVD [30]. The present study also observed that none of the participants with parity ≥ 3 and ≥ 5 would prefer delivery by CS and SVD with epidural anaesthesia respectively. However, all mothers with parity ≥ 5 liked SVD. It is worth noting that neither age, parity nor educational level have significant influence on participants’ choice of delivery, an observation which concurs the findings of Yilmaz et al. [29].

Sources of influence generally emanated from family members, husband, and healthcare workers. However, majority 490 (98.2%) of the mothers took self-decision on their preferred mode of delivery. The study revealed that no husband or family member influenced any of the participants to take up delivery by CS or SVD with epidural anaesthesia, except the latter where two of the mothers claimed they were influenced by a healthcare worker. This revelation possibly presents the seemingly societal aversion for CS delivery.

The current study observed that 85.0%, 12.0% and 3.0%, of women attending antenatal and postnatal clinics at TTH prefer SVD, SVD with epidural anaesthesia and CS delivery respectively. Majority of respondents preferred SVD because they believe it is safe, natural and offers quick postpartum recovery while those who opted for caesarean section did so because they want to avoid the pain and stress associated with labour. Participants who preferred SVD with epidural anaesthesia accept the procedure because it makes the labour process painless. Based on the findings of the study, it is recommend that expectant mothers, and couples be educated on the delivery options available and their accessibility, more especially on labour with epidural anaesthesia. This will help clients to take informed decisions on their preferred mode of child delivery.

We are grateful to the management and staff of the Tamale Teaching Hospital for permitting us to undertake the study in the facility. We are also thankful to all participants who volunteered to be part of the study.