Copyright: © 2017 Wen TS, et al. This is an open-access article distributed under the terms of the Creative Commons Attribution License, which permits unrestricted use, distribution, and reproduction in any medium, provided the original author and source are credited.

Preterm birth (<37weeks gestation) occurs in approximately 12% of births in the United States and results in 26,000 infant deaths leading to our unenviable rank of 55th in the world for infant mortality [1,2]. Preterm birth is also extremely expensive with an economic cost (2007) of $26.2 billion accounting for approximately 50% of all pregnancy costs [3]. The diagnosis of preterm labor is controversial. Thus acute tocolytic management of uterine contractions once labor has started is difficult and, even if successful, such treatment is not continued long-term [4]. Complicating matters further is that many variables, such as race, age, socioeconomic standing, bleeding, genetics, etc., are not modifiable risk factors. All this has left obstetricians, as well as obstetric nurses/nurse mid-wives, in a difficult position in their attempt to reduce preterm births. However, we have one thing that has been shown to decrease early delivery 17- Hydroxyprogesterone Caproate (17P). The use of 17P (250 mg injected weekly) in women with a singleton pregnancy who have had a prior spontaneous early delivery, revealed a diminution in preterm births in every study (Figure 1) [5]. All of these reports showed a reduction in preterm births (<37 weeks gestation) averaging 22%. Two of the studies also reported a reduction in deliveries below 32 weeks gestation while four of the investigations noted a significant reduction in the neonatal deaths by 42%. Likewise for the studies which reported birthweights among treated patients, they noted neonates were 214-512 g heavier than control off-spring. Progesterone appears to have its salutary effects by several mechanisms. First, progesterone decreases the number of myometrial oxytocin receptors and increases gap junctions. The drug also counteracts prostaglandin production by the amniochorion while enhancing the structural integrities of the cervix [6].

While the idea dose of progesterone is unknown, the lowest percentage of preterm births were seen when the median severe concentration exceeded 6.4 ng/ml [7]. Finally genetic variations also may effect responsiveness to progesterone as noted by Manuck et al. [8].

However, there are certain situations where progesterone treatment is not useful. Schuit et al. [9] showed that the administration of 17P in patient with twins was not helpful in reducing neonatal mortality or morbidity. Briery et al. [10] demonstrated that weekly 17P was not of assistance in prolonging pregnancy or decreasing neonatal morbidity in research subjects who had preterm premature rupture of membranes. In contrast, vaginal progesterone used in patients with a short cervix has demonstrated a reduction in preterm births as well as composite neonatal morbidity [11]. Also, it appears that 17P injections may be helpful in prolonging pregnancy in women who have arrested preterm labor and then are treated with weekly injections after discharge [12]. What we discuss in this commentary is the use of weekly 17P injection in women with a singleton gestation who have had a prior spontaneous preterm birth. 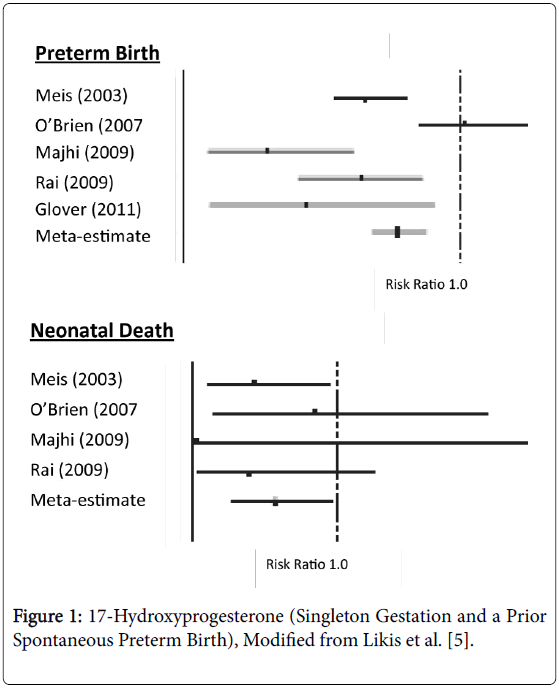 A recent study by Iams et al. [13] revealed that in clinics of 20 large hospitals in Ohio, over 2500 women eligible for 17P were tracked for almost two years and there was a 13% reduction in births before 32 weeks, which is exactly the group where most of the neonatal morbidity and mortality would occur. The foundation of this successful program emphasizes early access to prenatal care, consistent counselling regarding early recognition of preterm labor, adopting a cervical length sonography screening program as well as expediting weekly progesterone supplementation and customizing the start of such treatment in each case. Although 17P is almost universally available for socioeconomically disadvantaged patients, as well as patients with commercial insurance, many appropriate candidates do not receive 17P therapy for a variety of reasons. For example, Orsulak et al. [14] found in Louisiana that while 9.9% of pregnant women covered by Medicaid in that state were eligible (prior spontaneous preterm birth) only 7.4% of that group received weekly 17P. In addition, only half of them received ≥ 10 weekly injections of 17P. Similarly, Stringer et al. [15] noted that in two large hospitals in North Carolina over a two-year period, 627 women had a history of a prior spontaneous preterm birth but only 296 were treated (47%) and many of those only received one or two doses of 17P. In Mississippi, despite universal availability of 17P, patients receiving weekly injections is estimated to be around 15% [16].

There are a myriad of reasons why patients requiring 17P to prevent preterm births are not effectively treated. Recently, Turitz et al. [17] studied this question in 243 women who were candidates for 17P injections. They noted the women (74.7%) attending their preterm birth clinic, staffed by nurse practitioners, nurse midwives, and obstetricians, who received the drug were more likely have a history of a second trimester loss, a short cervical length, or a recent preterm birth. Those women with a prior full-term birth (particularly if it followed their early delivery) were less likely to accept 17P treatment. In this study, race, obesity and insurance status did not impact 17P usage. Nurse and physician providers who counseled patients on each prenatal visit about the importance of preterm birth and universal access to 17P were the most consistent predictors of appropriate treatment for eligible women.

Another issue that thwarted the 17P initiative was the type of 17P used. Initially 17P was compounded by local pharmacies. Once the FDA approved Makena® (2011, manufactured by KV Pharmaceuticals and marketed by Ther-Rx) the issue was the high cost ($1500 per dose) [18]. This predatory pricing eventually resulted in bankruptcy for these companies. More recently, Makena™ has been marketed by AMAG Pharmaceutical company. Commercial insurance payors as well as Medicaid plans, have accepted this AMAG structure as cost effective. Compounded 17P products, while less expensive, have significant safety issues. (Table 1) as noted after the several deaths after epidural steroid injections [19]. Accordingly, the FDA Advisory Committee has recommended that “The FDA product, Makena®, should be used instead of a compounded drug except when there is a specific medical need (e.g. allergy) that cannot be met by the approved drug” [20]. In summary, the issue of cost effectiveness and reliability of the type of 17P to be used for such patients have become a moot point.

There are other challenges. Many Medicaid patients who need 17P, register late for prenatal care. Although 17P used in women with prior preterm birth is recommended to start treatment between 16–20 weeks; earlier than some women begin prenatal care. However, there are several studies supporting the initiation of such treatment in appropriate patients as late as 28 weeks [21,22]. In these studies, women so treated had a reduction in births <35 weeks in 26.4% compared to 41.7% in the control group as long as treatment was initiated by 28 weeks’ gestation [22]. Also, the AMAG Pharmaceutical Company has a “quick start program” which, in women who must qualify for Medicaid (which can take 4-6 weeks), covers the injections until Medicaid approval. There is also has a robust patient assistance program that covers Makena® injections for those unable to obtain it any other way. A case management program that provides a higher level of patient compliance in health care areas lacking discreet preterm birth prevention programs is key. Lucas et al. [23] revealed in Centene’s managed program developed for women at risk for preterm delivery (which involved patient education, weekly home visits and 24-7 telephone nurse access) that almost 60% of 790 patients initiated 17P early in prenatal care (16-20 weeks). Of the 10,583 injections administered 97.5% were given within the recommended injection intervals of 6 to 10 days. Most recently Rittenberg [24] have expanded their experience comparing patients without case management (2004-2006, n=1979) and women in a case management system (2007-2010, n=10,695). There were fewer spontaneous preterm births (p-0.001) and the elective discontinuation rate between 34-36 weeks was significantly decreased (26.9% vs. 16%, p=0.001) [24]. Finally, since child care and transportation among other issues are challenges for weekly injections in the medical clinic, a home administration program would be helpful. These initiatives will require the involvement of nurse providers of every type. Accordingly, nurse participation in several studies has shown better results compared to treatment in physician offices or even in university specialty clinics. For example, Gonzalez-Quintero et al. [25] found that there was an earlier registration, increased compliance with injections, more injections administered and less early termination of weekly treatments (before 34 weeks) when injections were given by the home nurse. A comparison of results underscored fewer preterm birth, greater gestational age at delivery and less neonatal morbidity in those who had home injections compared to the control group [26].

In addition to the pharmaceutical industry’s contributions, medical providers can offer specific education programs to enhance patient participation. An alignment of physician’s offices with best practice guidelines and common protocols could be helpful in assisting consistent nursing practice in the administration of 17P. Likewise, telemedicine can offer expert consultation as well as sonographic interpretation. Education of physicians, nurse practitioners and nurse midwives through programs on a state or regional basis could establish the validity of the management protocols regarding 17P, as well as other strategies for preterm birth prevention. A campaign to highlight the advantages of 17P by presenting at local, state and regional meetings, as well as national meetings for nurses and physicians could be helpful. Finally, we need to consider other novel solutions. One such effort which Orsulak et al. [14] begin in Louisiana is a pay-forperformance strategy where managed care organizations do not receive their full payment for delivery unless 17P is administered to appropriate women. A national initiative has been proposed by the Society of Maternal Fetal Medicine where national organizations such as the American College of Obstetrics and Gynecology might partner with the Centers for Medicare and Medicaid Services (CMS) to support similar same pay-for-performance strategies for 17P. Also, professional liability may play a role as malpractice suits against physicians, nurses and hospitals, related to the failure to administer 17P when a preterm birth does occur, are becoming more common. Medial liability insurers in many areas are providing education for their members and in some cases, reducing premiums for compliance.

It is critical for all of us (physicians, nurses, nurse mid-wives educators and payors) to be consistent in prenatal care ensuring that women with a singleton pregnancy who have had a prior spontaneous preterm birth receive weekly 17P injections at the earliest possible times (preferably 16–20 weeks) continue them up to 36 weeks. For over 50 years we have looked for something that will help decrease the incidence of preterm births (particularly those <32 weeks) and now we have found such a tool in 17P. Our challenge is to make certain all appropriate women receive this treatment as they deserve nothing less than the best care we have to offer.