Strode Matthew A*, Scott Joshua A, Mangieri Christopher W and Amin Asna A

Copyright: © 2015 Matthew, et al. This is an open-access article distributed under the terms of the Creative Commons Attribution License, which permits unrestricted use, distribution, and reproduction in any medium, provided the original author and source are credited.

We present a 71 year-old female who initially presented with iron deficiency anemia requiring transfusion of blood products. During the course of the work-up, an area of mucosal necrosis was found and biopsied in the ascending colon. The final pathology was consistent with poorly differentiated squamous cell carcinoma (SCC). After extensive evaluation of the patient, it was determined that the colon was the primary source of the malignancy. In our report, we discuss and review the current management of primary SCC of the colon.

Colorectal cancer (CRC) presents in the form of adenocarcinoma in more than 90% of cases while the majority of the remaining 10% originate from non-epithelial derived cell lines. Although not commonly found in the literature, a small subset of tumor histology can be linked to colon primary squamous cell (SCC) origin with an incidence between 0.25-0.1 per 100,000 colorectal cancers. Other glandular organs such as the uterus, pancreas and lung have a propensity to develop these types of malignancies while squamous cell or mixed adenosquamous carcinoma (Ad-SCC) of the colon is very rare [1]. We present an isolated case of primary SCC with a mixed adenosquamous component of the ascending colon.

A 71 year old female presented with a poorly differentiated ascending colon malignancy of unspecified histology discovered on lower endoscopy at our institution (Figure 1). Although the patient had a history of adenomatous polyps extending back to 2006, this particular diagnostic colonoscopy was performed as part of a chronic anemia workup. In 2006, a tubulovillous adenoma with high grade dysplasia was completely excised from the rectum during a screening exam. At follow-up, 5 months later, a small tubular adenoma was discovered in the transverse colon followed by exams at 1 and 3 years which only a tubular adenoma and a hyperplastic polyp were removed during each exam. Her past medical history was significant for coronary artery disease status post percutaneous coronary intervention with a drug-eluding stent in 2011, hypertension, type 2 diabetes mellitus, osteoporosis, and restless legs syndrome. Her past surgical history consisted of a total abdominal hysterectomy for fibroids in 1984, right modified radical mastectomy in 2005 for T1cN1M0 estrogen/progesterone receptor positive breast cancer, and bladder sling surgery. She smoked cigarettes for 20 years but had quit 20 years prior and denied alcohol abuse or family history of colon cancer. Her physical exam was unremarkable and laboratory exam was significant for hemoglobin of 8.2 mg/dl and a serum carcinoembyronic antigen level of 3.6 ng/ml. Prior to taking the patient to the operating room, a positron emission/computed tomography scan (PET/CT) was performed as part of a metastatic work-up which revealed intense uptake limited to the area in the ascending colon consistent in the area which had been biopsied (Figure 2). No other areas of the body exhibited abnormal uptake. 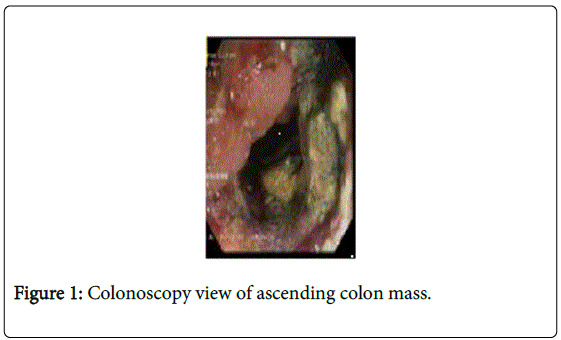 The patient underwent an uncomplicated laparoscopic hand-assisted right hemicolectomy two weeks after the diagnosis (Figure 3). Pathologic analysis of the specimen revealed a Swith mixed Ad-SCC components (Figure 4) with pathologic staging of T3N2a M0 (6/21 positive nodes). At that time, despite absence of any other hypermetabolic uptake of pre-operative imaging, an extensive physical exam was undertaken including the skin, vagina, anus as well as nasopharyngoscopy and esophagogastroduodenoscopy. No signs of a primary malignancy were found during these examinations. It was determined that the ascending colon malignancy was likely the primary process. After recovering from surgery uneventfully, the patient was started on a single drug capecitabine regimen once discussed with the family and patient. Chemotherapy was poorly tolerated secondary to dose limited toxicity and held one month into the treatment cycle. The following month, the patient was started on a fluorouracil/leucovorin based regimen which she also did not tolerate very well A PET/CT was repeated after withdrawal of chemotherapy treatments and metastatic disease was confirmed in the left lobe of the liver with 5.6 cm, and 1.3 cm foci (Figures 5 and 6). Transarterial chemoembolization was discussed with the patient and family but unfortunately, she was unfit to undergo further interventions and elected to enter a hospice center approximately a year after being diagnosed. Pure primary SCC of the colon was first reported in the cecum by Schmidtmann in 1919 and is among the rarest malignancies reported in the digestive tract. Herxheimer had previously described the first case of an Ad-SCC variant as early as 1907. SCC of the colon affects women more often than men and is most commonly found at a mean age of 57.5 years old [2]. Excluding rectal tumors, the proximal colon appears to be more frequently affected. Although rare, it has been suggested that SCC with or without Ad-SCC components has a worse prognosis than adenocarcinoma of the colon with an overall reported five-year survival of 32% versus 66% seen in adenocarcinoma. Poor survival may be secondary to the advanced state of these tumors with nearly half of the patients presenting with metastatic disease at the time of diagnosis. Squamous components of these tumors tend to be more aggressive and metastasize more frequently in comparison to mixed Ad-SCC types [3,4].

Clinically, SCC and its variant of mixed Ad-SCC types present in a similar fashion to patients with adenocarcinoma albeit with a worse prognosis as previously mentioned. Weight loss, rectal bleeding, abdominal pain are commonly reported in these patients as part of their initial presentation [3].

Histiogenesis of these tumors is not well understood although several theories of malignant transformation exist in the literature. Multidirectional differentiation of cell lines via pluripotential stem cells, the presence of embryologic nests of ectodermal cells, and squamous metaplasia of the mucosa lining the bowel have been suggested as potential etiologies for the development of colon SCC. Further supporting these hypotheses is the presence of focal squamous cell differentiation incidentally seen in 0.4% of specimens with detailed examination of excised colorectal adenomas [3]. Chronic inflammatory conditions such as ulcerative colitis, human papilloma virus, and radiation have also been reported to be involved in the development of this malignancy [4-7]. Mixed tumors are further classified into composite type tumors which both components are mixed in a haphazard fashion and collision type tumors which represent coexistence of two adjacent tumor histologic types. However, the clinical consequence of this histologic finding of this arrangement is largely unknown. Low rectal SCC has the potential for the transition into a malignant pathway where epithelial tissue near the dentate line differentiates into glandular and squamous epithelium. The remainder of the colon’s ability to transform remains a mystery despite multiple hypotheses described in the literature [6].

With such few cases of SCC and its variants reported, a lack of discernment presents in terms of management of these patients. Some authors have even suggested treating adenomas with focal squamous differentiation in a similar way to high-grade non-invasive glandular patterns to possibly prevent a malignant transformation [3]. Chemotherapy treatment regimens are limited to small case reports while the best chance offered for survival appears to be provided by surgical intervention.

Surgical resection of SCC appears to be the best chance for a cure for this aggressive disease. Reports of various chemotherapy regimens are limited by the rarity of the disease, coupled with its aggressive nature. No regimen appears to significantly affect long-term outcomes [3]. Reports of radiation therapy in SCC of the rectum have been published but the efficacy is largely unknown [4]. Despite reports of curative resection, the majority of the outcomes in these patients remain poor due to the advanced and aggressive nature of the disease.

Our particular patient experienced no delay in the initiation of surgical or medical treatment but did not tolerate multiple chemotherapy regimens before developing distant metastatic foci. This may have contributed to the early metastatic recurrence. Further research is needed in order to better understand and treat this rare disease with more effective treatment algorithms.