Copyright: © 2014 Sakamoto S, et al. This is an open-access article distributed under the terms of the Creative Commons Attribution License, which permits unrestricted use, distribution, and reproduction in any medium, provided the original author and source are credited.

However, the eradication success rate has decreased recently due to the occurrence of antibiotic-resistant bacteria, due to the three-drug combination therapy of a proton pump inhibitor (PPI), and two antibiotic drugs; amoxicillin (AMPC) and clarithromycin (CAM) namely PPI/AC therapy, which comprise the primary eradication regimen [2]. Recently, about 30% of patients with H. pylori infection are failed to eradicate by primary PPI/AC therapy by CAM-resistant H. pylori increasing [3]. In 2007, a three-drug combination therapy using antibiotic metronidazole (MNZ) instead of CAM, namely PPI/AM therapy, was indicated under national health insurance as a secondary eradication regimen, whereas the use of a primary eradication scheme was excluded as an insurance-based indication [4,5].

The study was performed retrospectively to check the medical records of consecutive patients infected with H. pylori who desired to undergo initial H. pylori eradication treatment in Katori City, Chiba Prefecture, Japan, between 2008 and 2011. A total of 120 patients with H. pylori infection were eligible for inclusion: 62 were male (51.7%) and 58 were female, with a mean age of 62.6 years. The study patients were outpatients. Inclusion criteria were: 1) patients were over 18 years old; 2) patients had positive H. pylori infection at the primary eradication therapy; 3) patients suffered a controlled adult disease such as hypertension, hyperlipidemia, and diabetes mellitus to visit a family doctor at regular intervals; and 4) patients gave informed consent to each eradication therapy. Exclusion criteria were: 1) patients receiving any H. pylori infection therapy before the study; 2) patients with severe anemia and/or active bleeding due to active gastroduodenal ulcer, because they were referred to a specialized hospital.

H. pylori infection was diagnosed pathologically by gastric mucosal specimen obtained by biopsy through upper endoscopy in all study patients. 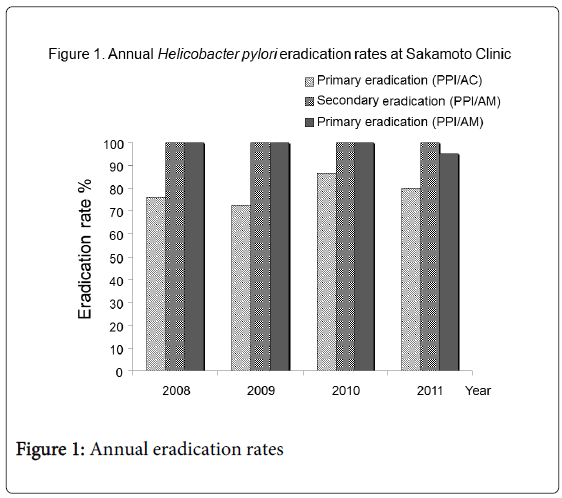 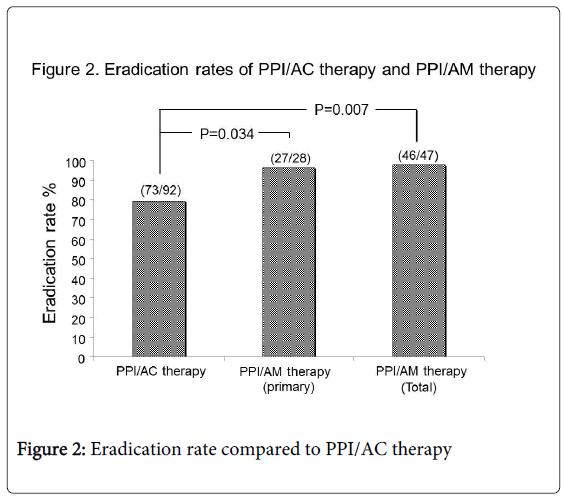 The frequency of MNZ prescription in daily clinical practice in Japan is low compared to macrolides or new quinolone preparations. Furthermore, MNZ has been shown to be 96.8% effective on susceptible strains (61/63) and 81.8% on resistant strains (18/22), and although a significant difference was noted between the 2 types of strains, even MNZ-resistant bacteria exhibited an eradication rate of 80% or higher. The primary eradication rate of resistant bacteria by using MNZ in Japan was between 2 and 5%, and the minimum inhibitory concentration of MNZ showed no major change over the past few years, and thus, it has the potential for high eradication rates in the future as well. Moreover, although PPI/AC therapy shows a significant difference in resistance rates depending on age, studies have shown that PPI/AM therapy does not show this discrepancy. Recent studies have also described the use of a four-drug combination therapy using levofloxacin [12,13], as well as a three-drug combination therapy using ecabet sodium [14]. Although these drug combinations show markedly high eradication rates compared to PPI/AC therapy, the results have not been compared to PPI/AM therapy, and are currently regarded as a potential option for tertiary eradication. PPI + AMPC + CAM + MNZ therapy has also been reported [15], but is not expected to have a high eradication rate based on the development of resistance to CAM in Japan.

In conclusion, although PPI/AM therapy for H. pylori eradication is currently used in Japan as a primary off-label regimen, it has achieved a much higher eradication rate than PPI/AC therapy, and should be recommended as the primary treatment for patients with H. pylori infection.