Pseudoangiomatous Stromal Hyperplasia (PASH) is one of the rare benign breast lesions. It typically occurs in women of reproductive age however it is reported in postmenopausal women under hormonal therapy. PASH is frequently incidental finding in breast biopsies but it may also manifest as palpable mass. We report a case of PASH which correlates with radiological and pathological ﬁndings. The knowledge of this rare lesion may be of importance to surgeons & radiologists for proper adequate management.

PASH of the breast is a benign myofibroblastic process, first described by Vuitchet et al. in 1986. The age of the diagnosis varies between 14 to 74 years. The size of PASH usually ranges between 0.6- 12 cm with most cases ranging from small to medium size [1]. The etiologic factors of PASH are unknown, but most investigators think that it represents a proliferative response of myofibroblasts, probably to hormonal stimuli [2]. Imaging features are not sufficiently specific to allow for a prospective diagnosis. Histological confirmation, preferably with core biopsy, should always be considered [3]. The following case report illustrates the radiographic abnormalities caused by this lesion. 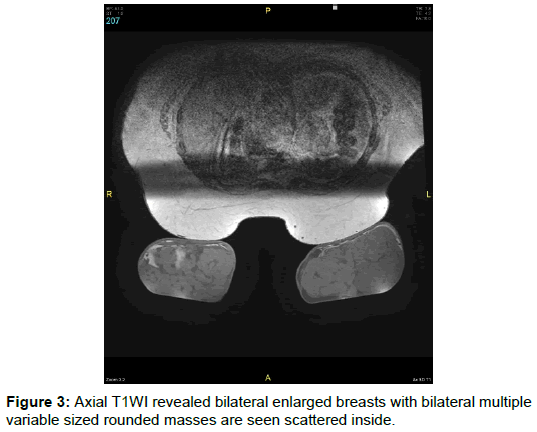 Pseudoangiomatous stromal hyperplasia (PASH) is an uncommon benign proliferative breast tumor composed of complex, anastomosing slit-like pseudovascular spaces, which are either acellular or lined by slender spindle-shaped stromal cells. Our case presents clinically as a bilateral multiple palpable breasts masses with the clinical and radiological assessment coping bilateral multiple fibroadenoma and also MRI findings cope with multiple bilateral lesions with benign criteria however the histo-pathological findings cope with PASH. Yoo et al. [4] had reported that clinical and radiological findings of PASH resemble those of fibrodenoma and all imaging modalities have no specific features to characterize PASH and distinguish it from other pathologic entities. In asymptomatic patients it usually presents as a breast imaging-reporting and data system (BI-RADS) type 3 lesion, suggesting a probably benign lesion [1]. In our case mammography revealed bilateral enlarged dense breasts with bilateral multiple variable sized masses noted and this agree with Solomou et al. [1] stated that say mammography of PASH can reveals single or multiple non-calcified masses, with well circumscribed margins, usually ranging from 1-10 cm, but it can also present as an asymmetric appearance of the gland whose size or density increases over time [1]. On our ultrasound they showed bilateral diffuse enlarged breasts with multiple variable sized hypo echoic masses seen scattered inside and this agree with Hargaden et al. [5] that say ,PASH has no characteristic appearance, including both its margins and echogenicity. It usually presents as a round or oval solid single or multiple masses, mainly hypoechoic and rarely hyperechoic with a central hypoechoic area. The presence of acoustic shadow is not very often [5]. On MRI images our case show bilateral enlarged breasts with bilateral multiple variable sized rounded masses are seen scattered inside showing type I kinetic time intensity curve and this agree with Mai et al. [6] that say nodular PASH has the same characteristics as a fibroadenoma, with rapid enhancement in the two minutes after contrast injection, followed by a slowly increasing enhancement during the rest of the examination. While diffuse PASH presents as a focal or segmental non-mass like clump of enhancement with a plateau or persistent phase [6]. PASH can be a relatively common incidental finding at breast biopsy. PASH radiologically mimics that of breast fibroadenoma, on histology, it is characterized by the presence of open slit-like spaces in dense collagenous stroma which is lined by a discontinuous layer of flat, spindle-shaped myofibroblasts with bland nuclei. It can also contain complex anastomosing spaces that may be confused with an angiosarcoma at histologic analysis [7].

Pseudoangiomatous stromal hyperplasia (PASH) is a rare benign breast lesion belonging to benign myofibroblastic process. PASH radiologically mimics that of breast fibroadenoma and histologically it may be confused with an angiosarcoma. PASH is considered to be a lesion of BI-RADS 3, which means probably benign. Proper diagnosis of this rare breast lesion is important for proper treatment.

Approval of the medical ethics committee was obtained for publication of this case report and accompanying images. The case was done in KAAH, KSA and ministry of health in October 2016.

Copyright: ©2018 Alawi M, et al. This is an open-access article distributed under the terms of the Creative Commons Attribution License, which permits unrestricted use, distribution, and reproduction in any medium, provided the original author and source are credited.