Copyright: © 2017 Elkhwad M, et al. This is an open-access article distributed under the terms of the Creative Commons Attribution License, which permits unrestricted use, distribution, and reproduction in any medium, provided the original author and source are credited.

The use of NCPAP as a method of respiratory support was first described in 1971 by Gregory, et al. [1] and has been proven to be an effective alternative to mechanical ventilation when needed [2]. It has been shown to improve oxygenation and decrease the rate of Chronic Lung Disease (CLD) and duration of oxygen therapy in neonates with physiologic benefits such as maintaining lung volume, lowering upper airway resistance and reducing obstructive apnea [3]. Heated humidity high flow nasal cannula (HHHFNC) is a newer method of respiratory support that has been introduced in recent years for respiratory support in neonates [4]. It delivers high flow humidified oxygen utilizing a simple nasal cannula to provide positive pressure ventilation and has been used with the assumption of comparable respiratory support with conventional NCPAP [4]. In spite of the lack of large randomized control studies HHHFNC has been widely accepted for use in neonatal units in some developed countries such as the United Kingdom and the United States [5].

HHHFNC appears to have a number of advantages over NCPAP including reduction in number of ventilator days and nasal trauma. It has been suggested that NCPAP is associated with increased handling as a result of mechanical difficulties in appropriate fixation of prongs resulting in increased agitation and higher risk of septal trauma [1,3]. HHHFNC on the other hand, provides humidified flow to the baby’s nasal passages and allows for much easier handling of babies for procedures and care as the connection is in the form of a nasal cannula. It also allows for easier feeding with formula or breastfeeding and cuddling, enhancing bonding between parents and baby [6].

Few major drawbacks that have been identified with the use of HHHFNC include the fact that there is currently no way of monitoring the airway end-distending pressure. There is therefore the theoretical risk of lung over-distension, increase work of breathing and pneumothoraces [7,8]. In addition, there is an increased risk of sepsis due to the connection with a water source which is a potential source of contamination [9,10]. However, recent studies failed to show an increased risk of sepsis with the use of Vapotherm with the added advantage of improved growth associated with its use [11].

The purpose of this randomized controlled trial to study, if there is difference between HHHFNC and nCPAP in preventing extubation failure when applied as noninvasive respiratory support modes for neonates with respiratory dysfunction.

The study was approved by the Institutional Review Board of Akron Children’s Hospital and informed consent was obtained for each patient. In this randomized controlled study, we prospectively compared the use of HHHFNC and NCPAP in the immediate postextubation period for preterm infants between 24 and 28 weeks gestations with Respiratory Distress Syndrome.

Sixty preterm infants with gestational ages between 24 and 28 weeks admitted to the Akron Children’s Hospital NICU from July 5, 2009 to April 16, 2012 were enrolled in the study and randomly assigned to NCPAP or HHHFNC post-extubation following administration of surfactant.

• Preterm neonates with gestational age of 24 to 28 completed weeks.

• In the case of twins, both neonates were included in the same treatment arm.

• Success to wean with 24 hours to extubate.

• Parental written informed consent for participation in the study obtained on admission into the hospital or prior to delivery.

• Infants delivered to mothers with ruptured membranes of more than three weeks duration.

• Participation in another clinical trial of any placebo, drug, biological, or device conducted under the provisions of a protocol.

At delivery the decision as to whether a baby failed to respond to CPAP requiring intubation and surfactant was made by the attending neonatologist based on the consideration of respiratory distress, metabolic acidosis and increased oxygen requirement or apnea.

All extreme low birth infants who require intubation for severe RDS and respiratory failure will receive surfactant and then weaned of mechanical ventilation as tolerated with the aim to extubate them within the first 24 hours of life. Infants will also receive intravenous loading dose of caffeine 20 mg per kilogram of body weight before extubation and then continue on maintenance dose of 10 mg per kilogram. These babies then will be placed on bubble CPAP and weaned off thereafter.

We used Tri-Anim Vaptherm the Precision Flow, which is a selfcontained unit that provides flow rates up to or 8 LPM (Infants) of blended oxygen that is heated and humidified. For NCPAP, we used Fisher and Paykel Healthcare, Bubble CPAP System. Babies assigned to NCPAP received bubble NCPAP at 5cmH2O and those assigned to HHHFNC received a flow rate up to 5L/min with increases of NCPAP to 6cmH2O at the discretion of the neonatologist.

The gestational age was based on maternal dates. Ballard physical examination was used if the dates and physical examination determinations differed by more than two weeks. Grade III or IV IVH diagnoses were based on head ultrasound results. Presence of PDA was based on echocardiogram findings. Retinopathy of prematurity (ROP) is diagnosed per pediatrics ophthalmologist. Sepsis was defined as a positive culture result from blood with concomitant clinical symptoms. Positive cultures were defined as having positive growth from the cerebrospinal fluid, tracheal, blood, or urine specimens (Table 1).

Table 1: Characteristics of the study infants.

Currently there is no agreed upon classification available to describe the severity of nasal trauma secondary to nasal application of noninvasive apparatus in neonates. We therefore, used the standardized classification of the decubitus lesions from the US National Pressure Ulcer Advisory Panel (NPUAP) [12,13] to document our nasal trauma stages.

Stage I: erythema not blanching, on an otherwise intact skin.

Charts were reviewed and data was analyzed using SAS 9.2 based on primary and secondary outcome measures. To identify differences between the arms of the study, univariate analysis was performed using Student’s t test (continuous data) or the X2 test (categorical variables) accordingly. Mann-Whitney U nonparametric tests were used in the presence of non-normal data. Statistical testing assumed an alpha significance level of 5%, thus statistical significance was defined as p ≤ 0.05. Odds ratio (OR) and 95% confidence interval (CI) were calculated for each 2 × 2 table. All analyses were performed on an intention to- treat basis, and infants remained in their assigned group for all outcomes.

Sixty preterm infants with gestational ages between 24 and 28 weeks admitted to the Akron Children’s Hospital NICU from July 5, 2009 to April 16, 2012 were enrolled in the study and randomly assigned to NCPAP or HHHFNC post-extubation following administration of surfactant.

Six babies met exclusion criteria and were excluded from the study, failed to be extubated within 24 hours of birth (Figure 1). One infant expired on day of life 24, for causes not related to the study and was not included in the final results. Data was available for 53 patients where 24 received NCPAP and 29 received HHHFNC (Figure 1). 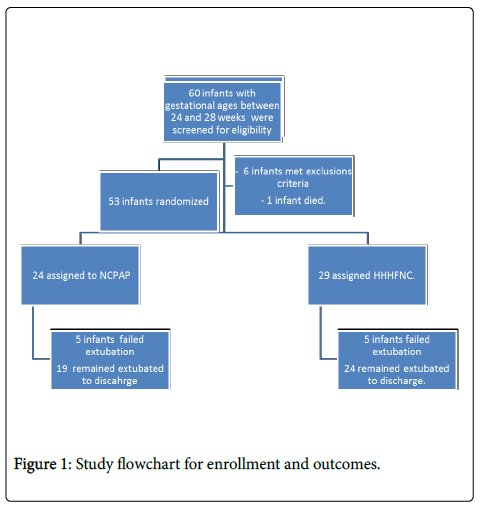 As shown in Table 1, the average birth weight for infants in both groups was comparable at 950 grams, as well as gestational age of 26 weeks. There was no statistically significant difference regarding race, gender, prenatal steroids or Apgars scores between the two groups.

Ventilation induced lung injury in very low birth weight infants is associated with increased morbidity, including increased susceptibility to infection and chronic lung disease [14-16]. Among extremely- lowbirth- weight infants born at centers in the National Institute of Child Health and Human Development (NICHD) Neonatal Research Network between 1993 and 1997, immaturity was the leading cause of early death and pulmonary conditions was the predominated cause of death for those surviving for late death [17]. Changes in neonatal care since this period, including changes in prenatal use of glucocorticoids and antibiotic agents, use of surfactants, and ventilation strategies may have led to a relative decrease in deaths attributable to pulmonary causes [18].

As a consequence, many centers encourage the use of non-invasive ventilation, primarily NCPAP as a mode of ventilation for neonates with RDS, following surfactant administration. In recent times, high flow humidified oxygen appears to be increasingly used compared with NCPAP as a result of perceived benefits which have not been convincingly proven [5].

Many questions continue to be raised with regards risk of sepsis and unknown airway end distending pressure despite the advantage of decreased nasal trauma.

Our results from this study, suggests no significant increase in failed extubation following administration of at least two doses of surfactant in preterm neonates with RDS. 17.2% of neonates placed on HHHFNC failed extubation and required re-intubation within five days of initial extubation compared with 20.8% of neonates placed on NCPAP (p=1.000). This contrasts with a previous study published in 2006 by DM Campbell, et al. where 12 of 20 infants randomized to HHHFNC required re-intubation within seven days compared with 3 of 20 infants randomized to NCPAP (p=0.003). Of the 12 who failed exubation in the HHHFNC group, 7 were reintubated within 48 hours [7]. But our results were consistent with a recent randomized, controlled, unblinded noncrossover trial in 432 infants ranging from 28 to 42 weeks’ gestational age with planned nCPAP support, as either primary therapy or postextubation [19]. Another study by Collins et al who randomized a total of 132 ventilated infants younger than 32 weeks' gestation receives either HHHFNC or NCPAP [20]. In his study HHHFNC and NCPAP produced similar rates of extubation failure. Nasal-trauma scores were lower in the nasal-cannulae group than in the CPAP group, which is consistent with our findings.

In addition this study shows no significant difference in duration of respiratory support or duration of oxygen requirements in comparing the two modes of ventilation. Mean duration of respiratory support using HHHFNC was 37.45 days compared with 40.04 days using NCPAP (p value 0.66). Duration of oxygen requirement for infants placed on HHHFNC was 49.41 days compared with 43.75 days for infants placed on NCPAP (p value 0.58). This implies similar risks of chronic lung disease (CLD) with the two modalities of ventilation. Significantly increased risk of nasal trauma was documented with the use of NCPAP. There was no nasal trauma was reported for infants placed on HHHFNC compared to 25% for infants placed on NCPAP (p=0.006). Although some studies have documented a significantly increased risk of Rastolnia infection from contamination of units used for administering HHHFNC [9] including one case study documenting association with pneumocephalus, pneumo-orbits and scalp emphysema [21], this study found no significantly increased risk of sepsis associated with the use of HHHFNC. 3.5% of babies placed on HHHFNC developed sepsis compared with 12.5% of babies placed on NCPAP. (p=0.318). Similar to a previous study [7], no significant difference was demonstrated with associated ROP and IVH in this study. No significant difference was found in the incidence of PDA.

Limitations to our study include our small sample size as well as inability to blind investigators to the different modalities of ventilation.

There is no significant difference between the use of HHHFNC and NCPAP in the immediate post-extubation period for preterm infants between 24 and 28 week gestations with Respiratory Distress Syndrome. More studies are needed to establish this finding and perhaps a multi-institutional study will be a beneficial next step in order to capture a larger sample size.

All authors have no interests relevant to the topic discussed in the submitted manuscript.