Copyright: © 2016 Ghormallah A, et al. This is an open-access article distributed under the terms of the Creative Commons Attribution License, which permits unrestricted use, distribution, and reproduction in any medium, provided the original author and source are credited.

Rapunzel syndrome is a variety of trichobezoar which has a tail extending down through pylorus to small intestine. Most reported cases were female with underlying psychiatric problem. We are reporting 7 years old girl presented with history of chronic abdominal pain (discomfort), progressive in nature, abdominal distention and weight loss. Radiological work-up is consistent with huge filling defect in stomach. Laparatomy and gastrotomy was done, a huge trichobezoar with a long tail extending to proximal part of small intestine was removed. Post- surgical hospital course was smooth with no complications and she was discharged in the 2nd week, given a follow up with psychiatrist and psychologist for evaluation and management to prevent recurrence

Bezoars are collections on concretions of indigestible foreign materials that accumulate and coalesce in gastrointestinal tract. There are different types of bezoar which is classified according to the contents or composition. Phytobezoar is type of bezoar that is composed of indigestible plant materials like vegetables frequently reported in patients with impaired digestion and decreased gastric motility. Trichobezoar is a bezoar formed from hair. The Rapunzel Syndrome is a very rare and extreme case of this bezoar. Lactobezoar is a bezoar comprising milk curd commonly seen in infants receiving formula food. Other materials like medications, tissue paper, tar fungus and etc. can also cause bezoar.

Trichobezoar is a collection of hair that collects in the stomach and fails to pass through the small intestine. It was first described in 1779 by Baudomant [1]. Almost, exclusively we see in young females with psychiatric disorders like trichotillomania. 50% of the patients have history of trichophagia [2]. The main predisposition to bezoar formation is altered gastrointestinal tract anatomy or disordered gastrointestinal tract motility/physiology. More than 90% of the cases reported were female [3]. When the trichobezoar has a tail extending into the small bowel, is termed as Rapunzel Syndrome.

A 7 years old Ethiopian girl brought in our hospital with 2 days history of Mild abdominal pain and distension, frequent non-bilious vomiting and feeling of heaviness in the stomach. Mother noticed progressive weight loss over few months.

Conscious, unwell looking, pale but not jaundiced, no respiratory distress or cyanosis, underweight, no dysmorphic features.

All vital signs (v/s) are within normal values

Head examination: has minimal hair loss all over the head but is more in the left side. 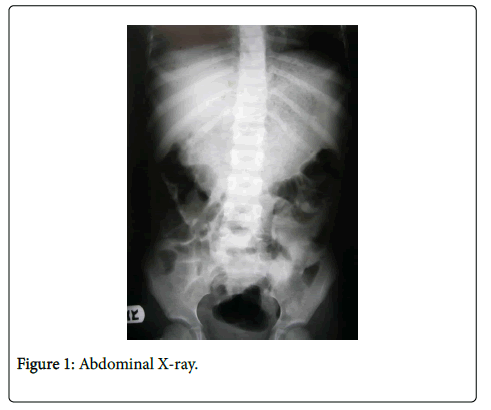 Abdominal ultrasound showed a linear echogenic line with posterior acoustic shadowing in the region of the clinically palpable mass. Laparotomy and Gastrotomy were done. A huge Trichobezor (18x9x6cm) with a long tail (50 cm) extending to the proximal part of jejunum extracted was removed (Figure 3). 2 layers closure of the stomach incision was done. After the operation, there was no leakage. She started feeding 5 days after the operation. No vomiting was recorded. The wound was clean and healed well. 2 weeks later her hair starts to grow again. Her body weight also increases. She was referred to psychologist.

Razpunzel Syndrome: First case was described by Vaughan et al. in 1968[4]. Recent literature review reveals about 100 odd cases (Medline Search till Sept 2012) [5]. Few more reports of this syndrome were published in medical literature after this date. Trichobezoar formed over years and initially Asymptomatic and remain so until bezoar increase in size and leading to intestinal obstruction. Of 131 collected cases of trichobezoar, palpable abdominal mass (87.7%), abdominal pain (70.2%), nausea and vomiting (64.9%), weakness and weight loss (38.1%), constipation or diarrhea (32%), hematemesis (6.1%), anemia (62%) [6,7]. Diagnosis usually made late, especially with absent history of trichophagia. Only 50% of patient, there will be history of trichophagia [8].

Rapunzel Syndrome can have mechanical and traumatic complications. Gastric outlet obstruction and intestinal obstruction usually in terminal ileum are an example of mechanical complication of Rapunzel Syndrome. Traumatic complications like gastric ulceration, hemorrhage, protein losing entropy, malabsorption, pancreatitis, intussusception, appendicitis and obstructive jaundice can also occur. Free perforation of the stomach or small intestine is an unusual complication [9]. Gregory, et al. described a typical intussusception of terminal ileum in a 7-year-old girl due to Rapunzel Syndrome [10]. Denise Estefan reported a case of neglected Rapunzel Syndrome in a 5-year-old child lead to a fatal outcome [11]. Gastric ulcer perforation due to trichobezoar was described by Majid, et al. in 2003 [12].

This disease is impossible to diagnose by plain film alone. USG has been shown to be effective diagnosis in up to 88% cases, however calcified mass, neuroblastoma, aneurysm, abscess or fecal material can appear similarly on US. CT scan with contrast has shown to diagnose 97% of bezoars (appear as a free floating defect) [13]. Obtaining a piece of matted hair through gastroscope is pathognomic [14]. In managing this disease, small ones can be removed endoscopically mantled by pulling, using water jet, enzymatic therapy, Nd: yag laser. Mechanical lithotripter, Wai, et al. have emphasized on endoscopic retrival of small bezoars [15]. Endoscopic therapy was not attempted in our patient as the mass extend beyond pylarus and fragmentation was difficult. The treatment of choice of large bezoars is surgical by Gastrotomy or Enterotomy[16]. Lapraroscopically, Madan, et at. emphasized on feasibility to retrieve a.f.b. from the stomach via laproscopic surgery especially the majority of the Patients are young females [17]. Yuri Nirasawa, et al. reported successful retrieval of large trichobezoars 92cm through laproscopic gastrotomy and removed via a small suprapupic incision [18]. Needless to say that the management should focus on the correction of the underlying problem so psychotherapeutic measures are always recommended with long term follow up [19]. In 2003, Sattar, et al. reported the first recurrence of Rapunzel Syndrome in a 10-year-old girl due to negligence of the underlying problem [20,21].

Rapunzel Syndrome is a very rare disorder that should be considered in young females with psychiatric problems. They usually present with abdominal mass, abdominal pain, vomiting and anemia. Abdominal ultrasound and CT scan with contrast are helpful. Tissue biopsy is pathognomic. Surgical removal is the treatment of choice for large bezoars. Complications may occur but mortality is extremely rare and psychotherapeutic measures are recommended to prevent recurrence.