1Ministry of Electricity and Water, Kuwait

Copyright: © 2016 Semary MM, et al. This is an open-access article distributed under the terms of the Creative Commons Attribution License, which permits unrestricted use, distribution, and reproduction in any medium, provided the original author and source are credited.

The kinetics of the cementation of chromium ions from potassium dichromate solution onto fluidized bed of iron particles were investigated in a stirred tank reactor. Variables studied were physical properties of the solution, stirring speed (rpm) and temperature. The rate of cementation was found to increase with increasing rpm and concentration. The rate of cementation was expressed in terms of the liquid–solid mass transfer coefficient (k). The data were correlated by the equation:

The high rates of mass transfer obtained in this work and the high area per unit volume of fluidized bed of iron qualify them for building high space time reactors suitable for purification of hydrometallurgical leach liquors and removal of heavy metal from waste water by cementation.

Hexavalent and trivalent chromium are the stable form of presence of chromium in water. Cr(IV) is known to be carcinogenic and toxic; thus causing health problems e.g., vomiting, severe diarrhea, pulmonary congestions and liver damage. Whereas Cr (III) is less toxic [1,2] Cr(III) is essential in human nutrition (especially in glucose metabolism) [3-6]. Chromium ions are non-degradable and can accumulate in living tissue. Although some heavy metals in low dosage are essential micronutrients for plants and animals, in higher doses they can detrimentally affect the health of most living organisms [7-9].

From economical aspect, the advantages of chromium applications in different industries [10,11], such as the production of stainless steel, in electroplating, refractory industry, tanning of leather, pigment and chemical industry, etc., contrast with its negative external effects as a hazardous pollutant. Numerous soils, waste sites, groundwater, and surface waters are contaminated with anthropogenic Cr(VI) [12-14].

Cementation is one of the oldest and simplest hydrometallurgical processes, which has been used as a means of extracting metals from solution. Only in the past 20 years, considerable attention has been paid to two main industrial applications of cementation. The first involves the recovery of metals from leach solution [57-59] and the second is concerned with the purification of electrolyte solutions to remove metals which are more electropositive than the metal to be deposited, e.g., Cu, Co, Ni, Cd from ZnSO4 electrolyte [61-64].

All chemical reagents [K2Cr2O7, H2SO4] were in analytical reagent grade. Stock solutions of 0.001- 0.002- 0.003 and 0.004 M of K2Cr2O7 were prepared by dissolving AR grade chemicals in distilled water. Iron particles were etched in dilute HCl to remove the oxide layer, washed with distilled water and dried before each run. The size of iron particles was between 1.0 and 0.8 mm (≅0.9 mm). 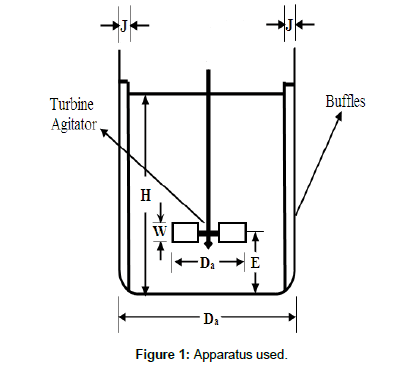 Procedure: Before each run 0.75 L of acidified potassium dichromate solution were introduced to the container. The rate of cementation of Cr6+ on the iron particles was determined by measuring the change in Cr6+ concentration with time. The time dependence of chromium concentration was monitored during cementation by withdrawing a sample of 5 cm3 at different time intervals for analysis by titration against standard ferrous ammonium sulfate (0.01N) in presence of sodium diphenylamine sulfonate as an indicator.

The solution viscosity and density needed for data correlation were determined experimentally by an Ostwald viscometer and a density bottle respectively [65], while the diffusivity of acidified potassium dichromate was obtained from the literature [66,67].

The mass transfer coefficient of the diffusion controlled cementation of chromium on zinc particles was obtained under different conditions from the potassium dichromate concentration-time data. Figure 2 show that the data fit the equation:

which upon integration yields;

where: m=mass of iron particles; ρ=density of iron; dp=particle diameter. The mass transfer coefficient (K) was calculated from the slope of the straight line obtained by plotting ln(Co/C) versus time typical figure is shown in Figure 2. 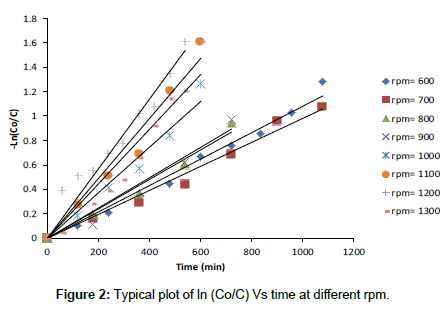 To correlate the present mass transfer data, the method of dimensional analysis was used. The present data could be correlated by the functional equation: 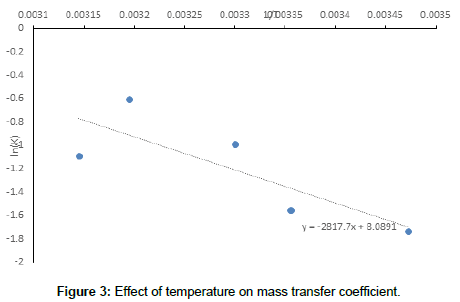 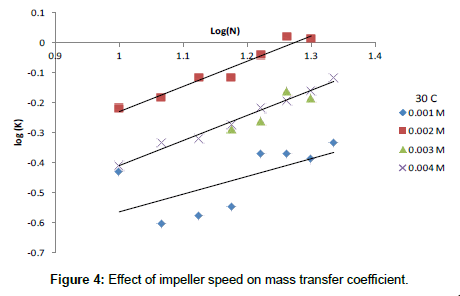 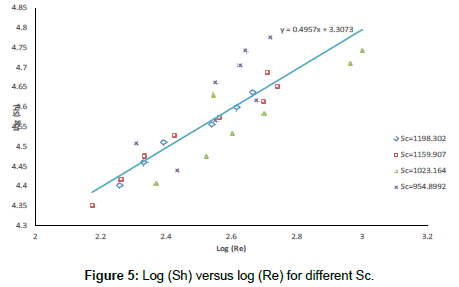 The use of fluidized bed of iron to reduce Cr6+ to Cr3+ which is non-toxic found to be diffusion controlled. The using of the powder increase the surface area and thus the rate of reduction i.e., it offers high space time yield cementation reactor suitable for reduction of Cr6+. The present mass transfer equation can be used for fluidized (suspended) bed reactor.