Copyright: © 2016 Gonçalves RL, et al. This is an open-access article distributed under the terms of the Creative Commons Attribution License, which permits unrestricted use, distribution, and reproduction in any medium, provided the original author and source are credited.

Background: Pulmonary disorders have been identified in Parkinson's disease (PD) since its description. They are associated with high mortality. However, there have been limited investigations on respiratory function in the patients with PD. The mechanisms mediating this association need to be better clarified. The relationship between maximal inspiratory pressure (MIP) and the forced vital capacity (FVC) in these individuals has not been investigated yet.
Objective: The objective was to assess and compare the respiratory function in older elderly with and without PD in order to determine the prevalence of respiratory dysfunction and the influence of MIP in FCV. Methodological design: Cross-sectional study which evaluated 41 elderly with PD and 41 elderly without (control group).
Inclusion criteria: For patients with PD: level of disability 0-3 Hoehn and Yahr scale and levodopa substitution therapy. For all participants: more than 60 years, no smoking, and no diagnosis of respiratory dysfunction and have physical and cognitive conditions to perform the tests. Pulmonary function was investigated by spirometry and MIP through manovacuometry. For the comparison between the groups was used the Student's t test and Mann Whitney and the correlation between the variables of interest was investigated by linear regression model. Results: There was a higher prevalence of respiratory disorder in patients with PD, whose major ventilation dysfunction was restrictive. There were significantly lower values % FVC and forced expiratory volume in the first minute (FEV1) in patients with PD and a direct association between FVC and MIP. This association can only be observed in the control group in the elderly who presented restrictive disturbance.
Conclusion: Patients with PD showed important modifications of pulmonary function even in the early stages of the disease. Thus, the pulmonary evaluation must be systematically performed in subjects with PD and the impact of pulmonary rehabilitation on these dysfunctions should be the focus of further research.

Parkinson´s disease (PD) is the second most prevalent neurodegenerative disease in the world [1-8]. It results, pathologically, from the progressive idiopathic loss or degeneration of the dopaminergic neurons of the substantia nigra of the midbrain causing a combination of motor problems-namely, bradykinesia, resting tremor, rigidity, flexed posture, “freezing,” and loss of postural reflexes. The pneumologic problems are one of the most common causes of death in these patients. However, most of them rarely have complaints despite the final course of disease and the disturbance is usually unnoticed by clinicians [8]. There are strong correlation between pulmonary dysfunction and weakness, reduced respiratory functional capacity and increased risk of death [1-8]. Several aspects of respiratory dysfunction in these individuals need to be better understood: the most prevalent disturbance, the pathophysiological mechanism and whether pulmonary rehabilitation is able to positively alter the natural course of the disease. The objective of the study was to evaluate and compare the respiratory function in older adults with and without PD and the influence of inspiratory muscle in forced vital capacity.

Cross-sectional study approved by the research ethical committee (number CAAE:41071114500005020) and patients gave their written consent to participate in the study. Were evaluated 41 elderly pepople with PD with mild to moderate level of disability (0-3 Hoehn and Yahr scale), group PD-PG and 41 elderly people without PD, control group, CG. All patients were on levodopa therapy. The pulmonary function was investigated by spirometry (Cardinal Health, model Microlab V002ML3500) matching the standards of the American Thoracic Society recommendations for diagnostic spirometry and the maximal inspiratory pressure (MIP) by manovacuometry (analogic model WIKA, modelo cl 1.6). Were evaluated forced vital capacity-FVC and forced expiratory volume in 1 second-FEF1, Peak flow-PFE, Forced expiratory flow rates between 25-75% of the expiration- FEF 25-75%. We consider normal spirometry FEV1/FVC ≥ 70%, FVC ≥ 80% of predicted; restrictive ventilatory disease FEV1/FVC ≥ 70%, FVC<80%, and obstructive ventilatory disease FEV1/FVC<70%, FVC ≥ 80%. Analytic approach the numerical variables were obtained from the central tendency measures average or median and variation as standard deviation (SD±) or interquartile range (IQR). For categorical variables, the results were expressed by frequency and percentage. For the comparison between CG and PG was used the Student's t test for parametric variables and Mann Whitney for nonparametric variables. To verify the correlation between variables we used linear regression model.

Data from this study demonstrated a high prevalence of respiratory disorders in PG:70.7%. This prevalence was significantly higher than CG: 29.3%, p<0.001, indicating that respiratory dysfunction is related to PD and present even in early stages. The most prevalent disorder was the restrictive, PG:48.8% and CG:29.3%, p<0.001. The obstructive lung disorder was only found in PG:22%.

In the analysis of respiratory function were found significantly lower values % FVC and FEV1 in PG (Table 1).

Table 1: Spirometric variables in the elderly with and without PD.

The MIP values (cm H2O) median (IQR): -85 (-100, -72.5) CG, and -70 (-100, -50) PG, p=0.078. In order to investigate the influence of MIP in FVC of individuals with and without DP in the presence and in the absence of restrictive respiratory disorder, we analyzed the association between FVC and MIP in both groups using the linear regression model. The figure 1 shows that in subjects with normal lung function (box left) MIP showed no direct association with FVC in the CG, however, showed a direct association with FVC in PG (R2=0.125). Thus, the factor that causes direct correlation between FVC and MIP was the presence of PD (p=0.03). These results suggest that in patients with PD even without respiratory disorder there is correlation between MIP and FVC. When analyzing the correlation between FVC and MIP in the group of subjects with restrictive lung disease (box right) was similar behavior between PG and CG, showing a direct correlation (R2=0.345). Thus, in the presence of restrictive lung disease there is direct correlation between MIP and FVC even in absence of PD (p=0.003). 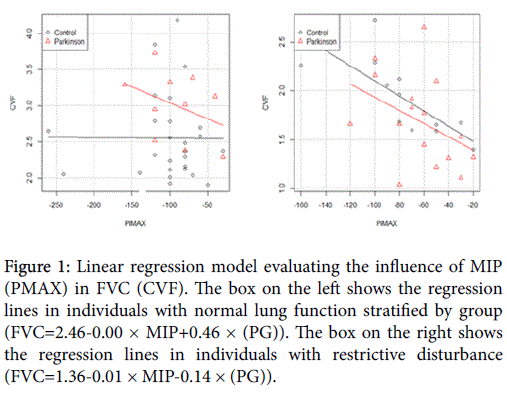 The results of the present study demonstrated that there was a high prevalence of respiratory disorder in patients with PD even in the early stages of the disease. The restrictive dysfunction was more prevalent. However, the obstructive lung disorder was also identified among these patients. In the elderly without Parkinson's disease only restrictive disturbances were identified. These findings suggest that respiratory dysfunction is involved in PD.

Scientific evidence has shown that the restrictive lung disease is prevalent in the elderly population in general, ranging from 6 to 15% [5,6]. It is estimated that approximately 15% of the adult population of industrialized countries present chronic obstructive pulmonary disease (COPD), and this prevalence increases with age and with smoking, the main etiology [6]. It is possible that the absence of obstructive lung disease in elderly without Parkinson's disease can be the result of the exclusive participation of nonsmokers without prior diagnosis of pulmonary disorder in the present study. Thus, the results suggest that the presence of obstructive disorder in patients with PD is related to the disease. Both restrictive disease and obstructive ventilatory disease are associated with higher mortality in the elderly and were prevalent in individual with Parkinson´s disease [1-8].

There were significantly lower values % FVC and FEV1 in in patients with PD. These data are in agreement with several authors who demonstrated reduction in FVC and FEV1 in patients with PD [1-4,7,8]. They attributed this finding to the lower ribcage expansion as a result of osteoarthritis in the spine, muscle stiffness and bradykinesia. Some studies also reported lower FEV1/FVC and PFE in subjects with PD [8]. However, the results of this study showed no difference between groups with respect to these variables perhaps because we include only individuals in the early stages of the disease.

The results of the present study demonstrated that there was a direct association between FVC and MIP in patients with PD which is only seen in the control group in the presence of restrictive disorder. In individuals with PD, even those without pulmonary disorder, it is possible that changes in respiratory mechanics due to the rigidity, bradykinesia, and muscle incoordination led to a greatest need for respiratory muscle strength.

It was concluded that individuals with PD showed significant changes in lung function even in the early stages of the disease. The most prevalent disorder was the restrictive with reduction in FVC and FEV1. In individuals with PD there is a direct correlation between MIP and FVC. These results might expand the knowledge about PD and help to clari0066y the clinical importance of pulmonary evaluation in these patients. The compromised pulmonary function in PD and the impact of pulmonary rehabilitation on these dysfunctions should be the focus of further research.

The authors have no conflict of interest.