Right Sided Colonic Varices: 2 Cases and Review of the Literature

Copyright: © 2015 van Geenen EM, et al. This is an open-access article distributed under the terms of the Creative Commons Attribution License, which permits unrestricted use, distribution, and reproduction in any medium, provided the original author and source are credited.

Background: Colonic varices (CV) are a rare cause of lower gastrointestinal bleeding. Although approximately 90 cases of CV have been reported, mainly in bleeding patients with portal hypertension, the prevalence of (asymptomatic) CV is likely to be underestimated.

Conclusion: Colonic varices are rare and more prevalent in patients with liver cirrhosis. Especially in this group, rectal bleeding and anemia with normal upper GI investigations, should be investigated with a colonoscopy. Treatment of CV is not well established and depends on the etiology and severity of clinical presentation.

A 34-year-old woman with a history of chronic diarrhea that had started during the third trimester of pregnancy was referred for colonoscopy to the endoscopy unit. She reported a change in stool color suggestive for melaena . Six months before, she had given birth to a healthy son. Laboratory results including CRP, hemoglobin, and serum creatinin were within normal ranges. She reported no abdominal pain or discomfort. During pregnancy at 26 weeks she was admitted to the hospital because of diffuse mild right-sided abdominal pain radiating to the back. Abdominal ultrasound revealed no evidence for gallbladder stones or other abnormalities (Figure 1). These complaints gradually subsided and therefore no additional abdominal imaging was performed. Unexpectedly, colonoscopy showed substantial varicosis of the ascending colon and caecum. Because of her previous complaints, recent pregnancy and colonic varices, portal hypertension was suspected and an abdominal computer tomography (CT) with intravenous contrast was ordered, which showed a longstanding thrombosis of the superior mescenteric, vein given the presence of collateral veins (Figure 2, arrow). The patient was refered to the outpatient vascular medicine clinic to rule out clotting disorders, which indeed were not identified. Multi-disciplinary consultation (vascular surgeon, internist, gastroenterologist) resulted in the decision not to start anti-coagulants. At this point, i.e. six months after her colonoscopy, her hemoglobin has remained stable, the diarrhea has subsided and there are no remaining abdominal complaints. 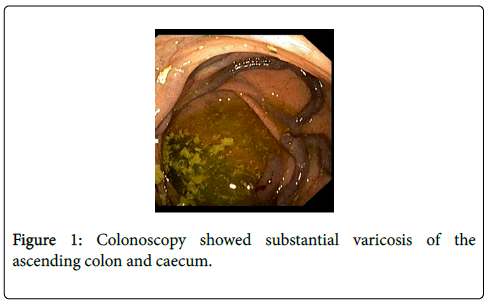 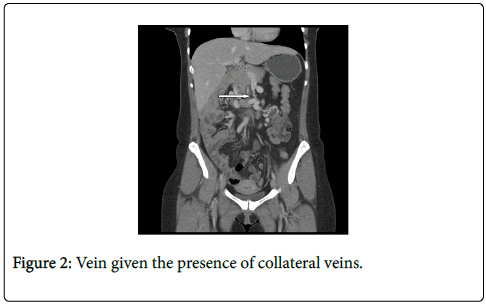 Figure 2: Vein given the presence of collateral veins.

A 58-year-old man with a history of an uncomplicated appendectomy was referred to our outpatient clinic because of melaena and anemia. Apart from fatigue the patient had no medical complaints and used no medication. Physical investigation revealed no abnormalities. Laboratory investigation showed a hemoglobin of 6,8mmol/l. Barium colonography showed no abnormalities. Gastroscopy revealed two submucosal varices in the cardia and post bulbular (Figure 3), without any sign of (recent) bleeding. Endoscopic ultrasound showed multiple collateral veins in the gastric, pancreatic and oesophageal area. Initially, the anemia resolved with a wait and see policy. However, within 2 months the patients presented with recurrent anemia and colonoscopy was performed, which showed major varices in the caecum and ascending colon (Figure 4). Otherwise, the colon and terminal ileum appeared normal Because of suspected portal hypertension, a CT-abdomen was performed, which showed thrombosis of the portal and splenic vein, with extensive collateral vein formation. Propanolol was started in order to reduce the portal pressure. However, the patient remained transfusion dependent (more than 3 units of packed cells per week) and therefore other options were discussed. Because continuous infusion of octreotide (50 mcg/hr) for 1 week initially seemed to decrease the blood loss, we embarked on a trial with the long-acting formulation was started (Octreotide LAR 30 mg/month), but without success. Due to the substantial portal occlusion a transjugular intrahepatic portosystemic shunt (TIPS) was considered technically challenging and eventually a mesocaval shunt was constructed (mesenteric- testicular vein anastomosis), which resulted in a significantly decreased erythrocyte transfusion rate (currently one unit per 2 to 3 weeks). Additional shunting of remaining collateral and abdominal wall veins will be considered in case of increased bleeding. 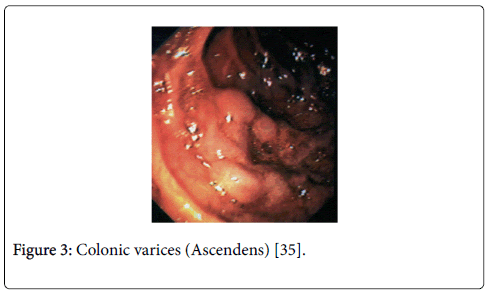 Colonic varices (CV) are part of the spectrum of portal colopathy, and, as one of our cases shows, anemia and bleeding in this entity can be quite profound. CV, which were first reported in 1954 [1], are a rare cause of lower gastrointestinal bleeding, with a reported incidence of 0.07% [2]. The most common sites for colonic varicosis are the rectum and cecum [3]. The etiology of CV can be classified mainly into two groups: Portal hypertension and Idiopathic (familial and non-familial).

Although approximately 90 cases of CV have been reported, mainly in bleeding patients with portal hypertension, the prevalence of (asymptomatic) CV is likely to be underestimated. In a study of 92 cirrhotic transplant candidates, portal hypertensive colopathy (PHC) and CV were found in respectively: 23.9% and 7.6% [6]. These findings were confirmed by an Italian study that reported 54% PHC and 31% CV in cirrhotic patients [7]. This study revealed no relation between the etiology/severity of cirrhosis and the presence of PHC/CV [7].

Portal hypertension (PH) can be classified in the following groups:

Most symptomatic cases of PH and CV present with either anemia or rectal blood loss. However, in our first case the patient presented with right abdominal pain and anemia. The only case-report that described abdominal pain (right lower quadrant) was in a patient with PH and CV based on superior mesenteric vein thrombosis [8], like in our case number 1. It is striking that in no other etiologies of PH and associated CV, abdominal pain is mentioned, like in our first case. One could speculate that pain in SMV thrombosis can arise from more acute and pronounced local ischemia and/or edema, than from other causes of PH.

The treatment of colonic varices is not well established because of scarcity of clinical trials and guidelines. Treatment is dictated by the underlying etiology, severity of the bleeding, as well as the distribution of the varices. In non-severe-cases of anemia a wait and see policy is most appropriate. In transfusion dependent patients, medical, local or surgical therapy is reported. Portal decompression is appropriate in patients with portal hypertension, and has included: beta blocker [18,23] somatostatin infusion/ octreotide [23,27], vascular stenting (TIPS and portal vein stenting) [12,17,19] and heparine [8]. Local control therapy included: catheter embolization [16,19], cyanoacrylate infusion [19,22], argon plasma coagulation [21], and ligation [11,20]. In case of splenic vein occlusion all reported cased advocated a splenectomy [13-15]. And, in uncontrollable cases (or pan-CV) a (partial) colectomy can be performed [9,11].

There is little evidence for an association between pregnancy and portal vein thrombosis [28]. However, in patients with right abdominal pain with or without rectal blood loss and especially in patients with clotting disorders, a pre-hepatic thrombosis of one of the portal tracts should be suspected and ruled out if no explanation of symptoms can be found. In our patient anemia and abdominal pain were mild to moderate, and improved within two weeks. Therefore, no additional investigations were performed, because these (CT-scan, colonoscopy) might possible harm the fetus. The second case of CV was also PHT induced. However, the clinical presentation was more pronounced and medical therapy failed. At that time a TIPS was considered to be technically challenging and surgical portal vein decompression resulted in a significant milder transfusion dependency. However, several large case series have confirmed the feasibility, safety and efficacy of TIPS for the treatment of non-tumoral PVT in liver cirrhosis [29-34]. The rate of technical success is high (75–100%) [29-34]. Once TIPS is successfully inserted, 87–100% of PVT patients can achieve portal vein recanalization [29-34]. Therefore, today, a TIPS most be considered in medical refractory patients with PHT and CV with acute/chronic anemia.

In conclusion, CV are a rare cause of gastrointestinal bleeding, and more prevalent in patients with liver cirrhosis. Especially in this group, rectal bleeding and anemia with normal upper GI investigations, should be investigated with a colonoscopy. On the other hand in asymptomatic patients with CV a PHT work-up and careful family anamnesis is recommended. Treatment of CV is not well established and depends on the etiology and severity of clinical presentation. In case of PHT related CV, a step up approach is proposed: 1. Medical PHT treatment Acute: octreotide, vasopressine, chronic: maintenance: aspecific beta-blockers (Nitrates?), 2. local treatment: Ligation, histoacryl, TIPS, catheter embolization, and 3. Surgery: total/partial colectomy, splenectomy.