Copyright: © 2016 Dubey P, et al. This is an open-access article distributed under the terms of the Creative Commons Attribution License, which permits unrestricted use, distribution, and reproduction in any medium, provided the original author and source are credited.

In this present study observed the effect of Nano filler (titanate coupling agent treated Nano-zirconia) on degradation behavior of PLA filled LLDPE/LDPE/MA-g-PE modified blend. Blown Films were exposed to UV light by using an accelerated weather meter (QUV). Results show that with the loading of Nano-zirconia in the LLDPE/LDPE/ PLA/MA-g-PE blend, tensile strength reduced to 47-54% before total rupture. Nano composite films lose weight by 4 to 6% in 144 hrs. However, without the addition of Nano filler, blends lose their weight only 0.76%. Thermal behavior of degraded Nano composite blown films was studied by using Differential Scanning Calorimetry (DSC) and Thermo Gravimeter Analyzer (TGA). The morphological changes were observed by the Scanning Electron Microscope (SEM). FTIR was used for change in functional group study.

It is difficult for polymers to be treated after use due to their resistance to the environment. When polymers are disposed of in a natural environment, they remain for a long time without degradation. It is frequently asserted by environmental pressure groups that the polyolefins can not biodegrade since the molecular weight must be less than 500 for this to occur. Due to low cost and good mechanical properties as compare to other commodity plastics polyethylene’s are world’s most extensively used commodity plastic of the 21st century [1-4]. Among the applications in all plastics, polyethylene consumption is 64% in packaging and bottles area [4]. In the packaging area, carry bags are regularly used product and are most visible [5]. For easy disposal of polymers naturally in an environment, photodegradable and biodegradable plastics in packaging materials are the best combination to decrease the accumulation of packaging waste in the environment [6]. Many authors reported that degradation rate of polyethylene is slow [7,8]. Biodegradable and photodegradable films may be the solution of visual pollution; these polymers broke into small pieces and reduce into low molecular weight. Natural photodegradation of polyolefin is a very slow process; however, many research papers have reported use of transition metals, which act as pro-oxidant. Addition of these pro-oxidants can promote the oxidation of polyolefin in the presence of oxygen and exposure to light/heat. Many pro-oxidant used with plastics include oxide or stearates of metals such as manganese iron, zinc, zirconium, cerium, titanium and cobalt [9-16].

In past few research articles the idea of increasing biodegradability achieved by adding natural biopolymer such as starch along with prooxidant in the presence of compatibilizer [17-19]. Further issues were raised regarding the toxicity of transition metals and accumulation of Nickel was inconsiderable [20]. Zirconium as a ceramic biomaterial and biocompatibility with polyethylene has been reported [21,22]. Earlier research papers report the enhanced mechanical, thermal and optical properties of films processed from the materials LLDPE /LDPE/ PLA/MA-g-PE and LLDPE/LDPE/PLA/MA-g-PE/nano zirconia blend [23,24]. The role of inorganic fillers on thermal, mechanical and degradation properties was also reported with many blends [17,18,25]. Several publications have been published on the effect of transition metals on photodegradation [9-11,14-16].

Nano zirconia filled and unfilled LLDPE/LDPE/ PLA/MA-g- PE blend blown films were tested using universal testing machine (INSTRON) used to test the tensile strength of the developed specimens. The tensile test was carried out according to ASTMD-882. The rectangular shaped samples had the dimensions 2.5 cm in width and 15 cm in length were tested. Tensile strength was calculated in machine direction. The average of 5 tested samples was reported in the present research paper.

LLDPE/LDPE/PLA/MA-g-PE blends modified with nanofillers blown films were tested on Differential Scanning Calorimetric (DSC), Perkin Elmer, which was used to find the thermal transitions in prepared blown film samples. DSC analysis was carried out from 50 to 200°C at heating rate of 10°C /min. The percentage of crystallinity was calculated from DSC result using the following relation. Hf for purely crystalline polyethylene is 276 J/g according to Da Costa and Ramos [26].

Surface morphology and compatibility of blends prepared from LLDPE/LDPE/PLA/MAgPE and its nanocomposites blown films were observed by using SEM Model ELU 430.

The Figures 1 and 2 illustrate the tensile strength and percentage elongation at break of the films. It is noted that the LLDPE/LDPE/ PLA/MA-g-PE and the LLDPE/LDPE/PLA/MA-g-PE/zirconia followed similar trends in the change in tensile properties over time. However, the degradation of tensile properties was 47% to 54% for the nanocomposites after 48 hrs before ruptured and for LLDPE/LDPE/ PLA/MA-g-PE blend was 50.2% after 144 hrs. And Tables 2 and 3 indicates that the presence of the nanofiller accelerates the degradation of the blend material, a fact that has also been observed in previous works [27,28]. The result also indicate that higher degradation rate was found in 1.5 phr containing nano zirconia (LnZ3) composite due to good dispersion in matrix. This effect can be explained in terms of the crystallinity increase observed by DSC, with the formation of new crystals. 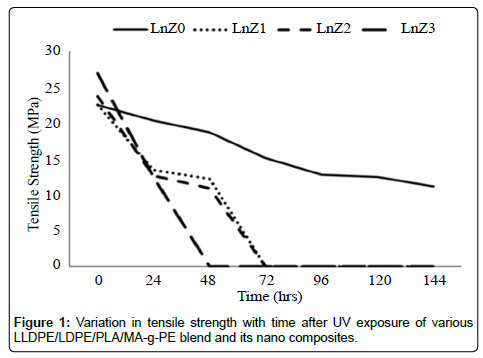 Figure 1: Variation in tensile strength with time after UV exposure of various LLDPE/LDPE/PLA/MA-g-PE blend and its nano composites. 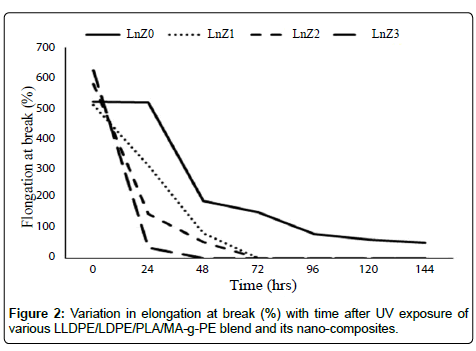 Figure 2: Variation in elongation at break (%) with time after UV exposure of various LLDPE/LDPE/PLA/MA-g-PE blend and its nano-composites.

Table 2: Change in tensile strength (MPa) of LLDPE/LDPE/PLA/MA-g-PE blend with nanozirconia before and after UV exposure at various time intervals.

Table 3: Change in elongation at break (%) of LLDPE/LDPE/PLA/MA-g-PE blend with nanozirconia before and after UV exposure at various time intervals.

The Differential Scanning Calorimetry (DSC) results for the UV Exposed and unexposed LLDPE/LDPE/PLA/MA-g-PE blend and their nanocomposites are described in Table 4 and Figure 3 for all the samples, crystallinity (a property that gives improving the stiffness and thermal stability of the material) increased after 96 hrs. Of UV exposure. The DSC analysis was carried out in order to study the various temperature transitions of the prepared nanocomposites. Endothermic curves of DSC scan gives information about melting temperature and degree of crystallinity. The DSC scans of samples containing zirconia oxide, for treated and untreated samples, are plotted in Figure 3 and the related data are summarized in Table 4 and Figure 3 showed that the melting temperatures of both pure samples and LnZ3 samples underwent reduction after 96 hours of UV exposure. However, samples containing prooxidant melting temperature (Tm) show higher reduction than without nanofiller samples after treatment. The reduction of Tm could be due to the breakdown of LLDPE/LDPE blend chains and molecular weight reduction. As reported by Colom et al. [29] the decrease of the decomposition and melting temperatures is associated with breaking of polymeric chains leads to lower thermal stability of the prepared films. The crystallinity of without nanofiller samples increased around 1%, from 10.8 to 11.4, whereas with nanofiller LnZ3 samples underwent higher increase, about 8%, from 21.74 to 29.7 after 96 hours of UV exposure (Table 4). The increase of crystallinity is probably due to increased nucleation in the amorphous regions. The chain scission allowed the small segments resulted to crystallize. The increase of crystallinity could contribute in degradation products which possessed the lower Tm than before UV exposed samples. Furthermore, the increase of crystallinity, particularly LnZ3 samples, gives supporting evidence on the role of zirconia nanofiller in accelerating degradation process on UV exposure.

Figure 3: DSC thermogram of LnZ0 and LnZ3 before and after 96 hrs. UV exposure.

Table 4: Melting temperature and crystallinity of samples before and after 96 hours of UV exposure.

The Figure 4 illustrates Comparison spectra of LLDPE/LDPE / PLA/MA-g-PE and LLDPE/LDPE /PLA/MA-g-PE/zirconia before and after UV exposure and characteristic peak (wave number) are given in Table 5. Chain broadening was observed in LnZ3 at 1190-1090 cm-1 (O-C=O stretching) and in LnZ0 chain broadening was not observed. Chain broadening was due to the presence of more than one oxidation product which can be clearly observed in Figure 4 after 96 hrs UV exposure. Change in intensities of zirconia containing nanocomposite shows noticeable change at 2901 cm-1 and 2915 cm-1 (C-H stretching), 1756-1744 cm-1 (Ester carbonyl group), 1460 cm-1 (CH2 bending), and 722 cm-1 (Skelton vibration of CH2) whereas without nanofiller blend in LnZ0 showed slight changes in intensities which reveals autoxidation of LLDPE/LDPE/PLA/MA-g-PE blend in presence of metal oxide.

Table 5: Segregation of individuals with use of TCD4+ lymphocytes at 350 TCD4+/μl level: FACSCan versus Dynabeads using study dyes.

The Figures 5A and 5B shows the image for the LLDPE/LDPE/ PLA/MA-g-PE (Figure 5a) and its nano-composite containing 1.5 phr zirconia (LnZ3) after 96 hrs UV exposure. The morphological changes observed in LLDPE/LDPE/PLA/MA-g-PE (LnZ0) and its nanocomposite after exposure to the UV light, and observed that number of voids together with extended cracks running in-between and around the dispersed particles in nanofiller filled blend (Figure 5b). The formation of a large number of voids and cracks in the nanocomposite suggests that LLDPE/ LDPE/PLA/MA-g-PE degradation begins at the interface between the polymer matrix and the nanofiller particles. As a result, we can assume that a well-dispersed filler, which results in an increased interface region between matrix and filler and enhances degradation. Physical and weight changes shown in Figures 6 and 7 and observed that samples were become brittle in nature and weight loss seen after the exposure of UV. With and without filler weight loss was 4% to 6.4%, 0.92% respectively after 144 hrs UV Exposure. 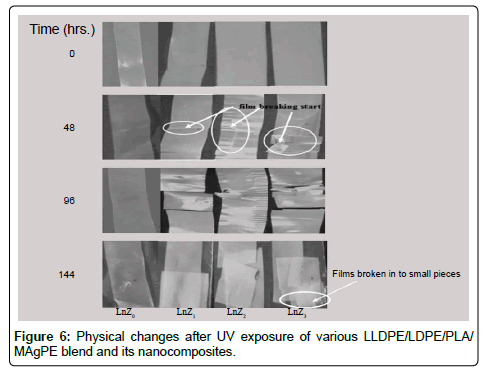 Figure 6: Physical changes after UV exposure of various LLDPE/LDPE/PLA/MAgPE blend and its nanocomposites. 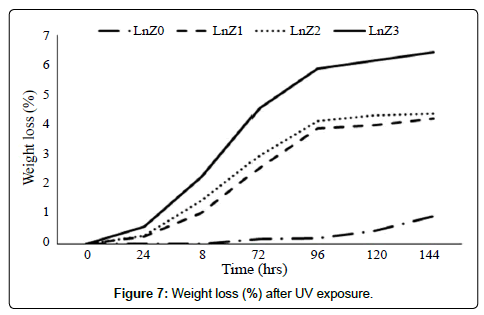 The influence of UV-irradiation on with and without nano zirconia filled LLDPE/LDPE/PLA/MA g PE blend blown films shows tremendous optimistic results. Which was supported by various techniques such as FTIR, SEM and DSC.

The following conclusions can be drawn from above experiments:

3. The FTIR spectra show changes in intensities, especially in the carbonyl (1756-1749 cm-1), 1190 -1090 cm-1 (O-C=O stretching) and bands at 721 cm-1 and 1461 cm-1 corresponding to vibrations of -CH2 groups and bending vibrations of -CH2 bonds respectively on UV exposure. The change in intensity of these peaks is a result of the fracture of the polyethylene chain after UV exposure.

The authors would like to acknowledge for FTIR analysis to Mr. Deepak Sharma from CDRI (Central Drug Research Institute), Lucknow, Uttar Pradesh, India. 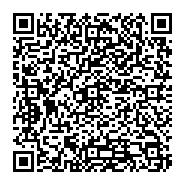