Witch weed (Striga gesnerioides) is a root parasitic weed of tobacco and cowpea in Sub- Saharan Africa. It is very difficult to control and host plant resistance is the most promising effective method affordable to small-scale farmers. This study was done to screen local tobacco genotypes for tolerance and resistance to Striga gesnerioides infection. Laboratory screening experiments were conducted during the 2016/17 season using fifteen local tobacco genotypes. The experiments were done using an Agar gel technique at the University of Zimbabwe, with treatments replicated four times in a Randomised Complete Block Design (RCBD). All tobacco genotypes significantly (p<0.05) stimulated the germination percentage and there were significant differences (p<0.05) in the germination distance of Striga seeds. The tobacco genotypes K RK66 and T74 had the closest Striga germination distance and the lowest germination percentages of Striga seeds, indicating their ability to produce low germination stimulants (strigolactones). This study revealed that all the tobacco genotypes were susceptible to Striga infection except the genotypes K RK66 and T74 which showed some level of tolerance and could be adopted by farmers in Striga infested areas. Additional evaluations, targeting the parental lines of the tolerant cultivars and is recommended as further studies.

Witch weed (Striga gesnerioides ) is one of the most devastating parasitic weed of broad-leaved crops in most parts of the world. It is an obligate root parasitic flowering weed that belongs to the Orobanchaceae family [1]. The germination of Striga is induced by strigolactones which are Striga germination stimulants found in root exudates of both host and non-host plants [2]. In Zimbabwe S. gesnerioides was reported on tobacco in the Mvuma and Chegutu growing areas, by both small and large-scale growers [3]. However, there is little information on tobacco leaf yield losses caused by this parasite although, 100% yield losses were reported in the Mvuma area under severe infestations [4]. Notably, the biotype of S. gesnerioides affecting tobacco in the Mvuma area did not affect cowpea, another known host of the parasitic weed. Striga gesnerioides is a problem on cowpea in African countries such as Nigeria, Kenya and Mali [5]. In Botswana, it was reported on sweet potato [6]. In cowpea yield losses resulting from S. gesnerioides infestations in the Northern Nigeria ranged from about 83 to 100%. For the control of S. gesnerioides , several strategies, including the use of nitrogen (N) fertilizer, host plant resistance, intercropping, crop rotation, suicidal germination in a trap crop system and herbicide control have been proposed [4,5]. However, for the control these measures have not been widely adopted by farmers in Zimbabwe, probably due to lack of resources, especially the smallholder farmers.

Host plant resistance is an effective and affordable option for the control of Striga . Cowpea varieties (B301, IT97K-499-35, IT84S-2049 and IT98K-205-8) have shown complete resistance to S. gesnerioides [5]. The commercial tobacco cultivars (K RK66, and K RK26) were reported to be tolerant to Striga under field trials in the Mvuma area compared to landraces [3]. The commercial tobacco varieties cultivated by farmers were not bred to be Striga resistant and were not evaluated for Striga resistance/tolerance. Currently, there is no breeding work being conducted at Kutsaga with the aim to improve tolerance to Striga . This research was thus targeted at identifying resistant/tolerant genotypes which can be used in breeding programmes and to elucidate their mechanisms of resistance to Striga .

The experiment was conducted in the Plant Pathology Laboratory of the Crop Science Department at the University of Zimbabwe. Fifteen local tobacco genotypes from the Tobacco Research Board were used in this experiment. These comprised of eight open release varieties (KM10, K RK22, K RK26, K RK28, K RK29, K RK60, K RK64, and K RK66) and seven limited release tobacco varieties (T70-T76). The experiment was laid out in a Randomized Complete Block Design (RCBD) with sixteen treatments (15 tobacco genotypes and water as a negative control) in two blocks. The treatments were replicated four times in each block.

Striga gesnerioides seeds that were collected from the infested fields of smallholder farmers in the Mvuma area were surface disinfested in order to destroy microbial contaminants. This was done by immersing the desired amount of Striga seeds in 1% sodium hypochlorite for two minutes. The floating seeds and chaff were discarded and the Striga seeds were washed with sterile water on a filter paper fitted in a funnel.

Striga seeds were preconditioned following the method [7] described by Berner et al. Surface disinfested S. gesnerioides seeds were placed in a sterile Petri dish with 30 ml of sterile water and stirred until they sunk. The Petri dish was covered with aluminium foil in order to exclude light and incubated at 28ºC for 14 days, changing water after every two days using a pipette.

The agar gel technique [8] was done following the procedure adapted from Reda et al. The surface disinfected Striga seeds were used in this technique. Host seeds were germinated by placing them on wet filter papers in petri dishes and incubating at room temperature for 14 days. Water agar was prepared by dissolving 6.8 g of bacto agar in 1000 ml of deionised water and the solution autoclaved at 120ºC for 20 minutes to eliminate microbial contaminants. The agar was allowed to cool for an hour before pouring. Fifty micro-millilitres (approximately 150 seeds) of conditioned S. gesnerioides seeds were pipetted into sterile petri dishes with a 9 cm diameter. Thirty millilitres of autoclaved water agar was poured over the Striga seeds allowing random distribution of the Striga seeds on the plate. One tobacco seedling was submerged in the solidifying agar near one edge of the plate with the root tip pointing across the plate. The plates were incubated in the dark at 28ºC for 48 hours 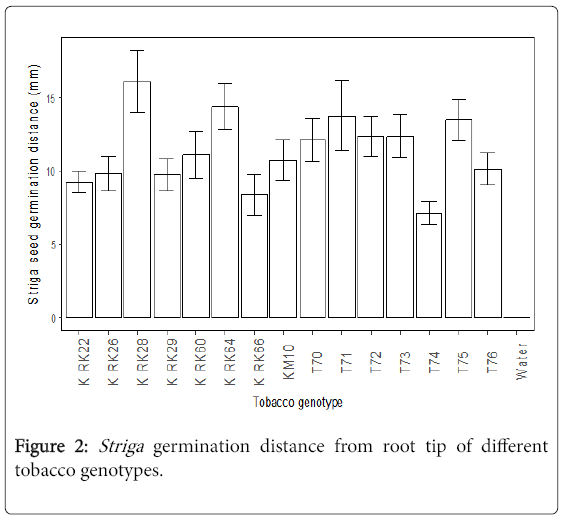 The results of the Agar gel assays revealed that the tobacco genotypes K RK28, T75 and K RK64 stimulated high Striga seed germination, suggesting that they produced high Striga germination stimulants [9,10]. These tobacco varieties are susceptible genotypes as they stimulate high germination of Striga seeds, thereby, increasing the chances of many Striga plants to be attached to the host roots. In previous laboratory screening trials K RK28 and K RK64 showed above 60% stimulation [3]. The tobacco cultivar K RK66 was associated with low Striga germination, suggesting low release of Striga germination stimulants [11]. The genotype was, thus, the most Striga tolerant of the tested varieties based on Striga seed germination and this confirmed previous observations under field conditions [3]. However, in the previous laboratory screening experiment, this tobacco cultivar was comparable with other cultivars evaluated in Striga germination studies [3]. The differences in outcome observed could be as a result of the fact that the age of the tobacco seedlings and the screening methods used in the two studies were different. Further laboratory studies are needed to investigate the germination of S. gesnerioides seeds stimulated by the host at different ages.

A high stimulation of Striga seed germination and a furthest germination distance of Striga seeds was associated with K RK28, suggesting the host produced high amounts of strigolactones [11]. This implies susceptibility to Striga infection since the host could stimulate Striga seeds that were located far away from the roots to germinate, potentially resulting in many Striga attachments. The least Striga germination distance was recorded from T74 and K RK66. Both stimulated low Striga seed germination suggesting low production of Striga germination stimulants. Tobacco genotypes with low germination stimulant (LGS) produce insufficient amounts of the exudates required for germination of conditioned Striga seeds. Genotypes producing low levels of germination stimulants were found to be resistant to Striga in field tests, and this low germination stimulant (LGS) trait was found to be inherited as a single, nuclear, recessive gene with largely addative gene action [2]. In studies done with sorghum, all highly susceptible genotypes were high producers of the germination stimulant. Most Striga seeds close to the growing tip of the tobacco seedling germinated better when compared to seeds that were close to the older part of the roots. This indicated that root exudation was active in the root tip of the tobacco seedling. This is in line with the report by Okonkwo [12] which states that smaller quantities of strigolactones are produced by the older root cells of the host plant.

The authors are thankful to the Tobacco Research Board for the provision of the genetic materials and the University of Zimbabwe for the laboratory facilities.

Copyright: © 2018 Koga C, et al. This is an open-access article distributed under the terms of the Creative Commons Attribution License, which permits unrestricted use, distribution, and reproduction in any medium, provided the original author and source are credited.