Sex Differences in Mental Health among 13-15 Year Old Adolescents in Iran and Finland: A Comparative Study

Copyright: © 2015 Björkqvist K, et al. This is an open-access article distributed under the terms of the Creative Commons Attribution License, which permits unrestricted use, distribution, and reproduction in any medium, provided the original author and source are credited.

The aim of the present study is to investigate sex differences in mental health problems and psychiatric symptoms in 13-15 year old adolescents in Iran and Finland. The general finding from studies conducted across nations and cultures appears to be that the adolescent period is more demanding for girls than for boys, with higher scores on mental health problems and lower scores on measures of well-being. A meta-analysis by Nolen-Hoeksma and Girgus [1] showed that from the age of 15 onwards, girls and women are twice as likely to be depressed as boys and men. But already from the age of 13, girls are more depressed and have a more negative body image than boys [2]. The fact that adolescent girls have more eating disorders than boys is well-established [3,4]. They also have lower selfesteem than boys [5].

In Finland, this sex difference in adolescent mental health is also clearly seen. In a representative study conducted in 2013, covering the whole nation, it was found that 79% of boys had no signs of anxiety at all, but the same was true for only 56% of girls. Girls also had higher scores of school-burnout, fatigue and somatic symptoms like headaches [6]. Whether this sex difference is cultural-specific or cultural-independent, depending on hormonal differences beginning at the onset of puberty, is still not established. A study comparing Iranian adolescents with adolescents from a Western nation may cast some light on this matter. Iranian culture is similar to Western in some respects, but different in others. For instance, dress codes for girls and women differ from Western ones; norms for behavior in communication between boys and girls differ as well and they attend sex-separated schools. The opportunities for girls to attend parks, sports, going to stadiums, ride a bicycle; all these are restricted. It is possible that the few opportunities for adolescent boys and girls to meet and communicate with each other puts less pressure on Iranian girls to look good, dress in accordance with the latest fashions and to be thin, than the case is for their Western counterparts.

The nationwide investigation of mental health among 35,014 Iranians by Noorbala, Bagheri, Yazdi, Yasamy and Mohammad [7], which was based on the General Health Questionnaire-28 [8], an indicator of psychiatric symptoms, included 11,448 adolescents and young adults, aged 15-24 years. It was found that about one-fifth of the sample (25.9% of women and 14.9% of men) experienced mental disorders, with women facing a higher risk of such disorders than men. The risk of mental disorders also increased with age. Depression and anxiety symptoms were more common than somatization and social dysfunction. There are studies investigating mental health problems among university students in Iran [9-16], but less research has focused on mental health issues during adolescence. Emami, Ghazinour and Rezaeishiraz [11] found relatively high mean scores of the brief version of the General Health Questionnaire, GHQ-12, in a sample of 4,599 adolescents from Teheran. Abedian, Mesbah and Peyravi [13] found in a study of 5,986 students of the Tehran University, also based on GHQ -12, that 83.6% of the students were mentally healthy, while 16.4% had psychological problems. Rostami and Bahranian [10] applied the GHQ-28 in a study of 2,367 students at the University of Tehran and found that 16.3% of the students had a high probability of mental disorders. Thus, the figures of the studies of both Abedian et al. and of Rostami and Bahrain provide very similar results, suggesting that roughly 16% of Teheran University students had psychological problems of the time of the studies. Izadnia, Amiri, Ghorban Jahromi and Hmidi [12] found that mental health issues play an important role in suicidal ideation among students of the Tehran University.

There may, however, be great variation between the frequencies of mental health problems among students of different Universities in Iran. Mokhtari, Farhang Dehghan, Aagari, Ghasembaklo, Mohamadyari, Azadmanesh and Akbari [16] applied GHQ-28 for a student population of 1,632 in West Azerbaijan, Iran and found that only 51.5% of the sample showed no signs of mental health problems, while as many as 48.5% had symptoms mental disorders. Zolfaghari, Fathi and Hashemi [14], in a study of students of the Payam-Noor University in Toyserkan, Iran, based on the SCL-90 questionnaire [15] found that as few as 29% of the students had no symptoms of mental health problems at all, while 64% showed at least some symptoms. There were no significant differences between female and male students. This study, however, used a different measure (SCL-90) than GHQ, which may partly explain these results. With regard to body dissatisfaction, there is evidence that it is a problem also in Iran. Garousi, Garrusi, Divsalar and Divsalar [15] found that about 2/3 of their student sample of 535 individuals showed moderate to severe body dissatisfaction and 40% of the students were using body management methods. Rhinoplasty and heavy exercise were the most frequent body management methods in women and men, respectively. Nobakht and Dezhkam [17] found a lifetime prevalence of 0.9% for anorexia nervosa, 3.2% for bulimia nervosa and 6.6% for a partial syndrome in 3,100 adolescent girls aged 15–18 in Iran. Body dissatisfaction and a desire to be thin were common in this sample. It should be noted that among young adolescents, 6 to 12 years of age, Tehrani-Doost, Shahrivar, Pakbaz, Rezaie and Ahmadi [18] found that Iranian girls actually had better scores of mental health than Iranian boys. Girls had significantly lower scores in attention problems, delinquent behavior, aggressive behavior, externalizing problems and total problems than boys. The aim of the present study is to compare factors of mental health among Iranian and Finnish adolescents of age 13 – 15 years of age. The dependent variables that will be examined are self-esteem, body satisfaction, somatic symptoms, hostility, anxiety, depression and eating problems. The main focus will be to what extent sex differences in regard to mental health will be distributed in a similar fashion in Iran and Finland; if so, it corroborates the notion that the sex differences usually found in Western nations may be universal and have a biological developmental-hormonal source. If not so, the commonly found sex differences in regard to mental health during adolescence may be more due to cultural differences than previously thought.

Data was collected by use of questionnaire, adapted from the Ostrobothnian Youth Survey (OYS) [18]. It addressed adolescent life in a specific region in Western Finland, Ostrobothnia and it consisted of a number of scales measuring behavior both at home and at school. In the present study, results based on the following scales and subscales will be presented: a 9-item version of the Rosenberg Self-Esteem Scale (RSES) [19]; three subscales from the Brief Symptom Inventory (BSI) [20], measuring anxiety, hostility and depression; a scale measuring body satisfaction, used in the OYS and a scale measuring somatic symptoms, also from the OYS [18]. The number items of each scale and sub-scale, as well as Cronbach’s α-values as a measure of reliability, are presented in Table 1. The questionnaire also included the SCOFF Eating Disorder Questionnaire [21]. This instrument is an index and not a scale, since it registers eating problems of various kinds, for instance eating too much as well as eating too little. Accordingly, it makes no sense to report α-value for the SCOFF index.

Table 1: Reliability scores for the scales of the study.

Data were collected at regular school lessons, with one of the researchers, or assistants, present. It took about one hour to fill in the questionnaire.

Ethical considerations: Data was collected under strict anonymity with the consent of school authorities and parents. As a whole, the study was conducted in accordance with required ethical standards by Åbo Akademi University.

A two-way multivariate analysis of variance (MANOVA) was conducted with country (Iran vs. Finland) and sex (boys vs. girls) as independent variables, age as covariate and the six scales (depression, anxiety, hostility, somatic symptoms, body satisfaction and selfesteem) and the eating problem index as dependent variables. The analysis revealed that the Iranian sample scored higher on all seven measures. This result appeared illogical, since five of them measured negative symptoms, while the two last ones (body satisfaction and selfesteem) measured positive characteristics. Rather than taking this finding at face value, the authors reasoned that it could be caused by some kind of response tendency towards “yea-saying” in the Iranian sample. It is an established fact that cultures may vary in terms of tendencies towards “yea-saying” and “nay-saying” [22,23].

Accordingly, it was decided to make the analysis on basis of standardized z-scores rather than on raw data. The data was standardized within each sample (separately for Iran and Finland), so the mean of both countries was 0 on every scale, with SD = ± 1.

Analysis of sex differences in regard to mental health in Iran and Finland.

A new two-way multivariate analysis of variance (MANOVA) was conducted with country (Iran vs. Finland) and sex (boys vs. girls) as independent variables and eating problems, depression, anxiety, hostility, somatic symptoms, body satisfaction and self-esteem as dependent variables. Age was kept as a covariate, since there was a significant age difference between the Iranian and the Finnish sample. The results are presented in Table 2 and Figure 1. 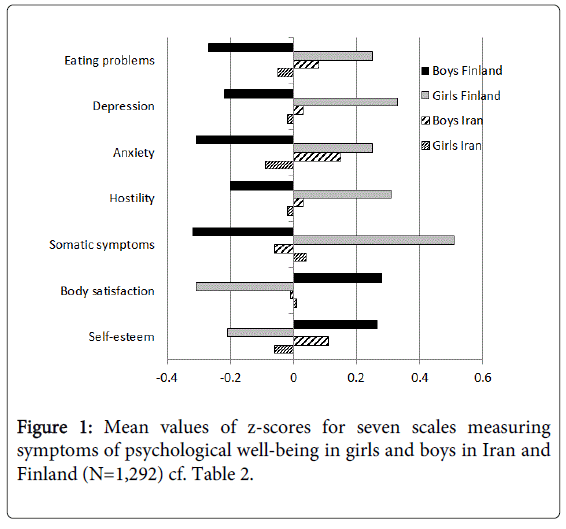 As Table 2 shows, age would have affected the results if not kept as a covariate. The effect of country is in this case meaningless due to the zscore transformation. With both samples aggregated, boys scored higher on self-esteem and body satisfaction, while girls scored higher on eating problems, depression, anxiety, hostility and somatic symptoms.

On basis of the present data, no conclusion may be drawn about whether the mental health of Iranian adolescents is better or worse than the mental health of Finnish adolescents. Rather, there was a tendency among the Iranian youth to be “yea-sayers”; that is, they tended to score higher than the Finnish youth on both positive and negative scales. Instead, the great discrepancy in sex differences between the two samples turned out to be the main finding of the study. In most studies on adolescent mental wellbeing conducted around the world, girls score worse on mental health measures than boys [1-6]. It is noteworthy that the major part of these studies has been conducted in Western societies. A sex difference in the expected direction was found in the Finnish sample, but not in the Iranian one. It should be noted that the age span was 13-15 years in both samples and the adolescents should all have passed the onset of puberty. Accordingly, this discrepancy cannot be explained by physical development, but variation due to culture must be at play. Obviously, there must be some factors in Iranian society which either delay the development of this sex difference, or possibly hinder it from developing. We know that dress codes for girls and women differ from Western ones; norms for behavior in communication between boys and girls differ as well and they attend sex-separated schools. The opportunities for girls to attend parks, sports, going to stadiums, ride a bicycle are all restricted. There are fewer opportunities for interaction between adolescent boys and girls to meet and communicate with each other than in the West, which puts less pressure on Iranian girls to dress in accordance with the latest fashions and to be thin.

However, the world is rapidly changing into a global culture, due to social media, television, etc. Also Iranian women increasingly feel the need to conform to Western ideals. In modern Iran, women do get to interact with others and social pressures are felt.