In the recent years, there has been a growing interest in developing alternative energy systems to fossil fuels. Hydrogen gas - a viable energy carrier for the future [1,2], is being used in fuel cells for generating electricity, with high efficiency. Hydrogen represents a promising fuel since it is considered as a clean energy carrier and also because during its combustion only water is emitted. As hydrogen can be produced from different kinds of renewable feedstocks, such as ethanol, therefore, hydrogen could be treated as biofuel. Chemical reactions involved in the production of hydrogen from ethanol are: steam reforming (SR), partial oxidation (POX), and autothermal reforming (ATR) [3]. Among a range of possible sources to generate hydrogen gas, the steam reforming of methane, covers about 50% of the world’s feedstock for hydrogen production [4]. Steam reforming of ethanol for producing hydrogen gas is a promising means since ethanol can readily be obtained through bio-mass fermentation. Further, besides being more safe and easier to handle, steam reforming of ethanol occurs at comparatively lower temperature compared to other fuels [5,6].

During reforming process of ethanol, besides, the main products: H2 and CO2, biproducts such as CO and CH4 are also formed [7-9]. The reaction pathway of ethanol steam reforming depends on the reaction conditions such as nature of catalyst and temperature which significantly affect the H2 production. The selection of a suitable catalyst plays a vital role in ethanol steam reforming reaction leading to H2 production [9]. Earlier, Batista et al. [10] studied steam reforming of ethanol using Co/ Al2O3 and Co/SiO2 catalysts with a cobalt content of 8 and 18% (w/w), respectively. The catalysts showed average conversion higher than 70% for the steam reforming of ethanol at 400°C. Cussins et al. [11] have reported that copper/nickel/Alumina composite catalyst can yield 1.3 moles hydrogen per mole ethanol reacted at 300°C and atmospheric pressure with excess water in the feed solution. Ciambelli et al. [12] investigated Catalytic activity, selectivity and stability of a Pt/CeO2 (5 wt% Pt) catalyst in the low temperature ethanol steam reforming reaction for hydrogen production and could achieve complete ethanol conversion at 300°C with negligible CO, Dan et al. [13] investigated effect of support modification on hydrogen production by ethanol steam reforming on nickel catalysts. They observed that the promotion of both alumina and zirconia with CeO2 and La2O3 lead to changes in the Ni - support interaction resulting in much better dispersion and stabilization of the Ni nanoparticles on the catalyst surface. For La2O3 promoted catalysts 100% ethanol conversion was obtained at temperatures as low as 300°C.

Veiga et al. [14] investigated production of H2-rich gaseous mixtures from steam reforming of crude glycerol on ternary Ni–La– Ti catalysts. Standard catalytic tests for the steam reforming of glycerol were performed at 500°C or 650°C by feeding the fixed-bed tubular reactor with a crude glycerol:water solution containing 30 wt% glycerol. Recently, Hakkel et al. [15] has presented a model system consisting of Ni particles grown onto epitaxial CeO2 films, deposited on CaF2-buffered Si(111), for molecular level study of the transformations of ethanol under steam reforming conditions. They have explored adsorption behaviour of ethanol and other stable compounds, important in ethanol reforming, by means of photoelectron spectroscopy.

It is believed that the use of composite transition metals catalysts, supported on a suitable metal oxide, can significantly inhibit undesirable ethanol dehydration and thus can enhance steam reforming of ethanol [7]. In the present study, we have used bimetallic Co-Cu/SiO2 composite catalysts of varying composition, for the steam reforming of ethanol. Effects of operational parameters such as: catalyst load, temperature, composition of active phase and water to ethanol molar ratio, have been investigated.

Schematic design of steam reforming reactor system in Figure 1. The reactor tube is made of steel (length: 25 cm and internal diameter 1.27 cm). Catalyst was loaded over a quartz wool kept over metal grating at the centre of the reactor tube. A tubular furnace made of clay (embedded with glass-wool) surrounding the reactor tube was designed to achieve temperature upto 600°C. 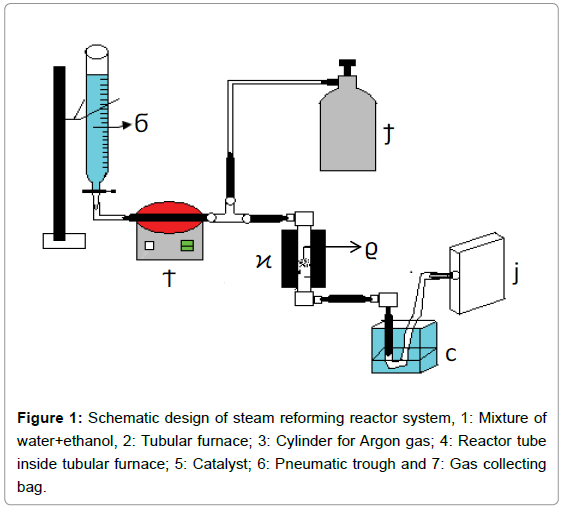 Preparation of catalysts: Silica (SiO2) based bimetallic Co- Cu composite catalysts were prepared by mixing the former with Co(NO3)2.6H2O and Cu (NO3)2.3H2O salts in desired proportions by impregnation method. Stoichiometric amounts of cobalt and copper salts were, separately, dissolved in de-ionized water. The two solutions of the precursor salts were thoroughly mixed and then appropriate amount of silica powder was added to it. The slurry was heated in an evaporating dish at 140°C for 12 hours. The dried composite catalyst was calcined at 550°C for 5 hours and the product was stored at room temperature in moisture-free atmosphere.

Evaluation of the catalytic performance: Composite catalyst (1.4 g) was loaded over a thin layer of quartz wool in the reactor tube (Figure 1). After the desired operational temperature was reached, argon gas was allowed to flush through the reactor tube for 5 minutes. Water+ethanol solution of desired molar ratio (3:1, 6:1 or 9:1) was allowed to enter at one ml/min into the evaporator tube kept at 200°C. Ethanol and water vapors, mixed with the argon gas at flow rate: 20 ml/min, were fed into the reactor tube at atmospheric pressure. The reaction was carried out over the temperature range: 300 to 600°C. The gaseous products were cooled down to room temperature and collected in gas sample bags. The gaseous samples were analyzed using Permselective Gas Sensor equipped with non-dispersive I.R. detector.

Physical state: As-synthesized composite catalysts were powders of different colors due to difference in molar ratio of their active phases. Whereas, pre-calcined SiO2-based Co-Cu composite catalysts, containing higher load of cobalt, had reddish color, the catalysts containing higher load of copper were bluish in color. Upon calcinations at 550°C, the catalysts turned grey in color. The grey color of catalyst further intensified and turned black upon increasing the cobalt load. 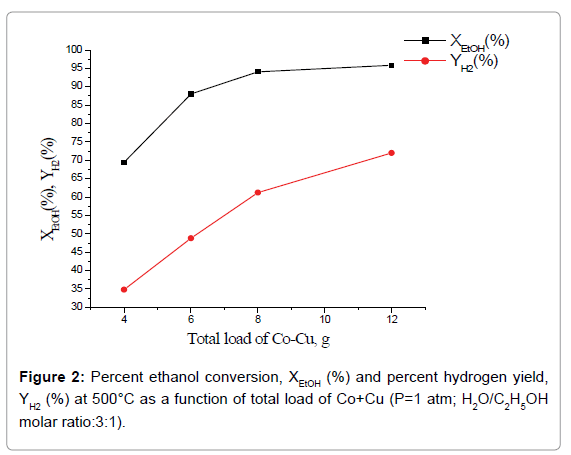 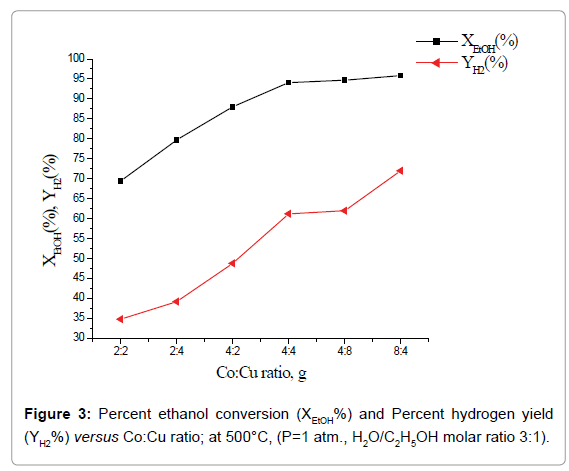 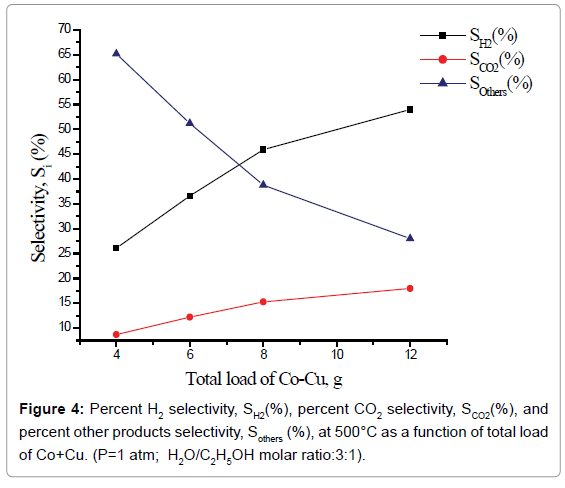 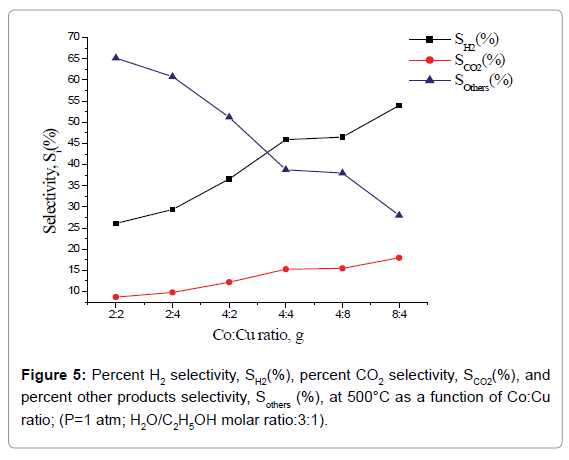 Effect of temperature on catalytic activity: Plots of percent ethanol conversion as a function of temperature at varying composition of catalyst are presented in Figure 6. Ethanol conversion increases with increase of temperature as well as the active catalyst concentration. It is obvious since the overall reaction involved in the ethanol reforming process is of endothermic in nature. The optimum temperature for ethanol conversion 500°C. At still higher temperature, 600°C, there was no further gain in percent ethanol conversion. Below 500°C, owing to the dehydrating nature of the support (Silica), ethanol preferably converts to ethane and water, resulting in the decrease of hydrogen production. Also, at low temperatures enough energy is not J Anal Bioanal Tech, an open access journal Volume 9 • Issue 3 • 1000406 ISSN: 2155-9872 available for the decomposition of ethanol- a prerequisite for hydrogen production. The sequence of chemical reactions involved in steam reforming process [16] is given below: 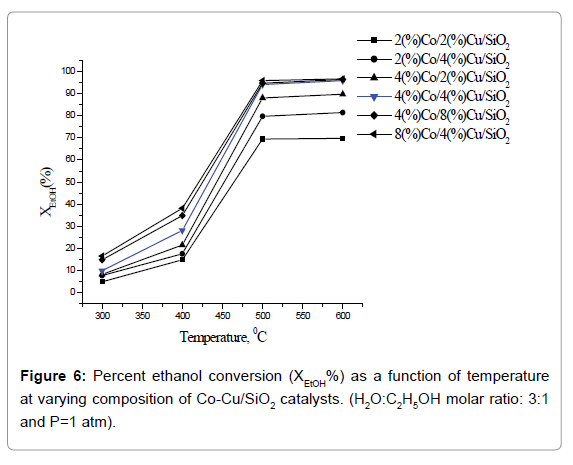 Effect of water:ethanol ratio: Percent hydrogen yield and % selectivity of hydrogen, carbon dioxide and other products over 8% Co/4% Cu/SiO2 composite catalyst at varying water:ethanol molar ratio, are exhibited in Figure 7. Percent yield as well as selectivity of H2 increases with the increase in water:ethanol ration. Whereas, percent selectivity of other products decreases the selectivity of CO2 is unaltered with the increase in H2O:C2H5OH ratio. These results conform with the works reported by Umegaki et al. [9] and Bergamaschi and Carvalho [17] who had used 20% Ni/SiO2, 5% Pd/In2O3 and 2% Cu/5% Ni/ ZrO2 catalysts, respectively, while studying ethanol steam-reforming process. Though a wide variety of base metals such as Ni, Cu, Co or noble metals like Rh, Pt and Ru, deposited on suitable support material, have been used by other workers as reviewed by Bineli et al. [3], yet no comparison could be made with them as the catalysts used in our work are different. 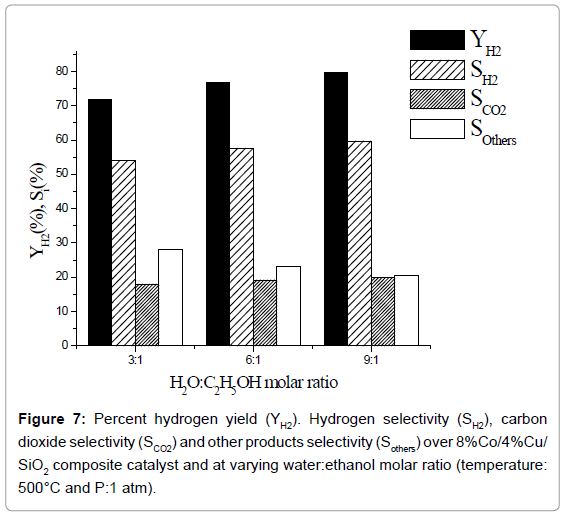 Activities of silica (SiO2) -supported Co-Cu composite catalysts, with varying composition, for the production of H2 gas, in the ethanol steam reforming process, have been studied. Effects of water:ethanol ratio, catalytic load, Co:Cu load ratio and temperature on ethanol conversion, hydrogen yield and reaction products selectivity have been investigated. Higher water:ethanol ratio, higher Co:Cu load ratio and higher temperature lead to enhanced ethanol conversion, more yield as well as selectivity of hydrogen gas. The catalyst having composition: 8% Co/4% Cu/SiO2 performed best with 97.15% ethanol conversion at optimum temperature 500°C and water ethanol ratio 9:1. No comparison could be made with the previously reported works as the catalysts used in our work were different from those reported by other workers.

Authors acknowledge the receipt of financial grant from Ministry of Education, Ethiopia, through Haramaya University, for carrying out this work.

Copyright: © 2018 Tekulu Z, et al. This is an open-access article distributed under the terms of the Creative Commons Attribution License, which permits unrestricted use, distribution, and reproduction in any medium, provided the original author and source are credited.