Copyright: © 2014 Palermo M, et al. This is an open-access article distributed under the terms of the Creative Commons Attribution License, which permits unrestricted use, distribution, and reproduction in any medium, provided the original author and source are credited.

Introduction: Since the first classic descriptions of surgical gastrostomies for feeding by supraumbilical medial incisions, patients were operated under general anesthesia, with prolonged time of surgery, these were patients in poor health status, undernourished due to inadequate intake or to neurological or tumor involvement, with prolonged hospitalization, both for the recovery of the intestinal motility as well as for the recovery of post-surgical wounds. Material and Methods: Between July 2012 and December 2013, 10 patients underwent a single port laparoscopic gastrostomy. Six were females and 4 males. The range of age was from 54 to 87 y/o with a mean age of 72. Results: The mean time of the procedure was 43 minutes. Nine patients underwent glucose intake tolerance test after 12 hours and one 24 hours later. Enteral feeding was indicated after the glucose intake tolerance. No complications related with the procedure were observed.f Discussion: Nowadays, the gold standard technique to perform a gastrostomy is the percutaneous approach. In patients with head and neck disorders when is not possible to insert a nasogastric tube to insuflate the stomach, a laparoscopic gastrostomy would be indicated. We describe a new technique, step by step, to perform less invasive laparoscopic surgery by a single port laparoscopic gastrostomy. Conclusion: The lumen created is the same than with open techniques but with a minimally invasive approach, that allows to start feeding earlier providing high quality feeding

In the XVIII century, John Hunter described for the first time the use of a gastric feeding tube, later, Physick used to carry out a gastric lavage, later on, Sedillot in France, during the middle of the XIX century, described the first surgical gastrostomy.

The first description of a technique to minimize the transparietal access for gastrostomies was by Harry Fenwick on the September 18th 1884 and published in the Annals of Surgery [1,2].

The gold standard technique to perform a gastrostomy is the percutaneous approach [3-5]. In patients with head and neck disorders when is not possible to insert a nasogastric tube to insuflate the stomach, a single port laparoscopic gastrostomy would be indicated [6] (Figure 1). Between July 2012 and December 2013, 10 patients underwent a single port laparoscopic gastrostomy. Six were females and 4 males. The range of age was from 54 to 87 y/o with a mean age of 72. All the patients had head and neck tumors with no possibility to get access to the stomach through a nasogastric tube. Reason why a percutaneous or endoscopic gastrostomy couldn’t be performed.

In patients with head and neck tumors, head and neck trauma or any other disorder which don’t allows the surgeon to pass through the esophagus and reach the stomach to insulate it and perform a percutaneous gastrostomy [gold standard].

A laparoscopic scope with working cannel, a 10 or 12 mm trocar, light source, optic fiber, pneumoperitoneum insuflator and a grasper.

The patient is placed in dorsal decubitus.

Asepsis and antisepsis are carried out from the inter mamillary line to the pubis. It is necessary to have the possibility of doing the case both laparoscopically or open. Sterile drapes are placed.

An incision is made, two finger´s breadth under the costal border [9th rib], from the left transrectus and as close as possible to Spiegel´s semilunar line [external attachment of rectus sheath]. It must be sufficient for a 10 mm trocar (Figures 2A-B and 3). 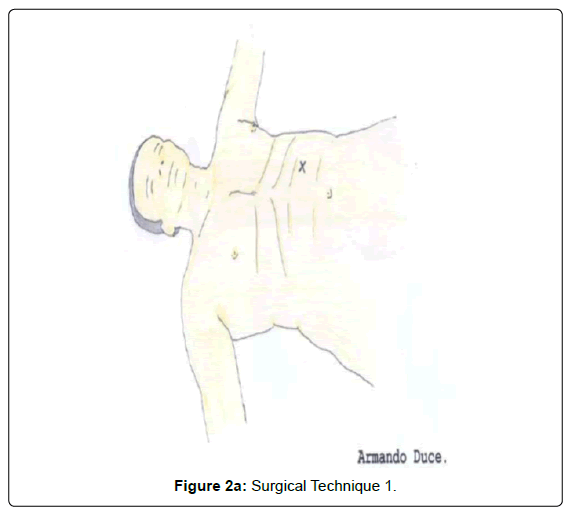 Placement of a 10 mm trocar, carbon dioxide insufflation at 12 mm hg pressure or less and 20 ml flow (Figures 4A and 4B). A 30 degree vision working channel optics is inserted (Figures 5A and 5B). 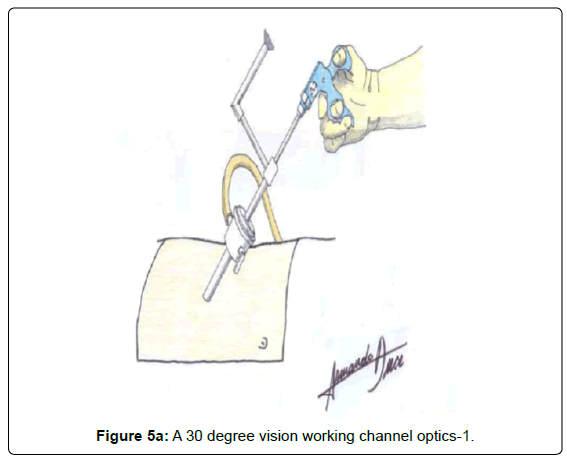 Another option is to insert the instruments parallel to the 10 mm trocar (Figures 5C). The left quadrant is inspected visualizing the left liver lobe, the distal esophagus, stomach and left colon under the subphrenic space.

A “grasper” is placed through the optics working cannel, mobilizing the anterior aspect of the stomach, by checking its mobility we choose the segment with the necessary mobility to avoid injury to the gastric vasculature by tension when pulling towards the abdominal wall (Figure 6). When exteriorizing the gastric segment, the pneumoperitoneum is lost and mobility and lack of tension are verified with a Foerster clamp (Figures 7A and 7B). 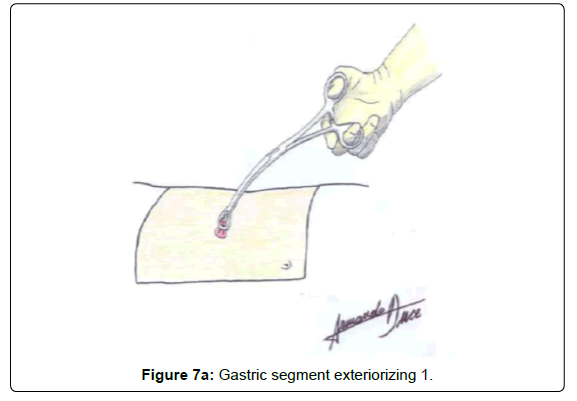 Figure 8: Aponeurosis of the rectus abdominus. Dextrose is instilled in a Boneau syringe, through a Pezzer tube and “clamped” to check passage of the fluid to the duodenum, absence of leaks and reflux when unclamping.

A Pezzer tube is fixated to the skin and cutaneous closure with non-continuous sutures, according to the orifice needed for the probe diameter (Figures 12A and 12B). Figure 12a: A Pezzer tube fixation to the skin and cutaneous. Figure 12b: A Pezzer tube fixation to the skin and cutaneous.

A glucose intake tolerance test is carried out after 12 hours, and enteral feeding is checked.

No complications related with the procedure were observed.

A high quality of feeding was significantly faster when comparing when others techniques, because the thickness of the tube is bigger in the single port laparoscopic gastrostomy.

Since, many variants have been described to place a tube in the lumen of the digestive tract for decompressing or feeding purposes [2].

They can be classified as follows in Table 1. Since the first classic descriptions of surgical gastrostomies for feeding or decompression purposes by supraumbilical medial incisions, patients were operated under general anesthesia, with prolonged time of surgery, these were patients in poor health status, undernourished due to inadequate intake or to neurological or tumor involvement, with prolonged hospitalization, both for the recovery of the intestinal motility as well as for the recovery of post-surgical wounds [7,8]. The issues of total recovery time to allow the patient an earlier return to normal activities, of the complications due to the procedure and the economic cost have urged to find a better surgical option to create new techniques to maintain feeding continuity in this group of patients, with unmet basic caloric requirements and no parenteral alternative.

The technique to introduce a tube orally, to insuflate the stomach and exteriorize it to construct a definite ostomy, as described by Hendrick, has evolved in time: radiology contributed with a new device with the introduction of the Seldinger technique for percutaneous gastrostomies improving surgery time, type of anesthesia, less invasion of the abdominal wall and abdominal organs, improving hospitalization stay and recovery, both inside and outside the hospital, reducing costs and constituting a simpler approach to be learnt and practiced by the community of surgeons [9-12]. The new techniques are not exempt of morbidity and mortality, but are significantly reduced.

The introduction of laparoscopy as a new technique was a turning point, as it allowed to explore the abdomen and operate with trocars, with the same advantages of minimally invasive techniques: it allowed to insuflate the stomach and displace it from the surgical field away from the abdominal wall to the colon, for this has been the cause of some complications in radiologically-guided percutaneous procedures. In this way, with the use of five trocars, which eventually became three, and of pneumoperitoneum and optic fiber, the surgical technique improved [13,14]. The advantage of the technique is that there is no need to pass through the aerodigestive tract to reach the stomach, since it is approached from the abdomen with direct visualization of the intra-abdominal organs.

An endoscopic gastrostomy is another possibility to reduce the number of incisions and use of pneumoperitoneum [8,15-17]. As this procedure requires patent passage to the stomach and uncontrolled gastrostomy fixation to the abdominal wall with no possibility to visualize interposing structures, it was necessary to devise hybrid laparoscopic endoscopies to minimize the number of ports utilized.

Under these circumstances, it was necessary to be very selective on the segment chosen for the ostomy which would allow a faster recovery after the gastrostomy in patients unable to progress through the upper digestive tract. Therefore, adhesions had to be minimized considering future intra-abdominal procedures, with the advantages of minimally invasive procedures such as less post-operative pain and faster recovery, thus enabling earlier feeding. Following all these parameters a single incision is done placing the trocar in a single working channel, under laparoscopic standards, with direct visualization, minimum pneumoperitoneum and completing the technique with a gastric fixation and ostomy from outside of the abdominal wall.

In the surgical armamentarium there are open, endoscopic, laparoscopic, percutaneous and combined procedures, but when considering minimally invasive procedures for shorter surgeries, there are patients who are unable to pass the esophagus and unable to undergo endoscopic or percutaneous procedures, but who need a rapid intervention with less abdominal involvement, in them open procedures are ruled out. The technique we herein introduce came about when thinking on the need to have a laparoscopic technique, with three trocars and shorter surgeries of approximately one hour and pneumoperitoneum.

Based on this information, we designed this procedure tailored to the patient´s needs according to the pathology, with a single left pararectus incision and placement of a single trocar and optics with working channel, with full vision to explore the abdominal cavity and look for metastases and eventually take selected biopsies under direct visualization of the gastric segment in which the gastrostomy shall be created. It is necessary to control the pressure on the abdominal wall by the final positioning and abdominal pneumoperitoneum time [approximately 15 minutes], gastric control during wall fixation and confirming that only one aspect of the stomach has been utilized for the gastrostomy considering future surgeries. Costs are low, specially hospitalization costs and rapid recovery from mini-invasive procedures, with minimal procedure related functional digestive disruption.

The main advantage of this technique is that feeding of the patient starts with the adequate lumen, something not achieved up front with other minimally invasive techniques. The lumen created is the same than with open techniques but with a minimally invasive approach. Therefore, the single incision laparoscopy prevents injury to the abdominal wall, with all the advantages of laparoscopic surgery, but, allows to start feeding earlier with a large lumen ostomy, providing high quality feeding without waiting months to achieve this lumen, as is the case with the other techniques.