Rosai-Dorfman disease is a rare proliferative histiocytic disorder of unknown etiology. It is a unique disorder of the lymph nodes but extranodal sites such as bone, skin, central nervous system, upper respiratory tract and soft tissue may be affected. Rosai-Dorfman disease is presented with massive, symmetrical cervical lymphadenopathy, fever, leucocytosis, elevated sedimantation rate and hipergamaglobulinemia. Soft tissue presentation can masquerading as a sarcoma. 61 year old women referred with painless left thigh mass to our hospital. After a excisional biopsy histopathologic results showed sheets of histiocytes with emperipolesis admixed in a mixture of inflammatuary cells including plasma cells and lymphocytes. Additionally, we observed pseudovascular spaces and asteroid bodies in large histiocytes. After surgery the patient has been followed up for 1 year postoperatively, without any sign of reccurence. We herein report a case of soft tissue Rosai-Dorfman disease wich presented with unusual features such as pseudovascular spaces and asteroid bodies in histiocytes.

Sinus histiocytosis with massive lymphadenopathy also known as Rosai-Dorfman disease (RDD) is a unique clinicopathologic disorder which usually presents as nodal disease. However extranodal sites such as bone, skin, pancreas, central nervous system, upper respiratory tract and soft tissue may be affected [1-6]. It was first described by Rosai and Dorfman in 1969 [7]. The disease presents with symmetric cervical lymhadenopathy, fever, leukocytosis, elevated sedimentation rate and hypergamaglobulinemia. Approximately 10% of all cases of RDD are associated with soft tissue involvement. But extranodal soft tissue RDD is a very rare benign entity. Histologically soft tissue RDD shows an inflammatory infiltrate rich in lymphocytes, plasma cells and sheets of large histiocytes with characteristic emperipolesis. Herein we described a soft tissue RDD with unusual features such as pseudovascular spaces and “asteroid bodies” in histiocytes.

61 year old women presented to our hospital with a 3 month history of painless left dorsal foot swelling with no significant laboratory abnormalities. Doppler ultrasonography of the left thigh disclosed an ill-defined soft tissue mass over the femoral vein. Magnetic resonance imaging revealed a 12 × 10 × 9 cm soft tissue mass over the femoral vein (Figure 1). The imaging appearance was nonspecific however a soft tissue sarcoma was considered as primary diagnosis. The tru-cut biopsy showed a histiocytic lesion and suggests an open biopsy for diagnosis. After excision of the mass the final diagnosis was extranodal RDD. 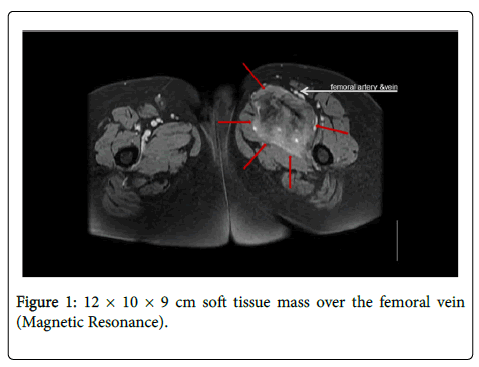 On gross examination the specimen weighed 960 gm. There was a well-defined yellow to tan mass in the deep subcutaneous tissue that measured 12 × 11 × 10 cm. The mass had a fleshy cut surface. The overlying skin was normal.

Microscopically the lesion showed a diffused infiltration with pseudovascular spaces of large histiocytes with large round vesicular nuclei and abundant eosinophilic to amphophilic cytoplasm (Figures 2a-2d). Some of the histiocytes had a typical foamy appearance which these often occured in clumbs, others were multinucleated and resembling Touton type giant cells. The histiocytes phagocytosed lymphocytes and other immune cells, which termed as emperipolesis (Figures 3a and 3b). Some multinucleated giant cells contained star shaped structures known as “asteroid bodies” (Figures 4a and 4b). In the background were additionally mixed inflammatory cells including plasma cells, lymphocytes and polymorphonuclear leukocytes. Spindle cell change, necrosis and mitotic figures were not obtained. The original observation was the lesion generally presented irregular branching pseudovascular spaces. These spaces were lined by a row of histiocytes identical to those seen in the surrounding stroma. Figure 4: (a, b) Cytoplasmic asteroid bodies in large histiocytes. (H and E).

The surgical material was fixed in formalin, paraffin embedded, and stained for Hematoxylin and Eosin. Immunohistochemically the cells expressed S100, CD68 and CD31 (Figures 5a and 5b). Immunohistochemical stains for CD1a, CD34, Actin, Desmin, Myo- D1, CK, and EMA were all negative. The patient has been followed up for 1 year postoperatively, without any sign of recurrence.

RDD is a rare idiopathic benign disease that usually presents as nodal disease [8]. However any organ may be affected including skin, central nervous system, upper respiratory system, pancreas, bones and soft tissue [1-6,9]. Nodal RDD are characterized with massive, painless bilateral lympadenopathy, fever, leukocytosis, elevated sedimentation rate and hyperglobulinemia. Whereas soft tissue RDD is a rapidly growing, solitary and nonreccurent trunk and proximal extremity subcutaneous lesion which is observed in middle aged females [10]. It is important to make a correct diagnosis because it can be supposed with sarcomas [11]. Soft tissue RDD is extremely rare. Foucar et al. reported only 3% out of 423 patients with RDD had soft tissue RDD [12].

The etiopathology is unknown but previous studies implicated the role of certain viruses such as HHV-6 and polyomavirus [10,13]. However, no infectious agent has been definitively linked to RDD. Recent studies suggest that several inflammatory molecules such as macrophage colony stimulating factor, IL-1, IL-6 and TNF-α play a role in the development of this disease [14]. Some authors suggested that a subset of RDD could overlap with IgG4-related Disease [15,16].

Macroscopically the tumor is tan-grey and soft. Histopathologically the tumor is characterized by numerous large histiocytes admixed with inflammatory cells including neutrophils, lymphocytes, plasma cells, foamy macrophages and rare eosinophils. Large histiocytes with emperipolesis are characteristic. Emperipolesis is a condition, wherein hematopoietic cells in living state are seen in the cytoplasm of host cell without any damage [17]. The histiocyte nuclei are round or oval in shape with abundant clear cytoplasm, either granular or finely vacuolated. Others are multinucleated and resembling Touton giant cells. Mitosis is rare. [18]. Spindling has been observed as a frequent finding, but we had spindling not obtained. This is consistent with Al- Daraji et al. [10,19]. Additionaly in this case report we demonstrated pseudovascular spaces which lined with histiocytes. This feature has not been described previously in the literature. The pseudosynovial or blood filled pseudoalveolar spaces are seen in diffuse type tenosynovial giant cell tumor. Our case is a soft tissue RDD and the pseudovascular spaces have been not described before in the English literature. Another interesting feature is “asteroid bodies” in histiocytes which has not seen in RDD previously. Electron microscopic studies revealed that asteroid bodies are phospholipid bilayers organized in lamellar and tubular forms [20]. Asteroid bodies are seen in sarcoidosis, silicone lympadenitis and amalgam reactions of the oral mucosa [21,22]. It seems to be a nonspecific but rare finding. This case report also highlights the presence of “asteroid bodies” in histiocytes for the first time in a case of RDD. The histiocytes stain positively for S100 and CD68. In contrast CD1a is negative. Additionally the histiocytes were CD31 positive in our case. CD31 may also be useful as a nonlysosomal marker of histiocytes [23].

In conclusion, soft tissue RDD is a very rare disorder. It is important to remember that soft tissue RDD can masquerading as a sarcoma. But characteristic histopathologic features help us to differentiate it from other entities. In this case we present the pseudovascular spaces in the lesion and “asteroid bodies” in histiocytes. To our best knowledge, these histopathologic features have not been described before. Case series and further work is needed to emphasize the importance of these findings.

The authors thank the technicians of the pathology laboratory division.

Copyright: ©2017 Canten T, et al. This is an open-access article distributed under the terms of the Creative Commons Attribution License, which permits unrestricted use, distribution, and reproduction in any medium, provided the original author and source are credited.