Copyright: © 2016 Elgohary H, et al. This is an open-access article distributed under the terms of the Creative Commons Attribution License, which permits unrestricted use, distribution, and reproduction in any medium, provided the original author and source are credited.

Objectives: The aim of the study was to compare between US guided versus Traditional palpation guided excision in Breast Conserving Surgery for palpable invasive ductal breast carcinoma regarding the volume of spared healthy breast tissue.

Patients and Methods: This prospective study was carried out on 40 consecutive female patients with early palpable invasive breast cancer. Patients are divided into two groups. Group A was treated by palpation guided excision. Group B was treated by ultrasound guided excision. The spared breast tissue assessment is done by calculation of the volume of excised specimen. Two methods used, by histopathological measurement of three dimensions of specimen and by fluid displacement method.

Conclusion: US is an effective guide for healthy tissue preservation with efficient one session resection of early breast tumours and that will augment the benefits gained after breast conserving surgery.

Breast surgery has undergone a long journey since William Halsted who introduced the radical mastectomy on 1882. This radical approach was still widely used till 1970. The concept of Halsted is considering breast cancer begins as a local disease and spreads in a contiguous manner away from the primary site through the lymphatic system. This proposal led to his emphasis on aggressive loco-regional control whatever tumour size or site to prevent further spread [2].

In 1969, WHO approved a randomized controlled trial comparing radical mastectomy and quadrentectomy. In 1973, patient recruitment according to age and stage had begun. These studies and subsequent studies declared that routine radical mastectomy may not always be the most appropriate surgical management [3,4].

Understanding the behaviour of cancer breast disease and its lymphatic spread make a great change in its management and the development of the concept of “Breast Conserving Surgery” which gained a wide acceptance as providing long term survival equal to that seen with mastectomy for early stage breast cancer [5-7].

The aim of breast conserving surgery (BCS) is to achieve local control of the disease and decrease local recurrence through tumour excision with free resection margin. On the other hand; to improve cosmetic outcome by preserving healthy breast tissue [8-10].

The American Society for Radiation Oncology (ASTRO) and the Society of Surgical Oncology (SSO) consensus guidelines on margin for BCS defined the positive margin as ink on invasive cancer or DCIS while negative margin is defined just as “No ink on tumour”. Provided that whole breast irradiation is not dependent on margin width, wider margin don’t significantly lower risk even if patient doesn’t receive systemic therapy or young age or the tumour has extensive intra-ductal component. As long as no ink on tumour, no evidence suggesting that wider margin can nullify intra breast tumour recurrence (IBTR) [11,12].

This prospective study was conducted at general surgery department, Benha University Hospital after obtaining approval from local ethical committee and after fully informed written consent signed by patient. This study was carried out since April 2013 to October 2015 to allow a minimum follow up period of at least 6 months for the last case operated upon. 40 consecutive female patients with early palpable invasive breast cancer were recruited for this study. All cases were presented with unilateral solitary breast mass. Patients were chosen for the study if they have biopsy proven invasive ductal carcinoma of the breast, stage T1 or T2. Mean age at presentation was 45.3 ± 8 years (27-62 years). To achieve a spared healthy breast tissue, the tumour resection margin must be free. The cases showed positive resection margin on histopathological examination were undergone re-surgery and excluded from this study. Patients are divided into two groups. Both groups are treated according to parameters of breast conserving surgery. Group A was treated by traditional palpation guided excision. Group B was treated by ultrasound guided excision.

All patients had preoperative antibiotic injection. Patient positioned in supine position. Affected breast is positioned to make the mass more prominent. Surgery will be performed under general anaesthesia. Surgery of the breast is performed before axillary procedure.

The aim of surgery in both groups will be to excise a rim of 1 cm of healthy adjacent breast tissue around the palpable breast lesion. After completion of the excision, specimen was oriented by sutures placed by the surgeon to help in cases which require re-excision. Also after completing lumpectomy, meticulous haemostasis is done, drains will not be used and titanium clips will be placed in each quadrant to guide radiotherapy. Subcutaneous tissue will be closed with absorbable stitches Vicryl 3/0, and the skin will be closed with stitches or staples. In both groups, assessment of the amount of healthy breast tissue spared is done by calculating the volume of resected breast tissue. A large volume of resected breast tissue indicates smaller amount of healthy breast tissue spared and vice versa. The volume of the specimen will be measured by two methods: by measurements of the three dimensions (a,b,c) of the specimen through histopathological examination and by fluid displacement where the specimen will be submerged in a flask filled with saline, the volume of fluid displaced equals the volume of the specimen. The cases with tumour involved margins in histo-pathological reports will be excluded from the study.

In the PG group, the index finger will be used to palpate the mass, retract it and guide the dissection. In this technique, adequate resection is based on the experience of the surgeon without objective imaging during surgery.

In the USG group, experienced radiologist will be present in the operating theatre and will carry out a preoperative US for localization of lesion before skin incision. USG will be performed using a 12 MHz US probe. The probe is coupled to a mobile US unit and covered with a sterile sheath (sterile gloves) that enables it to be used in the surgical wound. This US will determine the lump diameters and volume and its distance from skin and pectoral fascia. Skin incision is planned according to US imaging. An initial transverse image was obtained and the lesion was centred on the ultrasound screen. A sterile skin marker was then used to mark the lesion along the transverse axis. The process was repeated in the cranial-caudal plane (Figures 1A-E). After the incision, skin flaps are created over the lesion and the US probe will be positioned in the wound to reassess the position of the lesion (Figure 2). Also, the index finger will be used to palpate the mass, retract it and guide the dissection. Dissection is continued posteriorly in the plane between the breast and the pectoral fascia. To achieve adequate margins, US will be applied repeatedly in the wound from different angles (Figures 3A-D). Subsequently, a spherical lump of breast tissue will be excised with the desired 1cm margins of surrounding breast tissue. If the tumour location did not permit a clear 1 cm deep margin, pectoral is major fascia was taken. The wound bed is examined by ultrasound for residual lesion (Figures 4A and B). The excised specimen was examined by ultrasound with transverse and sagittal images obtained (Figures 5 and 6). If the margin appeared less than the 1cm desired margin, additional breast tissue was resected in that direction and separately sent for histo-pathological evaluation. The volume of re-excised specimen will be calculated separately and subsequently added to the originally excised specimen. 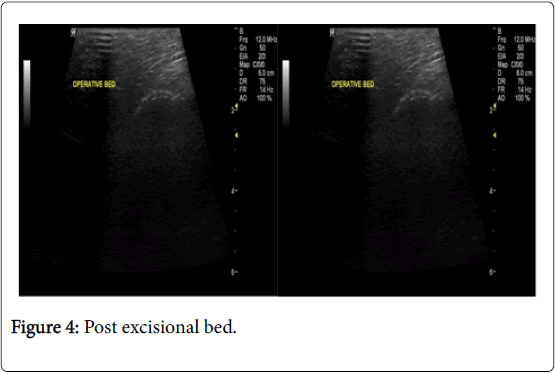 The obtained data were presented as mean ± SD, ranges, numbers and ratios. The collected data were tabulated and analyzed using t-test and Chi-square test. Statistical analysis was conducted using the SPSS (Version 16) for Windows statistical package. Values of P<0.05 were considered significant.

Regarding the size of tumour mass, calculation of volume was done according to the formula of a sphere or ellipsoid volume Figures 7-9, Table 6, Our plan was to excise the mass plus one centimeter margin, this new volume is equal to the desired optimal resected volume (V2) (Table 7). 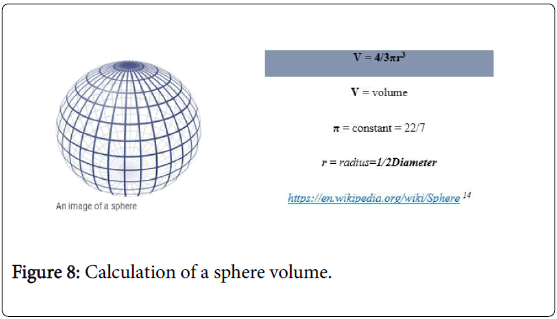 Figure 8: Calculation of a sphere volume.

Figure 9: Calculation of an ellipsoid volume.

The actual volume of excised specimen “the actual resected volume” is assessed by another 2 methods; fluid displacement method (Figure 7A and B) and from histopathological reports.

A significant difference (P<0.05) in actual resected volumes in both groups as calculated according to macroscopic measurements of histopathological reports Table 8 or according to fluid displacement (Table 9).

Margin status is assessed by histopathological examination. Three cases with ink on tumour were detected in group A patients and they had redo operation “modified radical mastectomy and excluded from the study. While all cases in group B are with free margin “no ink on tumour”. All cases in both groups showed no recurrence during the follow up period. There were no significant difference regarding the cost between ultrasound guided and palpation guided excision as the ultrasound is already available in the operation theatre with no additional costs.

Breast conservative surgery is established as the gold standard for localized tumours [14]. The aim of BCS is to preserve healthy breast tissue after efficient excision of malignant tissues and minimizing the revision surgery [14,15].

Emphasized that if initial excision margin is positive, significant proportion of patients could be predicted to have non trivial residual tumour [16].

In US guided excision of breast tumour, we have the facility of intraoperative radiological assessment of margin status and same session re-excision in cases with positive margin. While in palpation guided excision, the margin status is only declared after final pathological report which necessitates redo second set operation if margin is positive, and this will end with more morbidity and cost.

Breast density is another factor which may give a false impression about the actual size of breast mass with subsequent more tissue excision if palpation is the only guide for resection. So, the palpation guided resected specimen usually is irregular with points with wide margin (more than 1 cm) while other points with narrow or even breached margin. On the other hand, US guided excision is mostly spherical with regular margin.

The volume of resected breast tissue is the major determinant for cosmetic outcomes. In this study, volume of excised specimen as calculated by macroscopic measurements is 137.3 ± 9 cm3 in palpation guided group while in US guided group the specimen volume is 93 ± 5 cm3. This shows the significant reduction in tissue resection with subsequent healthy tissue preservation. In Marcia et al, the specimen volume was 114 ± 5.6 cm3 in PGG and 104 ± 8 cm3 in USG. These findings were non-significant but when they compare between 2 methods in dense breast patients they found a significant change in specimen volume. It was 127 ± 12.3 cm3 in USG and 180 ± 42.1 cm3 in PGG [15].

This study showed that US is an effective guide for healthy tissue preservation with efficient one session resection of early breast tumours and that will augment the benefits gained after breast conserving surgery. Intraoperative ultrasonography contributes to improved cosmetic outcomes by guiding for safe resection of smaller volumes of breast tissue resulting in larger sparing of healthy breast tissue.