Structural and Physical Properties of Biofield Treated Thymol and Menthol

Thymol is a volatile organic compound extracted from thyme and it has excellent antibacterial properties. Thymol is able to inhibit growth of gram positive microbes such as Bacillus subtilis, Escherichia coli, Klebsiella pneumonia, and Staphylococcus aureus [1]. From last few decades essential oils obtained from herbal products have attracted significant attention as an alternative strategy to replace antibiotic growth promoters. Additionally, thymol has been used in medical [2], food [3-7], agriculture [8], veterinarian and pest control applications [9]. Based on recent report, from Word Health Organization, thymol residues can be used in food without danger to the consumer as long as they do not exceed 50 mg/kg and thymol is generally recognized as safe by many national authorities [10]. Researchers have shown that thymol like other phenolic compounds is hydrophobic in nature and it is likely to dissolve in hydrophobic layer of cytoplasmic membrane of bacterial cells, between the lipid acyl chains, thus changing the fluidity and permeability of cell membranes [11]. Based on this excellent property, many research studies showed an additively and synergism of essential oils in combination with antibiotics, indicating that they may offer possibilities of reducing the antibiotic use [12,13]. However, it has certain disadvantages such as low water solubility and low palatability due to its unpleasant taste and smell [14].

Menthol is cyclic monoterpene alcohol, which is found as a main constituent in essential oil of Mentha candadensis L. (corn mint) and Mentha x piperita vulgaris L. (black peppermint) [15]. Menthol along with menthone, isomenthone and other compounds imparts the cooling minty taste and smell to plants, especially to members of the Mentha genus. Menthol has been included as an ingredient in various consumer products such as pharmaceuticals, cosmetic, pesticide, candies, chewing gums, and other applications [16,17]. Additionally, menthol is known to exhibits antimicrobial, anticancer, and antiinflammatory activities [18].

Bioelectromagnetism is an area which studies the interaction of living biological cells and electromagnetic fields. Researchers have demonstrated that short lived electrical current or action potential exists in several mammalian cells such as neurons, endocrine cells and muscle cells as well as some plant cells [19]. A physicist, William Tiller proposed the existence of a new force related to human body, in addition to four well known fundamental forces of physics: gravitational force, strong force, weak force, and electromagnetic force. After that biophysicist Fritz-Albert Popp et al. proposed that human physiology shows a high degree of order and stability due to their coherent dynamic states [20-22]. This emits the electromagnetic waves in form of bio-photons, which surrounds the human body and known as biofield energy. Therefore, the biofield consisting of electromagnetic field, generated by moving electrically charged particles (ions, cell, molecule etc.) inside the human body. It is the scientifically preferred term for the biologically produced electromagnetic and subtle energy field that provides regulatory and communication functions within the organism. In spite of countless study reports of the effectiveness of biofield therapies [23], there are very few well controlled experimental studies reported in literature [24].

Thus, human has the ability to harness the energy from environment or universe and can transmit into any leaving or nonliving objects around the globe. The objects always receive the energy and responding into useful way that is called biofield energy and the process is known as biofield treatment. Mr. Mahendra Trivedi is known to transform the characteristics of both living and nonliving materials using his biofield energy. The biofield treatment was used to modify the physical, atomic and thermal properties of various ceramic and metals [25-28]. In agriculture, the biofield treated crops have been reported for significant growth, characteristics and yield of plants [29-31]. Moreover, the biofield has resulted into altered antimicrobials susceptibility patterns and the biochemical characteristics of the microbes [32-34]. The growth and anatomical characteristic of some herbs were also changed after biofield treatment [35,36].

By considering the above mentioned facts and literature on biofield treatment, the present work was undertaken to see the influence of biofield energy on physical and structural properties of thymol and menthol.

Thymol and menthol were procured from S D Fine Chemicals Limited, India. The each sample was divided into two parts; one was kept as a control sample, while the other was subjected to Mr. Trivedi’s biofield treatment and coded as treated sample. The treatment group (T1) was in sealed pack and handed over to Mr. Trivedi for biofield treatment under laboratory condition. Mr. Trivedi provided the treatment through his energy transmission process to the treated group without touching the sample. After that, all the samples (control and treated) were characterized with respect to XRD, DSC, TGA, and FTIR analysis.

X-ray diffraction (XRD) study: XRD of thymol and menthol (control and treated) powders were analyzed using Philips Holland PW 1710 X-ray diffractometer system. The wavelength of the radiation used in XRD was 1.54056 angstrom. The data was obtained in the form of 2θ versus intensity (a.u) chart. The crystallite size was calculated based on the intense crystalline plane obtained from XRD graph. The obtained data was used to calculate the crystallite size using the following formula:

Where λ is the wavelength and k is the equipment constant (0.94).

Differential scanning calorimetry (DSC) study: The thymol and menthol (control and treated) powders were analyzed using a Pyris-6 Perkin Elmer DSC on a heating rate of 10°C/min under air atmosphere.

Thermogravimetric analysis (TGA): Thermal stability of thymol and menthol (control and treated) were analyzed using Metller, Toledo simultaneous TGA and differential thermal analyzer (DTA). The samples were heated from room temperature to 400°C with a heating rate of 5°C/min under air atmosphere.

Fourier transform infrared (FT-IR) spectroscopy: The infrared spectra of thymol and menthol (control and treated) were recorded on FT-IR spectrometer, (SHIMADZU, Japan). The FT-IR spectrum was recorded in the range of 4000-500 cm-1.

Figure 1: XRD diffractogram of thymol (a) control; (b) treated.

Figure 2: XRD diffractogram of menthol (a) control; (b) treated.

DSC thermogram of control and treated thymol are presented in Figure 3, where, a and b represented to control and treated sample, respectively. The thermogram of control thymol showed the endothermic peak at 148°C which could be due to oxidation of the compound (Figure 3a). DSC thermogram showed another endothermic peak at 125°C that could be due to oxidation of the treated sample (Figure 3b).

Figure 3: DSC thermogram of thymol (a) control; (b) treated.

Figure 4a and 4b shows the DSC thermogram of control and treated menthol crystals, respectively. The typical DSC thermogram of control menthol exhibited a melting endothermic transition temperature at 44°C which was similar to previously reported melting temperature of menthol [43]. Another endothermic peak was observed in control menthol at 138°C which was possibly due to thermal oxidation of the sample (Figure 4a). Whereas the biofield treated menthol showed a melting peak at 45°C which showed increase in melting temperature as compared to control (Figure 4b). It showed that biofield treatment may induced symmetrical or regular arrangement in the menthol crystals. Though the DSC thermogram of treated menthol showed lower thermal oxidation temperature, 107°C as compared to control sample. The enthalpy (ΔH; J/g) was computed from corresponding DSC thermograms of control and treated organic compounds and depicted in Table 2 (thymol and menthol). The control thymol showed the ΔH; 183.53 J/g however the treated sample showed decrease in ΔH; 167.49 J/g. However, the control menthol showed the ΔH; 279.84 J/g though decreased ΔH; 145.46 J/g was observed in treated sample. The percentage change in ΔH of treated thymol and menthol was 8.74% and 48.02%, respectively. The marked decrease in ΔH of treated thymol and menthol as compared to control might be due to the high energy state of biofield treated samples.

Figure 4: DSC thermogram of menthol (a) control; (b) treated. 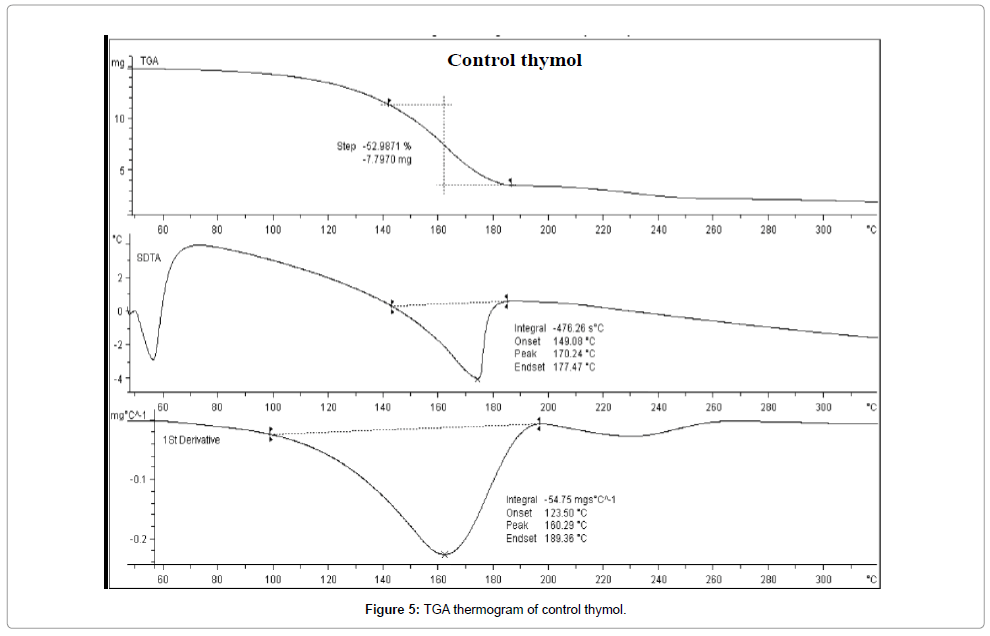 Figures 11 and 12 shows the FT-IR spectrum of the control and treated menthol, repectively. The FT-IR of control menthol an cyclic monoterpene showed streatching vibration peaks at 3201-3281 cm-1 which was due to –OH/phenolic group. The stretching vibration peaks of methyl groups was evident (Figure 11) at 2908, 2953 cm-1 and the isopropyl group stretching vibration was observed at 1367 cm-1. All these peaks confirmed the structure of the control menthol [45]. The FT-IR spectrum of treated menthol showed (Figure 12) occurance of these above mentioned IR stretching vibration peaks however, it also showed an increase in intensity of the methyl (-CH3) group stretching and the peaks were obsorved at 2870, 2910, 2933 and 2953 cm-1. The FT-IR spectrum also showed emergence of new peaks between 3200-3600 cm-1 which was possibly due to hydrogen bonded –OH group stretching in the treated menthol. Hence, it is postulated that emergence of these new peaks might be due to biofield treatment which induced hydrogen bonding in the treated monoterpene. This study evaluated the impact of biofield treatment on structural, crystalline and thermal properties of two monoterpenes (thymol and menthol). XRD analysis revealed that biofield treatment has increased in crystallite size of treated thymol as compared to control. However, treated menthol showed no significant change in crystal size. Moreover, biofield has induced structural and thermal changes in the treated thymol and menthol. The high crystallite size and good thermal stability of thymol may substantially increase the rate of reaction and it could improve the reaction yield during synthesis of pharmaceutical compounds. It could be used as novel, cost effective and efficient approach to modulate the physicochemical properties of these compounds. Based on the obtained results it is presumed that the biofield treated monoterpenes (thymol and menthol) could be used as antimicrobial agents for pharmaceutical applications.

The authors would like to thank all the laboratory staff of MGV Pharmacy College, Nashik for their assistance during the various instrument characterizations. We thank Dr. Cheng Dong of NLSC, institute of physics, and Chinese academy of sciences for permitting us to use Powder X software for analyzing XRD results.