Study on Antioxidant Activity of Typhonium giganteum Engl. Tuber Extracts in vitro and in vivo

Copyright: © 2013 Song Y, et al. This is an open-access article distributed under the terms of the Creative Commons Attribution License, which permits unrestricted use, distribution, and reproduction in any medium, provided the original author and source are credited.

Typhonium giganteum Engl. belongs to the family Araceae, which is a Chinese endemic plant. The dried root tuber of which has been used as a Chinese traditional medicine (Baifuzi) recorded in Chinese Pharmacopoeia [1]. Typhonium giganteum Engl. has many chemical constituents including glycosides, amino acids, proteins, sterols, sugars, flavonoids, trace elements and other substances [2-8]. Its rich constituents determine its pharmacological effects such as antibacterial, anti-inflammatory and anti-cancer etc [9-11]. With the development of herbal drugs bioactivity mechanism research, it was discovered that the efficacy of herbal medicine is closely related to its antioxidant effects. In this study, the antioxidant activity of Typhonium giganteum Engl. tuber extracts in vitro and in vivo is mainly discussed.

Accurately weighted 1.97 g DPPH, dissolved in methanol and in 10 mL volumetric flask, DPPH concentration was 0.5 mmoL/mL, which was stored at 4°C and protected from light. 0.5 ml of 0.5 mmoL/mL DPPH solution and 2 mL of 1 mg/mL AEoTGE, EEoTGE or Vitamin C solution were mixed and rest for 30 min at 37°C, the absorbance of solution was measured at 510 nm and the value was recorded as Ai. When using methanol instead of extract, the measured absorbance values were recorded as A0. When using methanol instead of DHHP, the measured absorbance values were recorded as Aj. Then the scavenging rate (%) of sample could be expressed as:

Fifty female Kunming mice were divided into five groups randomly (10 mice/group), including I: negative control group; II: AEoTGE group (1.0 g/kg); III: EEoTGE group (1.0 g/kg); IV: positive control group (Vitamin C, 1.0 g/kg); V: modle group (D-galactose, 1.0 g/ kg). All the Kunming mice were adapted in animal room for 1week before they were administration. Modle group, positive control group, AEoTGE group and EEoTGE group were injected of D-galactose, 1.0 g/ kg on the nape for 42 days to cause aging model. AEoTGE and EEoTGE were dissolved in pure water to make 1.0 g/ml solution. The AEoTGE, EEoTGE and Vitamin C solution were orally administered into mice with the dose of 0.1 ml/10 g body weight, once per day for 15 d using a feeding atraumatic needle. After administration they were sacrificed by cervical dislocation and liver was taken. The liver was given an icebath in 0.9% iced normal saline and made into 10% tissue homogenate, centrifuged at 3500 rpm at 4°C for 20 min, then kept at -20°C for next testing.

Superoxide anion (O2-) can promote the oxidation of hydroxylamine into its nitrite forms. Superoxide dismutase (SOD) is a special inhibitor to O2-.The assay for total superoxide dismutases (SOD) was based on its ability to inhibit the oxidation of oxymine by the xanthine-xanthine oxidase system [13]. SOD activity was determined using SOD Assay Kit. The operation was in accordance with the specification requirements of SOD kit.

All tests were carried out in 3 times. All data are expressed as s mean ± standard. Statistical analysis was carried out using SPSS software (SPSS, version 10.0). Data were analyzed using by Student’s t-test and were considered to be statistically significant if P ≦ 0.05. 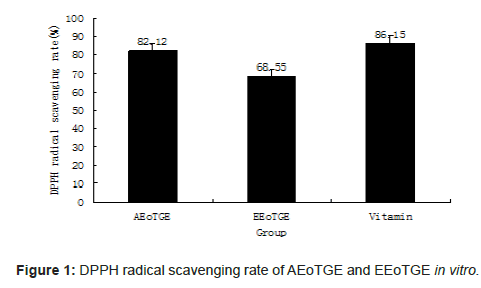 Activity of SOD in vivo

As shown in Figure 2, compared with the normal group, SOD activities in liver of model group decreased significantly (P<0.01). This suggested that antioxidant capability of organism under D-galactose condition was evidently weakened. It was found the antioxidant activity increased after the administration of AEoTGE (P<0.01), EEoTGE (P<0.01) and Vc (P<0.01) compared with the model group. The result indicated that AEoTGE and EEoTGE could improve SOD activity of mice, and the AEoTGE group is better than EEoTGE group. 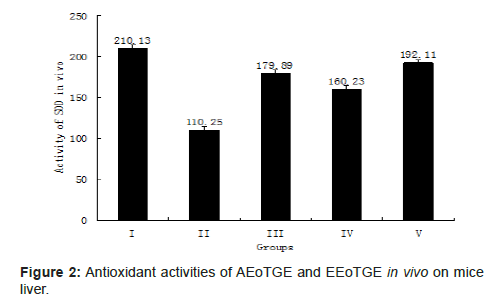 Figure 2: Antioxidant activities of AEoTGE and EEoTGE in vivo on mice liver.

In the present study, antioxidants regulate the body metabolism and promote the antioxidant capability of the organism, to further exert other functions and help to cure various diseases [14]. In order to study the possible relationship between antioxidant properties and the other effect such as anti-bacterial, anti-inflammatory and anticancer of Typhonium giganteum Engl., we examined the antioxidative potential of it in vitro and in vivo. Our data demonstrated that AEoTGE have good antioxidant effect compared with Vitamin C in vitro and in vivo. It could be a natural antioxidant eroxidation and its antioxidant activity should make contributions to its other aspect activities.

Supported by Scientific Found of Liaoning Provincial Department of Education General Project (No L2012146), Doctoral Initiating Project of Shenyang University of Chemical Technology (No32006077094) and University student Scientific and technological innovation projects (No 201210149004).