In this research finding, a new method is derived by adopting Maximum Specific Hydrogen Production Rate (Umax•H2) to measure the activities of anaerobic sludge for hydrogen production. With batch fermentation instrument under mesophilic (35°C ± 1°C) condition the research has been implemented and concluded. In this study, during the demonstration of experiments, for hydrogen fermentation as for the inoculum there three different active sludges are used and as for the feeding materials there kitchen wastes are tested. After resulting analysis it’s been showed that using the Maximum Specific Hydrogen Production Rate (Umax•H2) as a means to be an index or a method of sludge activity measurement-is reported as satisfactorily feasible and applicable. The Umax•H2 values of experimental groups for this research methodology are recorded as the following: Umax•H2(A)=30.24mL/gVSS•h, Umax•H2(B)=10.80mL/gVSS•h, Umax•H2(C)=18.05mL/gVSS•h. The Correlations between Umax•H2 and other parameters, such as cumulative hydrogen yield, fermentation period and degradation rate of TS are all remain Significant throughout the research. During experimental implementation, Pearson Correlation between Umax•H2 and fermentation period is reported as 0.997 achieving statistical Significance 0.047 (<0.05). Pearson Correlation between Umax•H2 and cumulative hydrogen yield is reported as 0.999 achieving a considerable trend toward Significance 0.022 (<0.05). Pearson Correlation between Umax•H2 and degradation rate of TS is reported as 0.999 Signifying a marginal trend toward Significance 0.027 (<0.05).

With increasing number of population and associated people's living standard-have been causing the rapid growth and production of kitchen wastes in current ages. It is well estimated that 36.5 million tons of kitchen wastes are being produced each year in India [1]. Even in China, 1.61 million tons of family food wastes had been being produced until 2013 [2]. Kitchen wastes are unquestionably harmful and can be active factors of environmental pollution being infectious to human health if its’ not been treated promptly and properlybecause of the remaining or left over wastes contain high contents of water and organic materials [3], which are certainly putrefactive [4] by causing groundwater resources polluted. Emission of Volatile Organic Sulfur Compounds (VOCs) during aerobic decomposition of food wastes can cause air pollution [5]. All sorts of pollutions can be promoted and produced during transforming food residue to feed [6]. As known kitchen waste contains a lot of Salmonella, Staphylococcus aureus and other pathogenic microorganisms [7], which can be inimitably dangerous to peoples’ health. Therefore, it has become a worldwide catchy matter of concern that how to make the food waste harmless, recycled and reproduced economically and sustainably. The common processing methods for kitchen wastes can be as reported from previous works are-direct emissions after mechanical pulverization [8], incineration and landfill [8], usage for feeding [9], composting [10], anaerobic digestion technology [11], etc. To treat the kitchen waste using anaerobic digestion technology can be beneficiary of both the elimination process of environment pollution and the resource utilization of wastes. Hydrogen production is one of the effective and efficient applications of anaerobic digestion technologies, which is preceded by physiological and metabolic activity of microbial. By dehydrogenation of organic compounds in the fermentation process, the surplus electrons of the redox process are balanced to ensure the smooth metabolic processes for the hydrogen production and inspection [12,13].

The choice of activated sludge in anaerobic digestion for hydrogen production plays an important role. At present, the indexes of activated sludge usually include Dehydrogenase Activity, ATP content, Oxygen Up taking Rate, Mixed Liquor Suspended Solid (MLSS) and Mixed Liquor Volatile Suspended Solids (MLVSS), Sludge Volume Index (SVI), Headspace Gas Chromatography Technology, Maximum Specific Methane Production Rate, etc. [14-18]. However, most of the above mentioned methods are mainly designed by concentrating on the activity measurement of the aerobic sludge; which clearly states that the study on fermentative activity measurement of anaerobic sludge is insufficient and not even on consideration table in recent research works. In this research article, Umax•H2 is defined as a measurement method of anaerobic sludge activity, and three different inoculums are cultivated and are adopted to test the measurement method to initiate the hydrogen production process of kitchen wastes. The study is to provide certain scientific basis for screening and preventing the demonstration of highly activated sludge, hydrogen production by anaerobic fermentation and energy-oriented use of kitchen wastes.

The feeding materials for this study are the kitchen wastes, which are taken from the canteen of Yunnan Normal University. After picking and separating out the plastic bags, chopsticks and other undigested sundries, the residues are dried out using thermostat oven at 105°C and pulverized into powder (30-200 mesh) using the pulverizer (Shanghai Guning Instrument Co., Ltd., DFY-400C, 30-200 mesh). The powder materials are directly used as feeding materials of digestion measurement. The Total Solids (TS) and Volatile Solids (VS) of feeding materials are measured before and after the fermentation process.

The inoculums A and C are obtained from the Biomass Energy Laboratory of Solar Energy Institute, Yunnan Normal University. Inoculums B is the sludge that has been obtained from a wastewater treatment plant in Kunming, China. The methods of the inoculums cultivation are captivated from Enrichment Culture [19]. To carry out the cultivation process-the substrate and fermentation residue are to be mixed at the ratio of 3:2 [20,21] then the mixture is to be placed in a sealed container to cultivate for 1-2 months until it turns in color of black or gray-black and gas production comes to the stop [22,23]. Inoculums A is to be cultivated at 35°C, and inoculums C is to be cultivated at ambient temperature.

In this finding, Batch fermentation technique [24] is adopted as the designing process of experiment, and all the experiments are carried out under mesophilic (35°C ± 1°C) condition. Three experimental groups and three parallels for each group are set to run the experiment all through.

The quantity of waste and inoculums are calculated by the following formula [25].

The experiment equipment (Figure 1) consists of a digestion bottle, a gas collecting bottle, a volume measurement bottle and a set of temperature control device. 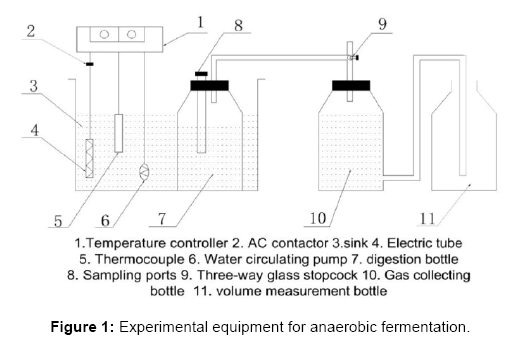 The capacity of fermentation system is 500 ml, and the air tightness of system is checked before the fermentation process in order to avoid possible gas leakage. The produced gas does get into the gas collecting bottle from fermentation bottle; and which then form the saturated NaHCO3 solution into volume measurement bottle from the gas collecting bottle. The volume of the production gas can be obtained by reading the scale of measurement bottle.

During the experimental installation and implementation, the TS and VS have been measured by the standard analysis methods [26].

pH value: Precision acidity meter of pHS-3C (Shanghai Hongyi Instrumentation Co., Ltd., 04C-482) is to measure the value. The VSS is measured by the gravimetric method [27].

Gas yield [28] using NaHCO3-draining (saturated solution of NaHCO3) method is to record the daily gas yield of each group in regular basis right after the experiment starts. In each group, during the field study as the characteristic gas yield, the average gas yield of 3 parallels is assumed.

The maximum specific hydrogen production rate (Umax•H2) is defined as the maximum yield of hydrogen gas per h per gram of VSS (indirectly represents biomass living weight of anaerobic sludge), the unit is mL/g•VSS•h.

The following expression can be drawn from the Monod equation U=Umax•S/Ks+S:

In the formula, S: Substrate concentration (gVS/L); t: time (h); Umax: Substrate maximum degradation rate (h-1); SX: Saturated microorganism concentration (gVSS/L); Ks: Saturation constant (g/L). The net sludge yield coefficient is declared as in small number under anaerobic condition. Concentration of microbes (recording it as X) is high in the reactor, while microbiological increment (recording it as ΔX) is much smaller than X. Therefore, X is considered to be approximately constant. In the measurement area, dissolved gas in the mixture is saturated; the gas dissolved in the mixture can be neglected. The kitchen waste is hydrolyzed fast in anaerobic systems, hydrogen production rate of kitchen waste is proportional to the rate of matrix degradation, and the following equation can be deduced as follow:

From the above equation, it can be deduced as follow:

At the beginning of the reaction, substrate concentration is high, S>>KS, Ks is negligible. Equation (4) can be as follow:

Thus the maximum specific hydrogen production rate can be obtained as follow:

can be calculated (Table 1).

Table 1: TS, VS and pH values of original materials and inoculums.

Table 2: TS, VS and pH value of feed liquid. Calculation and analysis on the activity of hydrogen production

As shown in Figures 4-6 the slope of the regression equation which are obtained from the measurement area [29-31] of cumulative gas production curve of experimental group A, B, C are: KA=58.56; KB=26.82; KC=32.63. And thus the Umax•H2 could be obtained by the calculation. Figure 4: Cumulative hydrogen yield curve in measuring area of experimental group A and the regression equation. Figure 5: Cumulative hydrogen yield curve in measuring area of experimental group B and the regression equation. As shown in Table 3, Umax•H2(A)>Umax•H2(C)> Umax•H2(B), which means that the activities of the inoculums (A, B and C) in the fermentation process of the kitchen wastes to produce hydrogen are different. Statistical result shows that the difference of activities (inoculums A, B and C) is considerably Significant (Sig.<0.01).

Analysis on the indexes of anaerobic fermentation

As shown in Table 4, the Correlations between Umax•H2 and other parameters-such as cumulative hydrogen yield, fermentation period and degradation rate of TS are all significantly identical up to 95% level. It indicates that using Umax•H2 as an index of fermentation for hydrogen is feasible. In addition, highly active sludge can be screened through this method.

1. From the statistical results of the experimental data it is showed that Umax•H2 of three experimental groups are found different from each other. The mathematical representation of the results of researched activities can be stated as following: Umax•H2(A)> Umax•H2(C)>Umax•H2(B).

3. By the Correlation analysis between Umax•H2 and other fermented indexes its’ been showed that using Umax•H2 as an index or method of the activity of inoculums for hydrogen production is practically feasible and implementable, and the prominent and satisfactory value of which can be obtained by running the experiment as discussed.

We are thankful to Solar Energy Research Institute Laboratory and staffs of Yunnan Normal University. This research was funded by National Natural Science Foundation (41561108). Thanks to the entire team for their outstanding supports in the project completion.

Copyright: © 2017 Yage Y, et al. This is an open-access article distributed under the terms of the Creative Commons Attribution License, which permits unrestricted use, distribution, and reproduction in any medium, provided the original author and source are credited.