Copyright: © 2014 Funahashi H, et al. This is an open-access article distributed under the terms of the Creative Commons Attribution License, which permits unrestricted use, distribution, and reproduction in any medium, provided the original author and source are credited.

Introduction: Gastrointestinal stromal tumors (GISTs) are commonly treated with surgical resection only, because they do not generally metastasize. We herein report our experience with curative resection of a GIST located at high lesser curvature using laparoscopic and endoscopic cooperative surgery.

Case presentation: An 81 year old male with hematochezia was diagnosed with a GIST in stomach and hemorrhoids. Endoscopy revealed that the tumor was located at high lesser curvature, jutted into the lumen of the stomach; no metastases were apparent. Laparoscopic surgery was performed to remove the tumor. The tumor, covered by mucosa and without ulceration, was resected with adequate surgical margins. Postoperatively, the patient was discharged without complications.

Surgical technique: We performed laparoscopic partial gastric resection assisted by endoscopy. The tumor was not visible through the laparoscope, but intraoperative endoscopy aided in its identification. The space left by enucleation of the tumor was closed using a flexible linear stapling forceps while an intracorporeal functional anastomosis was subsequently performed.

Conclusion: It is well-known that laparoscopic resection near high lesser curvature is difficult, but we were able to resect the tumor using this laparoscopic and endoscopic cooperative surgery (LECS) safely and easily.

It is well-known that complete surgical treatment is a common strategy for Gastrointestinal stromal tumors (GISTs). Traditionally, extraction of GISTs required open surgery with large incisions. Recently, laparoscopic gastric wedge resection surgery with stapling devices has been used for GISTs. However, it is difficult to find the intraluminal tumors by the sight of laparoscopy and gastric wedge resection may cause excessive resection. With these considerations in mind, the laparoscopic and endoscopic cooperative surgery (LECS) is very useful for GISTs. However, traditional LECS needs physician with specialistic endoscopic submucosal dissection (ESD) technique. We herein describe the approach of using modified LECS without ESD technique. We considered that our technique may substitute for conventional laparoscopic surgery, even in patients with GIST in every location within the stomach except the pylorus.

An 81 year old male visited our hospital with the complaint of hematochezia. Colonoscopy revealed hemorrhoids but no other distinct source of bleeding. However, upper gastrointestinal (GI) endoscopy showed a submucosal tumor, about 3 cm in diameter, located at the posterior wall of the lesser curvature, adjacent to the esophagogastric junction (Figure 1A). The tumor grew into the lumen of the stomach. Abdominal computed tomography (CT) showed tumor location and no evidence of metastasis (Figure 1B). After a thorough explanation of the risks and benefits, the patient gave written informed consent for surgical treatment. Figure 1A: Gastorointestinal endoscopy revealed that a submucosal tumor located at the posterior wall of the lesser curvature in close proximity to the esophagogastric junction (white arrow) 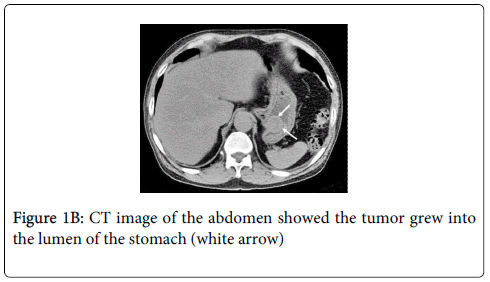 Figure 1B: CT image of the abdomen showed the tumor grew into the lumen of the stomach (white arrow)

Surgical technique: LECS was performed under general anesthesia, with the patient in dorsosacral position. A 12 mm port for the laparoscopy was inserted through an inferior umbilical incision. A 5 mm trocar and a 12 mm trocar on the patient's right side were used as working channels for the operator. Two additional 12 mm trocars in the left abdomen were used for the first assistant. The endoscopic operator was positioned at the top of the patient's head. Under a pneumoperitoneum of 10 mm Hg, the lesser omentum adjacent to the esophagogastric junction was opened to identify the tumor. However, because the tumor was growing into the lumen of the stomach, it was not able to be identified laparoscopically. The jejunum was then clamped about 15 cm distal to the ligament of Treitz, and the tumor location was able to be confirmed by intraluminal GI endoscopy (GIF-H260; Olympus, Tokyo, Japan). The endoscopy light shining through the stomach wall enabled the tumor to be detected by laparoscopy as well. To determine the line of resection with adequate margins, the stomach wall was maneuvered from the mucosal side using endoscopic biopsy forceps. The full-thickness stomach wall was opened along the line of resection using an ultrasonic cutting and coagulating device (SonoSurg; Olympus, Tokyo, Japan) (Figure 2A). Endoscopic visualization confirmed that the tumor was not damaged during resection and that adequate margins were present. Stay sutures were applied along the opening of the stomach where tumor was excised for anterior and posterior wound edge alignment prior to stapling, endoscopy confirmed that the closure was not anamorphic. The 3 sutures were then elevated and the incision line was closed with a laparoscopic stapling device (Endo-GIA; Tyco Autosuture, Tokyo, Japan) (Figure 2B). Finally, hemostasis of the incision line was confirmed by endoscopy, and it was confirmed that there was no deformity of the esophagogastric junction (Figure 2C). Total operation time was 150 minutes and blood loss was ultralow volume 3 ml. 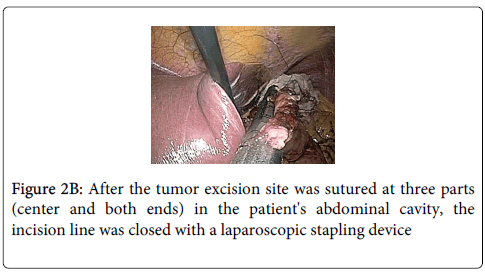 Figure 2B: After the tumor excision site was sutured at three parts (center and both ends) in the patient's abdominal cavity, the incision line was closed with a laparoscopic stapling device 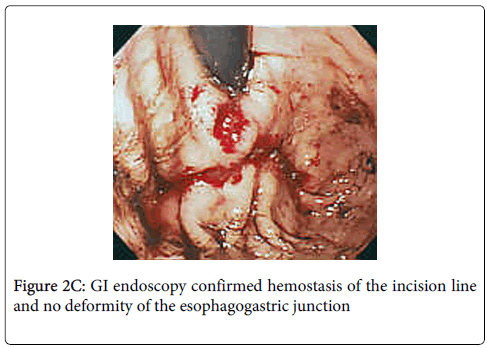 Figure 2C: GI endoscopy confirmed hemostasis of the incision line and no deformity of the esophagogastric junction

The patient was able to tolerate fluids and walk on the first postoperative day, and the drain was removed. The patient left the hospital without any complications. Pathologic examination revealed a GIST, positive for c-kit and CD34, 1 or 2 mitosis per 50 high power fields (low grade malignancy) and surgical margin was negative.

The patient has no recurrence after 18 months.

The main treatment strategy for gastric submucosal tumors, such as GISTs, is surgical excision. Because metastasis to lymph nodes is very rare with GISTs [1,2], complete excision is the standard treatment. Some authors purport that the laparoscopic approach is best for these tumors [3,4]. Generally, laparoscopic excision is reserved for GISTs located on the anterior wall of the stomach; the preferred technique is wedge resection using laparoscopic stapling devices [5,6]. Although wedge resection is easy to perform, it may result in excessive gastric resection and postoperative transformation or deformity of the stomach. Therefore, laparoscopic wedge resection is currently used for small tumors on the anterior wall of the stomach and has not been adopted for large tumors or for those in other locations, such as the esophagogastric junction area or the pyloric zone. Because of the technical difficulty, laparoscopic excision is not generally used for tumors at the fornix or along the lesser curvature on the posterior wall of the stomach. In addition, identification of extrinsic tumors in locations other than the anterior wall is difficult with laparoscopy. As a solution to these problems, we used intraoperative GI endoscopy to locate our patient's tumor. In our patient, the tumor was located at the lesser curvature on the posterior wall of the stomach, near the esophagogastric junction. As the tumor was growing into the lumen of the stomach, laparoscopy was unable to visualize the lesion. By using combination intraoperative GI endoscopy, we were able to visualize the tumor on the outside via transillumination from the endoscopy light within the stomach.

LECS method, originally proposed by Hiki et al., makes up for the shortcomings of laparoscopic surgery in patients with GISTs [6]. Traditional LECS uses a needle knife and needs the ESD technique. In contrast, we were able to extract the tumor without using ESD, making our technique simpler than traditional LECS. In our patient, endoscopy was necessary to confirm the tumor location, to cut the gastric wall without damaging the tumor, to ensure hemostasis, and to verify that no stomach-shape transformation was evident from the mucosal side of the stomach. Moreover, delivery of air from the endoscope also made it possible to exclude the presence of an anastomotic leak. Although GI endoscopy played an important role in this operation, we used primarily laparoscopy to determine the tumor borders and surgical margins and to excise the gastric wall. We believe that this modified combined technique makes laparoscopic surgery possible for GISTs in locations previously considered too challenging, even if experts in the ESD technique are not in the hospital.

The tumor was excised safely and adequately, according to the following oncologic principles: no direct handling of the tumor, full-thickness resection, and reasonable surgical margins. Our results suggest that surgical resection of tumors in any gastric location, except the pylorus, is possible with our method.