Copyright: © 2014 Perini MV. This is an open-access article distributed under the terms of the Creative Commons Attribution License, which permits unrestricted use, distribution, and reproduction in any medium, provided the original author and source are credited.

Synchronous colorectal cancer with liver metastasis (SCLM) represents a challenge for both surgeons and oncologists once 15-25% of patients diagnosed with colon cancer present metastatic liver disease. Surgical strategies have been developed in order to stratify patients and achieve better outcomes as simultaneous resection and reversal approach.

Synchronous colorectal cancer with liver metastasis (SCLM) represents a challenge for both surgeons and oncologists once 15-25% of patients diagnosed with colon cancer present metastatic liver disease [1]. Despite a worse prognosis when compared with metachronous metastases, surgical resection of all liver disease remains the only curative treatment of patients with SCLM with 5y survival ranging from 22-58% [2-6]. Simultaneous approach (SA) involves the resection of the primary tumor and the liver metastasis (with or with neoadjuvant chemotherapy) and contra pose to the classical colon first approach (CA). Reversal approach (RA) in which the metastatic liver disease is resected first is another therapeutic option that could be used in a minority of cases presenting with rectal cancer in which the amount of liver disease precludes a safe and margin free resection [7]. However the optimal surgical management of patients with SCLM remains controversial.

When facing the scenario of synchronic liver only metastasis of colorectal tumor, from the liver perspective, three main scenarios can be seen: 1-. unresectable, 2-potentialy resectable and 3-resectable liver disease.

Once patients with unrespectable liver lesion probably will not have a liver surgery performed upfront, these patients will be managed by oncologists and latter on, if substantial response occur, surgery could be discussed [8,9].

These patients benefit from systemic chemotherapy based on oxaliplatin and eventually monoclonal antibodies. If the tumor responds (which can be seen from 30-80%), liver resection may be offered [10]. The main issue is if radiotherapy should be given to the patients with mid/low colorectal tumors. Patients with potentially resectable liver lesions will have systemic chemotherapy if tumors are located in the colon and associated radiotherapy if tumors are located in the mid/low rectum and considered advanced tumors (T3N+ or T4). Vigano et al. reported excellent long term results in patients with advanced rectal tumor and limited synchronic liver metastasis that had neoadjuvant chemo radiotherapy and simultaneous resection [11].

For patients with resectable liver lesions, simultaneous, classical or reversal approach can be offered and the type of approach will depend in the amount of liver disease, primary stage, logistics between the colorectal and the liver team and patients’ performance status.

For patients with non metastatic locally advanced rectal cancer (T4 or T3N+), several randomized trials have shown that neoadjuvant chemoradiotherapy associated with total mesorectal excision (TME) is the best approach [12-14]. In a context of resectable liver metastasis only, one randomized trial showed increased disease free survival for patients that had neoadjuvant chemotherapy with FOLFOX [15]. So it seems a reasonable approach to patients with resectable liver disease and locally advanced rectal cancer to have systemic chemotherapy associated with radiotherapy. As conventional neoadjuvant 5-FU based chemoradiotherapy is inadequate to control distant metastases, oxaliplatin or irinotecan based schemes seem to be more rational (associated or not with target agents).

When using neoadjuvant treatment, the theoretical advantage of time test (tumor behavior) and eradication of micrometastatic disease is opposed to the liver injury secondary to its use. Parenchymal liver injury is a major concern in patients having more than 6 cycles of oxaliplatin/irinotecan [16,17] but its drawbacks could be overcome by two-stage hepatectomy or portal vein embolization [18,19]. Moreover, two retrospective series failed to demonstrate any survival advantage in patients with synchronic liver metastasis submitted to simultaneous liver and colonic resection that had neoadjuvant chemotherapy [20,21]. These data is contraposed by one bicentric study in which systemic chemotherapy was offered for patients with advanced liver disease (more than three resectable liver lesions) and locally advanced rectal cancer [11].

The effectiveness of new drugs (response rates ranging from 30- 70%) is challenging the use of radiotherapy in advanced mid/low rectal cancer [10]. Despite being the gold standard treatment of advanced distal rectal lesions (T3/4 and N+), radiotherapy lacks systemic effect and local complications are quite common [14]. On the other hand, with new drugs, systemic chemotherapy is as effective as radiotherapy in tumor response and spares patients unnecessary side effects [25,26]. Stronger evidence should be achieved in order to propose the best approach in patients with SCLM and advanced mid/low rectal cancer but preliminary data showed that in downsized patients, synchronic resection could be an interesting option, with good long term survival [11].

For patients with resectable liver lesions and not advanced mid/ low rectal tumors, upfront simultaneous surgery is an option for both liver and colon (Figure 1). As there in no prospective randomized study dealing with such approach, available data is mainly based in retrospective series and cohort studies. 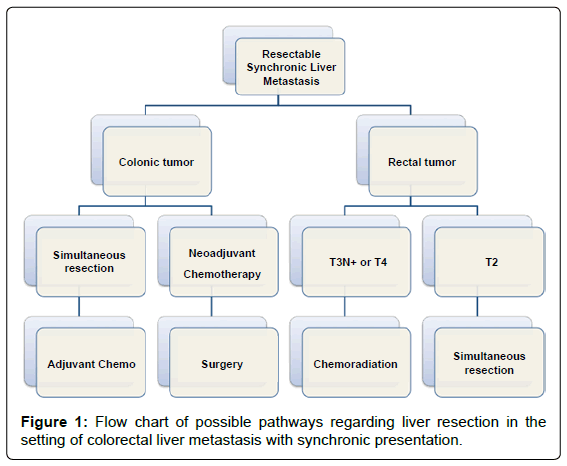 Figure 1: Flow chart of possible pathways regarding liver resection in the setting of colorectal liver metastasis with synchronic presentation.

After the advances in peri-operative management, simultaneous liver and colon resection (SLCR) has been proposed worldwide with acceptable morbidity and mortality and comparable survival [23,27-29]. Even more, some can argue that simultaneous resection in selected cases carries advantages such reduced length of hospital stay and costs over the classical approach. In which patient SLCR should be performed is still a matter of debate, but most hepatobiliary surgeons agree that specialized teams should do it and that minor liver resections are usually safe.

Regarding the type of resection most commonly performed in the simultaneous approach, one multicentric retrospective analysis showed a preponderance of colonic over rectal tumors and minor over major liver resections. Most of cases have unilateral liver disease and neoadjuvant chemotherapy was performed in less than one third of the cases when compared to the classical approach. Contrary, most cases submitted to reversal approach had chemotherapy before resection [6]. The timing of surgery is still a matter of debate, but most surgeons agree that the less chemotherapy patients have, the best. So, as soon as liver lesions are resectable, liver resection should be offered.

Many series have compared major liver resections and simultaneous colorectal tumor resection regarding staged vs. simultaneous approach [3,5,23,28-36]. Mortality rates were similar in in the two groups and when considering the two hospitalizations, morbidity and hospital stay were lower in the simultaneous group [4,32,36]. Data from one large multicentric retrospective study involving 1004 patients showed that for patients undergoing a major hepatectomy, there was no difference in overall complications between groups. Although the SLCR group had a higher incidence of mortality (8% vs. 2.8%) it was not statistically significant [6].

Simultaneous laparoscopic resection of colon and liver is feasible and many case series have shown good results. Lesions located in the antero-lateral segments are more prone to laparoscopic resection, but even major resections have been performed by specializes centers. Despite the lack of high quality evidence and survival data, it can be considered in a small subset of well-selected cases [37].

As demonstrated by retrospective studies and meta-analysis, longterm outcomes of overall and recurrence-free survival are similar when SCLM is compared to the classical approach [38-40]. When comparing the three approaches (classical, simultaneous and reversal) some studies have shown that the operative strategy had no impact on long-term outcomes, showing the importance of tumor behavior over the technical assessment [5,6]. Reversal approach may be a particularly beneficial in patients with a large amount of liver disease (but potentially resectable) and advanced rectal tumors, in order to not delay systemic treatment. Despite rational and widely discussed, until now only few studies (three observational and one retrospective cohort) have been published regarding reversal approach involving at all 91 patients [41].

Summarizing, simultaneous resection of colorectal liver metastasis is safe and feasible and should be considered in the treatment of selected patients with metastatic colorectal cancer in specialized centers.