Copyright: © 2016 Anandan S, et al. This is an open-access article distributed under the terms of the Creative Commons Attribution License, which permits unrestricted use, distribution, and reproduction in any medium, provided the original author and source are credited.

Background: A. baumannii-calcoaceticus (Abc) complex has surfaced as a major nosocomial pathogen causing blood stream infection and ventilators associated pneumonia (VAP). Carbapenems have come to be the cornerstone of treatment for Abc complex. However, there has been an increased incidence of infections with carbapenem resistant strains. To validate the clinical practice of combination antibiotic therapy, in-vitro combinations of antibiotics have been examined using checkerboard methods, E-tests, and the reference, time-kill assay.

Method: A prospective pilot study was conducted for the duration of one year. Twenty five isolates of carbapenem resistant Abc complex cultured from endotracheal aspirates of patients admitted in medical and surgical intensive care units diagnosed with ventilator associated pneumonia were collected. Isolates were tested for MIC (Minimum inhibitory concentration) by micro-broth dilution method for meropenem, sulbactam and colistin. Synergism between sulbactam plus meropenem and sulbactam plus colistin was tested by micro-broth checkerboard assay and the reference, time kill assay.

Conclusion: Against multi-drug resistant (MDR) isolates of Abc complex, commendable synergy was seen with time kill assay for sulbactam plus meropenem combination. Therefore, in-vitro combinations of antimicrobial agents are most effective than the single agent against multidrug resistant organism.

In the genus Acinetobacter, A. baumannii has proved to be the most important species accountable for infections [1]. Wide spectrum of illnesses ranging from hospital acquired pneumonia, communityacquired pneumonia, catheter related bloodstream infections, urinary tract infections related to urinary catheters, meningitis, traumatic battlefield to other wound infections have been caused by A. baumannii [2-5]. This has been made possible by its environmental adaptability [5].

Studies have described the ability of Acinetobacter spp. to exchange genetic elements, which, in turn, results in development of resistance to many classes of antimicrobial agents. Hence, the antibiotics that are used to treat life threatening infections caused by A. baumannii are carbapenems, polymyxins E and B, sulbactam, piperacillin/ tazobactam, tigecycline and aminoglycosides [5]. Among these antibiotics, carbapenems occupy a distinguished place in the empirical therapy [6]. However, over the past several years, there has been a sharp increase in the development of resistance to carbapenems. This is mediated by the production of carbapenemases, expression of efflux pumps and porin channel loss [5].

To overcome resistance, combination therapy has been used against multi-drug resistant organisms to achieve synergy, which, in turn can boost the efficacy of treatment [7]. Extensive research has been conducted on understanding combination therapy for A. baumannii [8,9]. To support this clinical practice, in-vitro combinations of antibiotics have been examined using checkerboard methods, E-tests, and the reference, time-kill assay.

In the present study we aim to determine the minimum inhibitory concentration (MIC) of meropenem, colistin and sulbactam by broth micro dilution, followed by detection of synergism between sulbactam plus meropenem and sulbactam plus colistin for Abc complex isolates using the reference method of time-kill assay. Further, we will compare this synergism with checkerboard assay, which in turn will help in understanding the effective drug combinations.

The study was conducted in the NABL (National Accreditation Board for Testing and Calibration Laboratories) accredited Department of Clinical Microbiology (M0728), Christian Medical College, Vellore, which is a tertiary health care centre in Tamilnadu, India. Twenty five consecutive non-duplicate isolates of carbapenem resistant Acinetobacter baumannii - calcoaceticus complex were collected prospectively from July 2014 to June 2015. These isolates were cultured from endotracheal aspirates of patients admitted in medical and surgical intensive care units diagnosed clinically and radiologically as ventilator associated pneumonia. In addition, these endotracheal aspirates showed a growth of ≥ 105 CFU/ml fulfilling the microbiological criteria of ventilator associated pneumonia.

Demographic details of the patients were also collected. According to the standard protocol, conventional biochemical reactions were used for the species identification of the isolates [13]. All the study isolates were tested for resistance to carbapenems using imipenem and meropenem by disk diffusion technique and the zone sizes were interpreted based on CLSI (Clinical and Laboratory Standards Institute) 2014 guidelines [14].

Checker board assay: The checkerboard method of synergy testing determines the activity of antimicrobial combinations tested at clinically achievable concentrations in serial twofold dilutions, in two dimensions [16]. Interpretation of the result is done by calculating fractional inhibitory concentration (FIC) for individual antibiotics at a given concentration combination. Synergy is defined as an FIC index of ≤ 0.5, indifference/ no interaction as an FIC index of >0.5 to <4 and antagonism as an FIC index of >4. When the FIC index is in the range of 0.5 to 1.0, it is considered to be non-synergistic or additive [16].

Time kill assay: Time kill assay is considered to be reference method for in-vitro synergy testing. The assay is based on minimum bactericidal concentration testing (MBT) which determines the concentration of antimicrobial agent required to kill 99.9% of an inoculum after being exposed for a period of twenty four hours. It determines the rate and extent of killing, therefore helping in predicting response to therapy [17]. A standard protocol for performing time kill assay has been laid out by National Committee on Clinical Laboratory Standards (NCCLS currently known as CLSI) in 1999 [13,14]. The assay is carried out in glass tubes containing 10ml of cation- adjusted Mueller Hinton broth, into which the inoculum and a fixed concentration of antimicrobial agents is added. One tube of sterility control, one tube of growth control, tubes for individual antimicrobial agents and combination of agents are included for each isolate.

The age of the patients ranged between 19 years to 76 years. When observed for the age distribution, mean age was found to be 46.8 years. There were differences in the number of isolates recovered from male and female patients. The sex distribution was observed to be slightly on the higher side for males. Eighteen (72%) isolates were from males and seven (28%) were from females.

Antagonism was not observed by either of the methods and with any of the combinations tested. Figures 1a and 1b describes the cumulative effect of sulbactam plus meropenem and sulbactam plus colistin combinations in time-kill assay on all the isolates, respectively [18]. 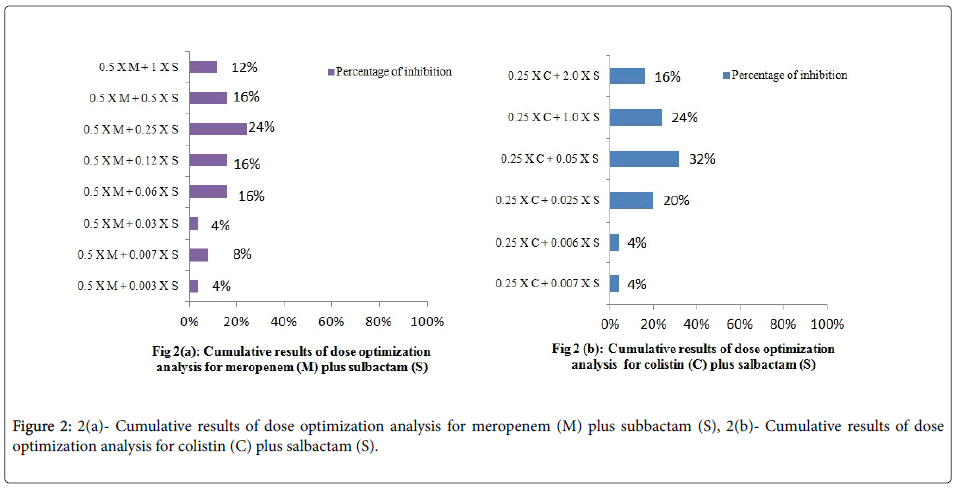 A. baumannii is frequently isolated from health-care associated infections especially ventilator associated pneumonia [19]. Over the last decade, carbapenem resistance in A. baumannii has been steadily increasing across the globe, and there are very few therapeutic options available for life threatening infections [20]. Studies on clinical efficacy of treatment with antimicrobial combinations on Acinetobacter species showed higher clinical response (76%) with carbapenems plus colistin combinations compared to monotherapy. Few studies also showed higher survival rate in combination therapy with carbapenem plus colistin (mortality rate of 19%) and carbapenem plus ampicillin/ sulbactam (mortality rate of 30%). Combinations of carbapenem with sulbactam did not show any statistically significant difference in microbiological eradication [21].

Antagonism was not detected in both the combinations tested. However, Pongpech et al. have shown antagonism in 6.7% of the isolates against meropenem plus colistin and in 13.3% of isolates against sulbactam plus colistin combinations [22]. The difference in results from various studies for same combination with checkerboard assay could be due to discrepancies in the analysis of results and diverse characteristics of the isolates [26].

In this study, synergy rates detected by time kill assay exceed the synergy rates detected by checkerboard assay. Meropenem plus sulbactam combination showed 68% synergy by time kill assay, whereas checkerboard assay showed 52% synergy. Similar findings were seen with the colistin plus sulbactam combination. Systematic review has also described higher rates of synergy with time- kill assay [27]. The limitations of this study are: synergism observed by time kill assay and checkerboard assay have not been compared with molecular mechanisms of resistance. The possibility of synergism being determined by the activity of the particular beta-lactamase produced by the organism and other mechanisms of resistance like efflux pump production or porin loss was not studied. Correlation of this nature might have aided in predicting the presence of synergy based on the prevailing resistance mechanism.

On analyzing the results of time kill assay for both the combinations (sulbactam plus meropenem and sulbactam plus colistin), we can infer that, in-vitro combinations of antimicrobial agents are more effective than a single agent against multidrug resistant organisms. Welldesigned animal model studies and clinical studies are essential to validate the findings of the present study.

Ethical Clearance and Consent for Publication

The authors have declared no conflict of interest.