Synthesis of A Novel Ferrocene Derivative and Cytotoxicity to A549, HCT116 and MCF-7 Cell Lines

3Fujian Institute of Research on the Structure of Matter, Chinese Academy of Sciences, Fuzhou, 350002, China

Copyright: © Yong J, et al This is an open-access article distributed under the terms of the Creative Commons Attribution License, which permits unrestricted use, distribution, and reproduction in any medium, provided the original author and source are credited.

Cancer is a major health problem worldwide. The death caused by cancer mainly is lung cancer, breast cancer, liver cancer, carcinoma of colon and rectum. Some small molecule anticancer agents have been approved by the U.S. Food and Drug Administration (FDA) in clinics and some are currently in clinical trials [1,2]. However, cancer chemotherapy is still highly inadequate. Thus, it is urgent to discover novel anticancer agents.

Ferrocene is a potential pharmacophore for drug design and drug discovery, for it is a neutral, chemically stable and nontoxic molecule [3]. Some ferrocene derivatives are potential metal-based anticancer agents [4].

To find the most potent anticancer agents based on the ferrocene core, another new structure of ferrocene derivative 1 was synthesized in present work. The synthetic route was outlined in Figure 1. The target compound was confirmed by 1H NMR, 13C NMR, MS and XRD methods. And then, the cytotoxicity to A549, HCT116 and MCF-7 cell lines was preliminarily evaluated.

Melting point was determined on XT-5 (Benjing Keyiecopti Instrument Factory) apparatus equipped with a microscope and value is uncorrected. 1H and 13C NMR spectra was recorded on a 400 MHz Bruker AVANCE III spectrometer in CDCl3, the chemical shifts are expressed in ppm relative to tetramethylsilane (TMS) as the internal standard; ESI-MS was performed on a DECAX-30000 LCQ Deca XP (70 eV). The reaction was monitored by thin layer chromatography(TLC) on silica gel plates at 254 nm under a UV lamp using petroleum or ethyl acetate as eluent. Column chromatography separation were obtained on silica gel (100-200 mesh). All solvents were of analytical grade and used without further purification unless specially stated.

The process for the preparation of the target compound 1

The cytotoxicity to A549, HCT116 and MCF-7 cell lines of compound 1 was evaluated using the MTT method. The cancer cell lines were cultured in Dulbecco’s Modified Essential Medium (DMEM) supplemented with 10% fetal bovine serum and 1.5% antibiotic/ antimycotic(Life Technologies, Invitrogen, USA) and maintained in CO2 incubator at 37°C, at 5% CO2 and 95% atmospheric humidity. The mixture of DMSO, PBS and DMEM was used as a negative control and gefitinib was used as the positive control. The detailed process see the reference [7].

In our previous study, we added the ferrocenemethanol to the cyanuric chloride solution in THF, we obtained a novel structure of ferrocene derivative (Figure 2), and we have proposed the reaction mechanism of forming this compound [8]. 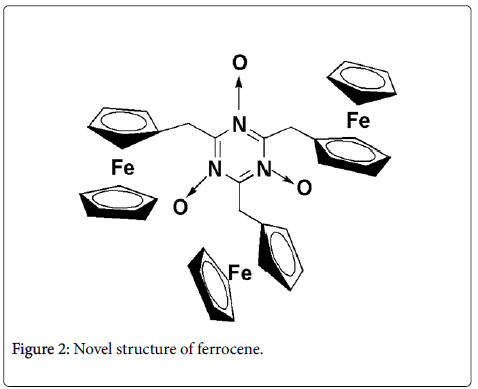 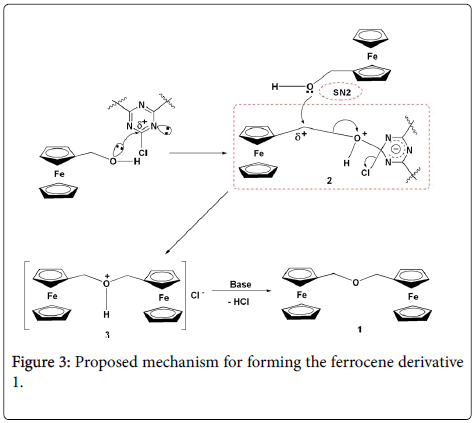 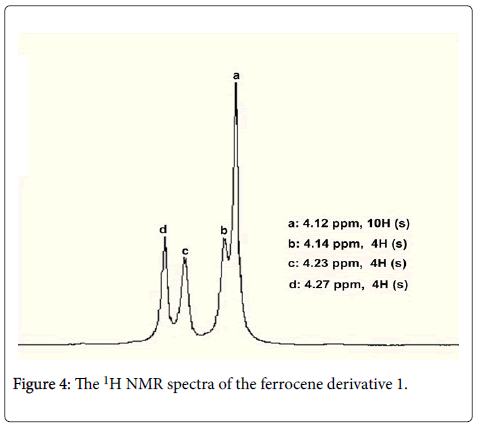 Figure 4: The 1H NMR spectra of the ferrocene derivative 1.

X-ray diffraction data for the ferrocene derivative 1 was collected on a Siemens Smart CCD diffractometer equipped with a graphitemonochromated CuKα radiation(λ=1.54178Å). The structure was solved by direct method using the program SHELXL-97 and refined by full-matrix least-squares techniques on F2 with SHELXL-97 program package [9]. The molecular structure showed in Figure 5 (CCDC Number: 1487772). 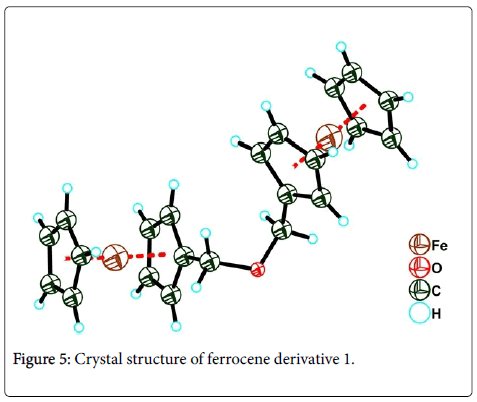 The authors confirm that this article content has no conflict of interest.

This work was financially supported by the National Natural Science Foundation of China (51672271).