Copyright: © 2013 Maeda K, et al. This is an open-access article distributed under the terms of the Creative Commons Attribution License, which permits unrestricted use, distribution, and reproduction in any medium, provided the original author and source are credited.

Although clear fetal heart tones were auscultated with high-pitched tones, a sinusoidal fetal heart rate (FHR) was unable to be diagnosed, thus it was concluded that no fetal heart tone auscultation was suitable for the fetal monitoring. Fetal heart systolic period was stable and the diastolic duration varied when the FHR changed. FHR curve was traced with the triggers formed by single negative signal from the two tones of heart sound in the instantaneous FHR meter, of which microphone touching noise in FHR curve was prevented using autocorrelation heart rate meter, which made the automatic computerized FHR diagnosis successful. Fetal phonocardiography (fPCG) was studied by the tracing of fetal heart tones with the high-pass and low-cut frequency character. The oscilloscopic image recorded on a photographic film and the ink-writing record with slow-down tape technique using a data recorder achieved the recognition of high frequency component of fetal heart sound. The fetal heart tones of 105 normal pregnancies were studied and diamond shaped 100-200 Hz systolic murmur was recorded in 16.8% of the cases, which was not recorded and no cardiac abnormality was realized in the neonates after birth. Continuous wave ultrasonic record did not realize the murmur, therefore, the murmur was considered physiologically developed by the blood flow of fetal ductus arteriosus limitedly in antenatal life.

A sensitive low impedance (8 ohms) dynamic microphone was connected to the step-up transformer and transistor amplifier with the peak at 60 Hz. The large corn speaker radiated low frequency fetal heart sound, of which frequency was, however, too low to listen, and disturbed by howling. Hence, the author used high pitched fetal heart sound listening device, where 1.2 kHz oscillation was modulated by low 60Hz fetal heart sound and the output was a small corn dynamic speaker (Figure 1).

The fetal heart sound shape was studied by its records using adult standard microphone, hand-made amplifier and various recorders. The oscilloscopic image record the highest frequency range of heart sound, but needed to record with a film camera, and the record was studied after processing the film. Heat-pen or ink-writing recorder was easy to handle, but the high frequency was poorly recorded. The problem was solved by a slow-down tape technique, where the signal was recorded with TEAC R-400 data recorder (TEAC, Tokyo, Japan) with 30 in/s tape speed, and the recorded tape was reproduced with 3 in/s tape speed, where a high frequency signal was slow down to low frequency signal and recorded by the heat-pen or ink-writing recorder (Figure 2). Figure 2: A fetal phonocardiogram recorded with abdominal lead fetal ECG. Microphone was modified TY-301 (Fukuda electrics, Yokyo), Slow down tape output for 1/10 was recorded by San-Ei v-20 ink writing recorder. No fetal heart murmur was recorded in the case of the late stage of pregnancy. 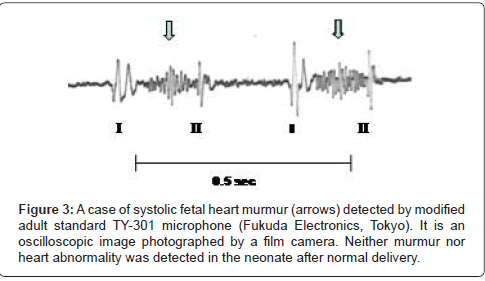 Figure 3: A case of systolic fetal heart murmur (arrows) detected by modified adult standard TY-301 microphone (Fukuda Electronics, Tokyo). It is an oscilloscopic image photographed by a film camera. Neither murmur nor heart abnormality was detected in the neonate after normal delivery.

Although the FHR was initially recorded by direct lead fECG obtained by the scalp electrode was using instantaneous FHR meter, it was unable to trace the FHR during pregnancy and in early stage of labor before the rupture of membrane. Therefore, fetal heart sound on maternal abdomen was applied to trace the FHR with instantaneous FHR meter by Hammacher and Gentner [5] and Maeda [6], where single trigger was constructed from the first and second tones of fetal heart sound in a heart beat. Hammacher and Gentner [5] solved the problem by an algorithm and by flip-flop multivibrator by Maeda [6].

Although the high pitched fetal heart sound of I and II tones were easily listened, recorded by common tape recorder, and transmitted by telephone line, but the listening was unable to detect sinusoidal FHR which was confirmed later by the processing of its tape recorded tone with a fetal heart rate (FHR) monitor (Toitu, Tokyo) (Figure 1), thus fetal heart auscultation did not apply to monitor the fetus to detect FHR abnormalities. Table 2: Durations of fetal systole and diastole according to the FHR change.

The murmur was diamond shaped and composed of 100-200 Hz vibrations during the systole between the first and second tones. The murmur was recorded in 16.8% cases of normal fetuses, and neither murmur nor heart abnormality was detected in the neonates after the delivery, whose fetuses exhibited systolic murmur (Figures 3 and 4).

Although clear fetal heart tones were listened by the high-pitched fetal heart sound listening device and its tones were easily recorded by the common tape recorder and transmitted by telephone line, the tone could detect only continuous brady- or tachycardia, but no transient FHR change, no sinusoidal FHR or no LTV change, where the FHR tracing obtained by the CTG recorded by the processing of reproduced fetal heart sound just detected valuable FHR changes. Therefore, simple auscultation of fetal heart tones should not be used in fetal monitoring even in low risk cases, where the possibility exists to produce abnormal FHR caused by sudden changes of umbilical cord, placenta or fetal environments. It was remarkable that a beat-to-beat difference was detected by fetal heart tones by the instantaneous FHR meter and the beat-to beat FHR difference recorder [8].

Fetal heart tone was composed of the first (I) and second (II) tones. Therefore, FHR counted by simple application of fetal heart sound would be twice of true FHR. The systole, however, almost stable in the fetal phonocardiogram, therefore, the FHR was recorded using single trigger signal produced by flip-flop multivibrator [8].

Digital technique can be used in modern fPCG, i.e. single frequency characteristics preamplifier output will be sampled with 2 ms interval and stored in computer memory. Read-out fetal heart sound is shown in computer display. Hard copy is printed out. Any analysis of the sound is performed by the computer on the read-out data. Every thing will be simplified by the computerized digital analysis.

Fetal heart sound auscultation should not be applied for the fetal monitoring due its poor ability to detect FHR abnormalities. FHR was recorded by instantaneous FHR meter with the single trigger formed by two tones. Beat-to-beat FHR variation was recorded with fetal heart sound too. The autocorrelation FHR meter rejected FHR tracing noises in automatic FHR diagnosis. Although fetal systolic murmur detected in the fPCG was physiologic in our cases because it disappeared after the birth and no cardiac abnormality was found in the neonate, fetal heart murmur may be a positive screening sign of congenital heart disease.