2Department of Food Science and Technology and Microbiology, Via Celoria 2, Milan, Italy

Copyright: © 2015 Gambaro V, et al. This is an open-access article distributed under the terms of the Creative Commons Attribution License, which permits unrestricted use, distribution, and reproduction in any medium, provided the original author and source are credited.

The taxonomic identification of mushrooms suspected to contain hallucinogenic active principles was carried out using a DNA-based approach, thus highlighting the usefulness of this approach in the forensic identification of illegal samples also when they are difficult to identify because the morphologic identification is prevented, due to the bad conservation of the vegetable material. To confirm the presence of the illegal active principles, the optimization of a LC/MS-MS method for the qualitativequantitative analysis of psilocin and psilocybin in mushroom samples seized by the judicial authority is described. For the quantitative determination it was necessary to identify and synthesize a proper internal standard (IS, i.e., 5-hydroxy-N,N-diethyltryptamine), endowed with chromatographic features suitable for the analysis of the active principles. LC/MS-MS analysis evidenced that the amount of psilocybin ranged from 0.5 to 1.4% while that of psilocin from 1.3 to 2.5% (w/w), confirming literature data. The concentration of psilocin was higher in the cap and in the distal part of the stem (near to the soil) than in the part of the stem proximal to the cap. On the other hand the concentration of psilocybin was higher in the cap and in the proximal part, being lower in the distal part of the stem.

Psychoactive plants or fungi accompanied religious rituals in many ancient civilizations worldwide [1-4]. Hallucinogenic compounds contained in fungi of Psilocybe and Amanita genera have been used as recreational drugs of abuse since the beginning of the 1960s [5,6]. Although hallucinogens are thought to be safe because of relatively low physiologic toxicity and dependence potential [7,8] nowadays the context of hallucinogenic compounds consumption, mainly by young people seeking for unusual experiences, is usually negative [5,6,9]. The psychoactive principles of Psilocybe mushrooms, namely psilocybin and psilocin, were isolated and identified by Hofmann in 1958 [10]. Psilocin and psilocybin are naturally occurring indoles (Figure 1) found in several species of mushrooms [11,12] at concentrations of up to 0.5% m/m and 2% m/m, respectively [13]. Psilocybin is rapidly dephosphorylated to psilocin in vivo [14], with the latter compound being structurally related to the neurotransmitter serotonin (Figure 2) which gives rise to its comparable human metabolism [15]. This molecular similarity endows psilocin with high affinity for serotonin receptors, which blocks the release of the neurotransmitter thus giving rise to hallucinogenic effects [16]. Both psilocin and psilocybin are controlled substances in many countries, as intentional intoxication from these compounds continues to be a major problem in USA and Europe [17]. Gas chromatography cannot be recommended since the poorly volatile and heat-labile psilocybin tends to decompose by loss of the phosphate group during injection. All Liquid Chromatography (LC) methods described so far are based on RP LC [18] with conventional C18 columns. Due to the phosphate group the polarity of psilocybin is much higher compared to psilocin.

Figure 2: Synthesis of 5-hydroxy-N,N-diethyltryptamine (IS).

Hallucinogenic fungi taxonomically fall into several genera, the most well-known being the genus Psilocybe. Certain species of these genera synthesize psilocin and psilocybin. Since not all members of a given fungal genus contain psilocin or psilocybin, identification of an unknown fungal sample to the species level is required for legal proceedings. The determination of the species requires the analysis of several morphological characteristics. Often the samples seized by the judicial authority are dried, powdered or reduced in small pieces; consequently the morphological identification is difficult. A DNAbased approach ensures the identification of samples in the absence of morphological characteristics [19].

In this paper we describe a DNA-based approach for the taxonomic identification of mushrooms species in order to help the forensic identification of illegal samples found on the illicit market, especially when the morphological characteristics cannot be examined. Moreover the optimization of a LC/MS-MS method for the quali-quantitative analysis of psilocybin and psilocin in mushroom samples seized by the judicial authority was carried out. For the quantitative determination it was necessary to identify and synthesize a proper internal standard (IS, i.e., 5-hydroxy-N,N-diethyltryptamine), endowed with chromatographic features suitable for the analysis of the active principles.

Analyses were carried out on four mushrooms seized by the judicial authority at the Malpensa airport in Northern Italy in February 2014. The weights and lengths of the vegetable materials are reported in Table 1.

Table 1: Characteristics of the vegetable material.

Hundred mg of mushrooms were processed for DNA extraction by means of Ultra CleanTM Microbial DNA Isolation Kit (Mo Bio, Canada), according to manufacturer’s instructions. After DNA quantification with a Smart SpecTM Plus Spectrophotometer (Bio-Rad Laboratories, Milan, Italy) and evaluation of 260/280 ratio, 50 ng of DNA were used for species identification based on Internal Transcribed Region located between the 18S- and the 28S rDNA genes as previously well acknowledged for its ability to identify yeast to the species level [20]. The amplification was performed in a final volume of 25 μl, containing 0.5 μM of each primer (NL1: GCATATCAATAAGCGGAGGAAAAG; and NL4: GGTCCGTGTTTCAAGACGG) [20], 1 unit of DreamTaq (Fermentas, Thermo Scientific, Italy) and 50-70 ng of DNA. The reactions were performed in an automatic thermal cycler (EppendorfMastercycler, Italy) under the following conditions: initial denaturation at 94°C for 3 min; 36 cycles of 94°C for 2 min, 52°C for 1 min, 72°C for 2 min; final extension at 72°C for 7 min, holding at 4°C. The amplified products were then purified by means of UltraCleanTM PCR Clean-up DNA purification kit (Mo Bio, Canada) and finally sequenced by using primer NL1. The sequences were analyzed by use of the software Chromas2.33 (Technelysium Pty Ltd, South Brisbane, Australia) and compared to the sequences reported in the GenBank using the BLAST algorithm.

Psilocybin 1.0 mL (100 μg/mL) in methanol was purchased by Grace (Illinois, USA); Psilocin 99.3%, 1.0 mL (5 mg/mL) in methanol was from Cerilliant, (Texas, USA); 5-benzyloxytryptamine hydrochloride and all the other reagents and solvents of analytical grade were supplied by Sigma Aldrich (St. Louis, USA) and were stored as required by the manufacturer. Water (18.2 MΩ cm) was prepared by a Milly-Q System (Millipore, France).

a) Triethylamine (68 μL, 0.49 mmol) was added to a suspension of 5-benzyloxytriptamine hydrochloride (150 mg, 0.49 mmol) in anhydrous methanol (7 mL) under an inert atmosphere. The mixture was cooled at 0°C and glacial acetic acid was added (112 μL, 1.96 mmol). A solution of acetaldehyde (66 μL 1.18 mmol) in methanol (7 mL) was slowly dropped (10 min). The mixture was stirred at room temperature for 2 hr until the complete transformation of the starting product (TLC: eluent: dichloromethane/methanol 8:2). The pH was adjusted to 8-9 by a 2M solution of sodium hydrogencarbonate and methanol was evaporated. The aqueous solution was extracted with dichloromethane (3 × 10 mL) and the combined organic phases were washed with water (1 × 10 mL) and brine (1 × 10 mL) and dried with anhydrous sodium sulfate. The solvent was removed under vacuum and the residue purified by a flash silica gel chromatography (eluent: dichloromethane/methanol 9:1), obtaining a pale yellow oil (86 mg, 55% yield).

b) 5-benzyloxy N,N-diethyltriptamine (86 mg, 0.26 mmol) was dissolved in methanol (2 mL) and a catalytic amount of Pd/C 10% (8.7 mg) was added. The mixture was stirred under a hydrogen atmosphere for 24 hr and then filtered on celite. The solvent was evaporated and the residue purified by a flash silica gel chromatography (eluent: dichloromethane/methanol 8:2), obtaining a pale yellow powder (40 mg, 63% yield). In Figure 3 the MS/MS spectrum of the target compound is reported. 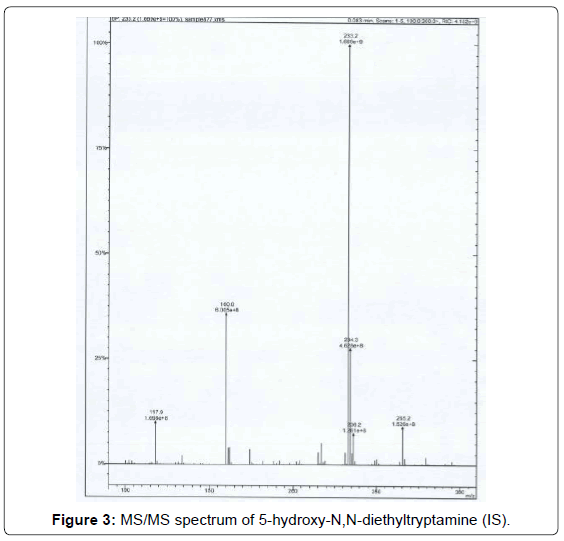 Figure 3: MS/MS spectrum of 5-hydroxy-N,N-diethyltryptamine (IS).

Preparation of the samples

Each mushroom was divided into three parts: cap, proximal part of the stem respect to the cap and distal part of the stem. From each part 100 mg for each mushroom (total 400 mg) were withdrawn and extracted with 4 mL of methanol by maceration overnight. The mixture was sonicated for 10 min and the supernatant filtered on a 0.45 μm membrane. Each extract was analyzed in triplicate adding to 300 μL of the extract 300 μL of a IS solution (10 μg/mL).

Table 2: MRM transitions of each analyte and IS.

Linearity of the analytical method

When dealing with mushrooms it is very useful to assess the genus and species of the biological materials because also the fungi are inserted in the illicit substance list. Sometimes samples seized by the judicial authority are dried or powdered and the morphological characteristics are not recognizable. Therefore an unambiguous identification by a phylogenetic approach could be very helpful, especially in the cases in which active principles could be degraded due to an incorrect storage of the vegetable material. In this context, total DNA directly extracted from small fractions of suspected hallucinogenic mushroom was used in a PCR assay in order to amplify the internal transcribed region between the 18S- and the 28SrDNA gene, and the PCR fragment obtained was subjected to sequence analysis. From all the four samples tested, sequence analysis and comparison allowed to unambiguously identify the biological materials present in the culture medium as belonging to the hallucinogenic species Psilocybe mexicana (Accession number LN830951). These results, highlighted that a molecular-based approach, characterized by a total DNA extraction from suspected culture media, amplification and sequence analysis of a discrete region of the 28S rDNA gene, could be useful to disclose the presence of hallucinogenic mushrooms even if the size of the biological material is too small to allow a morphological identification.

A suitable LC/MS-MS method was developed and tested for the analysis of the active principles of mushroom seized on the illicit market, suspected to belong to the genus Psilocybe.

For the quantitative determination it was necessary to identify and synthesize a proper internal standard (IS, i.e., 5-hydroxy-N,Ndiethyltryptamine), endowed with chromatographic features suitable for the analysis of the active principles (Figure 4). Figure 4: Chromatograms for a) psilocin, b) IS and c) psilocybin.

Table 3: Concentrations of the active principles. 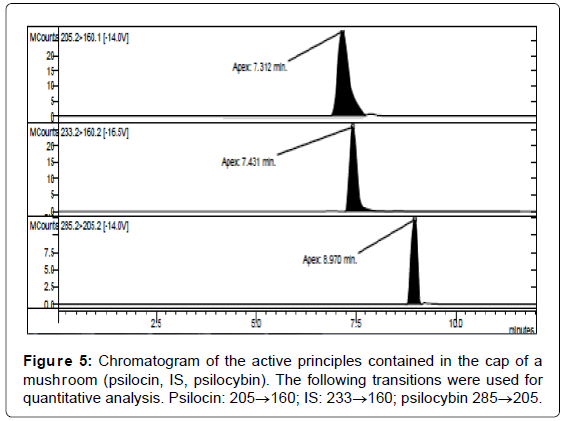 Figure 5: Chromatogram of the active principles contained in the cap of a mushroom (psilocin, IS, psilocybin). The following transitions were used for quantitative analysis. Psilocin: 205→160; IS: 233→160; psilocybin 285→205. 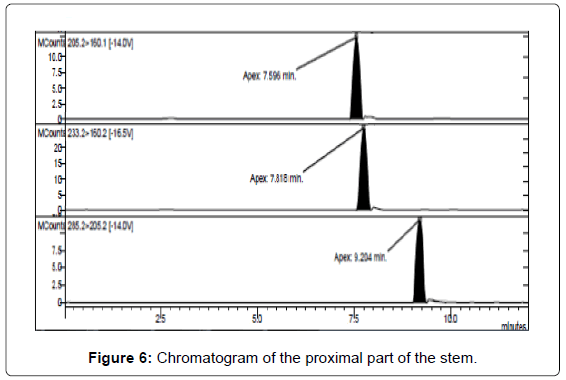 Figure 6: Chromatogram of the proximal part of the stem. 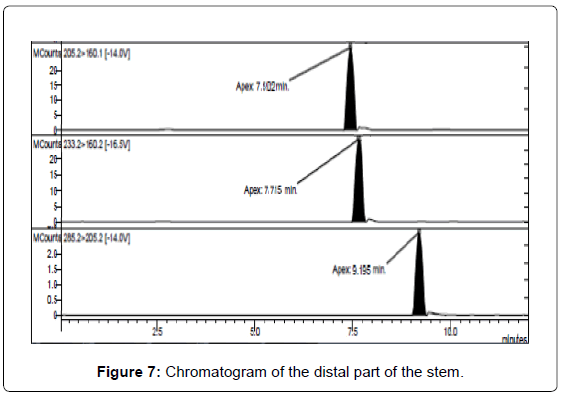 Figure 7: Chromatogram of the distal part of the stem.

The taxonomic identification of the biological material contained in the hallucinogenic mushrooms culture media, was carried out using a DNA-based approach, thus highlighting the usefulness of this approach in the forensic identification of illegal samples.

Moreover a LC/MS-MS method for the quali-quantitative analysis of psylocibin and psilocin was proposed and a proper internal standard (5-hydroxy-N,N-diethyltryptamine) was synthesized for the quantitative determination of the analytes in mushroom samples seized by the judicial authority.