This research probe centers on unravelling the cause of a perseverant disfigurement of a Zuma II entry route from the tectonic standpoint. Seismic, magnetometry, and gravimetry approaches are employed in the tectonic analysis of the region under investigation. Traffic and Satellite maps of Bwari and study area is generated; data of magnetic and gravity intensity against location are tabulated; eleven seismograms of Earthquake magnitude on the Richter Scale are produced; graphs of gravitational intensity and magnetic intensity each against distance, are plotted. Conclusions, robust enough for this analysis, are drawn. Magnetic intensity peaked as much as 58 μT indicative of electromagnetic radiation escape. The repeated 4.3 Richter magnitude scale readings is indicative of the fragility and motion of the region. The folds are indicative of intense tectonic activities within the subsurface.

Nigeria is becoming tectonically active owing to earth tremor occurrences and reportages by Akpan and Yakubu [1]. Abuja have had its fair share of the ground-shaking event and in other to reduce the future damages that this event could cause, it has become necessary to monitor tectonic activities within Veritas University entry route in Zuma II, Abuja. The entry route into Veritas University within Zuma II settlement deeply gullied, owing to concealed perseverant mainspring. Subsequent coatings and repairs could not annihilate the disfigurement on the route—buckles and folds are spotted. Seismometers, gravity meters and magnetometers are employed for analyzing the geotechnical assault to this route. Figure 1: (a) Traffic map (b) Satellite maps of Bwari and are under investigation within Zuma II. These maps are simply aerial views.

Earth tremor events are well documented [4-12], suggests from a multi-year analysis of Earth tremor that there is a continuous excitation of Earth normal modes by ocean storms; the work exposes unexplained spectral peaks within frequency band of 0.2–2 mHz; worldwide existence of such peaks reassessed. Dikedi [13] suggests that an abrupt frictional sliding occured between networks of fault lines; it was further suggested that there was a likelihood that friction was most intense at the rock slide site on N9027'21.516'' and E800'44.9993''. None of these research probes linked tectonic monitoring to road disfigurements. The current research work addresses how tectonic events could link to magnetic response and road failure.

The aim of this research work is to find a connection between seismic events and disfigurement within the Gabba II settlement, especially in the wake of varied tremors that have rocked varied sites in Nigeria, latest being Abuja, FCT.

Techniques employed include magneto-metric, gravi-metric and seismic techniques. Seismograms plots on the Richter scale are developed. Gravitational intensity in chl Gal over changing distance in m, is measured and recorded; Magnetic intensity in μT also over distance in m, was generated. 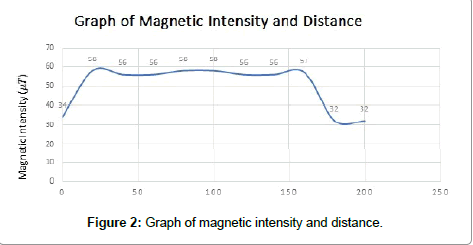 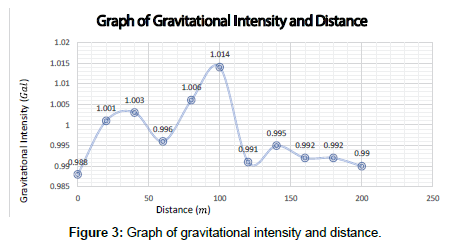 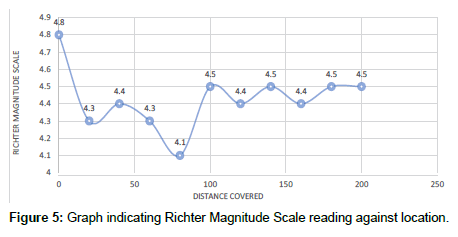 An observed sharp rise in magnetic intensity within 20 m at 9.2882° and 7.4175° and 160 m at 0.2893° and 7.4172° from the first location of measurement at 9.2882° and 7.4175° indicates the rich presence of electromagnetic radiation-this radiation probably escaped from the troubled, buckled and punctured regions of the route. Magnetic intensity peaked as much as 58 μT. Furthermore, within 20 m and 120 m from the start point, the average magnitude on the Richter scale showed repeated four-time reading of 4.5 within 100 m and 200 m at 100 m, 140 m, 180 m and 200 m. However, an anomalous magnitude reading of 4.8 on the Richter scale at the start point was observed. The gravitational intensity reading showed 0.988 Gal at the start point. However, this intensity reading peaked at 1.014 Gal at 100 m. The location at 9.2882° and 7.4175° is the lowest part of the route and the location 9.2889° and 7.4173°, 100 m from the earlier location is the highest part of the route. The Richter Magnitude scale readings in this research work is close enough to earth tremor magnitude scales. Indeed, shortly after the readings were observed, earth tremor events happened on September 5, 6 and 7 in Mpape, Maitama, Gwarimpa, Jayi, Jabbi, Katampe, Mabuchi, Utako, Wuye, Wuse 2 and Bwari regions of the FCT. The folds are indicative of intense tectonic activities within the sub-surface.

Copyright: © 2018 Dikedi PN. This is an open-access article distributed under the terms of the Creative Commons Attribution License, which permits unrestricted use, distribution, and reproduction in any medium, provided the original author and source are credited.