Present paper deals with the question whether the intense cyclones have become more frequent over the north Indian Ocean, especially in Bay of Bengal region, posing a more serious threat to the vulnerable coastal population of the region, and whether the temperature trend has backed and stimulated this trend. The results of the study, which has considered the data of 122 years of tropical cyclone frequency over the north Indian Ocean from 1891 to 2013, have shown that there is indeed a trend of enhanced cyclogenesis during four months- May, October, November and December, while November account for the maximum number of severe cyclone hit in the region. Temperature increase over the region has amplified this waxing trend of cyclogenesis alarmingly. The tracks of these cyclones indicate the weight of temperature rise over their intensity and movement and have shown shifting trend towards warmer regions of Andhra Pradesh and Tamil Nadu in recent decades.

Tropical cyclones are one of the deadliest natural disasters worldwide. The word ‘Cyclone’ was coined in 1848 by Henry Piddington, British meteorologist, and is derived from the Greek word ‘kuklos’ i.e. the coil of a snake as the air flow of the storm resembles it. The nomenclature of tropical cyclones is different in different parts of the world. In the Atlantic and eastern Pacific, they are known as ‘hurricanes’ and in western Pacific as ‘typhoons’. In the Indian region, they are simply known as ‘tropical cyclones’. Almost all these storms form within 25° latitude on both sides of the equator except over the 5°N to 5°S equatorial region.

The genesis of tropical cyclones over the Indian seas is highly seasonal, with primary maximum in the post-monsoon season (mid- September to December) and secondary maximum during the premonsoon season (April and May). A few cyclones form in transitional monsoon months June and September also. On an average about 5–6 tropical cyclones (maximum sustained wind of 34 knots or more) form in the Bay of Bengal every year, of which 2–3 reach severe stage (maximum sustained wind of 48 knots or more). The post-monsoon storms are more devastating in nature. The Bay of Bengal is a potentially active region for the formation of tropical cyclones. There are eight maritime states along the eastern and western coast of India that have deeply suffered from tropical cyclones (Figure 1), out of which the eastern coastal states- Orissa, Andhra Pradesh, Tamil Nadu and West Bengal, have suffered the most (Figure 2). 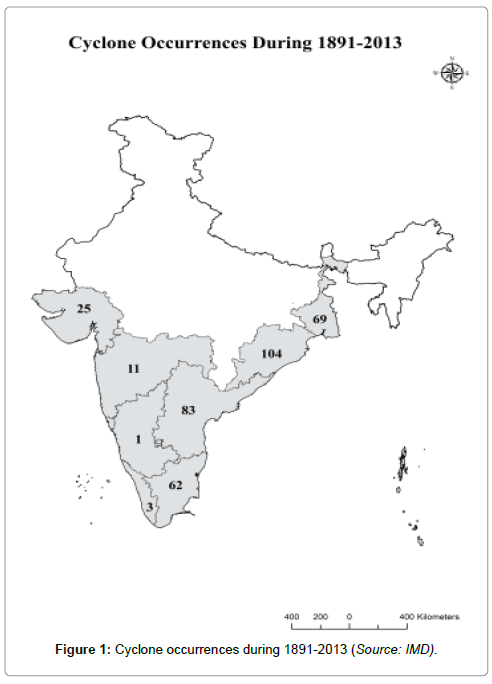 Some of disastrous tropical storms of the 20th century include the Orissa Super Cyclone (October 1999), Kandla cyclone (1998), Porbandar cyclone (1976), Bombay cyclone (1948). The False Point Cyclone (Orissa) which occurred in 1885 was reported to be associated with the highest storm surge of 22 ft.

It is seen that the maximum number of severe cyclones in the north Indian Ocean is during November. On average, one cyclone is expected to form in November every year. November cyclones generally move westward to west-north-westward and strike the Orissa, Andhra Pradesh or Tamil Nadu coasts of India. Occasionally, these cyclones move northward and recurve north-westward to strike the West Bengal coast. November cyclones account for the highest number of natural disaster deaths in India. Therefore, any shift in their frequency and path is of paramount importance to Coastal States of India.

Table 1 shows that the trend in the November cyclone frequency over the Eastern Coastal States for past 122 years has been +0.63, implying that about one more cyclones is forming in every two-year period in this region during the month, compared to the corresponding frequency 122 years ago. This trend is significant at 99 percent level, but the practical significance is even more important.

Although a study over shorter periods by Nicholls, Landsea and Gill [4] show slightly different results and they suggest to separate apparent trends created by better observing techniques or even by changes in definitions of tropical cyclones, from real trends. Another study of Mooley and Mohile [5] found an (apparent) increase in cyclones during 1965–80, compared to earlier decades, and attributed it to better detection by satellites.

However, it would not be correct to link the increasing trend to satellite monitoring or advancement in instrumental techniques, as the positive trend has been very consistent. As revealed by Table 1, the tropical cyclone occurrence during July has shown significant decreasing trend. Time-series of cyclone frequency shows that the current rising leg has started from late 1950s, much before the satellite era. Similarly, 1920s have witnessed another spurt in the cyclone frequency. Thus the trends cannot be attributed to advancement of monitoring techniques.

Recent studies suggest that cyclone activity over the North Indian Ocean (NIO) has changed over the second half of the 20th Century [6-13]. General features include a pole ward shift in storm track location, increased storm intensity, but a decrease in total storm numbers and also the ocean response in the weak of cyclone. Sea Surface Temperature (SST) is a fuel to tropical cyclones for their genesis and intensification. Global warming heats both the sea surface and the deep water, thus creating ideal conditions for a cyclone to survive and thrive in its long journey from tropical depression to Category Four or Five superstorm. SST increasing is so fast and high in the equatorial Indian Ocean compared with other the oceans. It has increased 0.6°C over the NIO since 1960, the largest warming among the tropical oceans [11]. Recent increase in severity of tropical cyclones in Bay of Bengal region is being attributed to the increase in SST. Observational records indicate for a decline in the number of depressions over the Bay of Bengal since 1976 and various factors are attributed to this trend that includes weakening of the low-level westerly flow over the Arabian Sea [14], decrease in the horizontal and vertical wind shears as well as in moisture and convection over the Bay of Bengal [15,16].

Vertical wind shear and high static stability has an adverse influence on tropical cyclone formation and on cyclone strength and longevity [17-19]. Joseph and Simon [14] indicate that low level jet stream associated with Indian summer monsoon over the NIO is weakening in recent years, which reduces the vertical easterly shear and thus it is favorable for the formation of more intense tropical cyclones. In the NIO, vertical wind shear is determined by gradients of SST both locally within the ocean basin and remotely from the Indo-Pacific [18]. High static stability suppresses deep convection during cyclogenesis and reduces the potential intensity [20,21] of organized cyclones. The contrast between SST and upper tropospheric air temperature decides the stability of the cyclone.

Although SST is the primary cause of cyclogenesis, tracks of past severe cyclones indicate a noticeable influence of coastal surface temperature on their intensification and shifting. Figure 3 shows that the areas which are experience more warming trend in eastern coastal region of the country are facing more severe cyclone strokes increasingly. While before 1960 the northern part of Orissa and West Bengal were facing more cyclones, after 1960 the Andhra Pradesh and Middle and Southern Orissa have become more cyclone prone. This region has registered the maximum cyclone hit during 15 October to 25 November in 122 years study span. The month-wise correlation trend between temperature and time series (1901-2013) of the cyclone prone districts of the four eastern coastal states have been shown in Figure 4. Figure 4: Correlation trend between temperature and time series (1901-2013) of the cyclone prone districts of the four eastern coastal states. Based on: District Level Temperature Records, IMD.

These districts show very significant warming trend and the warming is more prominent in March-April and September-December. Although Most of the districts of Orissa and West Bengal show cooling trend during April-July, coastal districts of Andhra Pradesh and Tamil Nadu are warmer all over the year.

This enhanced but uneven temperature rise over the coastal region generates suction to the cyclone and thus cyclone deflects from its natural path towards warmer region to gather this extra entropy. These conditions help in enlarging the diameter and inland reach of the cyclone thereby intensifying the severity of the cyclone and the regional vulnerability. A perusal of Table 2 shows that while West Bengal has not faced any cyclonic disturbance during the past decade, Tamil Nadu and Andhra Pradesh has experienced most of the cyclonic events. This trend indicates the influence of local warming on cyclones.

Evidently the cyclone vulnerability of the two states- Tamil Nadu and Andhra Pradesh is increasing. These states inhabit heavy population percentage in coastal districts, and therefore, special mitigative measures have to be established to confront and minimize the damage. Needless to say that the heat contributing agents- urbanization induced heavy vehicular emission and industrialization is to be managed ecofriendly to minimize the intensity of cyclones. Furthermore, rapid growing population- especially urban, in the coastal areas, has to be regulated to combat this disaster effectively.

Tropical cyclones can cause a variety of damages. The major causes of destruction are strong winds, heavy precipitation and storm surges. The Indian Sea tropical cyclones with climate change perspective clearly show that though the occurrence of tropical cyclones declining, the frequency of severe cyclonic storms is increasing noticeably. Significant temperature rise over the coastal areas have further accentuated this trend.

Although contrary to common perceptions, greater vulnerability to tropical cyclone damage in Eastern coastal states of India and more specifically in Odisha and Andhra Pradesh, is mainly due to economic and demographic, not meteorological factors. Rapid urbanization and thick industrial cover in the coastal areas have contributed in warming of the region significantly. The distinction between meteorological and socio-economic causes for the increased impact is important, to avoid a tendency for political and administrative decision makers to blame natural causes. They have to take these realities into account, not just in developing a vigilant disaster management system, but in land-use planning, development of coastal districts, and insurance measures. Improvements in warning systems and in disaster management remain critical to mitigating the loss of lives and, to some extent, the damage.

Copyright: ©2014 Mishra A. This is an open-access article distributed under the terms of the Creative Commons Attribution License, which permits unrestricted use, distribution, and reproduction in any medium, provided the original author and source are credited.